A gripping race to the Scoring Gate unfolded during the third day of Race 6: The Wondrous Whitsundays Race which ultimately saw Sanya Serenity Coast come out on top followed closely by Visit Seattle in second and Qingdao, which has scored points in every Scoring Gate so far, in third.

For its efforts, Sanya Serenity Coast, which is also in first place on the leaderboard today, will pick up three bonus race points. Skipper Wendy Tuck, who has led the team to score points in four of five Scoring Gates so far, said: “Last night saw us cross the Scoring Gate, closely followed by Visit Seattle and Qingdao - well done Nikki and Chris.

“I do feel for the pink boat (Liverpool 2018), as soon as we crossed the Scoring Gate the wind changed completely making all near impossible for them to get through ahead of Qingdao.” 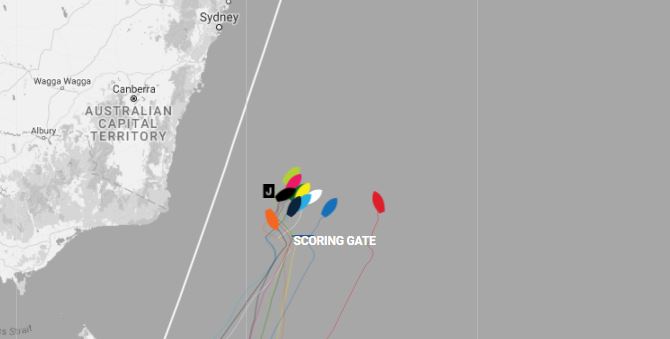 Visit Seattle claimed second place in the Scoring Gate and will pick up two bonus race points, but currently sits in fifth place on the leaderboard. Close competition kept the team on its toes throughout as Skipper Nikki Henderson explains: “It was touch and go for a while as to who would make it through - us, Qingdao or Liverpool 2018.”

Qingdao, which has proved to excel at picking up Scoring Gate points, was the third team to cross the virtual line, earning one extra race point, but sits in fourth place on the leaderboard today. Skipper Chris Kobusch reports: “We did it again. Another Scoring Gate, another point. This is our fifth consecutive Scoring Gate and the streak is unbroken.

“It was super close this time, though. The long downwind run allowed us to catch up with the rest of the fleet, but just before we got to the gate the breeze died and it was a struggle to get to the virtual line.”

Liverpool 2018, which sits in third place today, narrowly missed out on Scoring Gate points, but maintains its high leaderboard position. Speaking from on board, Skipper Lance Shepherd says: “We chose to forego all of our hard efforts in pushing slightly north east to the gate and instead chose to follow the wind and keep heading further north in an attempt to maintain our position in the fleet.

“It was a hard choice but frankly I think it was worth it as it has allowed us to stay close to the front of the pack.”

Garmin, which is the only team to have played its Joker, is in second place after deciding to forego the Scoring Gate in favour of leaderboard positions in a move that Skipper Gaëtan Thomas hopes will pay off further ahead.

The overall mood amongst the fleet is somewhat split during the third day of racing; some teams seem to have escaped the worst of the forecasted light winds whilst others are feeling frustration as they work hard to tackle light wind patches.

Light wind conditions have kept HotelPlanner.com, which sits in sixth place, GREAT Britain, in seventh place, and Dare To Lead, in eighth place, from making fast progress but the teams are making the most of the light weather.

HotelPlanner.com Skipper Conall Morrison is using the light breeze and lack of boat heel to continue maintenance whilst Andy Burns, GREAT Britain Skipper, reports: “Everyone seems to have fully forgotten about the upwind endured during the first few days and have adapted without complaint to the light wind conditions.”

Towards the back of the fleet, Nasdaq currently in ninth place, is feeling frustrated after a series of unlucky wind holes has hindered progress but on board Unicef it seems that weather conditions are somewhat different. Unicef Skipper Bob Beggs reports: “Another day of reasonable progress mainly pointing in the right direction, hurrah! The wind holes threatened in the weather forecast have yet to affect progress for Unicef so fingers crossed we will pass through unscathed.”

Further out east, PSP Logistics has some ground to make up after a strong tactical move failed to pay off. Skipper Matt Mitchell explains: “We came all this way for what was forecast to be the most stable wind-avoiding wind holes and such like but it's been anything but!

“We are to the degree where we planned to be and events haven't transpired as we thought they would, still, that's why they call it a forecast I guess!”

Looking ahead, Clipper Race Meteorologist Simon Rowell forecasts a breeze to fill in, albeit from the north, during the coming hours which will be welcomed by all and should help the fleet to progress up the coast. With the Scoring Gate now out of the way, focus will soon turn to the upcoming Elliot Brown Ocean Sprint as this tactical race continues.

A mixed bag of conditions has kept the fleet very busy during the second day of racing in Race 6:…

Overall Clipper 2017-18 Race leaders Sanya Serenity Coast has had the perfect start to Race 6: The Wondrous Whitsundays Race from Hobart, Tasmania, to Airlie Beach in the Whitsundays.It was an earlier start than usual for the Clipper Race fleet, who began slipping lines at…

Race 6: The Wondrous Whitsundays Race may only be six hours into its journey but some divisive early navigational choices…

After a thrilling Sydney Hobart campaign for the Clipper Race fleet, teams have been using the New Year period to…