For the sixth day in a row Qingdao maintains its lead over the rest of its competitors, at the front of the Clipper Race fleet as the leading pack turns to the west for the final 700 nautical miles to Sanya. The teams are concentrating on maintaining focus, working hard and holding their spinnakers whilst navigating the busy waters of the South China Sea.

On board Qingdao Skipper Chris Kobusch reports: “PSP Logistics is hot on our heels though and Sanya Serenity Coast plus Dare To Lead are closing in too. 640nm to the finish and again the racing is incredibly tight. Every little mistake can cost a position, but hopefully we can stay focused and concentrated on the home stretch and, with a little bit of luck, a podium position might be in sight. Fingers crossed!”

PSP Logistics is close behind and around 50 nautical miles is all that separates the two teams after 19 days of racing. Despite reporting that the team faced some interesting conditions last night including a lumpy sea state, the Skipper, Matt Mitchell, said: “Progress is good and we are pointing in more or less the right direction. The next few days will tell though as I don't think any of the leading boats can sail directly to Sanya, meaning both gains and losses will be made on the gybe angles that we choose to take.”

Dare To Lead retains third place and a potential podium finish. Skipper Dale Smyth said: “Well a good fast night under spinnaker after the wind came through from the north east. We are currently approaching the north end of the Philippine Islands and nightfall should see us through into the China Sea and around 700 nautical miles left.

“It feels like it’s getting close now but we still need to keep concentrating and keep our focus up for the last few days.” 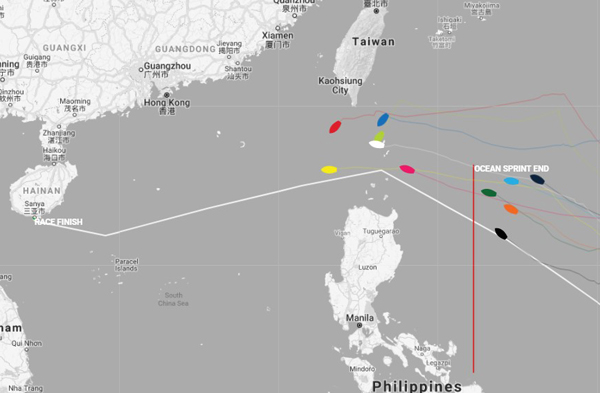 For Sanya Serenity Coast, currently fourth, the hope for a podium finish into its home port is still within reach. Skipper Wendy Tuck said: “We are now on that final run for the finish. We do have our work cut out for us to catch those boats in front of us, but we never give up and the team is pumped to give it their best shot. Morale is great on board, everyone is working well and the boat is sailing well.”

The steady winds from the north have meant settled conditions for the most northerly yacht, fifth placed Unicef. Only the next few days will tell whether its positioning pays off for the downwind run to Sanya compared to that of Liverpool 2018 over 100nm to the south, in sixth.

The chasing pack is still in the midst of the Elliot Brown Ocean Sprint. Visit Seattle, though leading the charge in seventh, is only just breaking free of the wind hole that hampered progress yesterday. Skipper Nikki Henderson said: “Another sprint - aka another driftathon. We have just started edging forwards after 12 hours in a hole.”

Garmin has opted to activate Stealth Mode and so is hidden its position from its competitors until 0600 UTC on Monday morning and means HotelPlanner.com moves into eighth on the leaderboard.

For Nasdaq (ninth) and GREAT Britain (tenth)however, the later start to the Elliot Brown Ocean Sprint has meant that they are experiencing better conditions than some of the fleet. Nasdaq Skipper, Rob Graham, said: “We've been having a good run across our Elliot Brown Ocean Sprint: we started last night under Code 1 (lightweight spinnaker), then the wind filled in from the north east for us and we're trucking along under the Code 3 (heavyweight spinnaker).”

GREAT Britain Skipper, Dave Hartshorn, is also pleased with his team’s progress and is holding hope to pick up some of the bonus points on offer, saying: “Now on an athletics track, you would not want to be last out of the blocks for a sprint, however beginning the last boat over the start line on this occasion may have its advantages. Time will tell, as the winds look pretty consistent for the next 30 hours or so with good wind speeds and angles.”

Clipper Race Meteorologist Simon Rowell reports that the north easterlies are coming through now and over the next 24 hours they should veer and ease. For the yachts still east of the Luzon Strait, they will see this affect more so than those to the west. Then as the high-pressure system, that is driving the wind, goes further east it will leave less steady breeze for 2-3 days before the next batch fills in again.

Keep up to date with how the latest weather conditions are affecting the fleet via the Clipper Race Viewer and hear more from the Skippers and crew on the Team Pages.

Race 7: The Forever Tropical Paradise Race will finish in Sanya Serenity Marina in Sanya, and the latest Estimated Arrival Times can be found on the Clipper Race website. With the finish line less than 1,000 nautical miles away, crews are excited to explore Sanya and all it has to offer during the stopover, and you can find out more here.

The first teams have crossed the end gate of the Elliot Brown Ocean Sprint on Day 18 of Race 7:…

Happy Chinese New Year from the Clipper Race! As celebrations get underway on land, the Clipper Race fleet counts down the miles during the last stretch of Race 7: The Forever Tropical Paradise Race to Sanya, China. Teams have been getting into the spirit…