The light wind lottery that got Race 8: The Sailing City Qingdao Cup, underway yesterday from Sanya, has continued overnight, with the teams out east taking the early jackpot as they do their best to escape north, knowing that tougher, upwind conditions, await.

The previous race winner, PSP Logistics, and Sanya Serenity Coast have been the early wind winners, currently leading the fleet just 0.3 of a nautical mile apart from each other, in the east.

Matt Mitchell, Skipper of PSP Logistics, in first place, reports: “The first 24 hours haven't gone too badly at all with a good start seeing us pretty much leading the whole way of the inshore course before heading out to sea. Last night there were very light and fickle winds meaning the light wind lottery was very much back in action. Thankfully we were one of the boats that fared better as we are now part of the leading pack heading into the South China Sea.

“We have a mixed bag of weather coming up as over the next 24 hours the wind will change from the nice spinnaker sailing that we have now, to light headwinds, and then build to strong headwinds later in the week. It will be interesting to see how each of the boats handles this first bit of the race as positioning is everything on our way towards Taiwan.”

Explaining her decision to play her Joker Card in this particular race, Sanya Serenity Coast Skipper Wendy Tuck says: “We have played our Joker Card in this Leg for a couple of reasons. We usually do well in the shorter races and we usually do well in the upwind stuff, there should be plenty of the upwind stuff in the next couple of days, so fingers cross our Joker doesn’t become a bad joke.”

At this early stage however, Skippers know that the race is all still to play for and a number of close battles have already started within the fleet, making for intense efforts on board.

Ten miles behind the leading two teams, also positioned in the east of the fleet, GREAT Britain is third, with Unicef less than half a mile further apart in fourth, with Liverpool 2018 sitting just over two nautical miles behind in fifth.

Unicef Skipper Bob Beggs says: “The race got off to a light wind start, which we thoroughly enjoyed yesterday. We were however treated to an impromptu wind hole overnight, causing the fleet to park up, and we are now crawling away under lightweight (Code 1) spinnaker, hopefully making our escape.

“The wind is due to head us shortly and the long beat to Qingdao and winter will begin in earnest. The upright sailing we are enjoying today will soon come to an end as we start to head north. The Unicef crew are ready and looking forward to the challenge.”

In sixth place, just over 3nm behind, Visit Seattle is positioned in the centre of the fleet. Feeling a little unlucky following an early tactical decision, Skipper Nikki Henderson explains: “We had a great start - if slightly hair raising on the line - we sailed well and rounded the mark by the statue in second place. The crew worked super well. Definitely a competitive atmosphere onboard for this one.

“Unfortunately, things went downhill after that and it's been a frustrating night. We tacked too early and headed north, right into a wind hole. About two hours ago it started to fill in which is a relief - but sadly we have had to watch PSP Logistics and Sanya Serenity Coast sail off into the distance, with Liverpool 2018 and Unicef not far behind them. We are working hard to keep sailing fast - and I'm working on trying not to beat myself up for a poor decision yesterday.”

The back half of the fleet is further west with HotelPlanner.com the furthest south of the chasing teams, in seventh (orange). Meanwhile, Dare To Lead (eighth - white), Qingdao (ninth - yellow), Garmin (tenth - black) and Nasdaq (eleventh - light blue) are all within six nautical miles of each other a little further north closer to the rhumb line (white line - the shortest calculated route to finish). 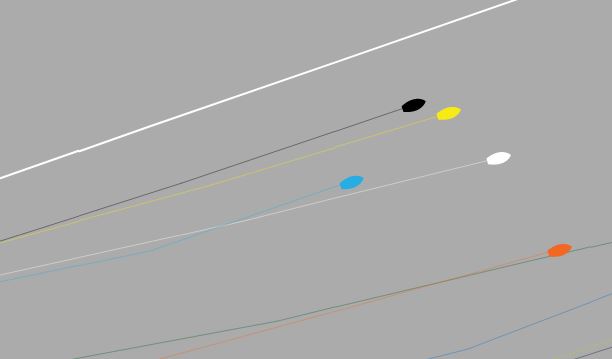 Dare To Lead Skipper Dale Smyth is also giving himself a hard time for making the wrong decision early on as he says: “A couple of bad tactical choices on our part has put us right towards the back of the fleet despite a fairly decent start, but anyway we live to fight on.”

It’s not just the light winds that are causing teams a headache however. Teams have also been on high alert to avoid the local fishing fleets, causing Dale to add: “Last night was painfully windless with hundreds of fishing boats. We went over a buoyed line and managed to pick up a fishing float around our rudders so lookout here is absolutely critical! We are still fighting very little wind and trying to eke as much as we can out of our boat.”

The fleet still has over 1,500nm of its journey to Qingdao to go and the teams have covered between 45 – 70 nautical miles in the last twelve hours. Despite the slow speeds due to the light and variable winds which has seen progress at around eight knots, life has been busy on board with many tacks required to navigate around the fishing fleets and wind holes.

Teams are also enjoying the warm temperatures and using the flatter conditions as a nice, easy way to settle back into life on board as they know before too long that they’ll be heading back to life at an angle when the North Easterly Trade Winds kick in and temperatures on board will plummet as they get closer to Qingdao.

Keep up to date with how the winds affect the fleet via the Clipper Race Viewer and hear more from the Skippers and crew on the Team Pages. You can also view the spectacular images of the race start in Sanya on our Gallery.

Tomorrow, Sunday 4 March, sees the Clipper Race fleet take back to the water for the start of the eighth of 13 stages which make up the Clipper 2017-18 Race series; Race 8: The Sailing City Qingdao Cup.Race day will get underway at 1100 local…

The inaugural Clipper Race Sanya Serenity Coast In-Port Regatta has been one to remember, with Liverpool 2018 leading from start to finish to take victory.Hundreds of thousands of people all over the world were able to watch the first ever Clipper Race Sanya…