The best insights into life on board can be found in the musing of the Clipper Race crew who are encouraged to blog about their experiences at sea. From poems to essays about cooking and cleaning, helming and navigating, and even the unspeakable heads, their witty and insightful reflections mean those following from home can get a sense of life racing around the world.

This time of year would ordinarily have seen the fleet taking on Leg 7, the penultimate leg of the circumnavigation. The US Coast-to-Coast Leg continues to be one of the most popular stages. Sailing from West Coast USA, down to the engineering marvel that is the Panama Canal and up the East Coast, crew experience a host of varied conditions and a vast array of wildlife.

During Leg 7 of the Clipper 2017-18 Race, a circumnavigator Nell Wyatt wrote the following diary entry - Squid and Rotten Eggs, when she was sailing from Seattle to Panama. Whilst many days at sea are high octane, there are some that allow you to take stock of your surroundings.

‘There is a certain ignominy when your 70 foot racing yacht is overtaken by an 8cm squid swimming past you. It puts into perspective what a tiny cog we are in this huge wheel of life at sea.

We were sitting drifting slowly in yet another wind hole (these seem to have been a core feature of our round the world race) a couple of mornings ago about 0530, witnessing the glassy calm sea turning orange and then pink as the huge deep rose pink orb of the sun peeked above the horizon and turned the sky and clouds pink. Of all the sunrises and sunsets I have seen since we left Liverpool in August, this was the most extraordinarily beautiful.Three dolphins appeared in formation slowly swimming towards us in the silvery pink sea directly in the line of the sun's reflection in the still water – they curved and swooped in unison towards us, swimming with such calm gentleness that they barely formed a ripple. The air was so still you could hear them exhaling as they swam towards us. A few minutes later as they came closer to our slowly drifting yacht, they all dived simultaneously and were gone. 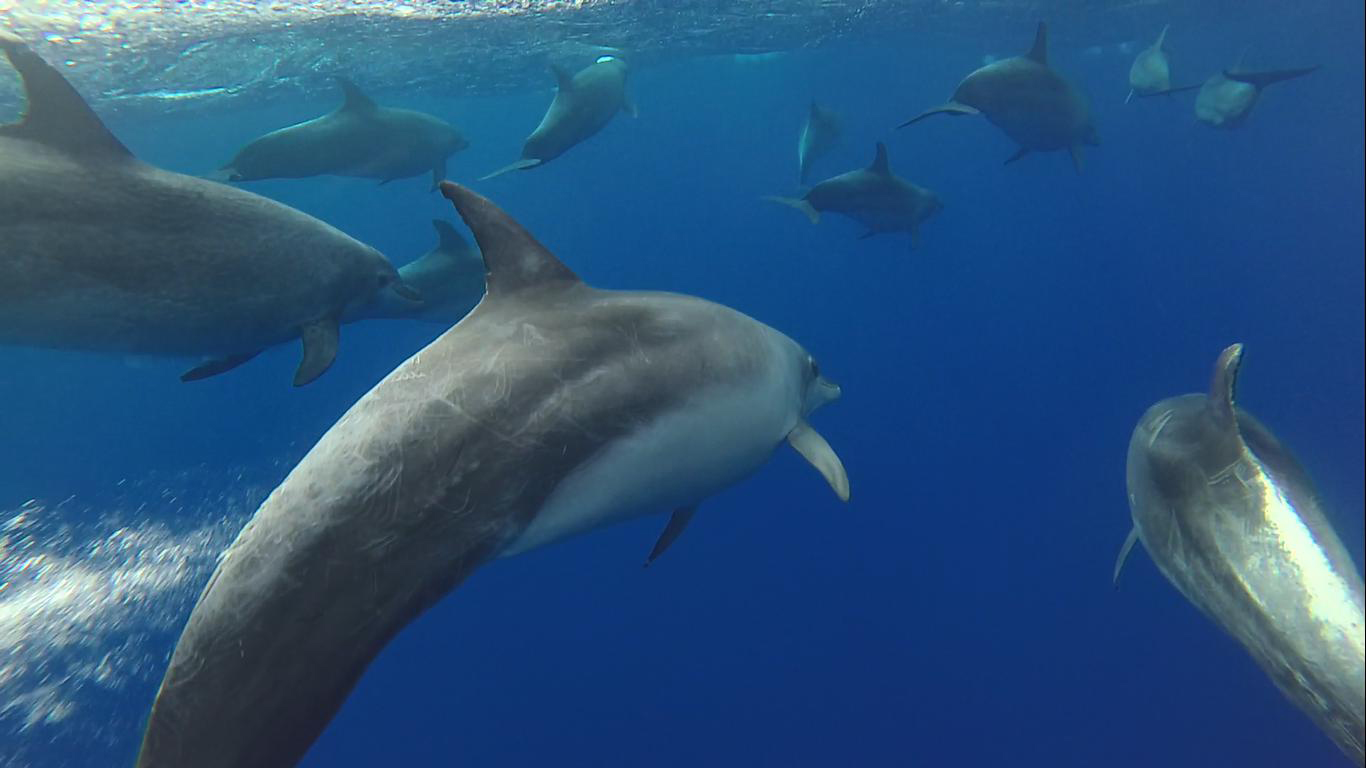 Looking over the side of our boat I could see luminescent small globules of turquoise phosphorescence drifting past us in the depths of the intense blue of the ocean. I was gazing at this amazing scene and revelling in the peace and quiet when the solitary squid in question swam past us and with a nonchalant wiggle of his hips and a flick of his tentacles overtook us without so much as a second glance.

A few minutes later, a small turtle swam towards us, poked his head above the water, had a look at us drifting slowly, lifted his flipper and with a small wave swam off into the distance once again leaving us stationary in his wake.

Wind holes might be stressful and frustrating when you are racing, but how often in your life will you be overtaken by a very small squid?’

'Life on a Clipper Race Yacht is seldom predictable or relaxing.A week or more ago, a rather exuberant wave caused several boxes of our innumerable eggs to bounce out of their rigid plastic containers and land on the floor smashing several all over the floor and cracking multiple eggs still contained in their boxes. We managed to rescue 29 of the cracked eggs and had an impromptu very egg-based breakfast the following morning. We packed up the intact remaining eggs more carefully with a lot more padding and felt a bit more relaxed about their future until we noticed an increasingly strong and unpleasant smell near the forward heads that got stronger and more pungent day by day.

On day three, the smell was so unspeakable a bit of investigation was needed to find the origin. I had the misfortune of being on chef duty that day so elected myself as Chief Investigator. What a mistake that was! After sniffing my way to the area in question I found multiple rotting leaking and broken eggs that had been missed in the original egg carnage. In the heat we are currently experiencing the smell was unspeakable even after washing and disinfecting the plastic containers and individually washing and drying the remaining 240 eggs and throwing away their rotten friends.This is not a feat I would like to repeat on a sailing yacht, which was sailing along in relatively flat seasat the time but was certainly not flat or stationary and which kept gybing during the whole process so that the eggs that were being washed and dried kept rolling along the work surfaces, threatening to join their friends on the floor and repeat the whole scenario again. It has taken a few days for the smell to dissipate.Thankfully the area in question smells as fragrant as a blossom again but when I think of the infection risk in this heat I am astounded that we managed to avoid serious rotten egg-based infections afflicting the majority of the crew. Phew! A lucky escape indeed. In fact I am amazed that we haven't had more broken eggs on the race so far considering the sea states we have encountered. 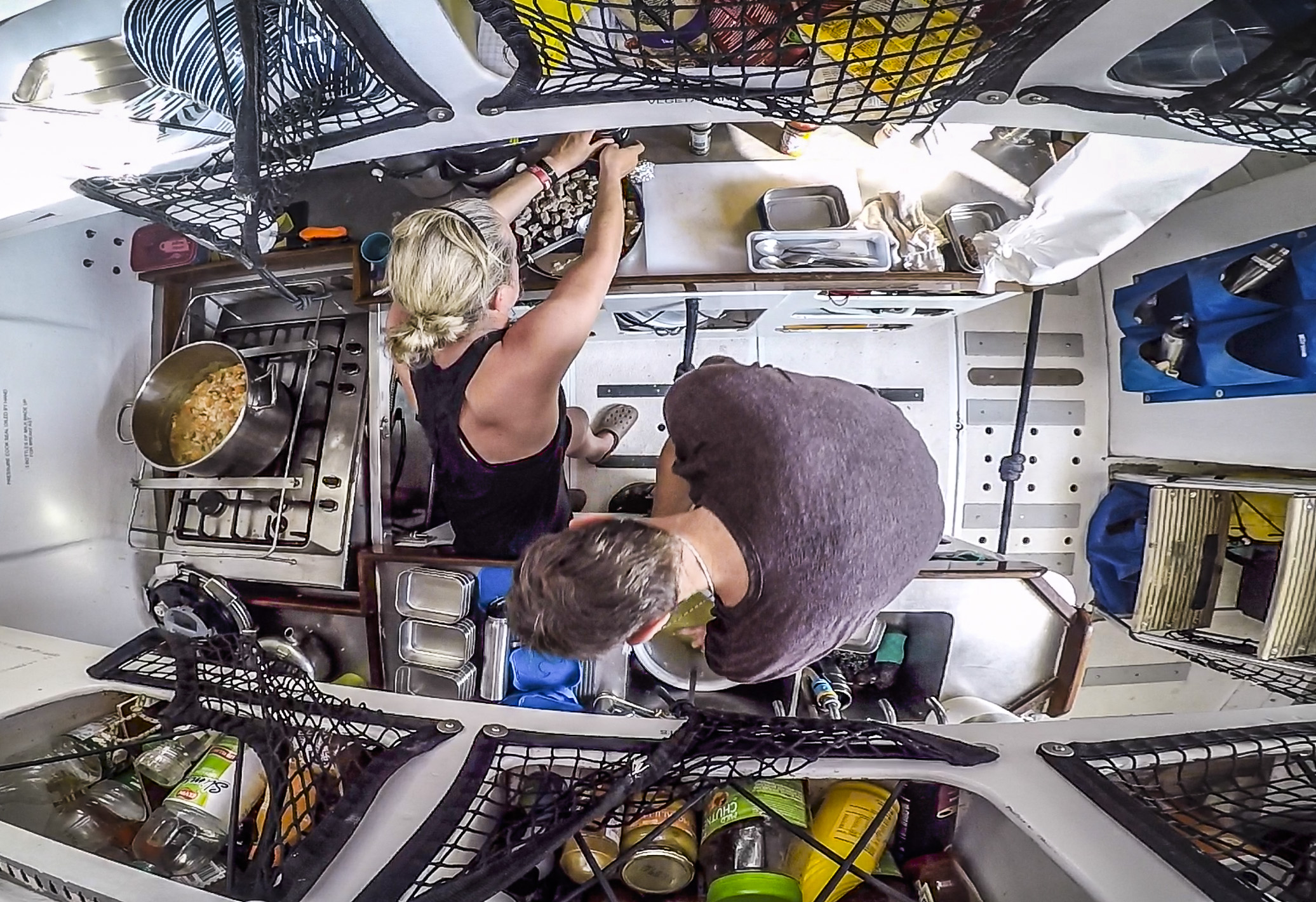 Image: Birdseye view of the galley

The moral of this story is don't offer to find the origin of an unidentified unpleasant odour in the tropics!

We are coming towards the end of this race from Seattle to Panama as the winds get lighter and more variable and the whole fleet converges to the frustration of those that have led from the start. We are approaching the second compulsory gate and rumour has it that this is where the race will end and we will then have a very long motor to Panama, refuelling en route in Costa Rica. With only a few miles now between the first eight boats we are all fighting to gain even 0.1 of a knot of speed with every puff of wind endeavouring to creep towards a podium finish. A game of snakes and ladders when a gybe can win or lose you miles if the wind unexpectedly backs or veers against predictions or if the helming or trimming of sails is not optimal.

Sometimes we see a yacht only a few miles away sailing 2-3 knots faster or in a different direction apparently in a different weather system from us. This can be frustrating at times when you are doing everything possible that you have learned over the past few months to get the boat to sail faster and nothing seems to work and then other times the tables are turned and you are whizzing through the water like a zephyr in the wind whilst your competitors may not be. 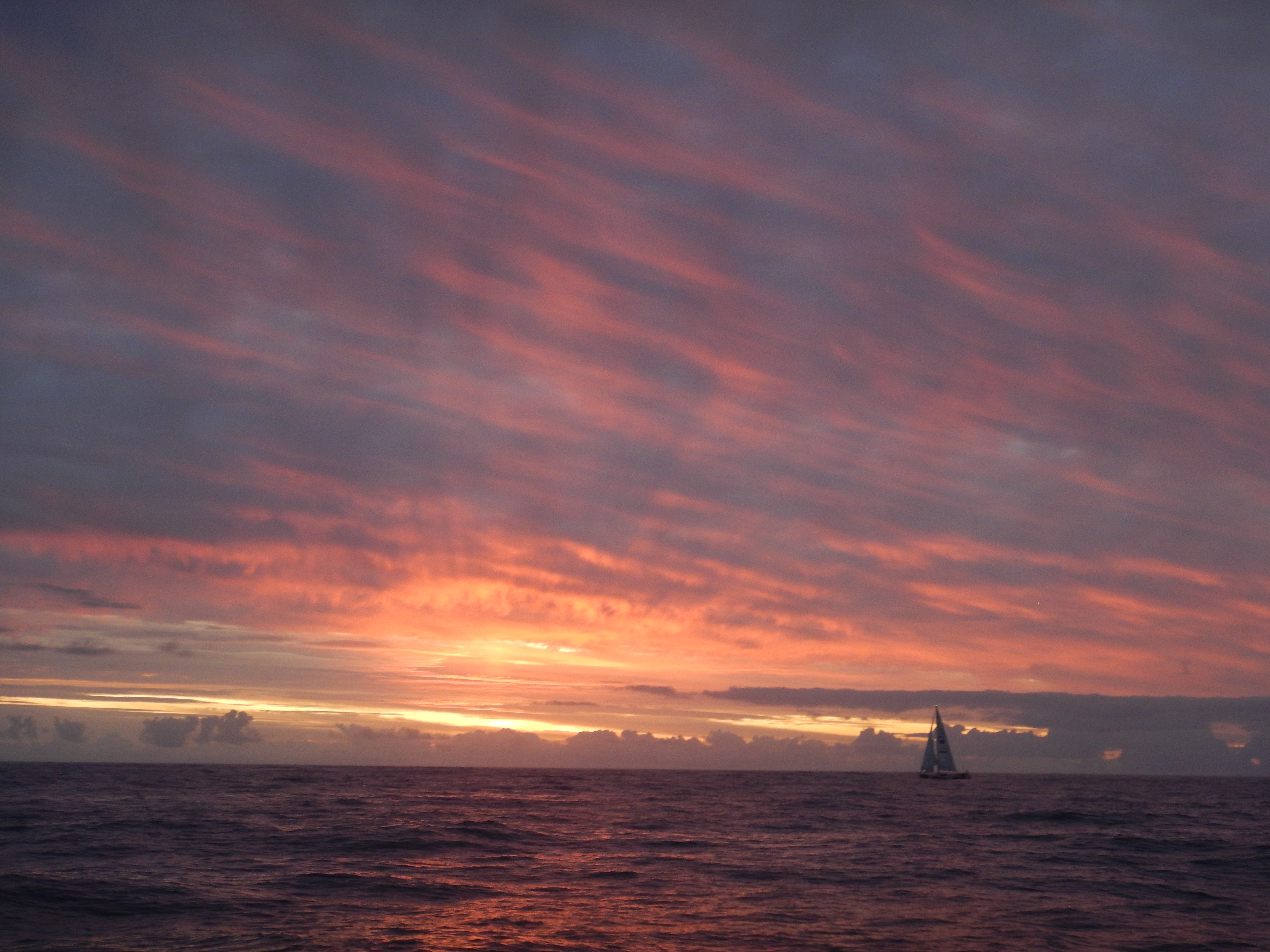 It never ceases to amaze me seeing how close together the fleet is now after 3000+ miles with only a few miles separating us. It is both tantalising and tormenting and the whole team is working hard together to get the very best result that we can.

This rather random blog summarises how small things can become so important when your world is a 70 foot yacht–a bubble of phosphorescence, a dolphins breath, a rotten egg or a solitary squid. All are memorable in their own way and each has played a part in making this year extraordinary and special (if at times very smelly).