One of the last stops before Race Finish, Host Port Derry~Londonderry has built a solid reputation for putting on a party to remember. The Clipper Race has a strong legacy with Derry~Londonderry, with the fleet visiting the Northern Irish city for four consecutive editions. The currently postponed Clipper 2019-20 Race would have made it five and therefore the most visited European city in the 24 years that the Clipper Race has been running. 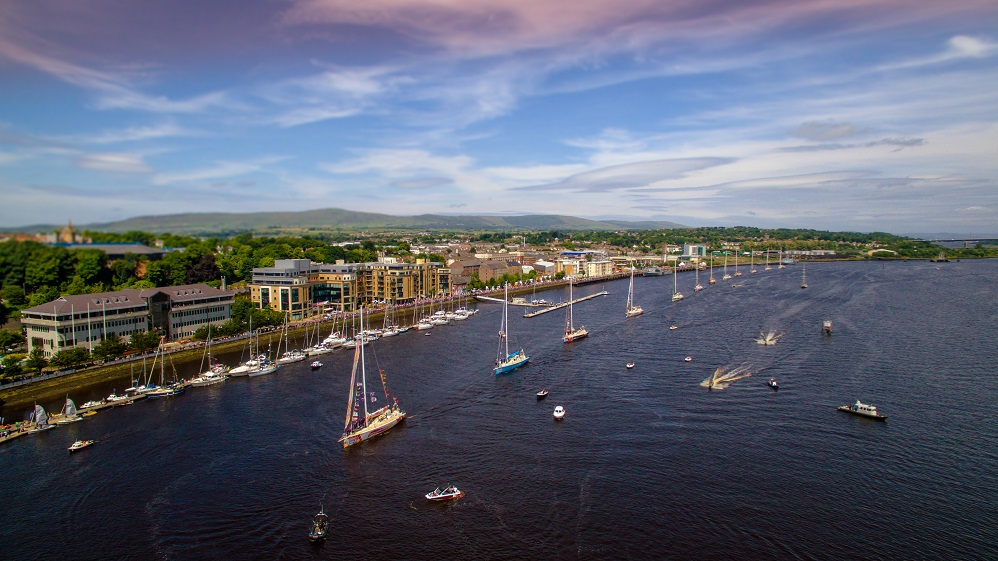 With a reputation amongst Race Crew and Supporters for its hospitable and party atmosphere it makes Derry~Londonderry one of the most anticipated stopovers on the race route. This week, under normal circumstances, the global sailing event would have been enjoying the ‘craic’ of the Foyle Maritime Festival as part of the Derry~Londonderry stopover. The Foyle Maritime Festival transforms the Foyle Port into an international marina and both sides of the rejuvenated waterfront host a packed lineup of entertainment, education, along with food stalls and on the water activities. A record 220,000 visitors throng the riverpath, enjoying the festivities, touring the Clipper 70s, with the week leading up to a huge finale event on the River Foyle.

The Derry~Londonderry stopover is an opportunity to celebrate the race coming towards the end and there is a huge buzz amongst crew and supporters as it approaches. A high percentage of friends and family travel from all around the world to the city, along with Race Crew alumni who return year after year, to relive their own experiences of being welcomed into the city as heroes. 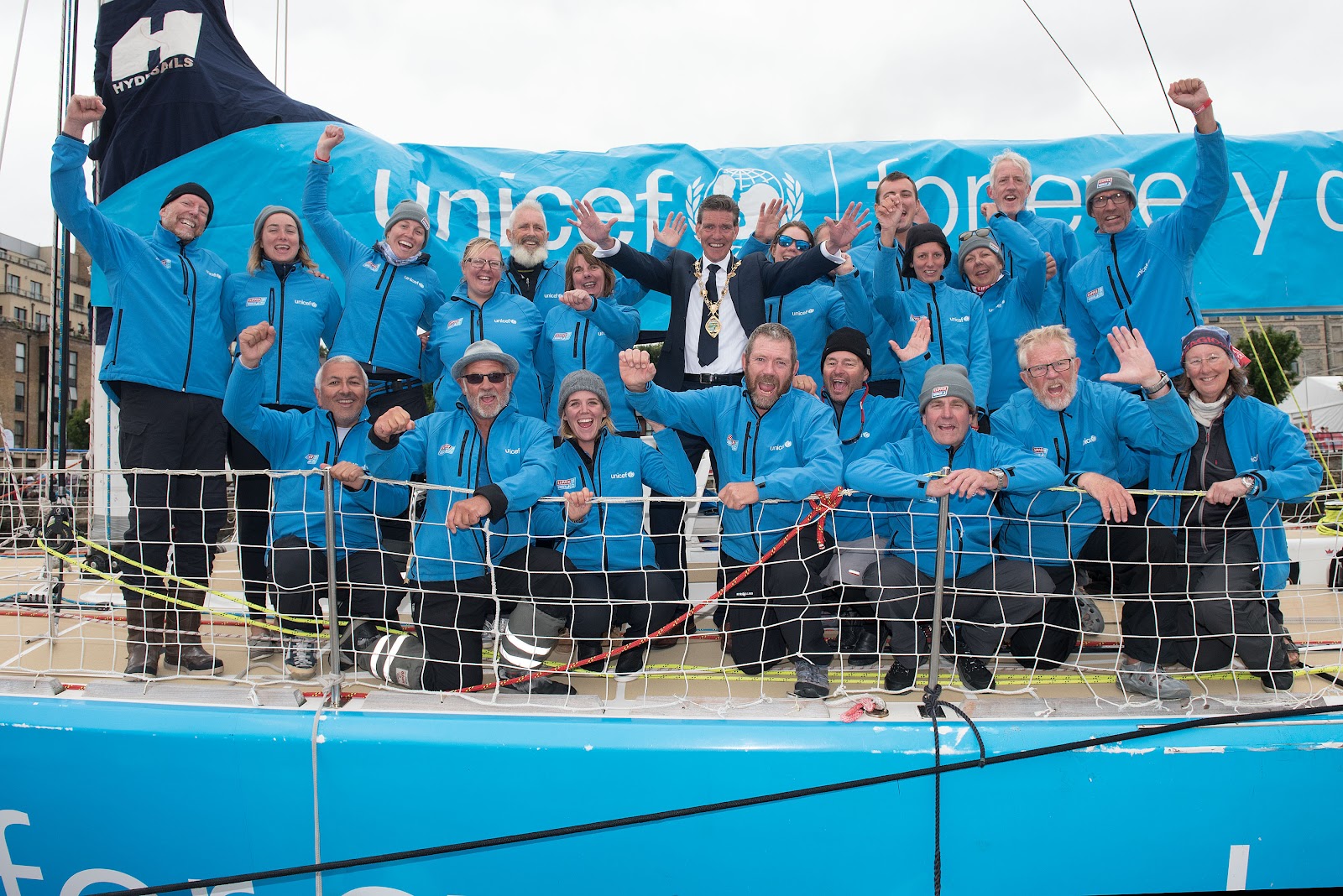 Alison Purseglove, a participant in the Clipper 2017-18 Race reflects: “Unicef was second on the North Atlantic crossing, which was very fast, and along with two other boats we arrived two days too early for the Derry~Londonderry stopover. We thought we would have to wait at sea. Not so! The city changed all its arrangements so we could land, including greeting us with the Mayor and a piper. We had the city to ourselves until the rest of the fleet arrived over three days after.

“We received fantastic hospitality. Most of the taxis wouldn't take fares. The only downside was one visitor to a Public Yacht tour wouldn't believe I actually sailed in it (a bit much after 28,000nm!).”

Live music is a huge part of the Foyle Maritime Festival. Peter Smith, who was a crew member on the Clipper 2011-12 Race says that one of his fondest memories of the stopover was: “A surprise welcome from my daughter.” This magical reunion was captured on camera, with Peter realling when the photo (featured below) “was shown on the big screen while the Undertones were playing their concert.” 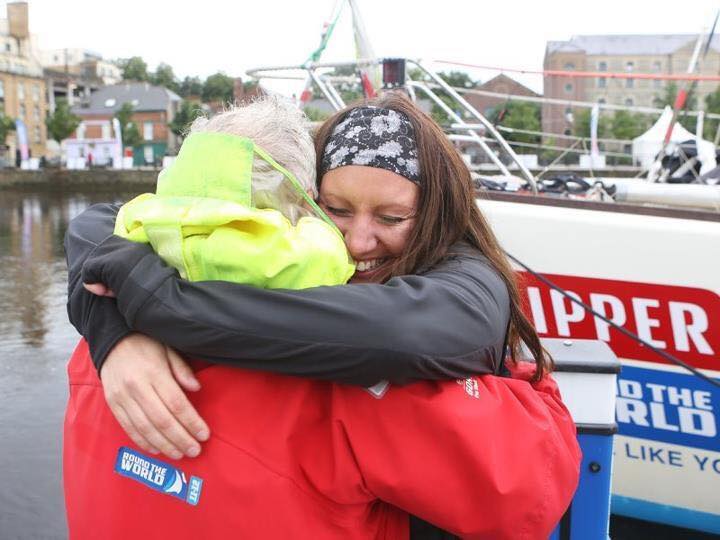 All Race Crew are treated like celebrities by the warm and friendly Derry~Londonderry residents but one boat achieved A-List status on the Clipper 2017-18 Race. The Skipper of Hotelplanner.com was local boy Conall Morrison and his team was adopted as the ‘local boat’ with Conall and his crew’s progress eagerly followed as they raced around the globe. He says: “The buzz around us arriving in my home city really started to grow from the ‘100 days to go’ point. I did an interview with BBC Radio Foyle’s Mark Pattison when we were in the middle of the North Pacific Ocean which was a bit surreal. Then in New York, a little girl came to see our boat and asked if we’d take her teddy ‘Patsy’ on board as a crew member and sail it to Derry~Londonderry, where she’d pick Patsy up. So the teddy was fixed to the helm and stood there the whole way across the Atlantic.” But nothing could prepare the team for the welcome it received in July 2018 when Hotelplanner.com completed its North Atlantic race and made its way down the River Foyle. “There were boats with family and friends of mine and the crew on board, waiting for us at the mouth of the Foyle and then Greencastle. They followed us all down the Foyle, with people waving from the Foyle Bridge too.

“There was then a massive turn out on the quay, with radio stations down there and the Mayor right in the midst of things, shaking everyone’s hands and welcoming us to the city. It was great to see so many people, and we got to do an extra turn down the river so we could wave to everyone that had come out to support us. It was amazing to see so many people lining the Foyle, I even spotted my old driving instructor who’d come out to cheer us in. Conall continues: “For me, it’s always great to see so many people using the waterfront during the Foyle Maritime Festival, all the local boats mixing with the vessels who’ve travelled from much further afield to be there. It was cool to see all of the quay space being filled up by boats as it’s such a lovely resource for the city. The Voyages Showcase Event which we led was great craic. Every apartment along the riverfront was having a party and we did Mexican waves with our mobile phones, back and forth to each other. I’ll never forget it.”

It’s the locals that make the city so vibrant and welcoming. In the past, local businesses, from bars, restaurants to hairdressers and beauty salons, have adopted a Clipper Race Crew team, giving them a home from home experience and hosting a party or three in their honour. Everyone seems to get caught up in the Clipper Race bubble, which makes the city feel electric to crew and locals alike.

Says Jacqualine Patton, crew from the 2015-16 edition: “We so loved our time in Derry~Londonderry. Coming into port was very emotional as I was the only Northern Irish crew on board my boat, GREAT Britain. Friends had sailed up and were waving enthusiastically as we came in. Also I hadn't seen my husband since we waved goodbye in Seattle. The crowds were more than expected. The Mayor came to the pontoon to welcome us, before the crew parade and family welcome party.

“We had crew hubs in local venues around the city, which was a fantastic idea. We were treated exceptionally well by the owner of ours, the Blackbird. The venue was decorated in team colours, staff dressed as matelots, even the menu was personalised. Everywhere we went with our crew jackets on, the public treated us as "celebrities". I cannot say enough good things about my experience. The Parade of Sail was very special. People followed us until they couldn't. Our Skipper shared a naval acknowledgement protocol with the RN vessel. Memories which will last forever.”

The Clipper 2019-20 Race is set to resume in February 2021 and, as previously planned, intends to stop in Derry~Londonderry arriving into the city in Summer 2021. Clipper Race organisers are hopeful that the planned visit will also see the Foyle Maritime Festival take place once again. For more partying and all the great craic that this vibrant city has to offer.