Reflections on the final ocean crossing

The final leg of the Clipper Race comes with tremendous highs but also lows as it means the global journey is coming to an end. At a time when the Clipper 2019-20 Race crew should have been completing their penultimate race of the series, crew members from previous editions look back on their own experiences of the North Atlantic crossing.

One of the most popular stages of the circumnavigation, Leg 8 sees the final ocean crossing - the North Atlantic Ocean. The route sees the fleet taking a popular passage across the North Atlantic, following the Great Circle on its way back over towards Europe.

Video: Footage from the final ocean crossing in the Clipper 2015-16 Race

For crew doing only Leg 8 they watched the race unfold with anticipation, waiting to step on board. For the multi-leggers and circumnavigators it marks the final stage of an epic journey which for the round the worlders will have spanned over 11 months.

Colin Hammond, who raced from Qingdao back to London, in the 2015-16 edition, said: “ I had been flying back and forth across the Atlantic for nearly 50 years and looked down from the windows of the plane at the sea wondering what it was like down there. And now I would know.” 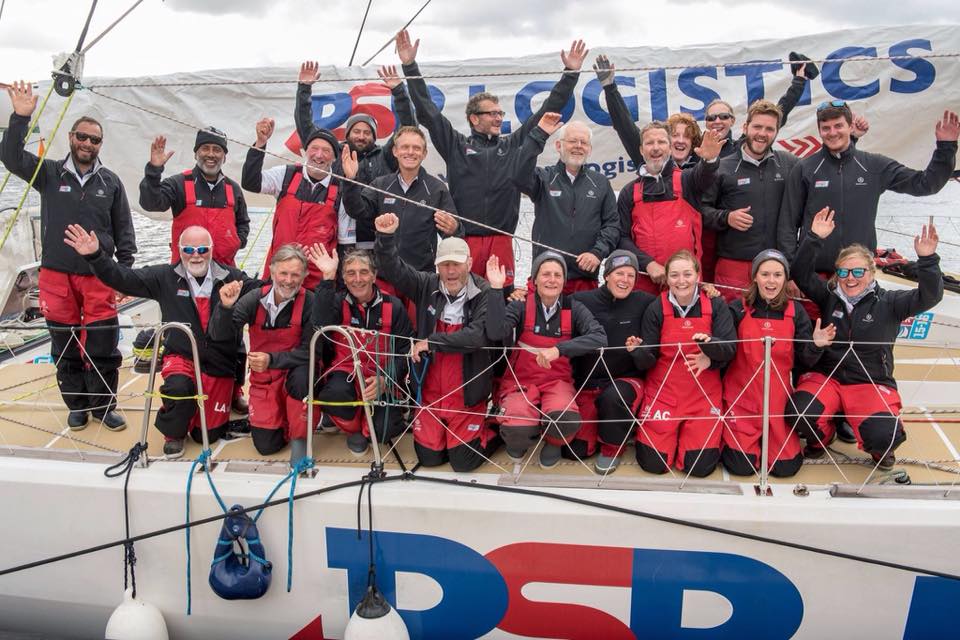 Weather in the North Atlantic can be as heavy as the Pacific with swirling depressions causing high winds and big swells. Continuing east back towards Europe, some fun and fast downwind sailing is often on offer in prevailing westerlies.

“We had a fantastic experience crossing the Atlantic on Jamaica but had some hard periods with frequent sail changes in rough seas.” Reported Duncan Bagshaw, who competed in the Clipper 2007-08 Race.

He went on to say: “The finish line was within Cork harbour and the wind was favourable so we were able to keep the Spinnaker up right across the finish line. Our Skipper, Simon Bradley, suggested I go and sit up on the pole to spike the Spinnaker after we had crossed. The press boat was buzzing around taking pictures. And the rest of the crew were giving me some grief from the back of the boat for "posing"! In the photo I am looking back and smiling at them. We were all looking forward to a great stop in County Cork, and it didn't disappoint.” 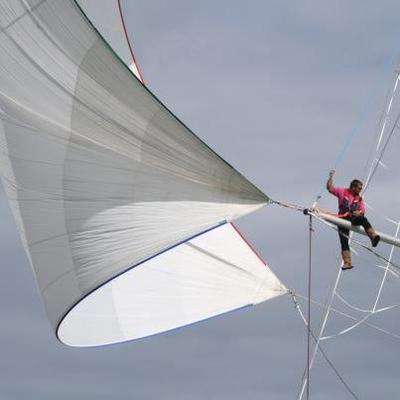 Image: Duncan preparing to spike the spinnaker on crossing the line into Cork

Once back on UK soil, the adventure’s conclusion becomes an ever-impending reality but the penultimate stopover offers the perfect atmosphere for crew and their supporters to start the celebration early.

In the most recent editions, this penultimate North European stopover has been in Derry-Londonderry with the stopover being the focal point of the Foyle Maritime Festival. With many crew from earlier legs flying out for the stopover, it is often seen as the final fling before the finish. For Roseann McGlinchey, a Donegal local, this was an extra special part of Leg 8 during the 2017-18 edition. She enthused: “The stopover was incredible. To sail into my home city and see my family for the first time in a year is something I will always remember. We almost felt like celebrities during our time in Derry¬Londonderry everyone made us feel so special and welcome.” 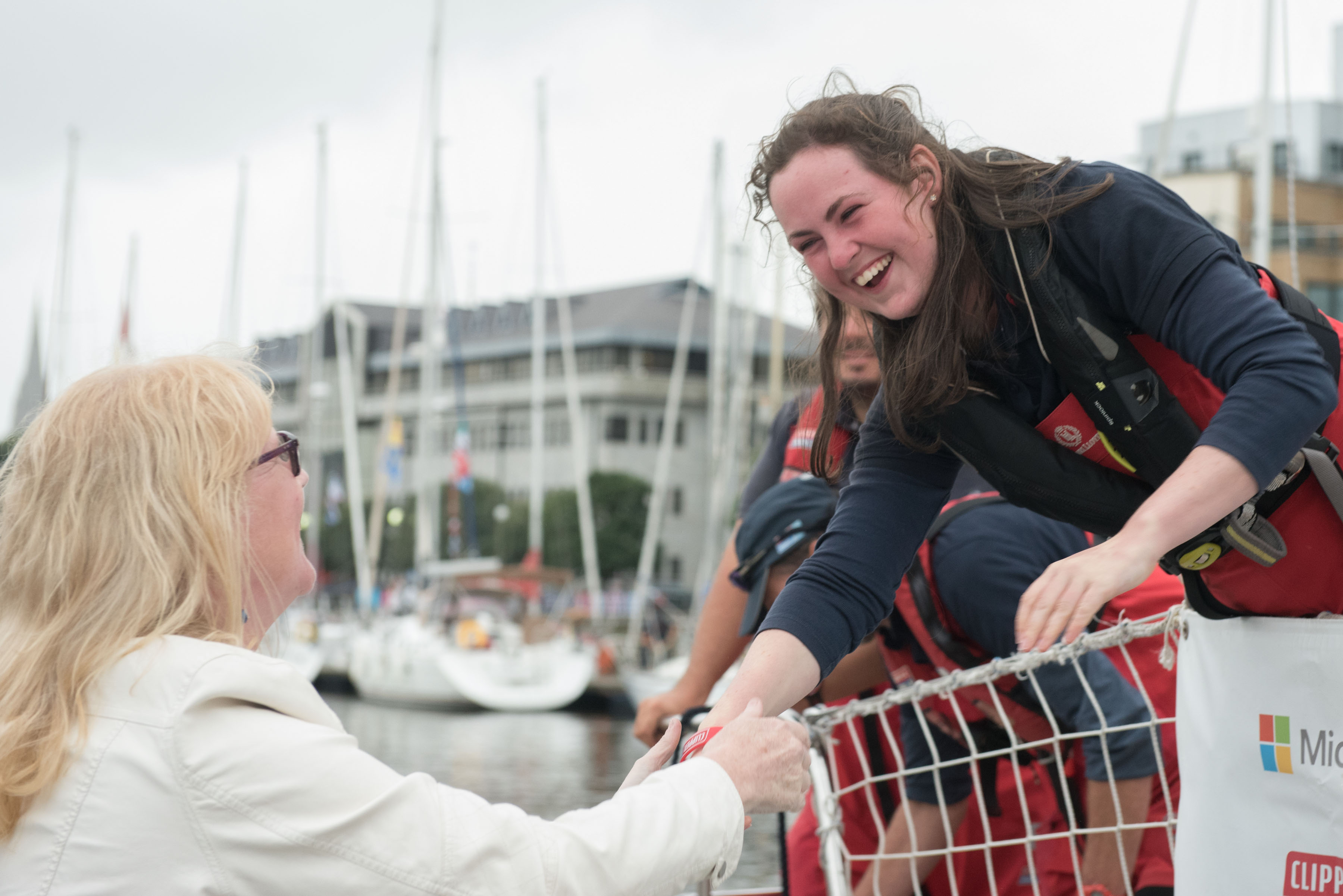 Image: Roseann on arrival into Derry-Londonderry

For some past circumnavigators, the differences between the first Atlantic crossing and the last were like chalk and cheese. With the experience levels and confidence so much higher after 40,000 nautical miles of sailing. Alumni Lisa Pover explained that by Leg 8 the crew were: “So much more experienced, fitter, and you knew exactly what your crew mates would do before it happened. Evolutions went like clockwork.”

“The last crossing to first was as different as black is to white.” Said Simon Rosbottom, who after ten challenging months circumnavigating, felt ready for the race to reach its conclusion by the final ocean crossing and his final achievement would be to finish this endurance challenge. He added: “A memorable moment was turning over the chart mid-Atlantic to see the UK for the first time in almost a year.” 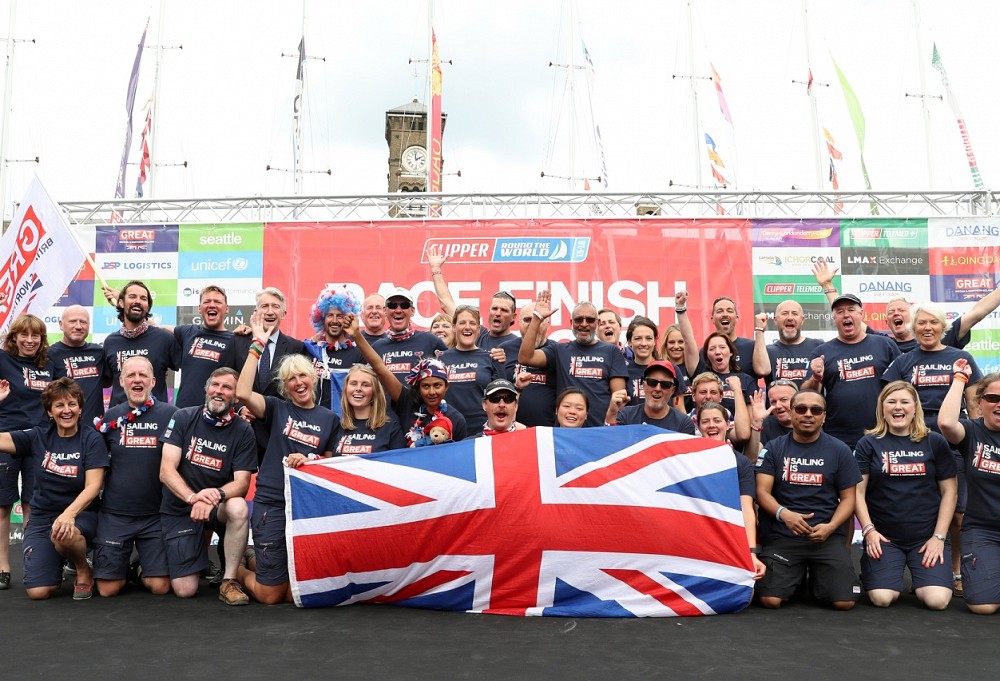 Whilst spending 11 months racing around the world crew experience and celebrate many personal moments on board. But life outside of the Clipper Race bubble continues and historical and international events have also meant there have been many ‘Where were you when…’ moments whilst racing on board.

For those competing in Leg 8 of the 2015-16 edition it was Brexit, with British crew voting on the referendum earlier in the race and finding out the results mid-Atlantic. Sadly for the crew competing in the Clipper 2000 Race their final crossing was marked by the tragic 9/11 attack on the World Trade Centre. Harry Cooksley reflected: “In the 2000 race, our final crossing of the Atlantic was memorable in many ways. We left New York just a few days before 9/11. Most of us had been up the Twin Towers, one had a stag party there and we had recorded a short video message from the top. When the news reached the fleet, there was disbelief and horror about what had happened. We had met and spoken to people who worked there. Every boat was very quiet for days.” 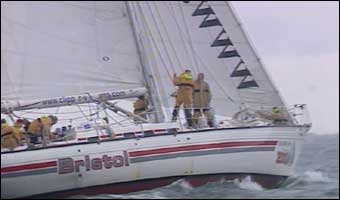 Image: Harry Cooksley and Bristol from the Clipper 2000 Race

As often with ocean racing, despite the best laid plans you never know what conditions you will face. Unfortunately for Harry and his team, they experienced a slow crossing. “We had no wind. Our destination was Jersey, Channel Islands with a short stay then a final short sprint to Portsmouth. The plan was to have a big end of race party in Jersey with many family and friends booking hotels to come and join the fun. The only people that weren’t there were us! It took us seven days longer than planned, so we missed the party.”

The final ocean crossing can deliver a complete variation of feelings. With everything from elation after completing the challenge, nervousness about getting back to reality after the race, excitement about seeing friends and family and even sometimes frustrations such as narrowly missing out on a podium. As was the case for Fiona Armer, a circumnavigator on board Hull & Humber during 07-08 edition: “(I felt) sadness that it would all be over soon. Huge relief that it would all be over soon and that I had not only survived but enjoyed lots, grown as a person, built friendships for life and achieved a lifetime ambition to circumnavigate the planet in a yacht race.”

Whilst homeward bound, there is still plenty of racing to be enjoyed during the final crossing. With the overall leaderboard placings being decided on the points from these final races on more than one occasion. Ahead of the final sprint home, the last ocean crossing always has the potential for some very fast sailing and variable conditions but the memories will last far longer then biting cold.

If you can see yourself at the finish line after achieving something remarkable, applications are open for the Clipper 2022-23 Race. You could be preparing for the race of your life.

Following the outbreak of Covid-19 and postponement of the current edition the Clipper 2019-20 Race is set to resume in February 2021.