It’s hard to put into words the incredible moments that intrepid Clipper Race Crew experience when at sea. Skies painted with brightly lit stars, the sheer power of towering waves, drifting alongside dolphins in Doldrums. Ocean racing enables people to encounter true wilderness, and all of the wonders that come with it.

Hear from Clipper 2019-20 Race Crew as they reflect on the seven wonders of the ocean racing world, having spent months living at sea as they raced around the globe.

“When we sail across the oceans, we go into places that are so remote. One of the things that I remember was sailing across the North Pacific Ocean. We were in one of the most isolated places on the planet. There was talk that the International Space Station was closer to us than any other land. We didn't see another ship, or another boat, and hardly saw any planes. There was nothing out there that was for mankind, and it felt quite special. It didn't feel lonely at all, actually, because I had my team. But it did feel very isolated, it really did.

“It's very special because it's back to basics, back to the planet. The forces of nature and us. We're a small dot in the middle of an ocean. We're out crossing one of the oceans and just us harnessing that power. So sailing a yacht is the epitome of that, isn't it, using the wind and the waves, protecting ourselves from the weather. Using the weather, for me, it's very special.”

Heather Broadbent, Circumnavigator from the UK on GoToBermuda. 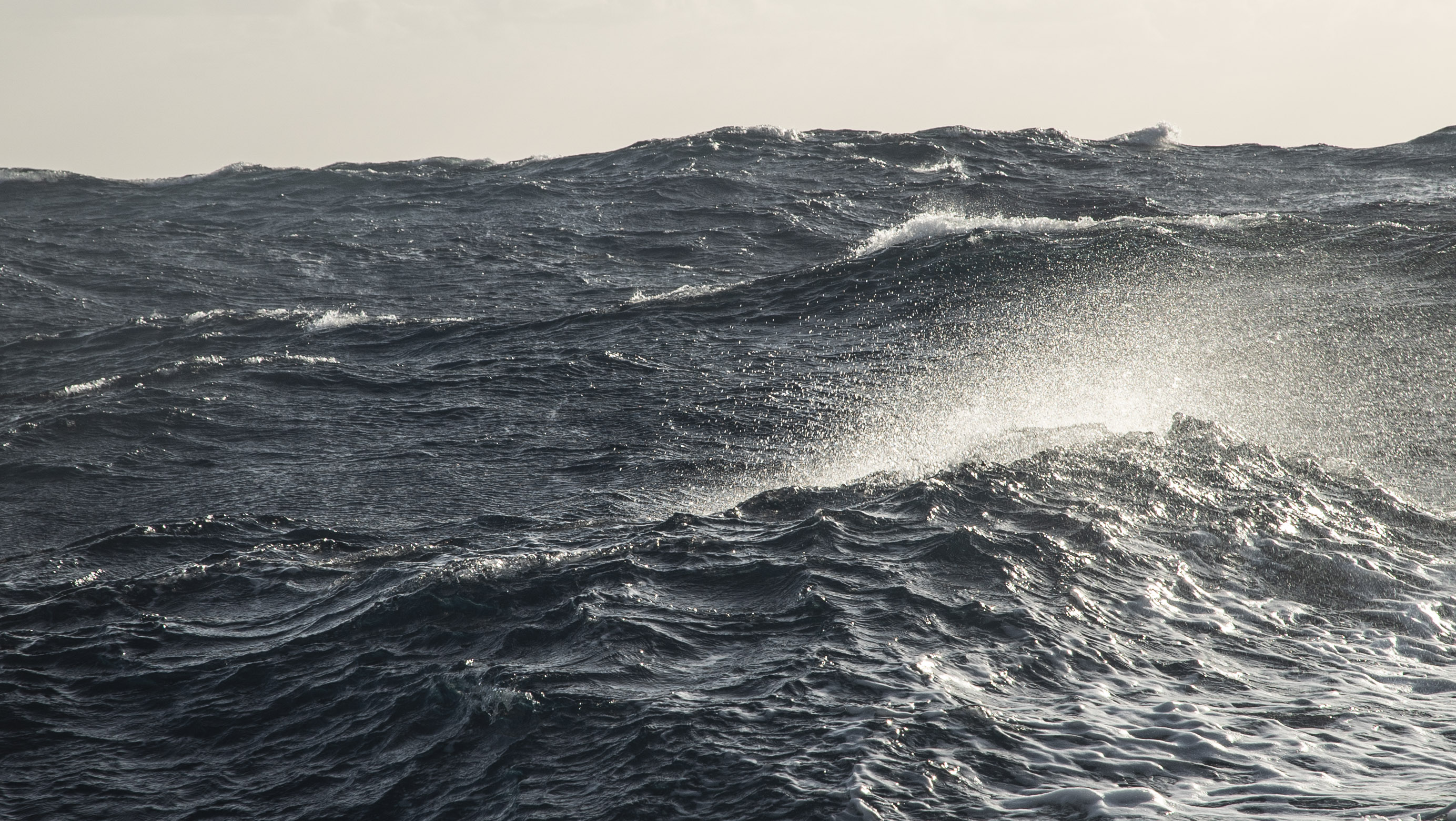 Image: Race Crew sail to the most remote parts of the planet

“I wanted to see the Roaring Forties in the Southern Hemisphere where the ocean is unimpeded. The waves build and build and build because they're all built over the continents down there, and the winds circle around Antarctica. We ran into 60 foot waves, which was just incredible to me.

“The waves were steep. And so you wonder, okay, here comes this huge wave. How do we get from the bottom of it all the way up there? Then the next thing you know, it's up against you. You're standing on top of the wave. You're looking all around the ocean. And then like five seconds later, you're down in the valley surrounded by waves, and the winds gotten quieter because you're down among these giant waves and you're hiding in between them.”- 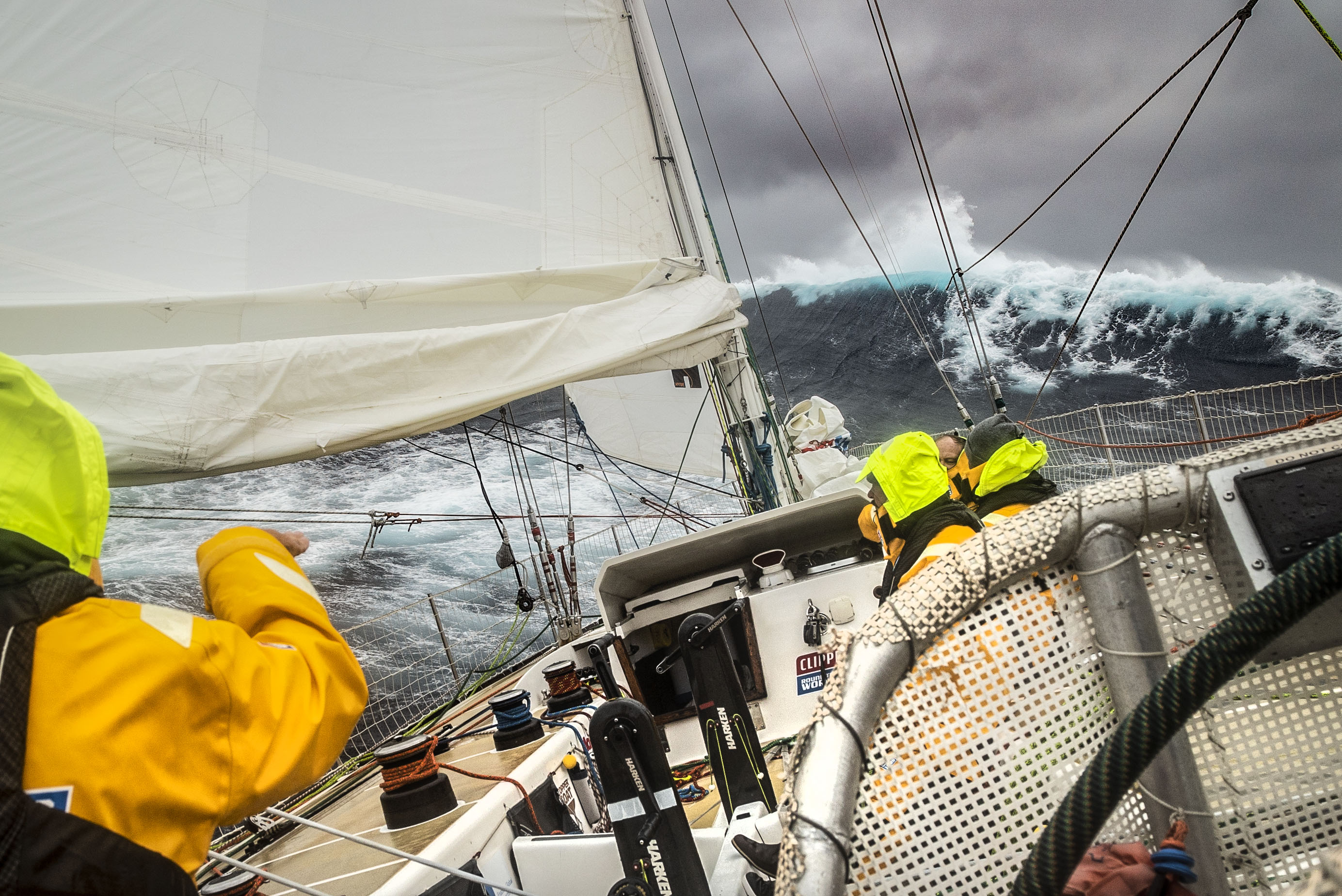 Stars and the sky

“You look up and there are stars everywhere- it nearly gets light because it's so starry. It's like a carpet of stars that you have above. It’s just stars everywhere- not talking about the shooting stars, you’d run out of wishes very soon!” 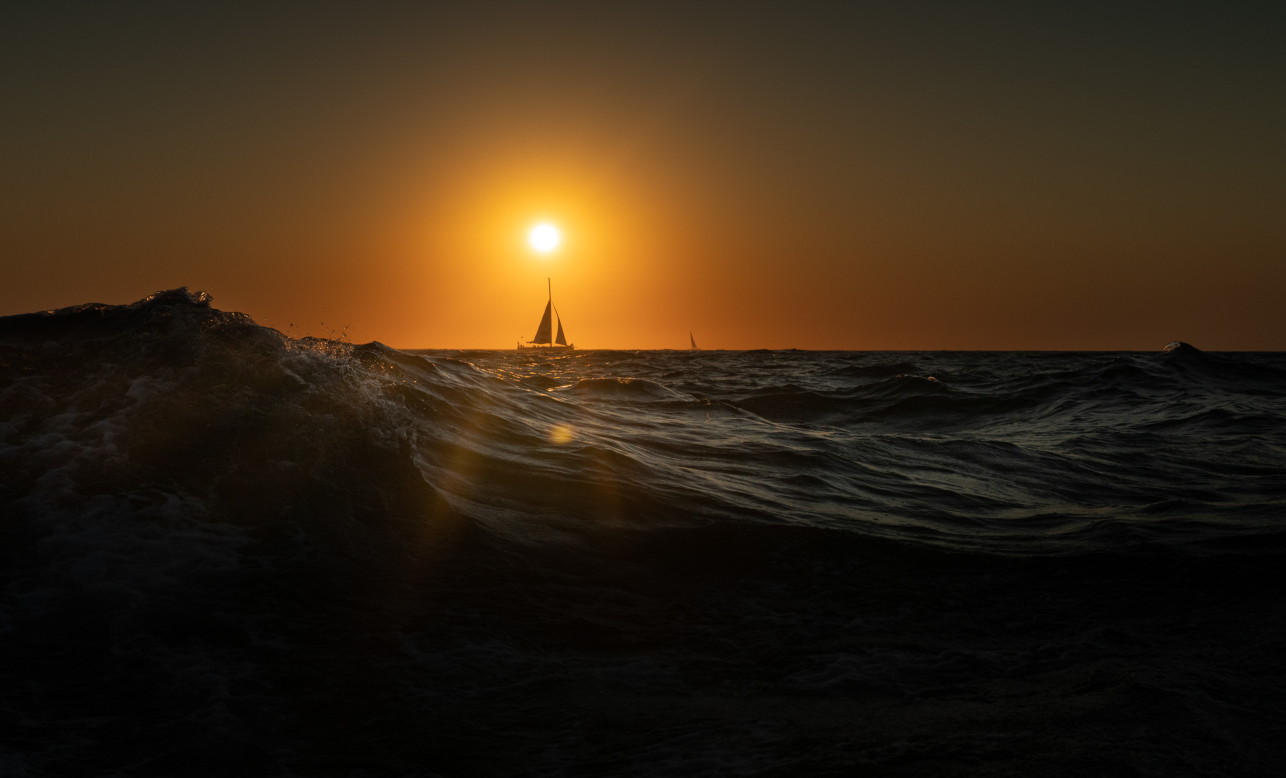 “The things that really stick out for me have to be the waves and the wind and just the raw power of nature out there. Now, it's kind of one of the last untamed wildernesses that you can visit, and it is just absolutely spectacular. I'm never, never going to see things like that again.”

Rachel Burgess, Circumnavigator from the UK on board WTC Logistics

“For me I was impressed by the weather. I think back to running down with a spinnaker sheet in my hand with strong winds and lightning all around you. It's just magic. And you realise that you're really, really, really small.”

Karolina Jonason Isberg from Germany, Legs 7 and 8 on Qingdao.

“An albatross does it for me really. It touches my heart. It's one of the reasons why I love to be in the Southern Ocean or in the North Pacific, although it's really tough out there. But watching those graceful birds, when they are gliding along big waves, it's just beautiful and so graceful. It seems like they don't use any effort at all, they’re just gliding along. You barely see them flapping their wings and I will never, ever forget what it looks like, because it's only something you see there. It's something you don't get to see anywhere else in the world.

“And when you're on the boat and you're sitting there and you can watch them, I can sit on the boat on deck for hours. And it doesn’t get boring for me because it's just so, so beautiful. You just take in the picture and take it with you in your heart. And I know it's something I will never, ever get to see again.”

Bettina Neid, Circumnavigator from Austria on Dare To Lead 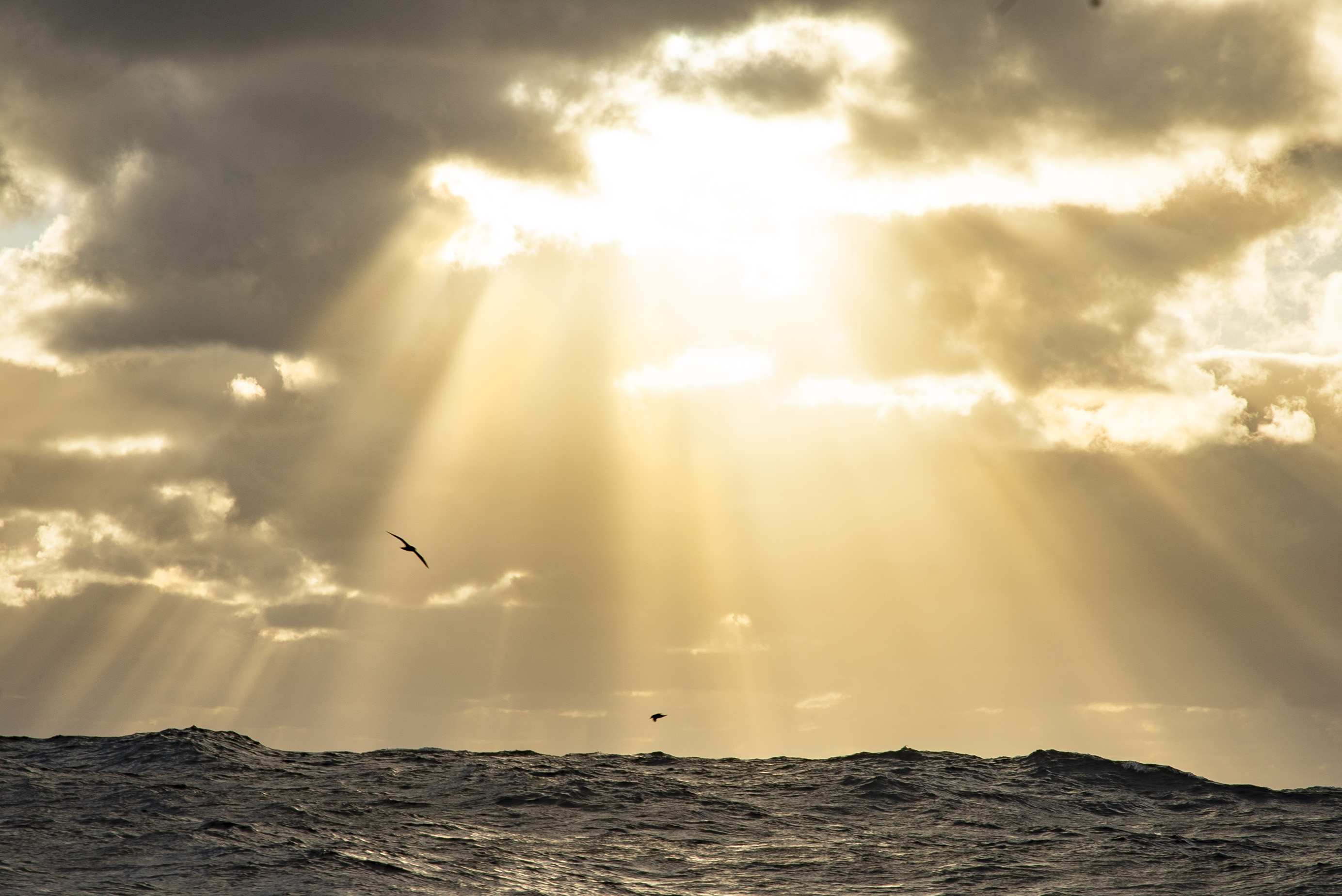 “We saw lots of albatross out in the North Pacific Ocean. They were amazing- watching them glide through the waves dipping down below the tops of the waves and then reappearing. I was quite mesmerised watching the birds.

We saw a lot of boobies and gannets as well. We had quite a few visits from birds on deck. One made his home, so he stayed with us for two or three days. We knew it was the same bird because he had a little bit of feather in his claw. So each time he went away, presumably fishing, he’d then come back a couple of hours later and sit back on the push pit with us.”

Steve Westwood, Legs 6,7 and 8 from the UK, on board Dare To Lead

“We’d left Fremantle and were heading down towards the Southern Ocean. On Christmas Day we were joined by a pod of dolphins - there must have been 5000 dolphins - all chasing the boat. And they were like keen dogs, you know, Labradors- I've never seen anything like it. And they just looked like they were trying to get to us, to join us and say Happy Christmas. They stayed with us for about 15 or 20 minutes. And then as fast as they came, they were gone. It was absolutely mind-blowing.”

Heather Broadbent, Circumnavigator from the UK on GoToBermuda

Land approaching - ”When we're coming closer to land, I smell it first before I see it. Also the birds increase and you see different types.. Now you get the smells, the smell of green. I don't know what that's about, but it's definitely a thing, you know?” 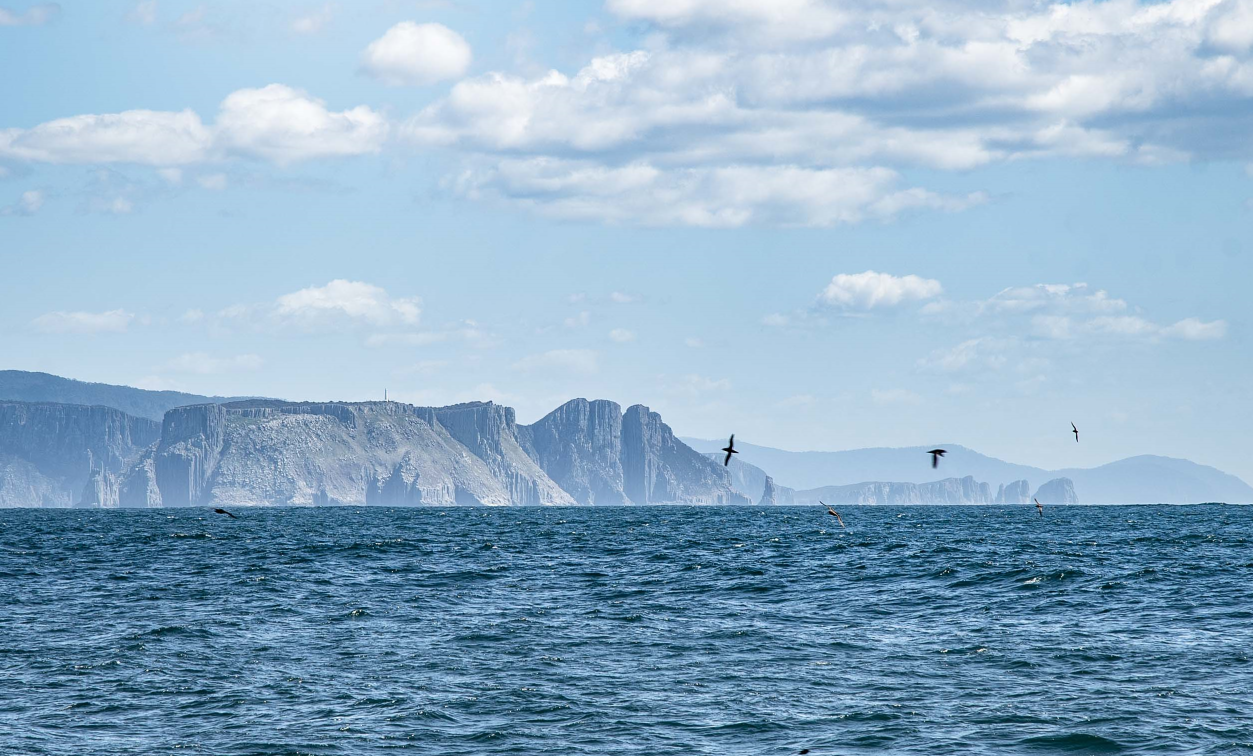 Image: Sight (and smell) of land on Leg 4 as the fleet rounds Tasmania

Moon-bows - also known as a moon rainbow or lunar rainbow - are rainbows produced by moonlight rather than direct sunlight and occur less than ten percent as often as rainbows. “If I could live another day again, it would be the night I sailed a Clipper Race yacht on the Southern Ocean in 18 knots of wind and witnessed a moon-bow.”

Phosphorescence- this incredible phenomenon is the luminous, sparkling glow caused by millions of tiny ocean organisms. Witnessing this whilst sailing across an ocean is a true privilege. “And the only way to experience this is to go to sea, and see the nighttime phosphorescence and dolphins. When it's dark, there's stars in the sky and all of a sudden there's these jets of lightning through the water where the kind of bio phosphorescence has been disturbed by the dolphins and you get these kinds of streaks of phosphorescence and glowing dolphins. It makes me feel so lucky to be able to go and see those.”

Rachel Burgess, Circumnavigator from the UK on board WTC Logistics

Inspired to take on the world’s greatest ocean adventure? Places are still available on selected legs of the Clipper 2023-24 Race, and applications are open for the 2025-26 edition. Apply now.

Meet the Clipper 2023-24 Race CrewNames: Anton Baturin and Pavel NesvedovAges: 43 Occupations: Lawyer and AuditorHometown: LuxembourgLeg: 8Two Luxembourgers who have sailed together for years are preparing to take on a sailing challenge like nothing they have experienced before: crossing the North Atlantic…