GREAT Britain has crossed the Seattle Pacific Challenge finish line in fourth place. Skipper Peter Thornton sent notification to the Race Office to say they had finished Race 9 at 1127 UTC on Thursday 14 April.

After 25 days of racing, in which the team also picked up two bonus points at the Scoring Gate, Skipper Peter says: It's seemed like a long one this for many reasons, but a sense of achievement is shining through from everyone. We're all still rather damp especially after yesterday's vicious storm and VERY much looking forward to arriving into Seattle in about 20 hours time. The position of fourth is not as I'd intended for this race but the points with the gate mean that it's okay.

"However, right now I am actually very much enjoying the sunrise motoring through the amazing waterways of Juan De Fuca with a flask of tea in my hand. The crew are all healthy (other than a few knocks and bruises just to show that they've actually been sailing) and the boat is in one piece with minor maintenance needed. Acceptable," he added as the team continue under motor to Bell Harbour Marina where it is expected to arrive at 2100-2200 local time tonight (0400-0500 UTC on Friday 15 April).

Asked to sum up their Might Pacific expereince, GREAT Britain crew members say:

"It's been emotionally and physically tough. The Pacific one whole lot of adventure!" Mel Thompson (Legs 5 and 6).

"We had a genuine ground hog day with two April 5ths. The second was thankfully much better than the first!" Phil Orford (circumnavigator).

"Life's a breeze, except in a strong wind gusting 60 knots in the middle of the Pacific! Tough race!" Andrew Hendley (circumnavigator).

"When you can watch someone be washed down the deck by a rogue wave and come up sputtering on his hands and knees, to then struggle back to his feet and back to the bow without so much as a backwards glance as if it were the most normal thing in the world... You know you're in a good place!" Rowan Fernando (Legs 3-6).

*******
Unicef has crossed the Seattle Pacific Challenge finish line, beating LMAX Exchange after a duel between the two teams for the podium during the race from Qingdao, China.

The team managed to hold off LMAX Exchange after just a few nautical miles separated the two yachts in the final stages of the race.

Skipper Martin Clough said: "The team has been nothing short of amazing and I am full of admiration for their spirit and resolve. I salute them all.

"While our thoughts are with skipper Darren and his team on IchorCoal, we have found space to celebrate a well-deserved and hard-earned result."

“Our first thought goes to Sarah Young, her family, friends and crew mates. Her loss on this ocean was a tragedy that hit us hard but her approach to life also inspires us to continue living and appreciating this adventure. On LMAX Exchange, we are a very close crew who work hard to succeed and look after one another as our priority is always to make sure we race safely.

“On the sailing side, we have continued to be competitive. To complete the crossing, we have come through great adversity and we are proud of our achievement. We have reacted, acted and stood up to every challenge that the seas and weather have thrown at us. Despite the tricky conditions, we managed to pass Japan first and score three points at the Scoring Gate.

“In the second part of the race we had to deal with freezing weather, heavy winds, significant boat damage, fatigue and we managed that quite well as we finished third. We fought a great close fight with Unicef who, along with Derry~Londonderry~Doire, we wish to congratulate on their impressive racing. With the success of the Scoring Gate and third position, we have hopefully increased our lead in the overall Clipper Race competition (penalty points pending) and will continue to push for success in the upcoming races.

“Ultimately, we have safely crossed the mighty Pacific Ocean and for that we are delighted,” Olivier added. 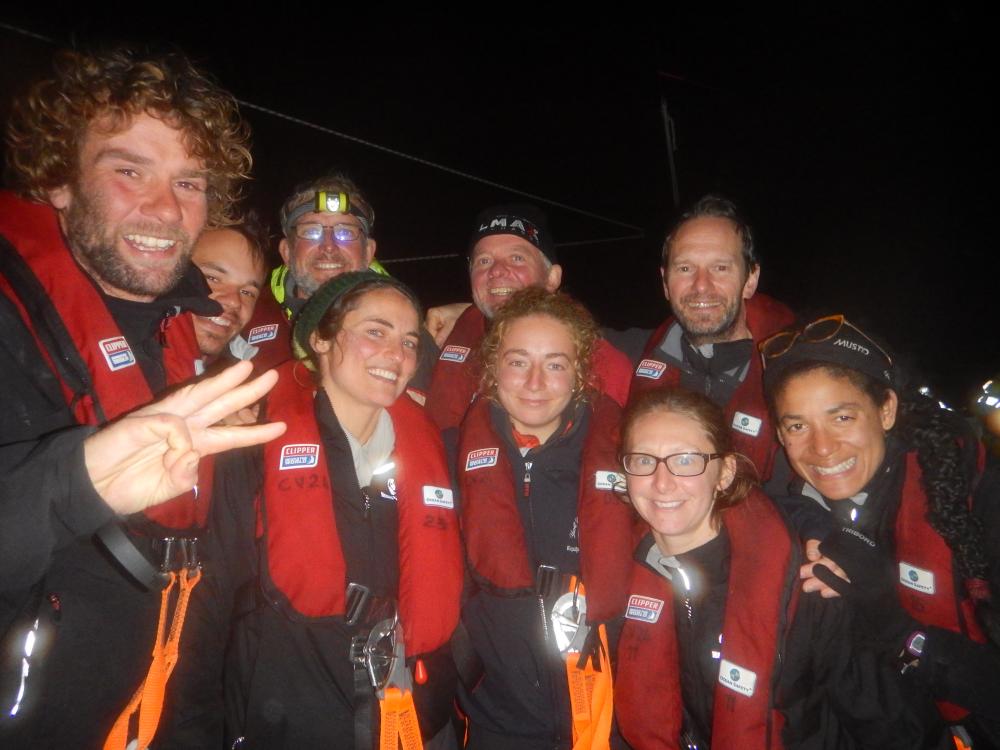 Round the world crew member Stephen O’Connor added: “Beleaguered, battered and bruised but not broken is how I'd describe my experience of crossing the Pacific Ocean. It's definitely the hardest thing I’ve ever done in my life and in a way I’d never have thought it possible.

“This crossing has challenged me emotionally, physically and mentally,” Stephen added.

Due to the busy shipping lanes in the final 120 nautical miles, the teams will now motorsail and make best speed for Bell Harbor, Pier 66, Port of Seattle, where they are expected to arrive at 1700 and 1800 local time Thursday, respectively. (0000 and 0100 UTC Friday)

The countdown has begun in Seattle which will make its debut as a Host Port to the Clipper Race for the first time in its 19 year history this week.While the crew contend with the final few miles to the finish line of the 5,400…

Derry~Londonderry~Doire has won its third consecutive race, finishing the Seattle Pacific Challenge at 0915 local time/1615 UTC today, 13 April.The Northern Irish entry finished the Mighty Pacific leg after 23 and a half days at sea in Race 9 from Qingdao, China, to…

With four teams having completed the Ocean Sprint, it is Unicef which has recorded the fastest time so…