The Unicef team has been fortunate enough to take some time out during the Whitsundays stopover to hear more about how fundraising for the Clipper Race Charity Partner helps to fund important global programmes including projects in Fiji, which is around 1,700 nautical miles away.

In the plush settings of Abell Point Marina, Skipper Bob Beggs and his Clipper Race crew were given a stark reminder of the realities facing some communities around the world as Cate Heinrich, Chief of Communication at Unicef Pacific, explained over a Skype call the significant impact that climate change is having on the Fijian Islands. 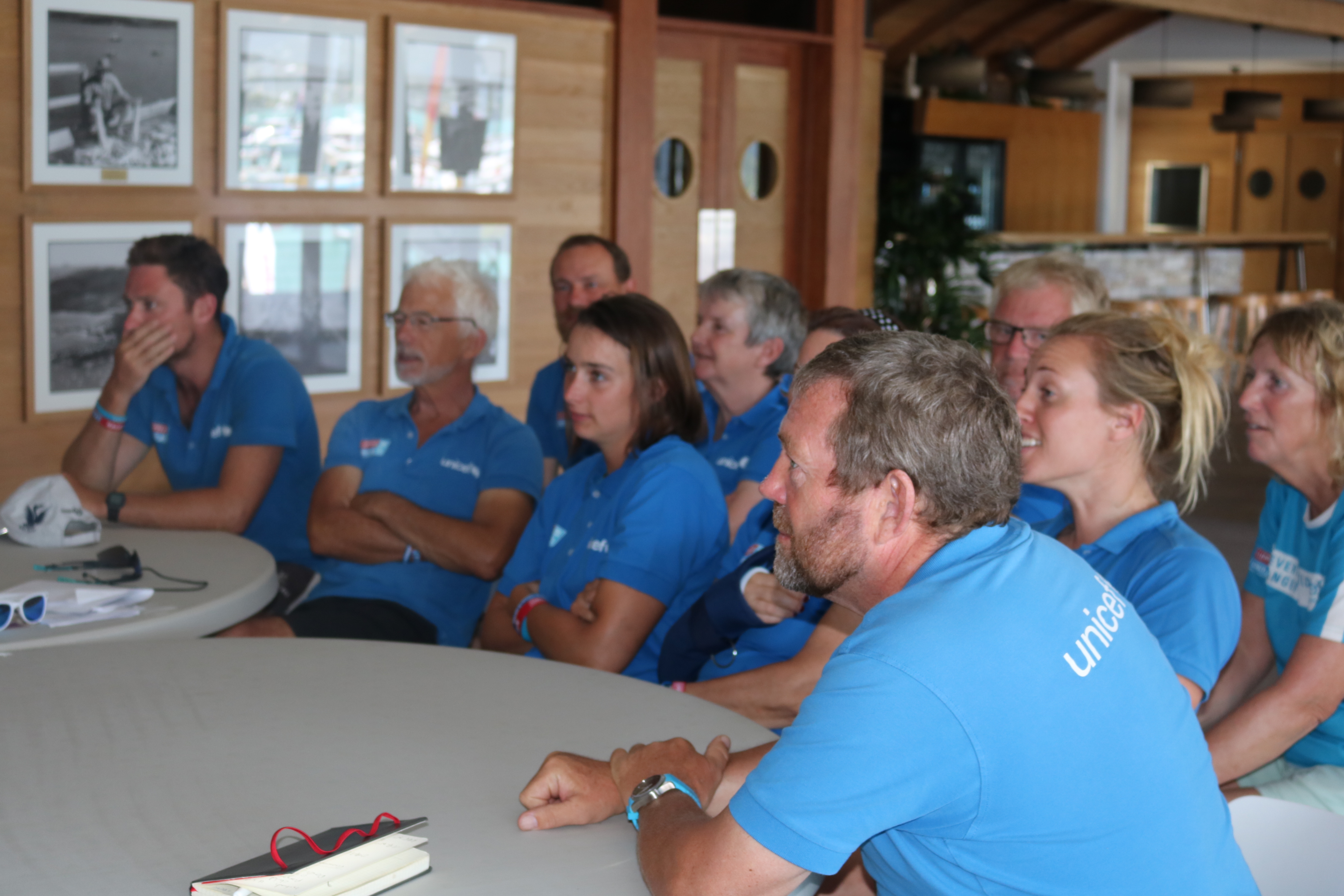 Cate introduced the Unicef team to several children from across the Fijian Islands who had travelled to Suva in Fiji and were able to speak on the Skype call about how climate change had affected their own communities and what their school had done in order to be better prepared.

Timoci Naulusala, from Naivicula Primary School in Tailevu and Shalvi Shakshi, from Nasarawaqa Primary School in Labasa, had both participated in a national final for a speech competition ahead of the UN Climate Change Conference (COP23) in November last year and spoke with passion about how action is needed to combat the effects of climate change.

Also in attendance were Jope Kingdom from Marist Brothers High School, Kevin Moceacagi, from Queen Victoria School in Tailevu and Shammah Prasad from SSKM College in Nadi and Shevik Shandil from Jai Narayan College in Suva, who were each able to provide detail on how they had been affected. 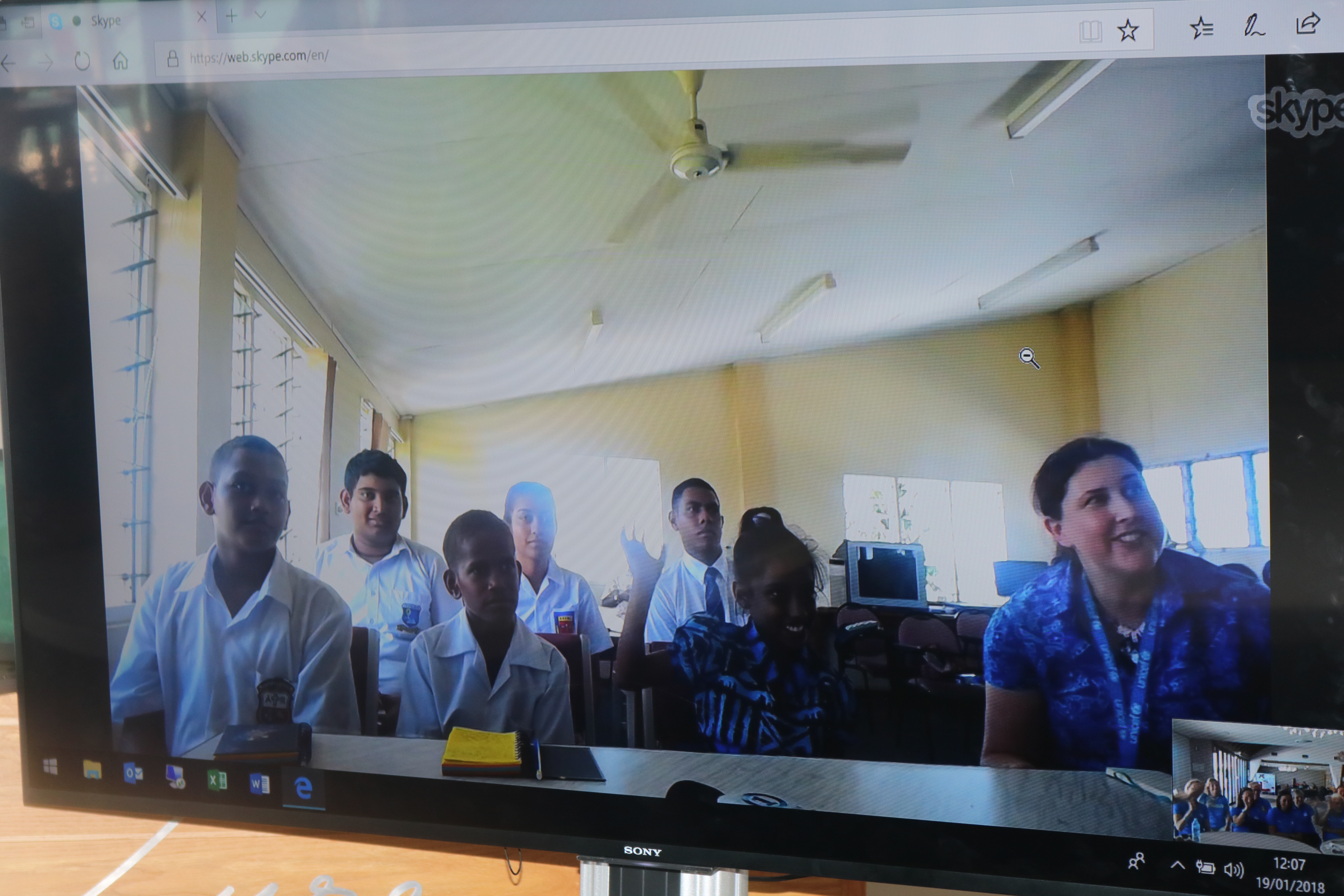 IMAGE: The Fijian children via Skype.

Upon hearing the plight of the children who represented various schools across Fiji, Skipper Bob Beggs said: “It was really good to speak to them, especially for myself and all of the crew to remind us of the very valuable job that we are doing here, trying to raise the profile, trying to raise the funds and awareness for Unicef. It was talking to people here, at the other end: the recipients of the help that Unicef puts into effect.

“Seeing the aftermath and what happens after the relief in the long-term is a great, valuable job that Unicef does – not just projects that sustain affected people through the terrors of warfare and climate disasters but also the ongoing care to try and help them rebuild their lives.”

“I think for my crew, who might feel that they are an average bunch of people, it was an eye-opener to realise how privileged they are when they see how some children around the world have very poor starts in life and how they overcome it.

“Certainly, you could see that the children we spoke to today are very studious, they care about the world and they’ve been looking at the effects of climate change globally. They interacted very well and they were excellent spokespeople for children of their age. It was good to get some feedback from them on the problems that they face and how Unicef is helping.” 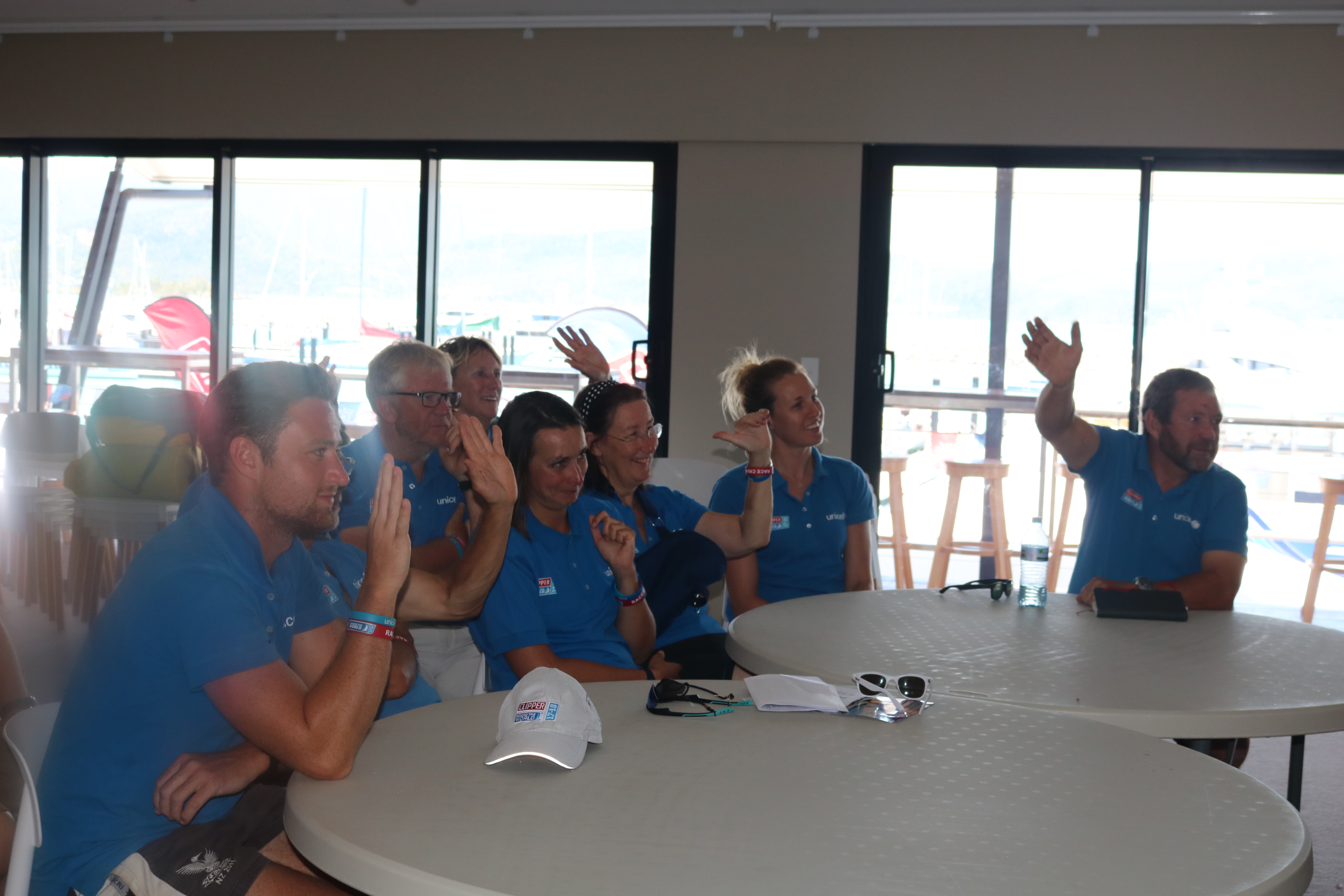 Unicef crew member Nicola Trinder (Legs 4 and 8) said: “The children said some really lovely things and had each prepared a short speech about how climate change is affecting them, and their family and their local community. The spoke about what they are doing to combat it and deal with the situation.”

After Bob provided an overview of the Clipper 2017-18 Race so far, the crew happily answered questions from the children, including about the backgrounds of the crew members and about what life was like on board while sailing around the world.

Bob and his team have been proud to represent Unicef and the valuable work that it does around the globe and having sailed almost 20,000 nautical miles from Liverpool (UK) to the Whitsundays (Australia), they are almost halfway through their circumnavigation where they have been helping to promote child rights and wellbeing.

Just one of the many fundraising initiatives that have been organised on the Clipper 2017-18 Race is the Unicef Spinnaker of Support, which has been flown, where conditions allow, since Race Start in Liverpool. It has been a popular way to spread positive, motivational messages, which anybody can sign. The children were shown virtually (via iPad) just some of the messages that had been shared so far and crew offered to add some messages from Fiji to it. 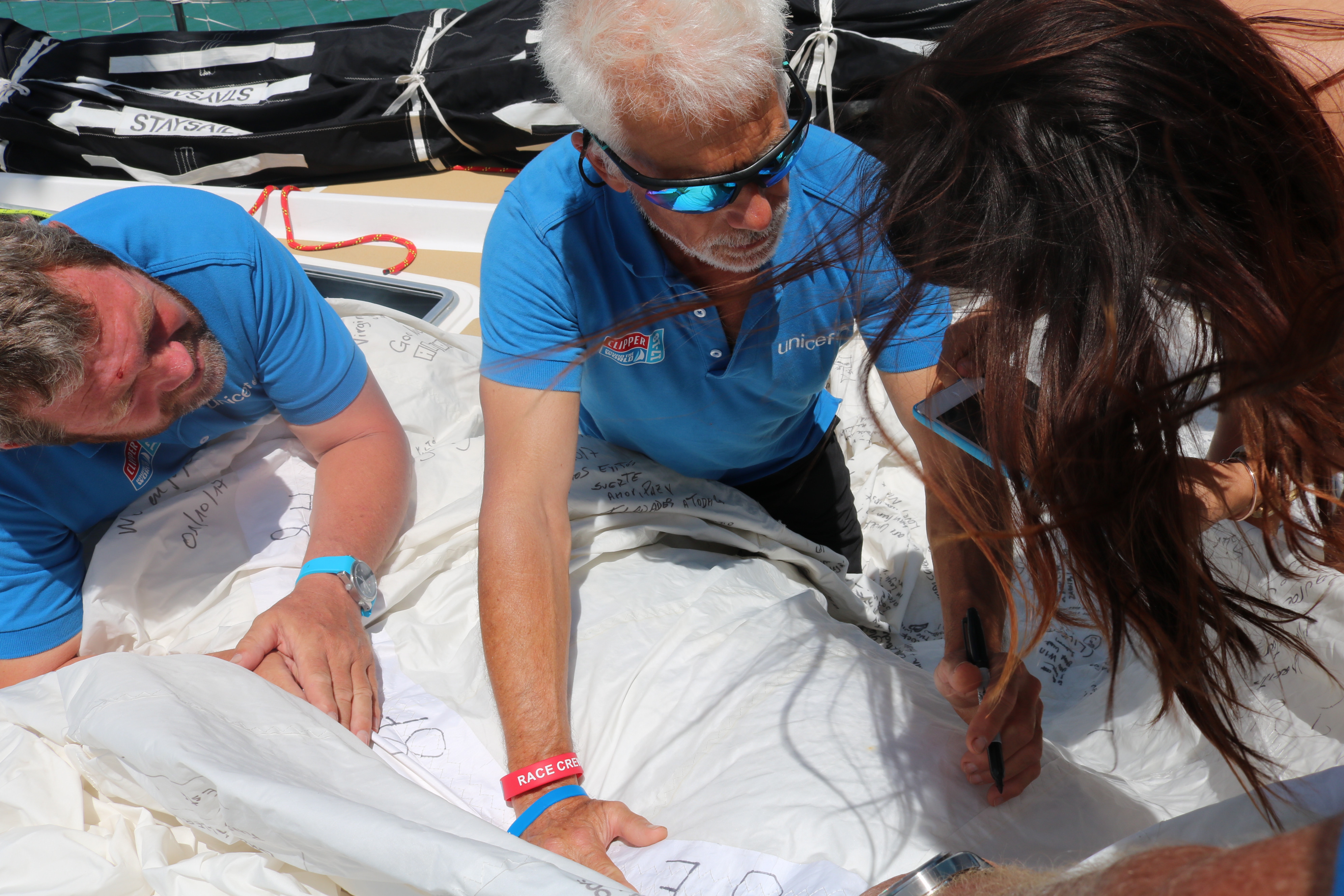 IMAGE: The Spinnaker of Support ready for another message...

After the crew wrote a message on behalf of the children, Skipper Bob said: “Every stopover, we lose more and more of the blank canvas as more and more signatures and drawings are added to it. I like to think that by the time we get back to Liverpool it will be completely filled. It is great to watch the signatures growing and growing from the corners of the sail.”

The Spinnaker of Support will be available to sign at various points during the Whitsundays stopover and anybody back home can also request a message to be added in return for a suggested minimum donation of £5 by visiting the dedicated JustGiving page. 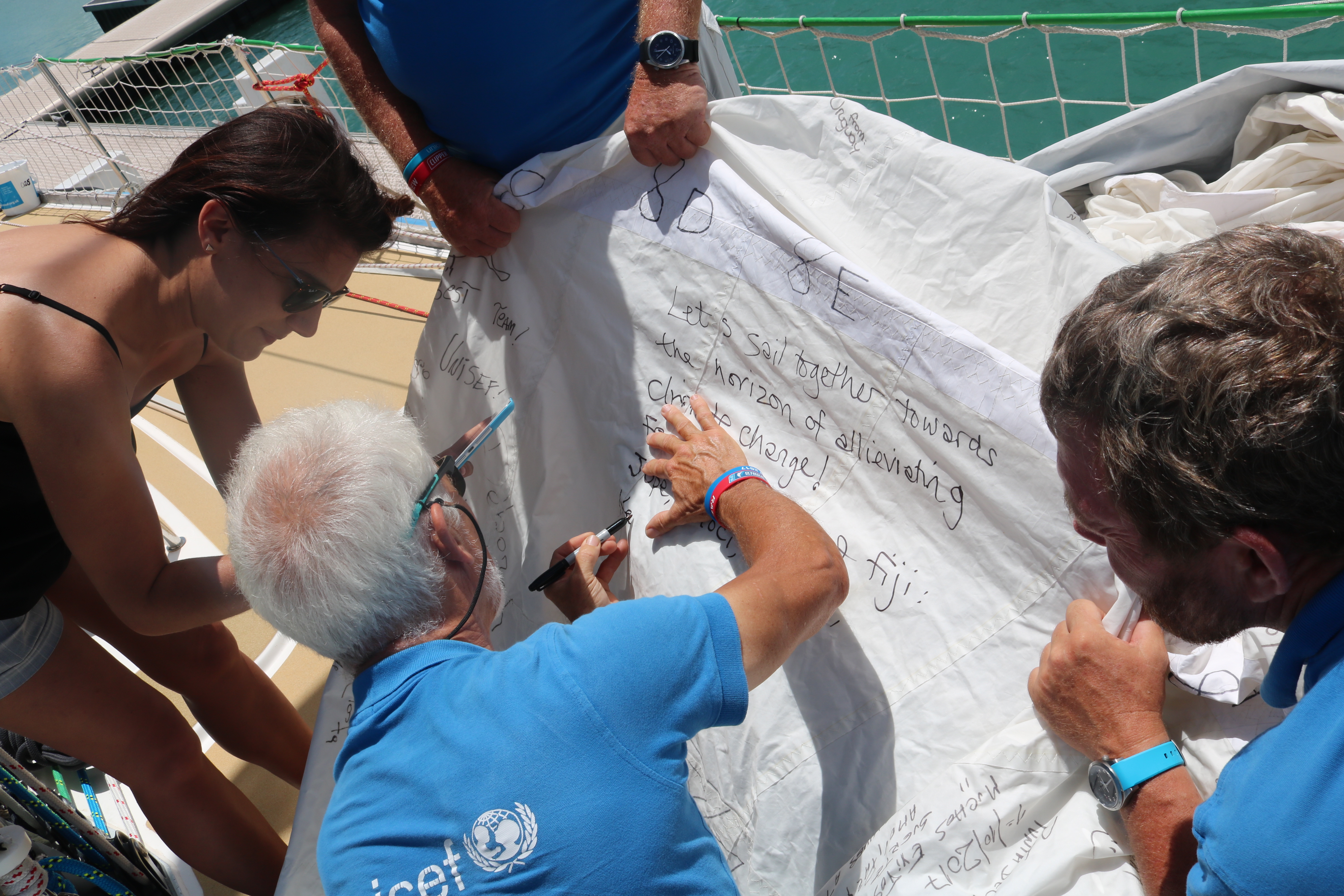 IMAGE: ...and a message from Fiji is added: "Let's sail together towards the horizon of alleviating climate change!"

After taking a detour past the Spinnaker of Support, Bob, Nicola and Ed Gildea (Legs 2, 3 and 4) took the children on a guided virtual tour of the Unicef yacht to explore the living conditions that Clipper Race crew face during their circumnavigation. The children were most interested by the difficult conditions when the boat is at a heel and Bob explained: “When we rocked the cooker so you could see the angle of heel that the boat goes to, I could hear the giggles and the excitement coming back from the iPad.

“Going to the heads (toilets) on board is quite a difficult process so I think there were more giggles when that process was being explained to them. They were able to see how we are living in a very confined environment and how teamwork and getting on with people is the important thing when sailing the boat.” 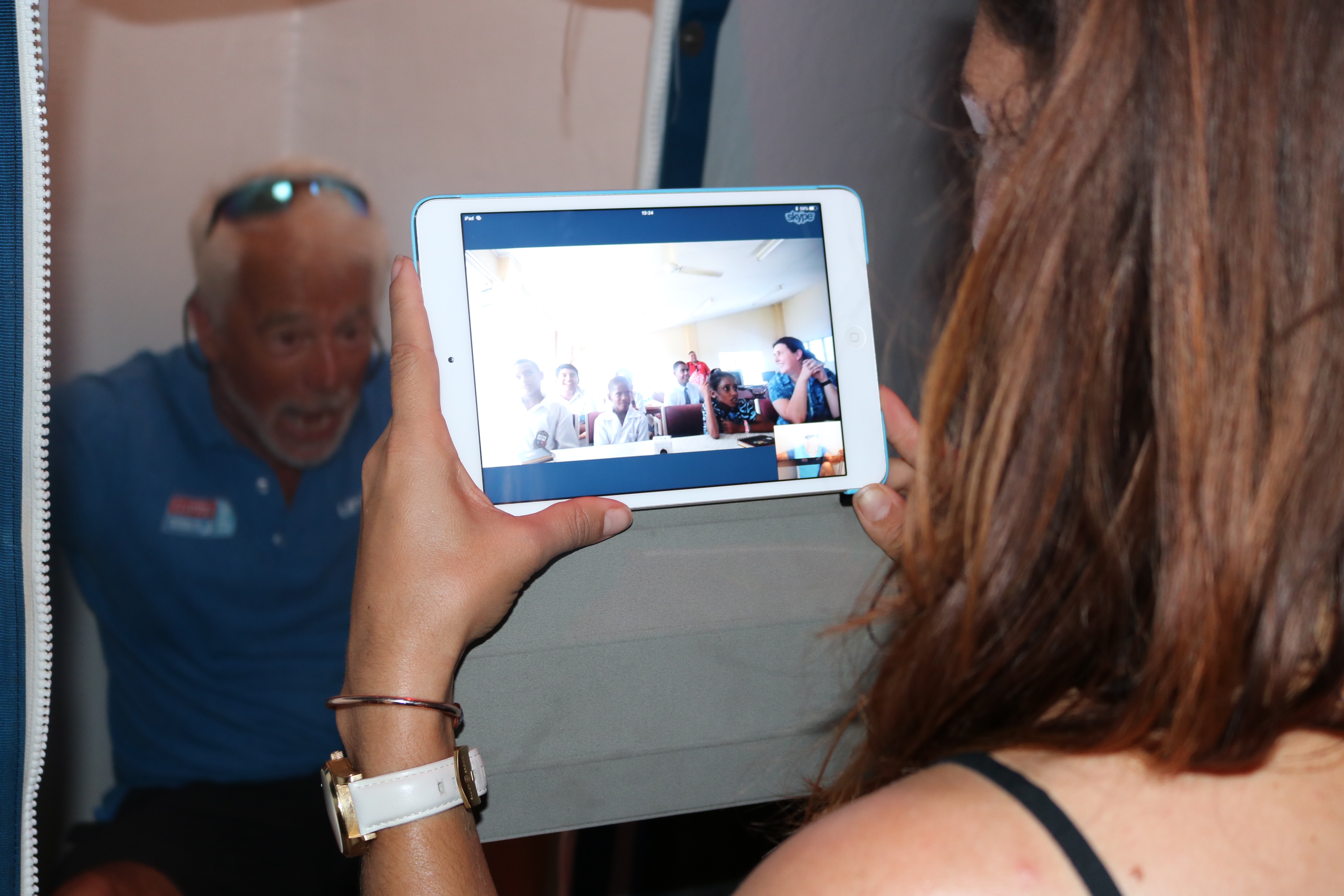 IMAGE: Crew member, Ed Gildea (Legs 2, 3 and 4) demonstrates the difficulties of living life at a heel!

Nicola added: “There were cool things about the boat that they got to see and that they found exciting, which was great but actually, I felt more inspired by them. I was in tears at the beginning, thinking about how great they were, representing their country in trying to promote the dangers of climate change. It’s great if we were able to inspire them in terms of trying to make the most of their lives but actually I felt more inspired by them more than anything and it gave me some motivation to change some of the ways that I live my life.

“Being on the boat, you find that you are a bit more connected with the environment and I’ve found myself that I need to think a little bit more about what I am doing on a personal level to the environment to make it better for them.” 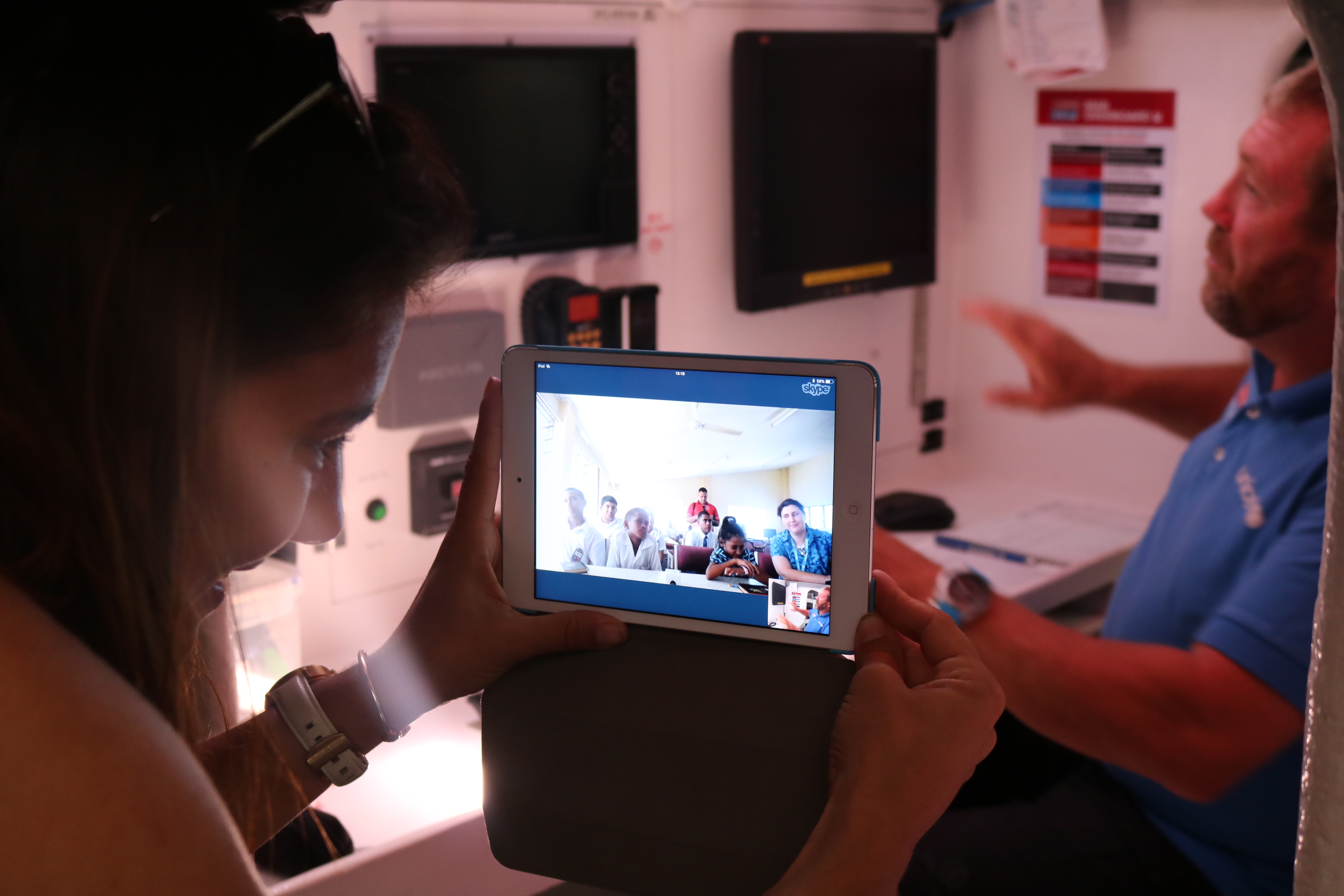 Upon signing off, Skipper Bob Beggs said that the best wishes from the children will help to spur his crew on to greater success during the rest of the team’s circumnavigation and that they will not forget the importance of what they are doing to help turn around the lives of disadvantaged young people.

Over half of the £400,000 fundraising target for Unicef has been raised during the Clipper 2017-18 Race so far but as the teams embark on the rest of its 40,000 nautical mile adventure, it is important that momentum is not lost. You can donate to Unicef, or set up and link your own fundraising page, via our JustGiving page to help reach our target before the Clipper Race fleet arrives completes its circumnavigation in Liverpool on 28 July 2018.