Kicking off the first of the naming ceremonies, the official Clipper Race charity Unicef has named its yacht in the St Katharine Docks Race Village.

The Unicef team yacht has been donated by the Clipper Race to mark the event’s tenth edition and to help raise crucial funds and global awareness of Unicef’s works for children.

Addressing the crew and guests from on board the Unicef team yacht, David Bull said:

“We are very grateful to everyone involved with the Clipper Race for working with Unicef on this unbelievable challenge. We’re especially grateful to Jim Prendergast who is going to lead this wonderful boat and surely bring it home to victory!”

As the crew cheered in agreement, he added: “Children around the globe are facing challenges every bit as dangerous and difficult as the ones the crew are going to face as they make their way around the world. Many children currently face the dangers of violence, disease, hunger and the chaos of war and natural disaster.

“Unicef exists for every child in danger. To try to protect and support them, and give them the opportunity to fulfil their potential in life, to allow them to flourish, to make a contribution in the societies in which they live, and ultimately make the world a better place.

“I would like to thank the Clipper Race for this unique opportunity and for working with Unicef to help change the futures of millions of children in danger around the world.” 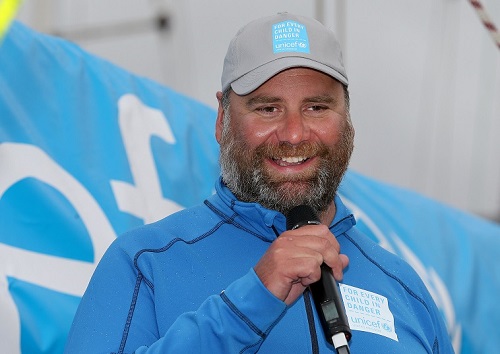 Explaining to the crowd how it feels to be leading the Unicef team, skipper Jim Prendergast remarked: “I feel very proud. It is a big opportunity to do some important work while we are having our adventure. Unicef is an organisationthat everyone around the world knows. If as a team we can not only have a successful race together, but also raise funds and awareness for Unicef, it will be a tremendous achievement.”

Round the world Unicef crew member Neill Hadden, 37, a teacher from London, has already raised almost £600 for the charity so far. He says: “When I first found out I was on the Unicef boat, I didn’t really think about it too much to be very honest. I was quite wrapped up in the fact I was training and preparing for my own huge journey.

"However as time has passed and the more I identify as part of the Unicef team, the better I feel about it and the prouder I am to be on this team more than any of the others. It feels very exciting as it gets closer now.”

Clipper Race crew and supporters have already raised over £47,000 for Unicef before the adventure has properly got underway. The Clipper Race aims to raise more than £300,000 in total. That money could protect 200,000 children from polio, provide 890 emergency water kits, or 20 temporary schools or health centres for survivors of natural disasters like the recent Nepal earthquake.

Click here to donate towards the Clipper Race Unicef campaign to help children in danger around the world.

After their global adventure some crew go back to their previous lives and occupations, some decide on a future in the marine industry, and some take time out to assess their next move in life or make a total career and life change – but…

As the international Clipper Race crews prepare for the race of their lives, they are also fundraising and supporting the…