In a result that will delight its home port, Visit Seattle has secured second place after holding off a challenge from GREAT Britain in Race 10: The Garmin American Challenge from Seattle to Panama.

Despite racing over 3,000 nautical miles (nm) and 18 days, less than an hour separated Visit Seattle and GREAT Britain at the finish.

Skipper Nikki Henderson and her Visit Seattle crew were highly competitive throughout the race down the western USA and Mexican coastlines, with the team never dropping out of the top three. And Visit Seattle kept up the pressure right until the end, following race winner Dare To Lead across the finish line at 0031. 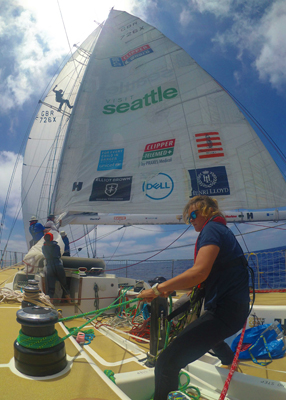 Skipper Nikki Henderson said: “What a finish! The last 24 hours have been such tight racing - and so tense.

“Really testing light-wind conditions that required immense levels of concentration and commitment - on the helm, trimming and tactically. This morning (anyone who has sailed with me will know these moments) I think we did about 10 gybes in an hour - just trying to work out which was the better course for wind and direction.

The heat,light and variable winds, especially in the Intertropical Convergence Zone, were a constant challenge for those aboard Visit Seattle throughout Race 10 and Nikki added: “There was definitely luck involved as there always is in sailing, but the crew worked so so hard and they deserve the second place.” 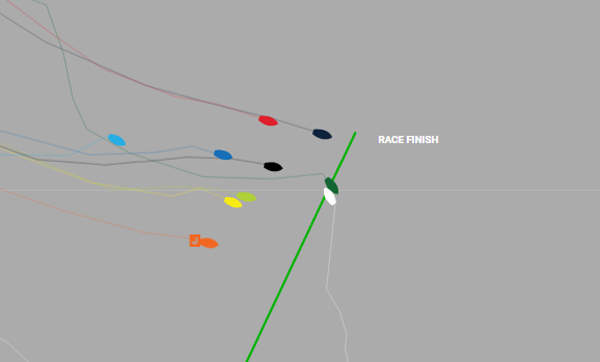 As well as the eleven points for finishing second, Visit Seattle will also add four bonus points to its Race 10 tally after picking up two points in the Scoring Gate and one point for being third fastest in the Elliot Brown Ocean Sprint. The 15 points will keep the pressure on the race leaders, Sanya Serenity Coast and Qingdao, as Visit Seattle went into Race 10 in third place in the overall Clipper Race

GREAT Britain pulled of the ultimate comeback by taking the third and final spot on the podium. On the final full day of racing, GREAT Britain was in eighth place but navigated the light winds skilfully to cross the line 53 minutes behind Visit Seattle at 0124 UTC.

GREAT Britain Skipper Dave Hartshorn said: “That was a great race and the GREAT Britain team never gave up, even when we were behind in the rankings.

“Racing in such light conditions is a lesson in patience and everyone onboard pulled together and thoroughly deserve this success.”

This is the second podium finish for GREAT Britain, with the team also securing second place in Race 3 from Cape Town, South Africa, to Fremantle, Australia. The ten points for finishing third will be a big boost for GREAT Britain, which went into Race 10 from Seattle to Panama in seventh place in the overall standings. 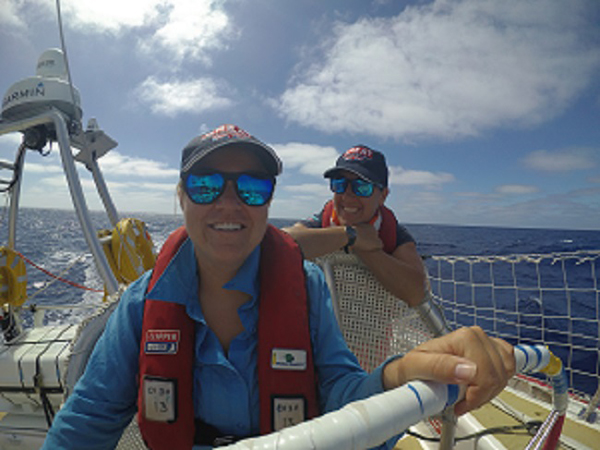 IMAGE: Jayne at the helm of GREAT Britain

Pip O'sullivan, round the worlder, from Hampshire said: "It is an incredible feeling to achieve a podium finish! Very exciting. To be recognised for all our hard work is fantastic. Sweating away on the grinder for hours on end is totally worth it now!

"As the race progressed, we just tried to do the simple things really well and that seems to have paid off. Obviously putting the boat in the right place helped as well, but our attitude on board has been to work hard and have fun and that mantra has got us onto the podium! "

To follow the progress of the rest of the fleet in Race 10: The Garmin American Challenge, keep an eye on the Clipper Race Viewer. You can also read about life on board during the final moments of the race in the Skipper Blogs and Crew Diaries.

After crossing the finish line, the Clipper Race fleet will motor sail towards a scheduled re-fuel stop in Costa Rica, before continuing on to Flamenco Island Marina on the Pacific Ocean side of the Panama Canal. After traversing the Panama Canal – one of the real highlights of the 40,000nm circumnavigation – the teams will regroup for Race 11 to New York which will start on Sunday 3 June.