The Clipper Race has revealed that the ‘Islands and Sailing’ city of Zhuhai, China, is to become a Host Port and Team Partner following a multi-million pound three edition deal.

The debut partnership was made official at a signing ceremony in Liverpool, UK, and will see Zhuhai, along with Jiuzhou Holdings, feature in the 2019-20, 2021-22 and 2023-24 editions of the global event. 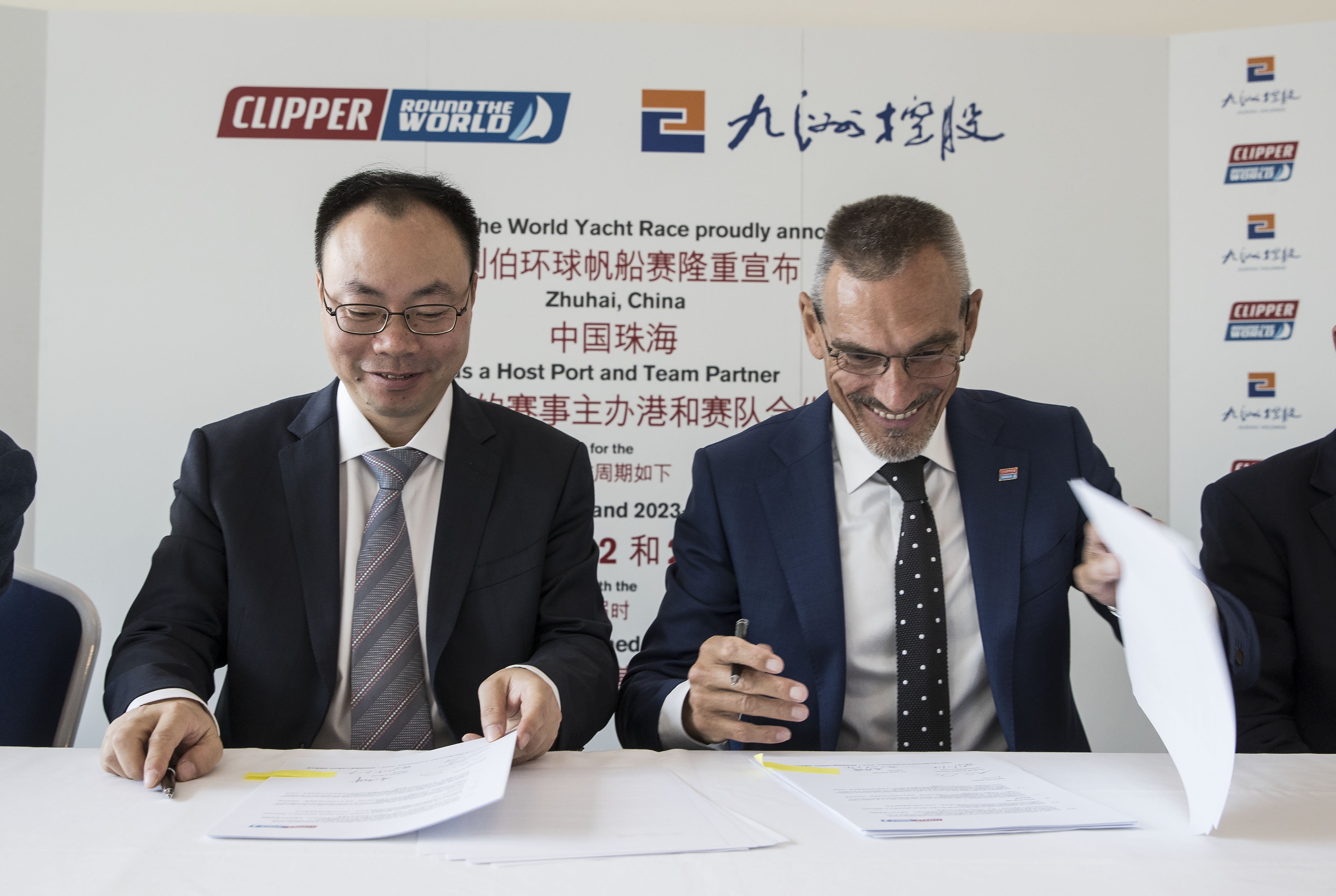 Speaking after the ceremony, William Ward OBE explained: “I’ve visited Zhuhai a number of times over the past few months and have been very impressed for a variety of reasons. Located close to Hong Kong, Guangdong and Macao, Zhuhai is a place with strong geographic advantages, beautiful islands and coastline, excellent wind conditions for sailing, convenient transportation, and a comfortable climate, which are all crucial for water sports and tourism development.

“The Clipper Race’s three race partnership with Zhuhai will not only provide a memorable and enriching cultural experience for our crew and race spectators, but the city of Zhuhai, will also greatly benefit from projecting its brand message around the world via our unique global sports and business platform.”

Zhuhai Jiuzho Holdings already has extensive experience in hosting major sailing events, including the 2016 and 2017 China National Sailing Regatta, as well as its own ‘Jiuzho Cup’. Utilising its new Clipper Race platform, Zhuhai Jiuzhou Holdings aims to enhance its sailing development and promote its renowned ‘Islands and Sailing’ image to the rest of the world.

Zhuhai also has one of the largest yacht-build bases in China, and this new partnership will bring further development opportunities for the city’s boat building industry.

“Zhuhai is also a city of rich leisure and tourism, with its beautiful island surroundings. Our water sports are in an important development stage and we believe that a partnership with such a noted global event as the Clipper Round the World Yacht Race will help speed up our sailing development as we promote our ‘Islands and Sails’ capabilities to the world.”

The inclusion of Zhuhai in the Clipper 2019-20 Race will see three stopovers in China, as it joins existing Host Port Partners Sanya, located in the south of the country, and Qingdao in the north. The rest of the Clipper 2019-20 Race route will be announced over the coming months as the organisers now switch focus on planning this next edition, which will start next summer.

The Clipper Race fleet will be berthed at Zhuhai Jiuzhou Marina during the stopover, which is expected to take place in early 2020. The team, which will include international crew members as well as selected Zhuhai Ambassador crew, and Skippered by a professional sailor, will be named after Zhuhai.

On the expanding feature of China in the Clipper Race, its Chairman, Sir Robin Knox-Johnston, said: “Sailing is experiencing rapid, enormous growth in China, and the opportunities for British businesses to be involved in helping to facilitate this is truly exciting.

“Zhuhai is our third and final Chinese stopover. The Clipper Round the World Yacht Race, which is now the most recognised sailing brand in China, is committed to helping promote the country’s international sailing reputation. Zhuhai will build on the positive image that Qingdao and Sanya have developed over many years as the flagship centres for its event hosting and tourism.”

Planning will now commence for the Clipper Race’s first visit to Zhuhai, which will feature impressive welcoming and prize-giving ceremonies for crew members and their supporters, as well as local cultural activities and experiences.

For more information on Zhuhai, go to http://www.cityofzhuhai.com/