After racing over 40,000 nautical miles around the world, the Clipper Race fleet and some 180 intrepid Race Crew sailing on the final leg of the ocean adventure arrived back in London, UK to an incredible Race Finish celebration to mark the completion of the epic circumnavigation. On Saturday 30 July, some 5,000 people gathered in London’s Royal Docks to welcome the fleet home and celebrate the success of the intrepid Clipper Race Crew.

Ahead of the finale, Race Partners and VIPs gathered for a celebratory dinner hosted by Sir Robin Knox-Johnston and William Ward OBE. ‘The Unstoppable Journey Dinner’ was held at City Hall in London, with a speech from Sir Robin. The event was a brilliant opportunity for the Race Partners to come together, and offered a chance to celebrate the achievements and share experiences of partnering with the Clipper Race. 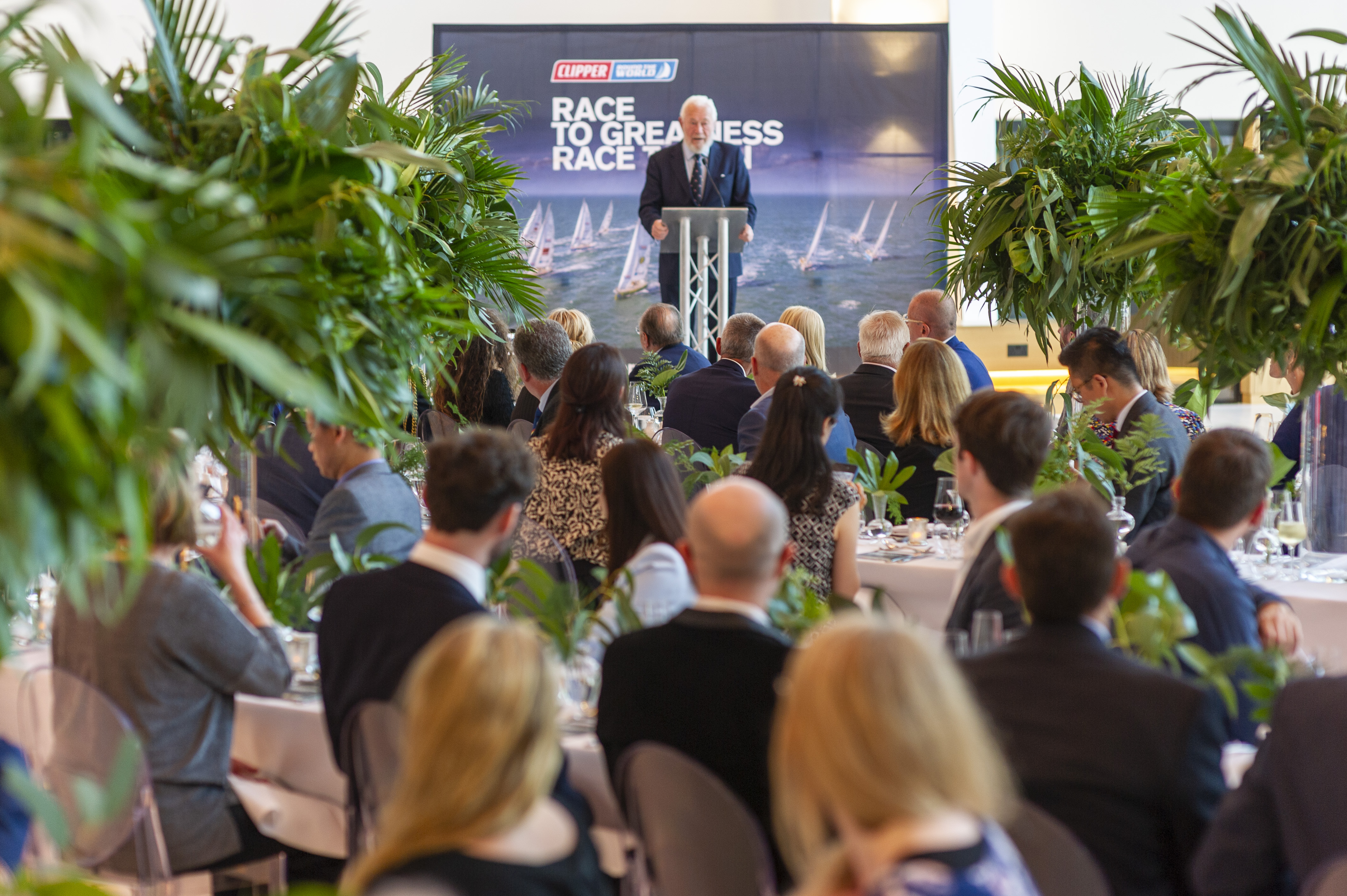 Image: Race Partners and VIPs gather for a celebratory dinner at City Hall before Race Finish

London’s Royal Docks played host to the Clipper Race Finish celebrations. Ahead of the fleet’s arrival, Clipper Race partners, alongside Ambassadors and Delegates from London, Vietnam, Philippines, China and Uruguay gathered for a lunch at London Regatta Centre’s Yi-Ban restaurant to mark the completion of the 2019-20 edition. 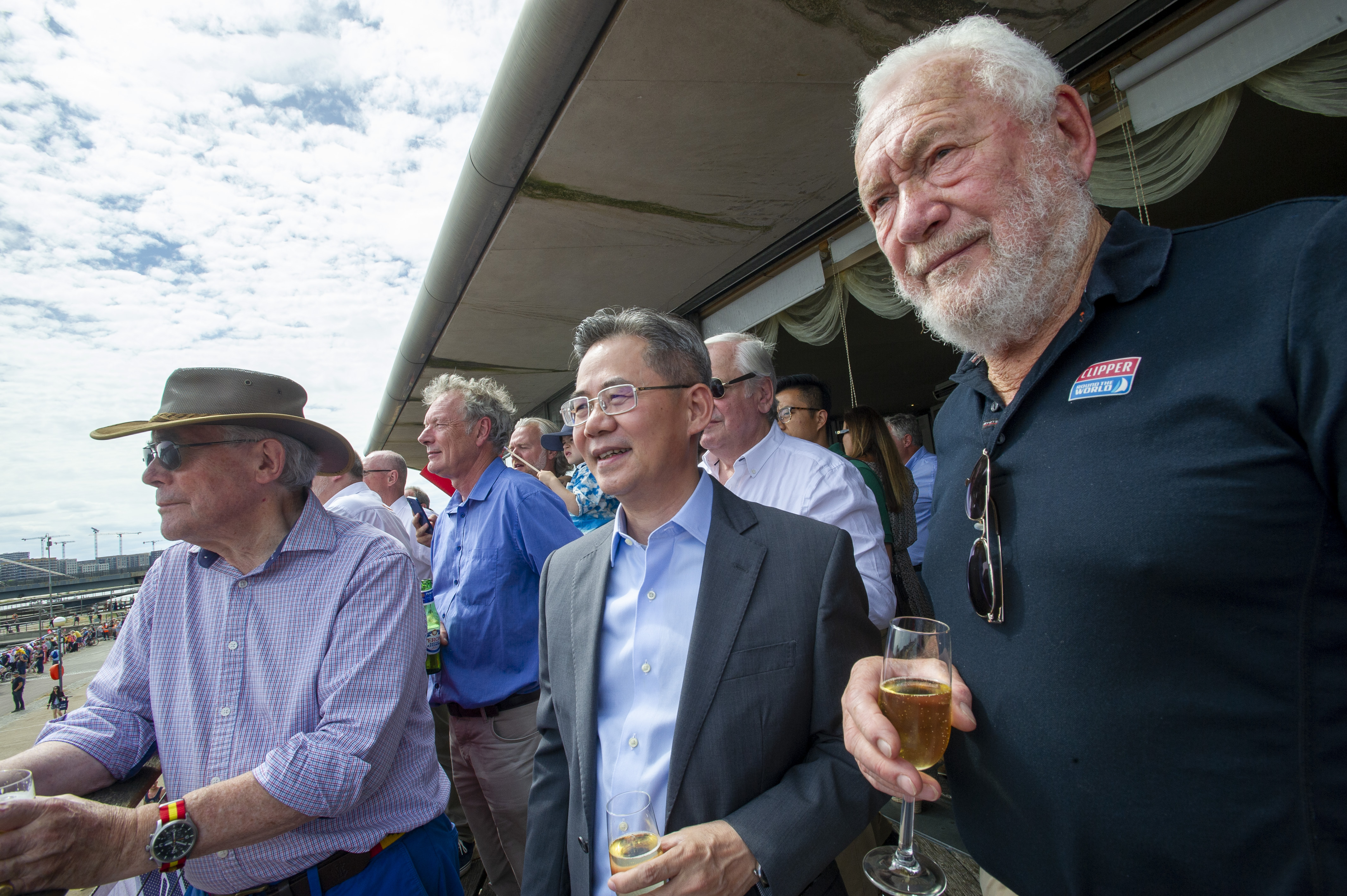 The docks were filled with food stalls, street performers, sea shanty choirs and plenty of live music and entertainment, generating an incredible atmosphere for the entire day. The Clipper Race Dome was also open, providing the opportunity for people to learn more about the epic ocean adventure, speak to Clipper Race staff, and even practice knot tying skills at one of the Marlow Ropes stations and view footage of the teams at sea on the interactive Dell big screen. 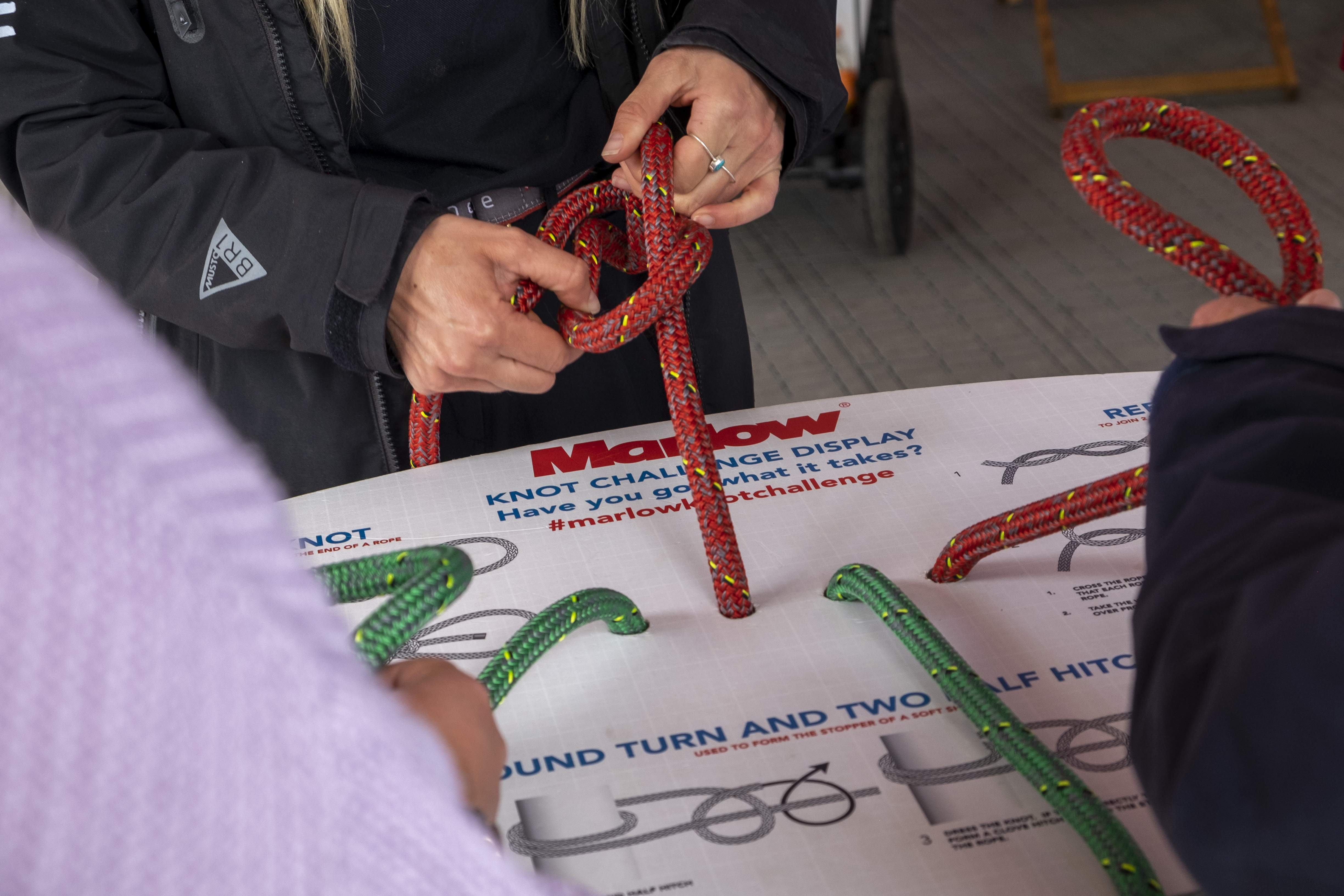 After a spectacular Parade of Sail along the River Thames, the jubilant teams were welcomed into London’s Royal Docks in the afternoon by a huge crowd of family, friends, partners and spectators creating an electric atmosphere for their arrival. 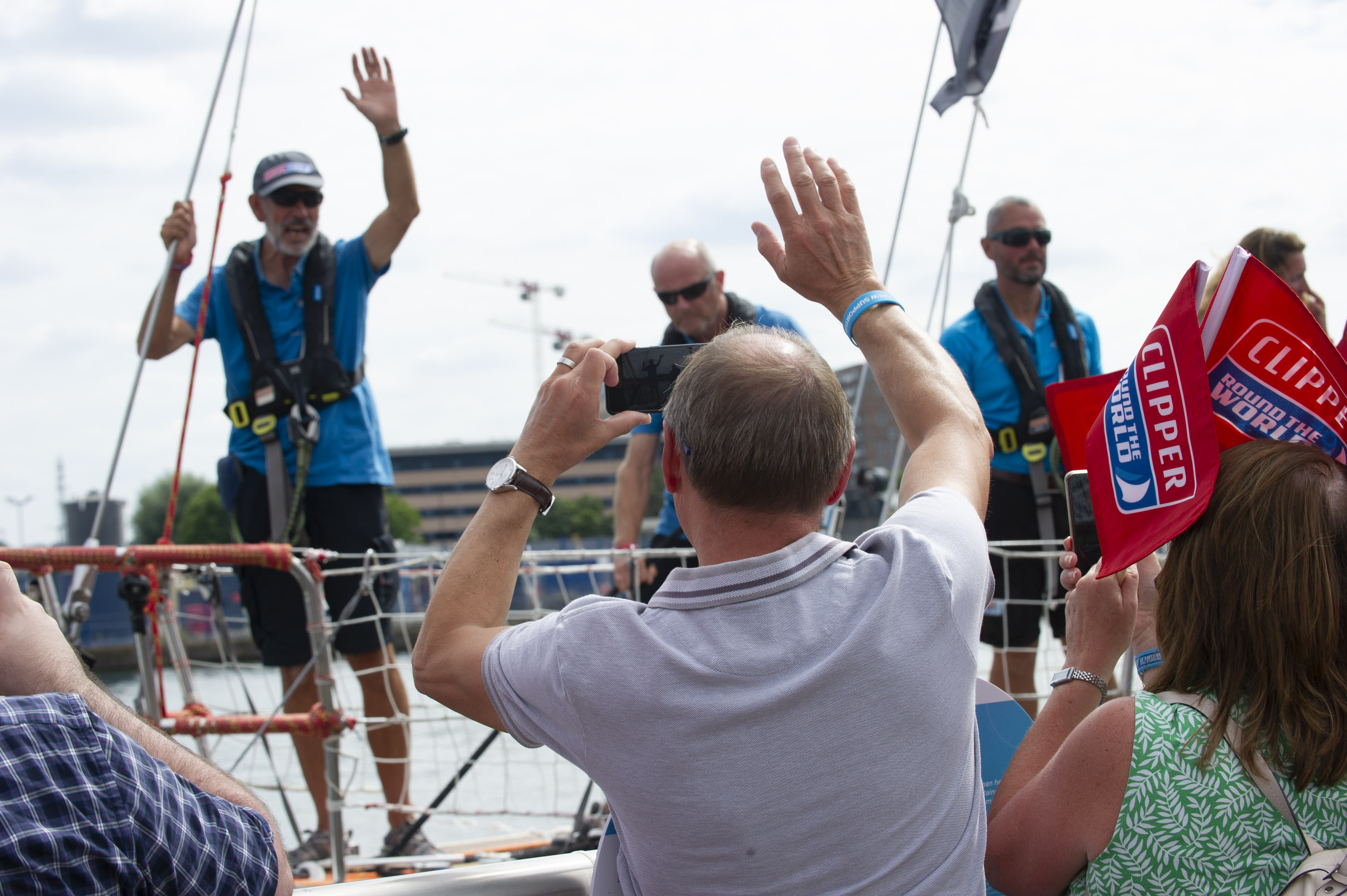 Image: Clipper Race Crew are welcomed to London by cheering friends and family

Once docked, the Clipper Race finale celebrations got underway with the overall Clipper 2019-20 Race Prizegiving - the perfect chance to celebrate each team’s success. Working up the leaderboard from eleventh to first place, the teams took to the stage, with partners and delegates invited to join their teams onstage, celebrating with cheers, chants and champagne sprays. Congratulating their respective teams on their podium positions were delegates from the Vietnamese Embassy, including Dr. To Minh Thu, Deputy Chief of Mission/Counsellor to congratulate the Ha Long Bay, Viet Nam team. Yacht Club Punta del Este Commodore Juan Etcheverrito joined the Punta del Este team on stage for a huge celebration and champagne spray. 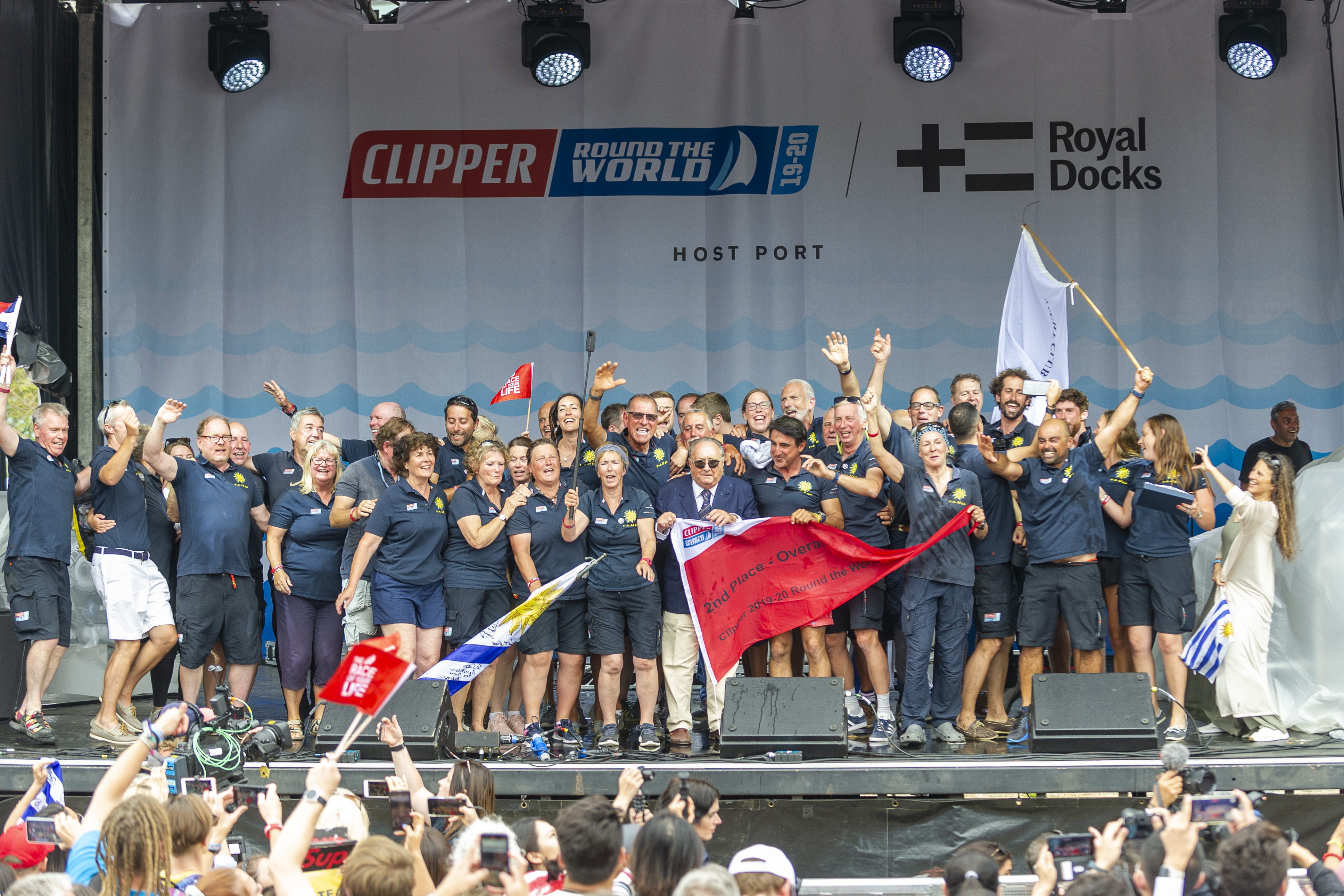 Once ten teams had graced the stage it was then the turn of the overall Clipper 2019-20 Race winners, Qingdao, to have their moment and celebrate the victory. With 145 points, the Qingdao team was ten points clear to take victory in the overall standings, and it was a tremendous moment as the team stepped on stage, with His Excellency Ambassador Zheng joining the team to present them with the prestigious Clipper Round the World Yacht Race trophy.

Following the prize giving ceremony, festivities continued with a public festival and crew party in the grounds of Royal Albert Dock; a chance for families, friends and former teammates to reunite, reflect and celebrate their momentous achievement.

You can catch up on the action from the Parade of Sail to the Prizegiving on stage here: clipperroundtheworld.com/livestream