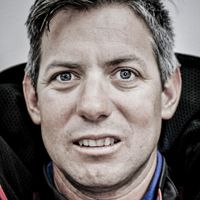 We have had a good day, pressing slowly south against head winds down the beautiful Irish coastline. Earlier we managed to ensnare ourselves on a lobster pot and after a bit of faffing around, some 360's and the liberal use of a sharp knife, we relieved ourselves of its burden. Shortly afterwards we found ourselves being hunted down by a fast RIB but fortunately it was only a couple out to give us a friendly Irish wave and some encouragement.

Dare To Lead has never been fantastic upwind, probably due to us pushing our Yankees far too hard in the Southern Ocean earlier in the voyage, but we have managed to stay with the fleet so far by some good tacking decisions or luck or both.

It is quite a leg for reflecting over the past eleven months and being back at sea after a great two weeks in Derry-Londonderry, perhaps a reminder of how nice a break will be from the hardships of upwind sailing. However, much will be missed. The amazing friendships and community we have shared, the freedom of the ocean and its ever-changing moods, the privilege of seeing the world (or lots of oceans of the world!) Perhaps though, the largest part of what I will miss has got to be the waking up every day, knowing that you are partaking in something life changing and the knowledge that we only have a handful of opportunities in life that make you feel like you are truly living and that this has been one of them.