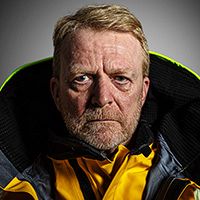 I never cease to be amazed by the ingenuity and resilience of people who go to sea. I worked for a while on a cruise ship with an operational crew consisting mainly of Russian and Ukrainians, whose outside-of-the-box thinking when faced with problems was a constant source of wonder and inspiration to me. Those guys could fix anything with chewing gum, a paper cup and an elastic band. The paper cup was generally only used to contain the vodka to stimulate the thought processes!

Crossing an ocean in our small boat means, first and foremost, that we must be independent in every way. We must carry adequate supplies to sustain the crew for the required time, and the right equipment to take care of the vessel, including spare parts and tools to fix the myriad of breakages, equipment malfunction or just routine maintenance which occurs on any boat on a regular basis. With limited storage space available, there are inevitably many situations for which one cannot mitigate, especially a problem which has never, ever previously been a problem! We were faced with one such situation a couple of nights ago, when I was woken from a deep slumber by Angela with the words: “I think we may have an issue!”

Part of our port side steering gear needed some attention, although fortunately, the function of the steering was not affected. With little room to work and without the right tools to tackle a proper fix, we were faced with the challenge to come up with a solution. The usual first port of call in such a situation is to call Jay, in charge of maintenance for the fleet, on the satellite phone (so much for total independence!) whose exact words at 1:30am I cannot repeat in this forum, but something along the lines of “I have never known this to occur before!”. After several useful suggestions from him, Angela and I made camp in the lazarette with as many tools as we could find and set about trying to fix it. To cut a long story short, several cable ties, a length of seizing wire and a whole lot of ingenuity later, we have fixed the offending part back into place, and we are once again racing fast towards Northern Ireland.

The paper cup was not necessary, we have no vodka!

All is well on Dare To Lead...