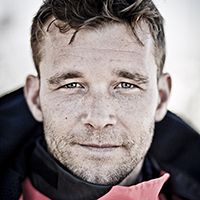 MMhhhmmm...well well, well, ...bad day at the office! How many things happened in the last 24 hours? I am not sure anymore to be able to count how many issues we had.

I think it started with what we call, ah yes, squalls, at the beginning of the night. The wind was pretty light, we were under Code 2 (mediumweight spinnaker) because the wind was more consistent just before that, then the lazy sheet of the spinnaker fell slowly in the water by inattention, resulting in all the sheet being trapped under the hull and due to the force this line cut by ragging effort the tack line of the spinnaker. I managed to get the working sheet back in between the foot of the main and the boom, which we call that a letterbox drop.

The pirates of course rushed to come and help, and we get that spinnaker down and the sheets back onboard. The thing we are doing here is called a "race" so we then hoisted the Code 1 (lightweight spinnaker), the wind was pretty light like less than 7 knots. I get to bed, then around an hour later, Bill Lyons came to tell me that the wind was increasing. I looked and saw 14-17 knots, which isn't that strong. I thought we could manage a couple more hours with the Code 1 as I was pretty tired. Now actually it was a squall (actually pretty clear on the radar). Not even 30 seconds later the boat started to heel and I heard Michael Brien screaming for some ease. I jumped into my lifejacket and in that same time the crew told me, the Code 1 exploded... Ooops! All together in the heavy rain and a pitch black night we managed to get the tissue back onboard. Ouf!

The squall was not that strong as all the others ones, so let's keep racing and let's put the Code 3 (heavyweight spinnaker) up. I came then below to check the radar and a minute later I felt the boat starting to turn in the wrong way and the heel in the wrong side, meaning: crash gybe. I jumped at the wheel, giving calm orders, "everybody down and away of the cockpit cautionary zone”. I finally managed to get the boat back on course using a wave to roll the boat on the correct tack. I asked if everybody was ok, all fine. The rain was on, the wind was what we say, all over the place and the sea state too. Our Bill was of course devastated thinking it all her fault but, I tell you, conditions were tough so we gave her a cuddle as no one else in this team would avoid that. She is one of our best drivers. In the same time or just a bit later was the watch change over. Michael and Bill as always asked me if they should stay if needed, always there to help, they are incredibly committed to the team and myself. I reassured them and ordered them to get some well-deserved sleep to get ready for the next watch before being over tired.

Next watch started to get the boat in hand, we nearly broached a couple of times and I had then to take over as really the conditions were not easy, even for me. Flying between 12 and 16 knots in the darkness using just the windex and the luff of the spinnaker.

Finally, the day arrived, the rain disappeared, the wind turned dramatically to the south west when expecting east south east... So, we gybed, all good on that. I gave the helm to Nell Wyatt who is also one of our best drivers and I get to bed. It was nearly time for another watch changeover.

Couple of hours later, Michael B wake me up to say that the wind dropped, so they dropped Code 3 and hoisted Code 2. I tried to close my eyes again and Michael came again and said we are stuck and drifting towards four fishing nets according to AIS (here in these waters it is part of the fishing, nets long of 10-15nm all over the place, with a transponder or not).

There we are in no wind, stuck in a wind hole drifting towards nets...nice! What next?

Dropped the Code 2, flapping around, hoisted Yankee and Staysail, and then slowly the wind came back from the north and we were close hauled on course avoiding the nets. We passed one of the nets and it looks like a fishing cane with a little white ball, barely visible in day in good visibility... Looking for the next night I tell you!

The wind then turned and allowed us to get the Code 2 back on, just before the hoist I noticed that the spinnaker block at the top of the mast wasn't turning properly, so let's go aloft! Indeed it was twisted, sort it out, came down. l hoisted the kite, and the team told me nervously, "GT, you have to do your blog!"