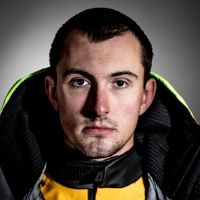 So, it’s not been the best day on record for team Visit Sanya, China. Yesterday morning, we were looking forward to the end of the Ocean Sprint and hoping that our overall race strategy would pay off rather than going for the sprint. Then we decided to hoist the Code 2 Spinnaker… and ever since then it has been wrapped around our inner forestay, a sorry sight to say the least. As I said to the crew, it was no one person’s fault that it happened, more a series of unfortunate events. We’ve had the Yankee 2 up since then and making some progress towards Portimão.

The plan, as it stands at the moment, is to wait until day break to try and get it off. The wind should be much lighter than yesterday so a higher chance of success. Will Cowell, our resident Canadian, has admitted, in a life before the Clipper Race, he was a fisherman on the Great Lakes and untangling hundreds of metres of nets was usual practice for him so he is going to be numero uno up in the morning.

Other than that it’s been quite peaceful on board. Rick made some great cake today (just a packet mix I know) but great cake nonetheless. So we plod on waiting for day break then it’s game on again. Either way this kite is coming down in the morning.