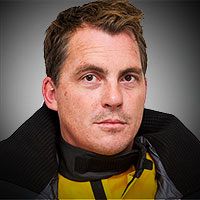 Good morning Black Betty fans, fear not you shall not have to finish this short race without at least one more fix of my witty banter, for I have returned, I have fought off the dreaded man flu and I am back. For the last 2 days all I have wanted, in quick succession was a hot bath and a viciously cold air conditioned room, neither of which we have in great supply on Black Betty so I have had to make do with lukewarm water and a blanket. Dan and the team have done a cracking job at keeping Black Betty chomping along over the past few days while I have been skippering from my bunk. The joining crew members have settled in nicely and we are back into the swing of things out here. This short course has seen us face all points of sail in a few short days on the water, and with this we have had a crack at a varied selection of evolutions too. We are now on the final leg of this triangular course and our second Dell Latitude Rugged Ocean Sprint of this race, with only 145 miles to the end of said sprint. As you will know we opted for sprint numbers 2 and 3 for our entries, but the racing has been so close it's anyone's guess as to whom will come out on top on each of them.

We currently find ourselves, and the whole fleet, in a very unusual situation. We are West of Luzon island and we have wind, plenty of it too. This is far different sailing from the previous passages in the south China sea, but I'm pretty sure this won't last all the way in sadly. As we close in on the coast line I think the breeze will soften, and with the fleet still pretty tightly packed there could be a big reshuffle just before the race track is all used up

In other news, I am coming to you now from my fancy new bluetooth keyboard/mouse combination that I treated the boat to in our last stop in Subic Bay. It's so refreshing not to be constantly playing 'untangle the wires' in the nav station, it really is a game changer. We often say that being at sea makes you appreciate the smaller things in life, I guess this is one of them. Also, tragically on our last race Terrance the toaster popped his final slice which left us toastless (unless you ask BenGERMAN as apparently in Germany sliced bread is called toast even when it is yet to be toasted....I know, that makes no sense to me either). Another fancy new addition to the team was made in Philippines in the way of a beautiful new Terrance so breakfast times have returned to the standard we expect here aboard Black Betty.

With less than 200 miles to go the chat on deck turns to shore, cold beers, medium rare steaks, air conditioning and showers, even though we have only been at sea for a handful of days those are all still luxuries we don't have. See you on the dock (Facebook live) some time tomorrow.