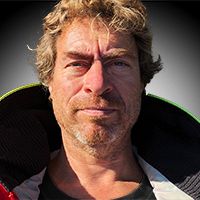 First of all congratulations to Qingdao, Ha Long Bay, Viet Nam and Imagine Your Korea on their points for the scoring gate. Imagine Your Korea, we thought we had it in the bag, but you guys put up a good fight and then we managed to sail into the only area of absolutely no wind in the entire Roaring Forties! We came to such an abrupt stop, just before the scoring gate that Qingdao actually contacted us to find out if everything was OK and we hadn't broken anything! Thanks for the concern!

There really is a great amount of sportsmanship between the teams in the Clipper 2019-20 Race and it is good to know that in such an isolated part of the world our competitors are also well aware that in the case of need they could also be our closest assistance. Anyway, well done once again to Imagine Your Korea, in particular, for a good match race until then.

The hole in the wind was caused by a ridge of high pressure between two frontal systems with associated gales. The first gale was yesterday morning with winds to just over 40 knots when the barometer dropped to 1000 mb. It then rose extremely slowly to just 1003 mb, giving a very slack pressure gradient, hence the light winds, and now it has fallen like a rock falling off a cliff! It now stands at 987 mb and is still falling. This morning, the wind began to fill in slowly, and as we are still in the warm sector ahead of the frontal system, with relatively warm, moist air blowing over a cold sea, the fog quickly set in, reducing visibility to almost nothing. The fog then gave way to rain and drizzle as the wind continued to build. Finally, we are doing a reasonable course and speed again with a reefed mainsail and no doubt we will soon reduce the sails even more as the weather will surely strengthen considerably with the barometer dropping like this.

The crew has just reported seeing whales this morning while I was asleep.

James Finney is on deck for the next half hour overseeing things for me. (He has already been out there for three and a half hours). Melodie Shaffer's watch came on an hour and a half ago. Melody is one of our top helms and most experienced sailors, but she is also proving to be a great photographer, so right now she is chatting and taking photos while Rein Drescher takes the helm. Rein is the backup helmsman for the watch as he seems to have a natural feel for the boat despite his having less experience. We also have two circumnavigators on this watch - Ina Baum and Trevor Thurlow - who provide mentorship to the new crew, as approximately half of the crew change at each stopover, so it is useful to spread the more experienced hands between the three watches to ensure continuity of work systems aboard Zhuhai. The final member of this watch is Chris Ball - very aptly named as he bounces around the deck like a ball, but continuously looks for jobs that need to be completed. As he works in the movie industry with props and continuity he has a great eye for detail, which is useful on deck, too!

We are now closer to Fremantle than we are to Tristan da Cunha (which is halfway across the Atlantic!), so we are definitely making some progress across the Indian Ocean, but it certainly is a big ocean!

The standby watch have just made pancakes for breakfast, so I need to sign off now. Sorry.