“Worn out but absolutely ecstatic.” The emotion on Simon Parker’s face and in his voice is clear as he finally arrives into Liberty Landing Marina. Like his fellow Clipper Race crew, he has just completed the Leg 7 US Coast to Coast race from Seattle to New York, though Simon’s journey was an altogether different route and challenge.

After sailing across the Pacific Ocean in Leg 6: The Seattle Pacific Challenge on board Garmin, Simon then, as you do, decided to cycle race the Clipper Race fleet almost 4,000 miles to the marina in Jersey City, which stands just across the water from Manhattan.

He has cycled through Washington, Idaho, Montana, South Dakota, Nebraska, Iowa, Illinois, Indiana, Ohio, Pennsylvania and finally New Jersey, with no support crew, and he did it all in just 48 days, arriving the day before the first Clipper Race yachts, getting to greet see his former crew mates into port. 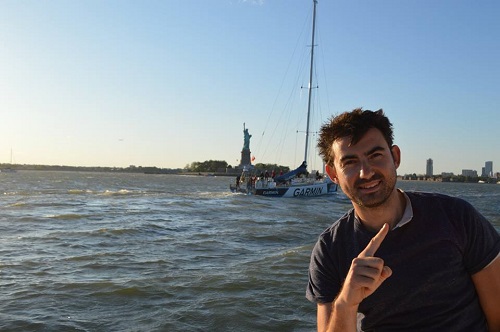 "It's hard for me to fully comprehend the distance I've just covered,” says Simon as he takes a deep breath. “It all feels like a huge blur of ups and downs - both geographically and emotionally. Just seeing Manhattan in front of me is enough, though, and it's a sight that I've been visualizing in my head since this idea began taking shape a year or so ago.”

Throughout the trip Simon has traversed both the Rocky and the Appalachian Mountains and experienced almost every condition imaginable; including searing heat, chronic headwinds, tropical Storm Colin, freezing rain and biting hail, cramps, potholes which resulted in an unfortunate crash and cuts and bruises. Also crazed truck drivers and forgiving policemen who tried to stop him cycling down the hard shoulder of Highway 78 in his final miles. Most memorable of all however has been the kindness of total strangers who have provided him with refuge, comfort and friendship along the way. 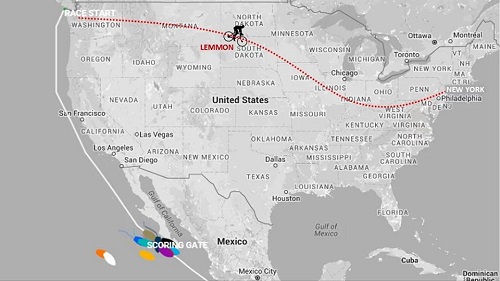 One of the most remarkable things about Simon’s journey is that he was not previously much of a cyclist and like 40 per cent of Clipper Race crew, he had also never sailed before. "I've always been fond of big overland journeys. I've driven 2,500 miles across India, bussed around South America and hitchhiked across Australia and New Zealand. But to see a country at such a slow speed is truly phenomenal. It allows so much time for contemplation and consideration of the world around us. And I love exercise, so that was a good start!”

Simon now has a little time to rest and catch up with his Clipper Race crew mates but the journey is not over. He will now need to find his sea legs again as he will re-join the Clipper Race, this time on boardUnicefto sail across the Atlantic Ocean to Derry-Londonderry. From Northern Ireland he will cycle to Den Helder in the Netherlands before finishing the race on board again for the final sprint and spectacular Parade of Sail up the River Thames in London.

On getting off the saddle and getting back to sailing, he says: "Now my attention turns to the small matter of the Atlantic ocean and getting to Northern Ireland without vomiting on too many of my crewmates. The ocean is for me the toughest challenge of the lot. Cycling across the USA was really, really tough, but I find the day-to-day grind of sailing to be harder. The Pacific Ocean was the most ghastly place on earth. I had moments where I just thought, we’re surely just not meant to be here?.

"After the freedom of cycling 14 hours a day, eating when I want, sleeping when I want and being my own boss, the dynamic of being with a crew will be interesting. But, that's the exact thing I came here to explore – that change between team and solo experience. So bring it on."

We first met Simon, fittingly, at the Telegraph Adventure Travel Show last February. A travel journalist looking for a new challenge and keen to test himself on a leg of the Clipper Race. As discussions went on, it was clear Simon saw the Clipper Race as a way to have an entirely different adventure within the challenge 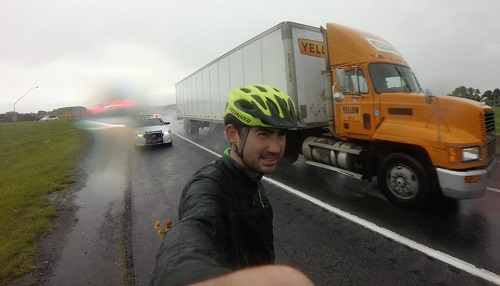 He explains: "This whole 'project' has been about exploring why people choose to break out of their comfort zones and take on big challenges. We live in a world where people are constantly looking for new ways to explore their limits through travel and endurance. Iron Men and Marathons are not abnormal any longer and so called normal people are doing more and more incredible things all the time.

“I am writing a book about human endurance but why just write it when you can try it yourself and be the subject? I’m not sure I fully understand why people choose to do this to themselves but I’m quite enjoying finding out and hopefully by the time I arrive back in London I might have some more answers!”

Click here to read about Simon’s experience in the Pacific Ocean on Leg 6 as published in The Daily Telegraph Travel section.

Click here to read Simon’s account of his first introduction into sailing on Clipper Race Level 1 training.
Interested in taking on an endurance test of your own? The Clipper Race is currently recruiting crew for the 2017-18 and 2019-20 race editions. Click here to find out more.

As the teams continue to arrive at Liberty Landing Marina after crossing the Race 11, LMAX Exchange – RACE

All of the Clipper Race fleet is now in Liberty Landing Marina after a busy day of arrivals into the Big Apple.Having crossed the LMAX Exchange - RACEof THE AMERICAS finish line at 2137 local time last night (0127 UTC this morning), Da Nang –…

One direct flight will take you from China to the UK in less than a day. But where’s the fun…