As the Clipper Race fleet covers the remaining nail biting miles of the US Coast to Coast Leg, it is not just the crew at sea who are giving it their all to make it to the New York finish line.

Cycling his way solo across the USA, Garmin Leg 6 crew member Simon Parker is pedalling furiously and digging deep to overcome the final challenging hurdle in his quest to beat his former team mates to New York.

Tired legs and still the extreme gradients of the Appalachian Mountains to conquer, Simon’s final miles look set to be his hardest yet, but after cycling almost 4,000 miles in under 50 days, and with the chance to beat the fleet still a realistic goal, Simon is showing some impressive determination.

In his latest blog, Simon reports:

“Day 46, USA: What a day. The sort of day that just drifts away into a huge blur in my tired brain. My legs are aching and my butt is sore, but today I clocked up a whopping 173 miles from dawn until dusk.

“I cycled for every single minute of daylight and pushed my body beyond anything it has faced before. I haven't come this far to be pipped to the post at the final hurdle. The Appalachians are gruelling and steep - and in contrast to the roads over the Rocky Mountains that wind around the range, here they attempt to go over them in a straight line. This makes for extremely tough gradients that require every ounce of mental and physical strength. It's amazing to think of the terrible shape I was in when I stepped off the yacht in Seattle, managing just 30 miles on my first day as I entered the Cascades.

“I've just pitched my tent in a hedge on the edge of a town called Lewistown and will get my head down until dawn. I'm just 250 miles or so from New York, covered in mud and grime - and it's pouring with rain. This is a fight to the finish and tomorrow will be another huge day. And to make this even more dramatic... My former team, Garmin, are heading the fleet. They deserve a win - but I want to be there first!”

Displaying his competitive spirit and dedication to the cause, Simon has cast off extra weight in the shape of his tent and reports that he spent last night sleeping in a bush. 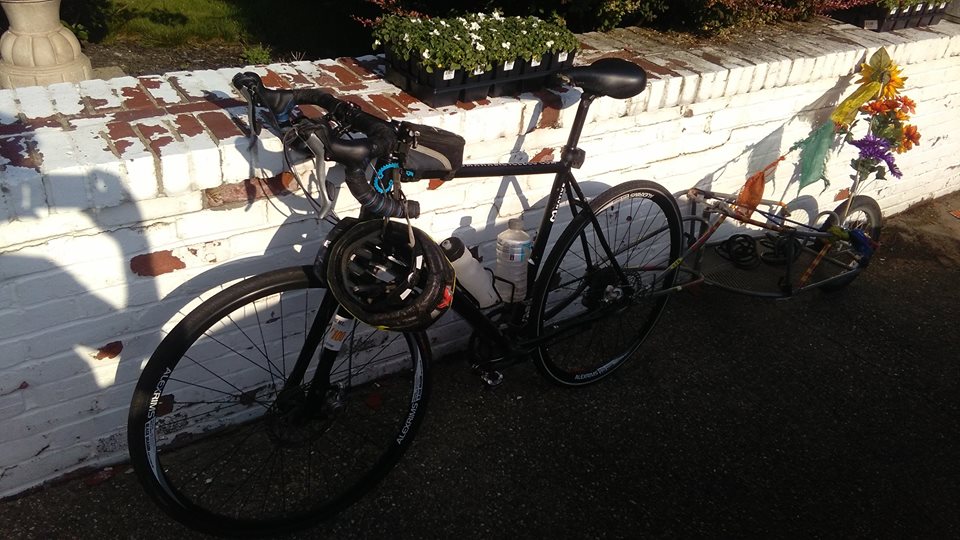 As if the Appalachian’s were not challenging enough, Simon has also experienced thunder and strong rainstorms as Tropical Storm Colin, the same weather feature which hit the Clipper Race fleet yesterday unleashed its force as it depared through the South East states of the US.

Simon Parker stepped off the Garmin team yacht in Seattle after completing the Pacific Ocean leg to begin his solo cycle race across America. Since then he has cycled through ten states (Washington, Idaho, Montana, South Dakota, Nebraska, Iowa, Illinois, Indiana, Ohio, and Pennsylvania) and averaged close to 100 miles a day. No mean feat for someone who had never cycled more than 400 miles in one go, and had never sailed before!

Along the way, Simon has overcome almost every condition imaginable including searing heat, chronic headwinds, tropical storms, freezing rain and biting hail, cramps, potholes which resulted in an unfortunate crash and cuts and bruises, crazed truck drivers and grumpy police; thought most memorable of all has been the kindness of total strangers who have provided refuge, brief comfort and friendship along the way.

Once in New York, Simon will not be resting for long and he will need his sea legs back as he jumps on board Unicef to sail across the Atlantic Ocean to Derry-Londonderry. From Northern Ireland he will cycle to Den Helder in the Netherlands before finishing the race on board again for the final sprint and spectacular Parade of Sail up the River Thames in London.

To follow Simon’s journey and work for the BBC World Service and Daily Telegraph, ‘like’ his Facebook page. He is also keeping his followers up to date from his Twitter account @SimonWIParker and sharing photos and videos from his journey, all recorded using his Garmin VIRB action camera.

Click here to keep an eye on the fleet's ETAs to New York.

One direct flight will take you from China to the UK in less than a day. But where’s the fun…