After the first four arrivals overnight day break has revealed Table Mountain in all its majesty. Four more teams are expected today as they battle to cross the finish line in this close-matched race to Cape Town. 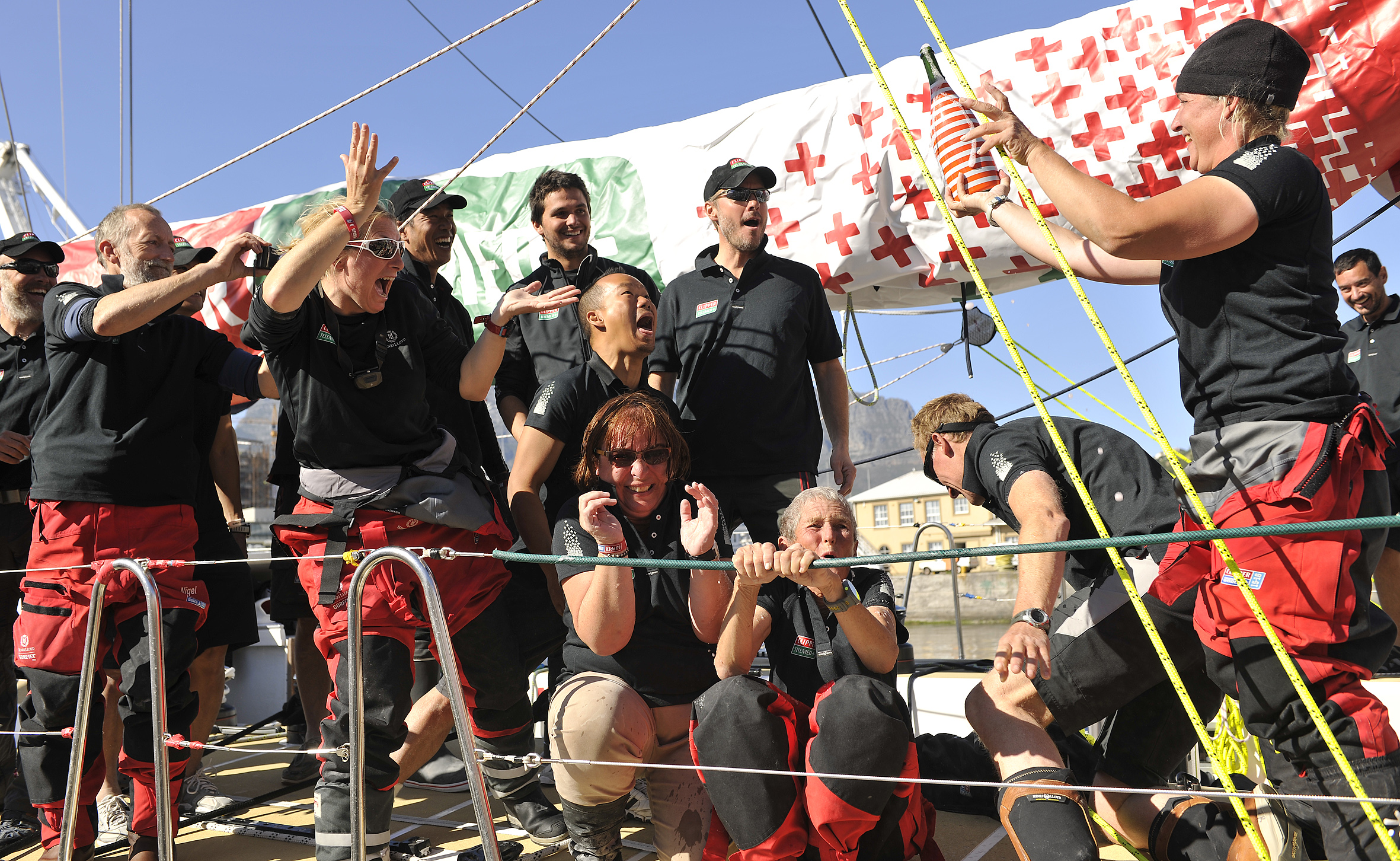 Arriving into the V&A Waterfront marina ClipperTelemed+ Skipper Diane Reid says: "This race was much tougher, wetter and colder than the previous race, it was very challenging but exhilarating! I am thoroughly enjoying the race I simply cannot put it into words. During the race we didn’t encounter much of the high system the other teams did, we managed to keep it a fast race and at the closing stages we experienced 45 knots gusting over 50 with three reefs in the sail. I am very proud of the crew and the performance they put in.

"I’m also really pleased to be in Cape Town, I have always dreamed of coming to Africa, I’ve only ever seen it on TV before so to sail into Cape Town in front of Table Mountain Is a dream come true."

Ryan Finlay a 49 year-old Canadian who is taking part in the full circumnavigation on board ClipperTelemed+ says: "The crazy moments are the ones everyone relishes and the first couple of days into the race were pretty insane with people suffering from seasickness and carrying out sail repairs. I’m tired but very happy to be here. Our objective was to be within 24 hours of the first boat because of the issues we had in the early days of racing we knew we properly wouldn’t be able to come in first and second. We’ve beaten that so we are very excited, we don’t know our overall race position yet but we’ll wait and see. Fingers crossed that we could come in third.

"As a team we are fabulous, we noticed that by the second week we were getting on with things without any direction which was really cool. As a crew we did a great job. The highlight of the race for me was spending more time at the bow than I ever have before in my life and pulling down the Yankee in 45 – 50 knot winds, it was the hardest thing I have ever done but I loved it! I used to live in South Africa and came to Cape Town quite often but that was 15 years ago and I’m amazed at how much it has changed, it’s excellent. I have never sailed into Cape Town, when we were coming in Table Mountain was black because the sun was coming up behind it but as the sun started to come up it filled in and looked spectacular, I really enjoyed that." 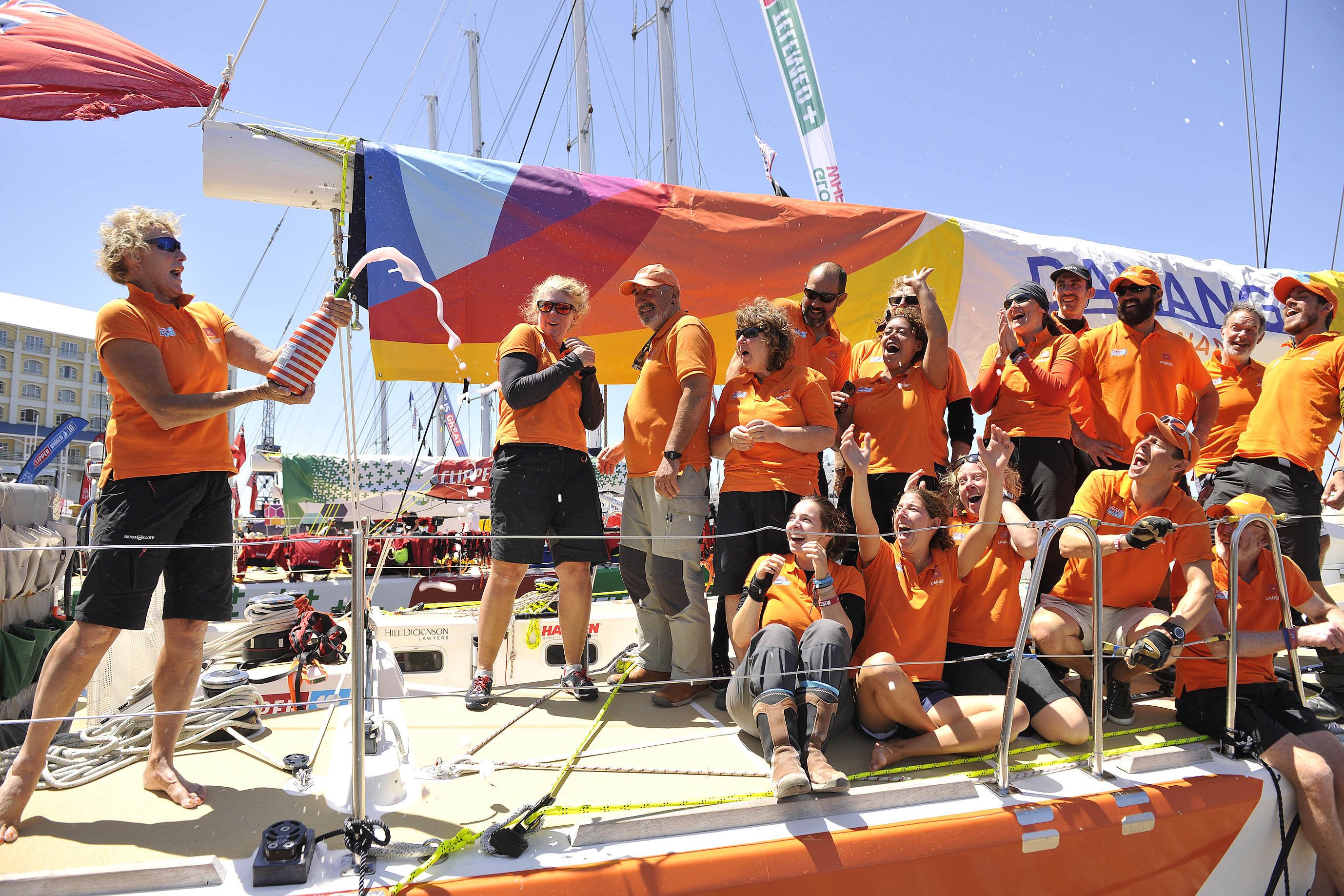 Da Nang - Viet Nam Skipper Wendy Tuck reports: "It’s really nice to be here. It was a bit of an anti-climax as we had so much breeze last night and then finished in hardly any, but it wasn’t an anti-climax because it was a duel to the finish line with IchorCoal which was so exciting.

"It’s hard racing out at sea waiting with baited breath for the six hourly reports to see where your competitors are, and to see if you have gained or lost, so it’s very tense. The start was the first time we had sailed in really heavy winds upwind and we decided to go for the Scoring Gate which was pretty much upwind all the way. We figured by the time the weather changed we were halfway there so we thought we would go for it and it was good practice for the Rolex Sydney Hobart Race because nobody had done it before. We then had really heavy downwind stuff that we didn’t experience in the last race which was a great learning curve for the crew.

"The crew morale on board is fabulous. Towards the end when we could see IchorCoal in front of us we knew we had to get them. I was in the nav station when I got the call from deck that they had stopped and parked in a wind hole. We went from having two reefs in a number three headsail and getting gusts of up to 38 knots to 16 knots and then nothing. It was quite extraordinary on how it closed up so quickly."

Da Nang - Viet Nam round the world crew member Lara Sword says: "I feel amazing, but I have mixed emotions. I want to burst into tears and I’m not sure if it’s because I am tired or just really, really happy.

"We pushed ourselves quite hard, everybody did. This race we were very focused and I think we did really well. We made the Ocean Sprint and the Scoring Gate which we didn’t get to last race so that was very good. It’s a shame ClipperTelemed+ pipped us to the post, we saw it last night and were chasing it down but didn’t quite make it.

"I didn’t expect this race to be so challenging. It was very rough but that’s what sailing is all about. At one point I was stood at the bow whilst we were surfing along and just had to scream ‘this is so amazing!’ I loved that it was so cool. That was a definitely ‘this is why I’m here’ moment.

"I am looking forward to exploring Cape Town. Lots of the other teams who had arrived overnight came out to greet us and we have had such an amazing welcome."

PSP Logistics crossed the finish line at 1716UTC (1916 local) and arrived into the V&A Waterfront around 2000 local time where the crew was greeted by family and friends. The team had an eventful start to the leg when the yacht sustained some damage early on, but despite taking the decision to return to Rio for repairs, it is the eighth team across the line. PSP Logistics Skipper Max Stunell says: “That was intense. We were down to a skeleton crew to start off with because we had a couple of people who got injured before we set sail from London and then a couple of others swapped legs, but we adopted three new team mates from another boat and the whole team has done a magnificent job getting us here.

“At the beginning of the race we went out into some very heavy seas. We had some rig damage so we turned back to Rio and then had to go back out and do it all over again. There was a little bit of seasickness at the start but the crew all got on with it.

"We had a few nights where it was a bit windy and wavey, then the past two hundred or so miles we’ve had close to 50 knots of wind. The views on the way into Cape Town were spectacular.

“Morale was always high on board, we like to keep the mood light. I’ve never been to Cape Town before so have been looking forward to this stopover for a long time.”

Moussa Tawil, the first Lebanese crew member in Clipper Race history, is sailing round the world on PSP Logistics. Recounting the second leg of his global adventure, Moussa says: “It was only a two week crossing but we got much more weather than in Leg 1. We got wind, we got no wind. We got strong wind, wind coming everywhere. We got strong seas and calm seas, sun, clouds, everything packed into two weeks. It was amazing and feels so good to finally be here.

“We were surprised in the last three days with strong head winds so we were beating all the time. I haven’t seen the boat crashing into waves like that before, that was a first.

“Another highlight was definitely seeing land for the first time. Initially from afar we weren’t sure and thought it might just have been a cloud, but it was land. That was the best feeling ever.”

The Stormhoek Race to the Cape of Storms is set for an exciting finish, with frustrating winds and the wide…