There have been many stories of inspirational women on the Clipper 2017-18 Race so far and on today, International Women’s Day (IWD) 2018, it is the perfect time to pay homage to these amazing individuals who have come from all walks of life in order to take on one of the toughest endurance races on the planet.

IWD was established in the early 1900s and is a global day celebrating the social, economic, cultural and political achievements of women. This year’s theme is #PressforProgress, which the Clipper Race is fully supportive of. When it comes to sailing, which has traditionally been seen as a male-dominated sport, the Clipper Race has bucked the trend with around a third of the crew being females of all ages and nationalities.

206 of our intrepid ocean racers are female ranging from the age of 18, up to 71 years old. Jemma Cowley was aiming to be the oldest female circumnavigator on the Clipper 2017-18 Race before she was forced to retire through injury but she cannot wait to re-join again in Seattle, saying: “Being on the Clipper Race is one of the best things I have done in my very ‘short life’ of 66 years. Sexism and ageism haven’t been a problem for me thus making me feel very much part of the team.

“I had very little sailing experience, and none in the last 20 years, until I joined the Clipper Race and I feel very fortunate to be part of it.”

IMAGE: Jemma Cowley on board.

Jemma is originally from Trinidad and is one of many women that make up a vastly international crew with 17 different nations being represented, including Japan, India, Poland and for the first time, the Czech Republic.

Perhaps unsurprisingly, considering there are two Chinese entries in this edition, the largest contingent of female crew, outside of the UK, is from China. Many have been inspired by former Qingdao crew member, Vicky Song, who was heralded as a role model for women when she became the first Chinese woman to sail around the world in the Clipper 2013-14 Race.

She went on to be awarded as one of the most influential women of the year in 2014 by the organisation UN Women and has spoken to many young women about her experience to motivate them to be ambitious.

She says: “A lot of girls come to me and say ‘I didn’t think as a girl I could do that as well’, and I tell them they’re not any less strong than men. I think attitudes and respect to women is improving in China. So hopefully we can inspire more women to go out and share the bigger picture with the community.”

One such crew member who was inspired by Vicky Song was Hong Ma (Helen), 29 who is a secretary and translator from Qingdao. She says: “It’s a huge dream of mine to be able to follow what Vicky has done. She’s been a big inspiration to me and doing the race has been one of the greatest achievements in my life.

“The chance to meet and be part of a team with so many people, male and female, from all over the world is something so valuable. I would tell anyone thinking of it just to have no fear, go for it and try it for themselves.”

Also inspiring more women into sailing is Australian Skipper, Wendy Tuck, who is currently in pole position to become the first ever female Skipper to win the illustrious Clipper Race Trophy if her team, Sanya Serenity Coast, can remain on top of the overall race leaderboard when the circumnavigation is completed in July 2018. She says: “Having worked in a pretty male dominated industry for over a decade, I think the most important thing for me has been to act like I’m just another person doing this job. If there have been barriers, I just ignore them and get on with it.”

Incredibly, this is her second circumnavigation as a Clipper Race Skipper where she already started to inspire a new generation. Wendy adds: “One of the coolest things that happened last race, was when a friend’s daughter was asked at school if she could be anyone for a day who would she be, she said me.” 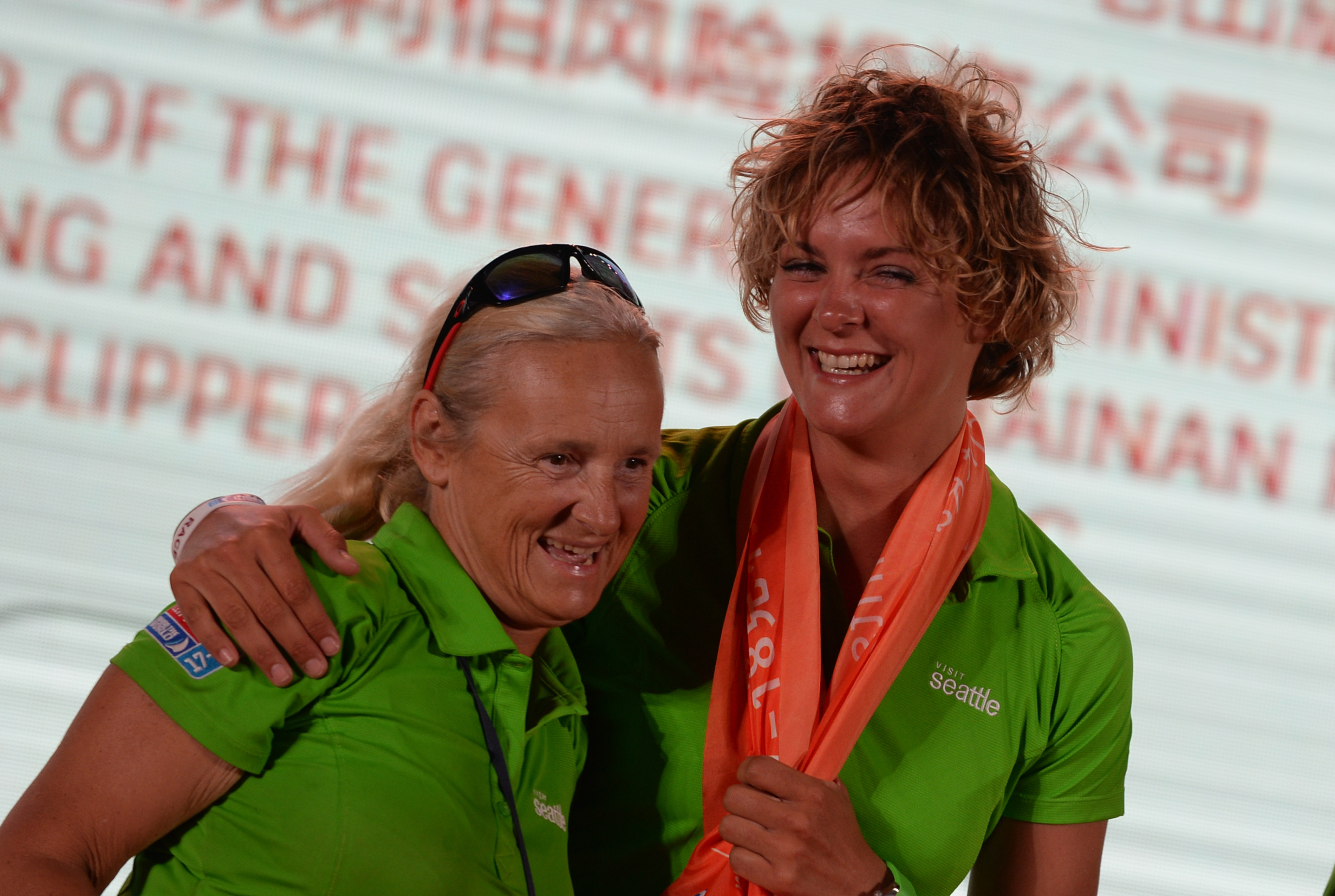 She added: “I’ve done a lot of work with all-female teams. There’s definitely not enough women in the industry and I think that things like the Clipper Race help to get more women into the sport. If I can be an advocate for getting more women in to sailing, then that’s absolutely great.”

VIDEO: Throwback to the first time that a stage of the Clipper Race resulted in a female Skipper one-two finish (Race 4).

During Leg 4, Nikki’s crew consisted of the highest ratio of female to males and culminated in a victory in Race 6, from Airlie Beach to the Whitsundays. During the Leg, along with members of her team, she was able to inspire further women into sailing during the Sydney stopover.

One of her female circumnavigators is Shannon Dean, who is from the team’s home port of Seattle. After growing up on boats, she took the chance to pursue her dream of sailing around the world.

“I hadn’t done much sailing for the last 20 years,” says Shannon. “My kids have now grown up and I got a bit bored so I changed careers and went to nursing school. One night I was doing an internship and, while in a hospital with the babies sleeping in the Labour and Delivery Unit, I was watching the TV - I saw the Clipper Race fleet leaving for the last race and I signed up myself the next morning!” 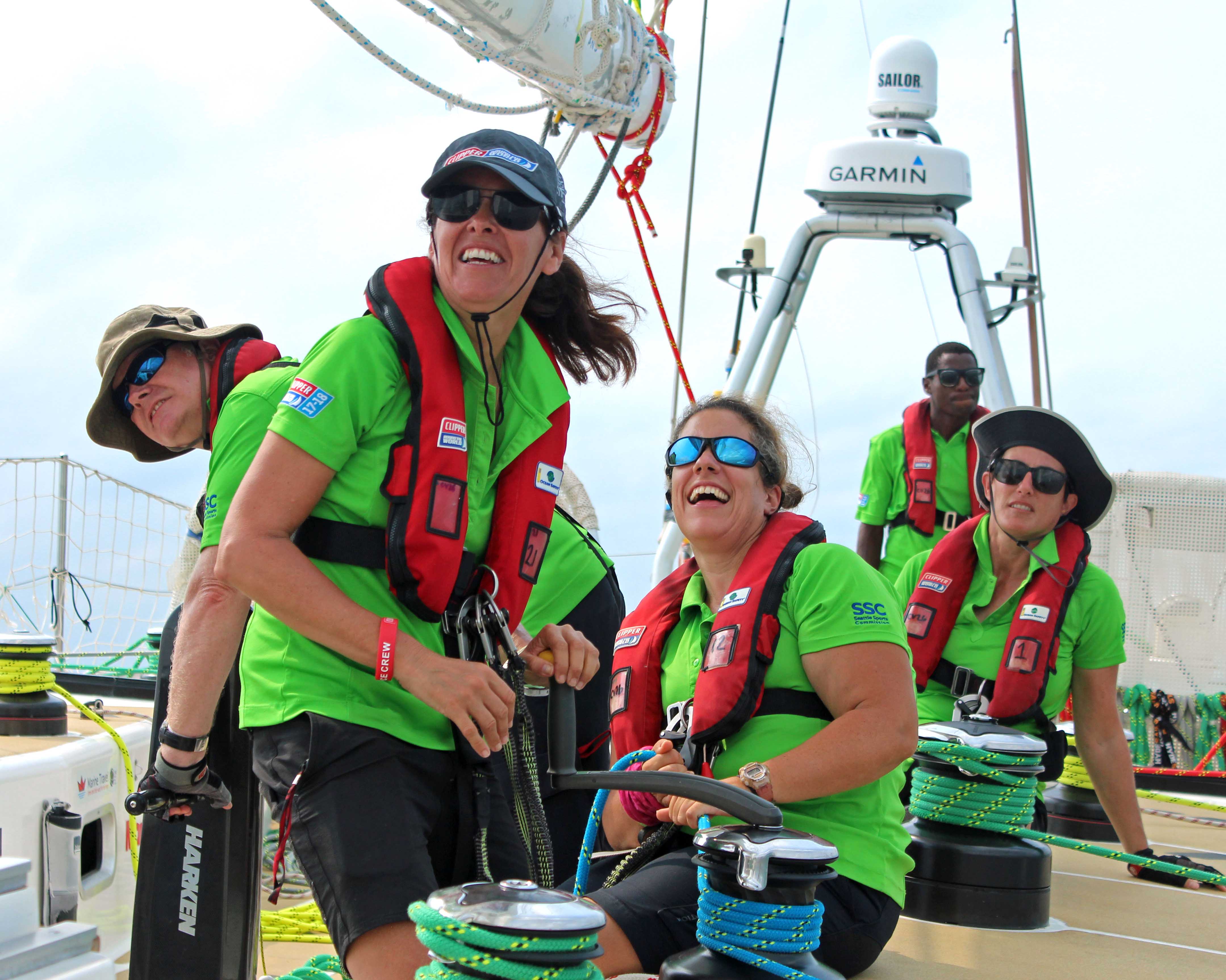 IMAGE: Shannon Dean (standing) on the winch while on board Visit Seattle.

The Clipper Race continues with the aim of improving gender parity in the sport of sailing and to boost the number of women taking part in the Clipper 2019-20 Race. The gender split for applications received so far for the next edition is around 30% female so if you have been inspired by what you have read so far, either to be a Skipper or crew member in the next edition of one of the worlds’ toughest challenges, apply now and truly press for progress.