#ChangingTack is a series on how ocean sailing and time spent at sea in the most raw and wild environments changes us, and can inspire a life or career change.

Jilly’s story is an inspirational one that has taken her on a journey which changed like the winds she went on to battle in the Clipper 2015-16 Race. Without any previous sailing experience under her belt, Jilly went from working as a musician in Northern Ireland to take on the longest leg of the Clipper Race. Fast forward to today, and she is helping others achieve their dreams as Race Crew Recruitment Coordinator for the company she now describes as family. 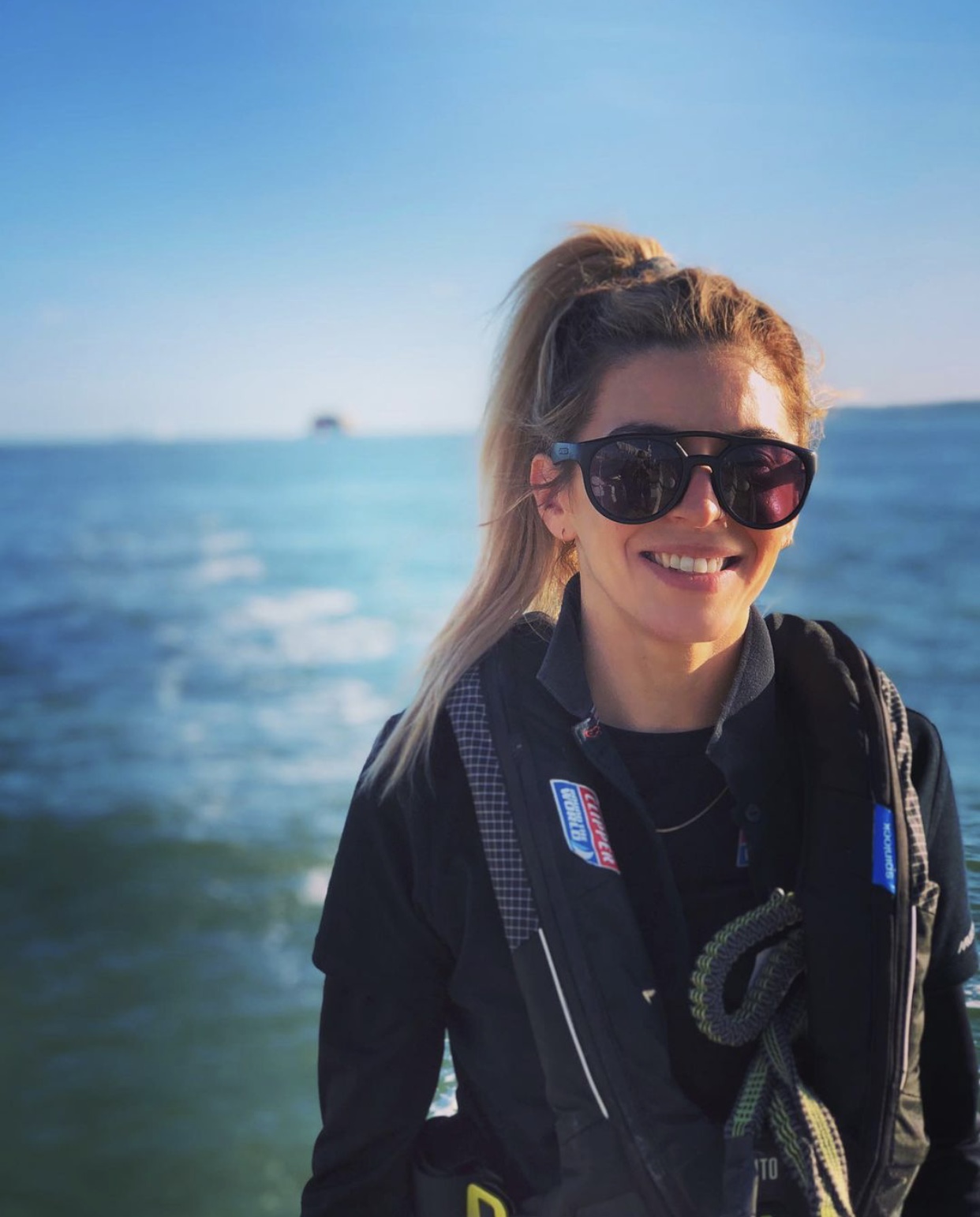 Setting the scene, she says: “I am from Northern Ireland, born on the north coast. I lived in Derry~Londonderry for about twelve years, so when people ask I say I’m from Derry~Londonderry. Before I joined the Clipper Race, I was a full-time musician in a rock band. We were touring and things were going well, and then I found sailing. I had no sailing experience before the race.

“There was an interim between my music career and joining the race where I was pretty ill with mental health issues and hadn’t been working for about a year. I came across the Clipper Race during my recovery when the fleet was docked in Derry~Londonderry during the 2013-14 Race. I stepped on board a yacht to have a look around and was chatting to one of the Race Crew, and within about 15 minutes I decided that I wanted to do this.”

Derry~Londonderry has a strong Clipper Race legacy, with the ten year anniversary of the partnership being celebrated recently. Whilst the yachts were in the city for a stopover, Jilly found herself in the perfect place to discover the race. She explains: “Whilst in recovery, Derry City Council, who were the Host Port and Team Partner with the Derry~Londonderry~Doire yacht were looking for bursary recipients under the campaign ‘Your Next Chapter’ and I applied and I got a spot - that’s when the sailing passion took over!”

When asked how it felt to receive the call after her application, Jilly tells us: “I was in Scotland at the time so I had to wait a few days to get home to read my letter which invited me to The Guildhall for a meeting. At that point I really wanted it - it was within reach and I was fighting fit, feeling strong and ready to do it! We were all called in and we were told we were going to do the four training levels and a leg of the race before being handed our red jackets. I was over the moon! I was apprehensive and excited but very keen to get out of my comfort zone.”

On what drew her to the race, Jilly enthuses: “I’ve always been drawn to the ocean - I consider myself a bit of a hippy. I grew up on the north coast of Northern Ireland and the Atlantic is right there - to get out and explore on a yacht was super appealing to me. It was calling me! Anyone that has done the Clipper Race will know the feeling - it speaks to you and I was so ready to go out in the world and live!”

Recounting her training experience, Jilly says: “As soon as I stepped on board on my Level 1 I felt comfortable. The Skippers had such confidence in what they were doing so I felt really comfortable with them. I had a novice point of view where I wanted to soak up everything with safety as priority. I couldn’t believe I was there. I remember on a night sail, I was looking at the moon and I had a tear rolling down at the thought of simply being there - I was really happy. I knew at that point that I wanted to be a part of the company, working for the race or as a future skipper.”

“The Clipper Race is definitely about getting past barriers and realising we are all on a level playing field. On my Level 4 I woke up with one boot off and one on in my foulies - I was so exhausted but the sense of achievement was constant.” 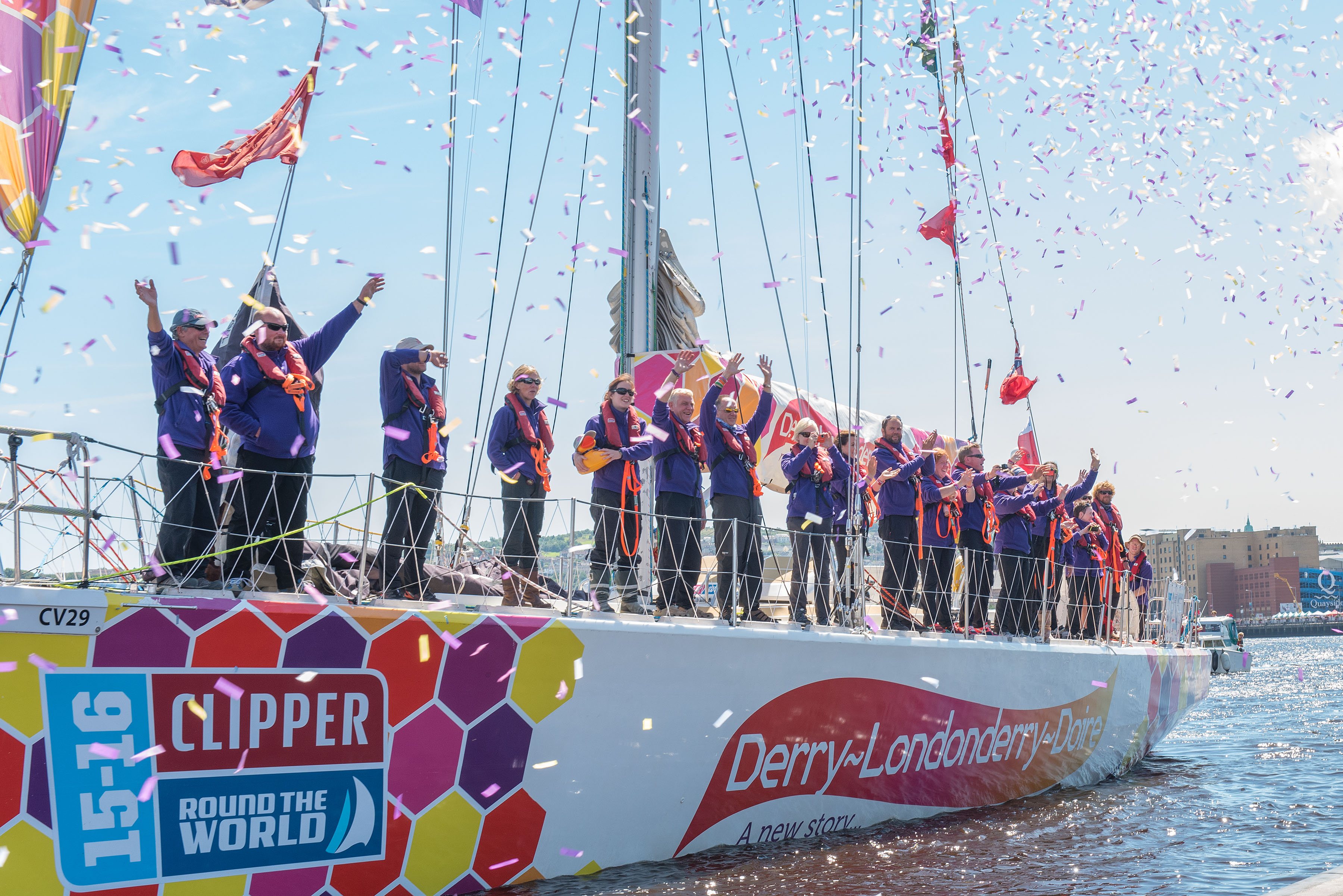 Jilly joined the 2015-16 edition for Leg 7 which saw her sail from Seattle via Panama to New York, experiencing transiting the Panama Canal - a bucket list event for many sailors. This highly tactical leg brings challenges from every point of the compass, as Jilly echoes: “In terms of conditions we had them all! At first it was similar to training in the Solent and then the wind died off, and the heat was so intense. We had lots of technical elements. I talked about the heat a lot and the crew realised when they sailed into Derry~Londonderry, the climate that I’m used to! I circled the mast to get shade at one point.

“Stand out moments are the big weather experiences - we had squalls by Costa Rica and we had incredible lightning. It was amazing to be in the thick of it. We also had a hurricane on the Atlantic side - it was physically challenging but exhilarating. I have fond memories and I’m hooked on it, but I was crying at the time, trying to get into my bunk. It’s just incredible to experience these things that few people get to witness in remote areas.” 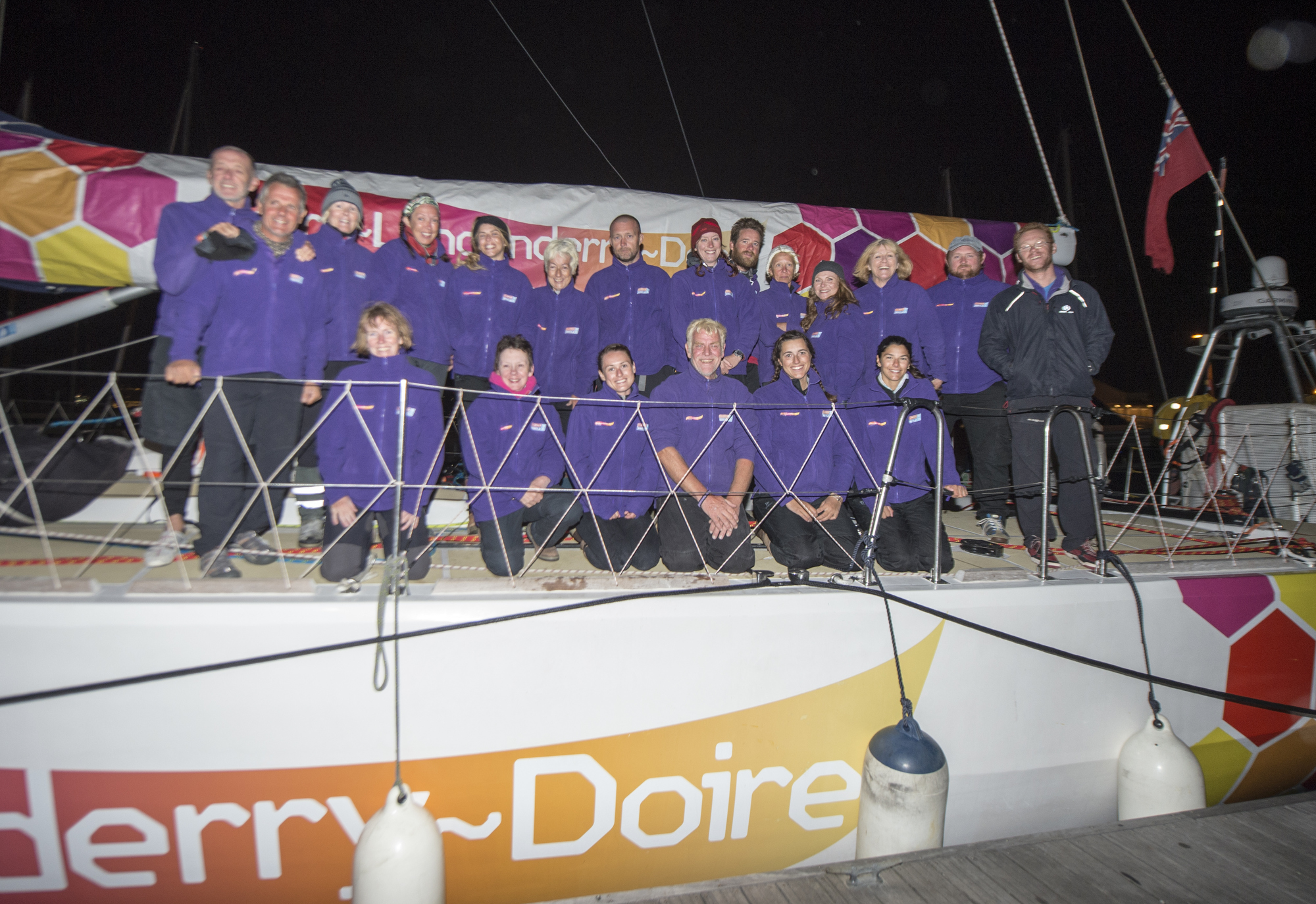 Image: Jilly (back row, five in) and her teammates

And what is it that gives Jilly a buzz? She tells us: “I love experiencing new cultures and meeting new people. Everywhere you go there are lovely people, then challenging people, good areas and bad, but I just loved being on the water. The crew became family and I loved feeling part of something. I felt like the community aspect is similar to touring with the band - sharing a van with smelly men in their 20s put me in good stead for the race!”

Having settled into life at an angle, Jilly found herself at a crossroads. After meeting her team again in Derry~Londonderry she waved them off to London, recalling: “I was so gutted it was over. Not only my team that I sailed with but the whole fleet and the race team - I felt like ‘what do I do now?’

“I was offered a few opportunities and crowdfunded for my flights to the U.S and started working on superyachts as a deckhand and assistant engineer - doing deliveries between Savannah, Georgia, Fort Lauderdale. I loved it. I was covered in bruises and paint but I didn’t care - it was amazing working with my hands and getting the chance to travel. I dreamt of one day going to The Bahamas and I achieved that.” 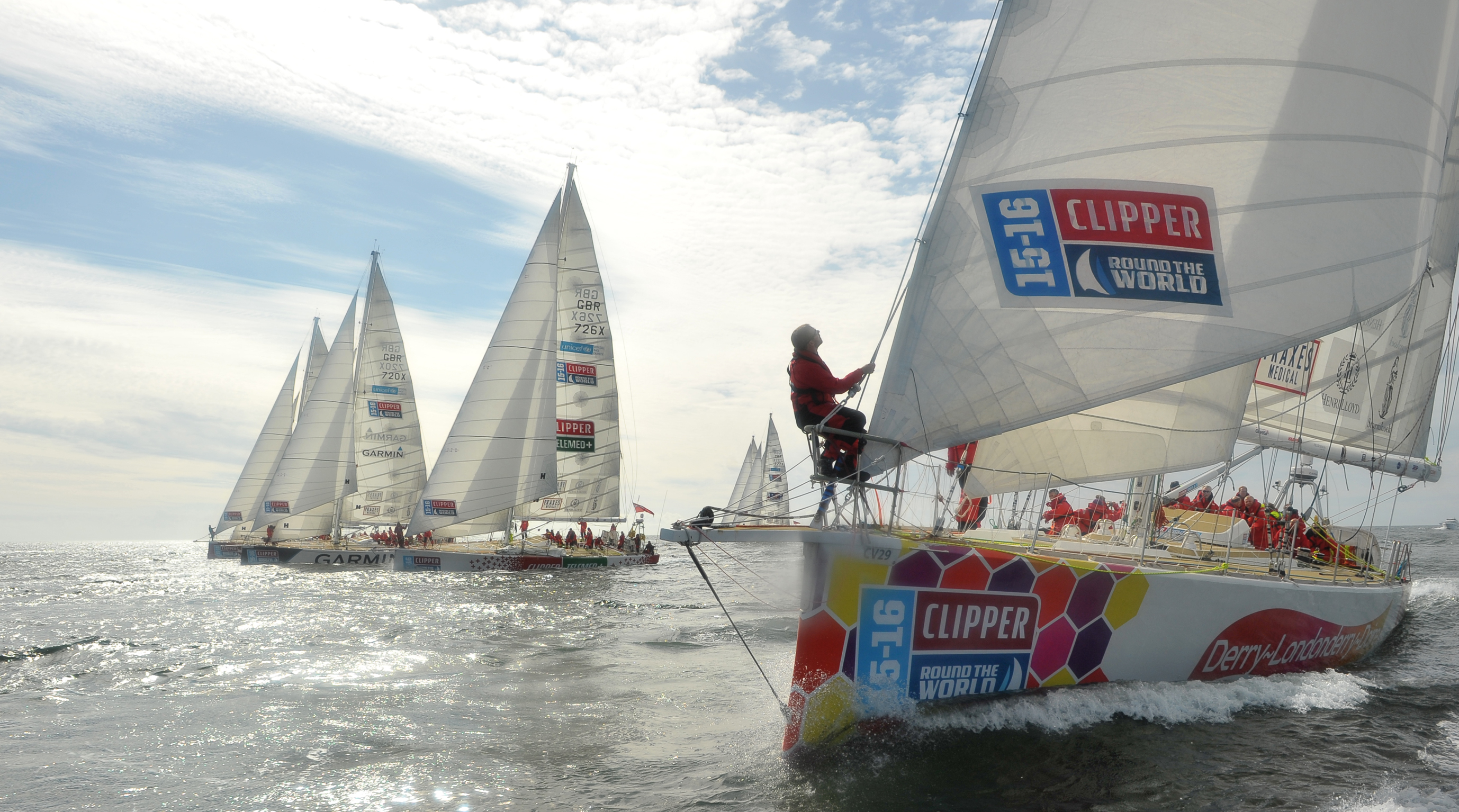 Image: the city's team yacht lines up against the fleet in 2016

She explains what was next for her, which has led to her role today: “I was in Derry~Londonderry for the 2017-18 race edition stopover, and I was in the dome, as alumni, sharing my story. I was told about a role opening within the Clipper Race - I was told it described me to a tee. I was interviewed there and then, and I got the job and moved over to the UK ten days later.”

When asked how she feels in her role today, she exclaims: “I love the team - they are family. I’m considered part of the sales team, but I'm not selling - I simply share my experience and how it changed everything for me and pass the baton on. There are crew who I chat to who are not sure they can go through it and by Level 4 they are standing taller thanking me for pushing them to do it. I’ve had postcards from The Whitsundays saying thank you.

“Recently I have been getting out on the water more and experiencing the role of a Second Mate. When needed, I was sent on a sea trial and since then I have done some corporate events and training. Working with lots of men, I go on board and they are often surprised this small woman is sweating the main up. The Corporate Days with Clipper Events are great. I am introducing people to sailing - people come on board so nervous and by the afternoon they are sailing the boat. It’s great for team building. I’d love to do more of it.”

Changing direction in life isn’t always easy but Jilly’s story is evidence that it can lead to amazing experiences. Giving it some thought, Jilly suggests: “I think if something is meant for you, it will happen. If you want something enough and you are good at it, you will get it. Save, fundraise and people will want to support you - just don’t stop.”

And finally, what’s the next ‘next chapter’ for Jilly? She says: “At some point, I will circumnavigate the world, whether with the Clipper Race or off my own back with friends and family. It’s good to plan but life has a way of sending you curveballs. Who knows where I’ll end up?”

If you are inspired by Jilly’s story and want to sign up to experience the Clipper Race, click below for more information. If you are in search of a rewarding career in sailing, and are looking for a change of direction, why not apply to be part of the world’s greatest ocean adventure in a professional role, or take a look at our other varied career opportunities?