When the Clipper 2017-18 Round the World Yacht Race departs Seattle for the penultimate leg of its 40,000 nm circumnavigation of the planet, it will be engaging in pioneering scientific research. One of the team yachts, Visit Seattle, has been fitted with a special sensor, for monitoring the effects of ocean acidification around the US Coast.

The Clipper Race is working with the Port of Seattle, National Oceanic and Atmospheric Administration (NOAA) - an agency within the US Department of Commerce – as well as the University of Washington, Sunburst Sensors and Visit Seattle to raise public awareness of its Ocean Acidification Program, which studies changes in ocean chemistry in response to increasing carbon dioxide (CO2) in the atmosphere, associated with climate change.

Clipper Race Chairman, Sir Robin Knox-Johnston, the first man to sail solo, non-stop around the world almost 50 years ago, said: “This collaboration presents a unique opportunity for all involved to use a sport we love to research a subject we all care deeply about, our oceans.” 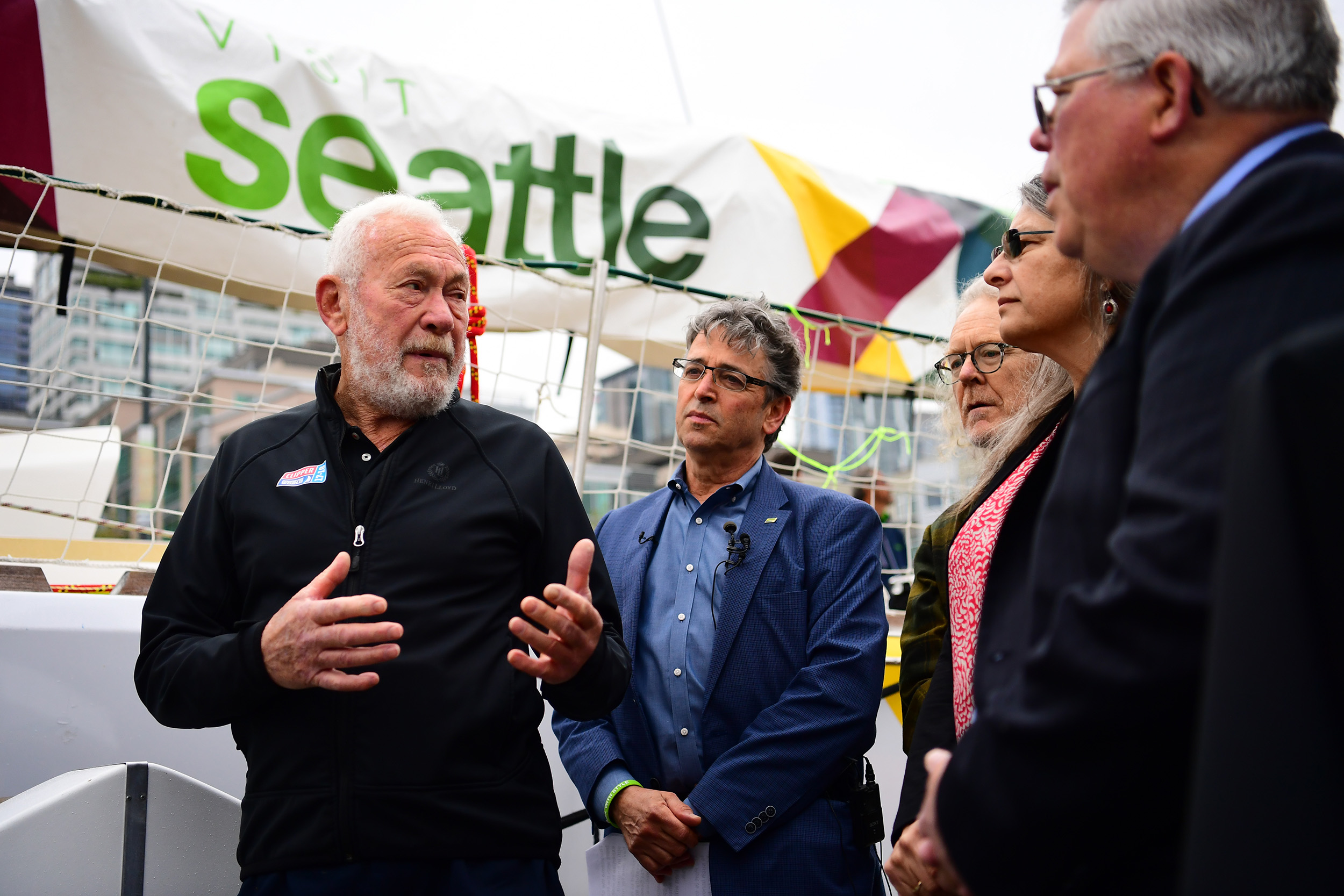 IMAGE: Sir Robin with organisers and participants of the Ocean Acidification Program.

Visit Seattle, one of the Clipper Race’s eleven identical 70 foot ocean racing yachts, has been fitted with a Sunburst sensor, the recent winner of a $2 million XPRIZE ocean health award. The sensor will monitor ocean acidification during the 6,000nm US Coast to Coast leg of the race.

Port of Seattle Commissioner, Fred Felleman, has spoken about the importance of monitoring the waters around the North American coast, saying: “Pacific Northwest waters are particularly vulnerable to ocean acidification - impacting numerous species of ecological and economic importance, from plankton to pollock, oysters to orcas.” IMAGE: The Visit Seattle yacht and team in its host port of Seattle. ©Jean-Marcus

The race departs Seattle on 29 April and heads to New York via the Panama Canal. This route will fill a vital gap in the current Global Ocean Acidification Observing Network (GOA-ON) as it’s a route never before monitored by the NOAA.

Dr Richard Feely, Senior Scientist from NOAA, explains: “Ocean acidification is occurring because our ocean is absorbing carbon dioxide from the atmosphere, leading to lower pH in the surface and subsurface waters. This is causing fundamental change in the chemistry of the ocean from pole to pole. It poses a threat for the oceans and the marine organisms that live within it; from the smallest, single celled algae to the largest whales.”

Not only does ocean acidification endanger ocean and marine life, the wider affect is the interference of a global seafood ecosystem which provides the primary protein source for two billion people around the world, and is an industry which generates billions of dollars for businesses around the US Coast.

After completing the toughest stage of the Clipper 2017-18 Race so far, which included hurricane strength winds and Phenomenal sea states of over 14m in height, each of the teams came together this evening, Sunday 22 April, to celebrate their achievements.Seattle and seafood go hand…