Pin Image
Home / News / Countdown To Sydney Hobart Is On

With the start gun for the 73rd Rolex Sydney less than 72 hours away, the Clipper Race crew have been run through all the finer details of taking part in the iconic bluewater classic which begins on Boxing Day.

After welcoming the crew to the Cruising Yacht Club of Australia (CYCA), Clipper Race Director Mark Light updated the teams on the latest preparations for both Race 5, the Rolex Sydney Hobart Yacht Race, and Race 6 from Hobart to the Whitsundays.

With the crews facing a jam-packed itinerary for the next month, the Crew Briefing was just as comprehensive, covering departure procedures, parade of sails, race starts, sailing rules, race features and the weather conditions, and media.

The crew also got to be the first to watch the wrap up video of Race 4: The Clipper Telemed+ Tasman Test, and there was a round of applause when it was announced that the majority of the footage used was captured on board by crew using their Garmin VIRB Ultra 30’s.

But the main focus of the briefing was on the Rolex Sydney Hobart Yacht Race. This will be the biggest moment of the race so far for the fleet of eleven Clipper 70s, who line up with another 100+ on Sydney Harbour on 26 December. After setting off on the centre (No. 2) start line, the teams will have round two marks to clear Sydney Harbour and the Heads before turning right and heading south.

In good news for the Clipper70s, the weather forecast is still featuring favourable downwind conditions with north easterlies for the majority of the race. There will be no Scoring Gate or Elliot Brown Ocean Sprint in this race, and none of the teams can activate stealth mode due to Clipper Race rules prohibiting Stealth Mode being used in either the first 24 hours of a race or in the final 250 nautical miles. 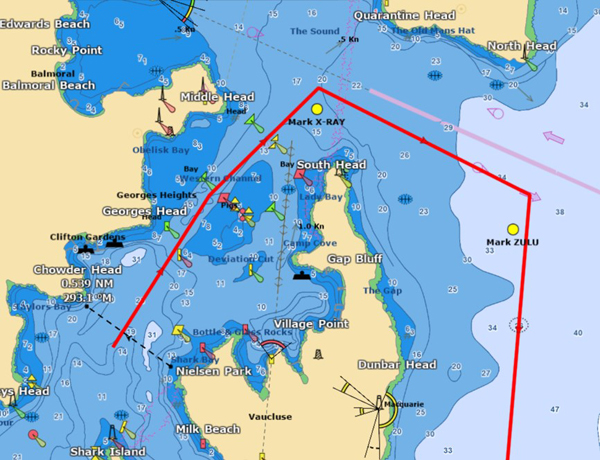 Despite much speculation over whether local Skipper Wendy Tuck would play Sanya Serenity Coast’s Joker Card during what will be her eleventh Rolex Sydney Hobart Yacht Race, no team has opted to play its card during this iconic race. But as declarations for Race 6 from Hobart to the Whitsundays won’t take place until the New Year, there is still an opportunity for one of the teams to double its race points in the final stage of The All-Australian Leg 4.

Race 6 will see the return of all the features for gaining bonus point those following from home love to keep track off, with the Scoring Gate, Elliot Brown Ocean Sprint back and teams can use Stealth Mode should they wish.

Airlie Beach in the Whitsundays will be the conclusion of an intense leg of racing and busy stopovers. Mark Light recognised how much extra work the crew had to put in to getting their yachts ready to take part in the upcoming race saying: “From me I really appreciate how much extra effort you have had to put in with your skippers and with us so thanks very much.”

Clipper Race Founder and Chairman Sir Robin Knox-Johnston closed the briefing by emphasising how important safety continues to be, and also provided an update on the latest of the regular meetings that takes place between the Safety Committees of each team and race officials.

“Safety has always been our number one priority and it is important that we have regular feedback sessions with our crew,” says Sir Robin.

“Hearing first-hand from those on board helps us to improve even further upon our very high safety standards.”

At the previous stopover in Fremantle, Clipper Ventures replaced all of the safety tethers in the fleet as a precautionary measure whilst assessing the performance of a tether that had failed on Race 3, resulting in the tragic loss of crew member Simon Speirs. Following further testing of the original tether, which is top-of-the-range, the Clipper Race and the Safety Committee of each boat unanimously agreed to return to using it subject to additional measures being put in place.

Sir Robin explains: “Our own investigations have established that the cause of the failure was a very unusual tether clip angle, owing to the clip being pulled sideways against a hard object. This resulted in the clip failing at well below its straight test strength and measures have been taken to eliminate this risk ahead of the next race so that the original tethers can be re-issued, which was the unanimous preference of the teams’ Safety Committees.

“While the MAIB and MCA investigations are continuing into the tragic incident on Race 3, we will stop at nothing to improve on our safety measures wherever possible by assessing the feedback from our Safety Committees on board.”

After the in-depth crew brief, the teams returned to their boats for team briefings with their Skippers to plan their race strategies ahead of a well-deserved Christmas break. Get ready to follow the action from Boxing Day on the Clipper Race Viewer!