Sinead (pictured in main image being greeted by the Mayor of Derry in New York), like thousands of others, watched with intrigue when the Clipper Race and its courageous crew arrived into Derry Londonderry for the first time in 2012. Four years later the Clipper Race is back and so is Sinead, but this time she was one of those courageous crew being cheered into port by the crowds.

Sinead explains what it's been like and how her experience has changed her.

Q. Why did you decide to take part in the Clipper Race?
A: I’d seen the yachts arrive into Derry a couple of years ago and something about it made me want to get involved but I thought I wouldn’t have enough experience of the finances to do it. But I saved and signed up for the training, and now here I am. Four or five years ago I would never have through I’d be able to do this. I looked at the crew that sailed into Derry the last time with complete admiration for the challenge they had taken on. So I feel very proud that I’ve joined them on the challenge.

Q: You did the boat delivery from Gosport to London ahead of the Race Start and I remember you talking then about how much you were looking forward to sailing home, even though it was almost a year away. Was it how you imagined?

A: Initially it felt surreal. People kept asking me how I felt and I couldn’t find the words to actually describe it. At Stroove, as we came down the Foyle River some family members of Kieran Lynch and Sharon O’Donnell, a couple of our crew who also live locally, met us on the water and passed over some bacon sandwiches. I’ve never tasted anything so nice in my life.

Someone else from another boat passed us over a bottle of champagne - it felt like we were celebrities. All the way up the Foyle, everyone was waving and that was way before we even got to Derry. Culmore Point is where I live and I knew loads of people there and they were all out waving at us. I had all this emotion but it was sort of caught in my throat and it was like I was just watching everything happen and just trying to absorb every second. It is still hard to put into words. 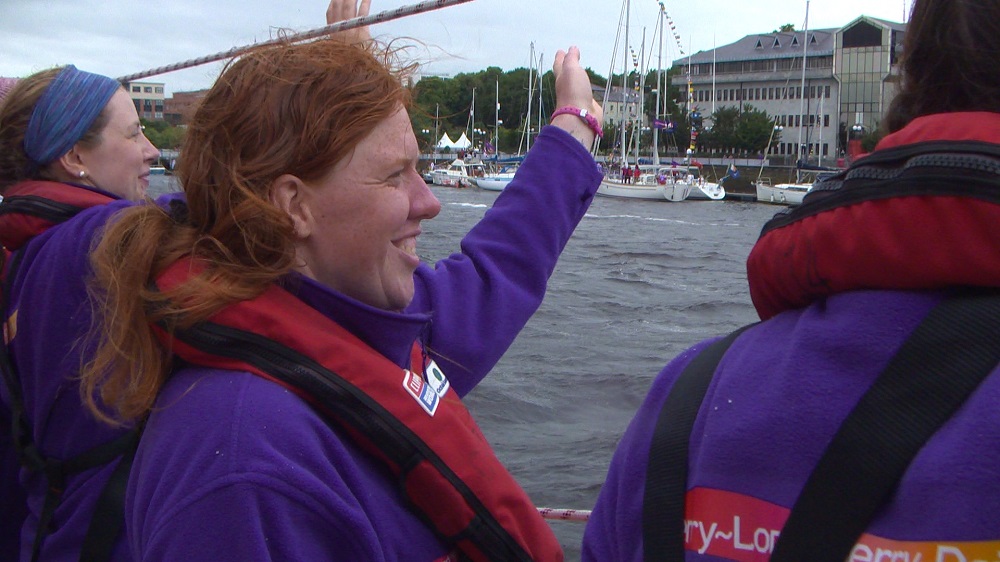 Children were reaching out to touch us when we walked off the pontoon in Derry, the Mayor was there to meet us, and we got mobbed like celebrities. My Mum and Dad were the first people I saw which was fantastic. It was so good to see them. Once we got into the tent I think I was in a state of shock, I just couldn’t believe what we had done.

Q: You’ve done a few TV and newspaper interviews since you’ve arrived home, do you find people recognise you?
A: All the time! I can’t go into Sainsbury’s or walk in town without meeting somebody who says congratulations. I see people I haven’t seen since school and strangers as well who say they saw me on TV.

Initially I felt a little put on the spot but after a while now I feel really proud and I’m learning to enjoy it. More for myself, it is a real sense of achievement.

Q: Has the Clipper Race experience changed you in any way?
A: It really has. Ultimately I feel like a different person since I signed up and had my interview. I’ve found me again. Five years ago I was at my lowest point. I lacked confidence and I didn’t believe in myself. Now I feel like I can do anything.

Being in this team environment has helped me hugely. I know my Skipper and my crew have trust in me or I wouldn’t be here. Also to be able to chat among complete strangers has been great. When I joined the boat in New York there were many people I hadn’t met so I learnt quickly to put myself out. We’re a big family now and I feel like I have no problems at all in talking to anyone I don’t know, whereas before I would have felt too shy I think. It’s been huge for me. 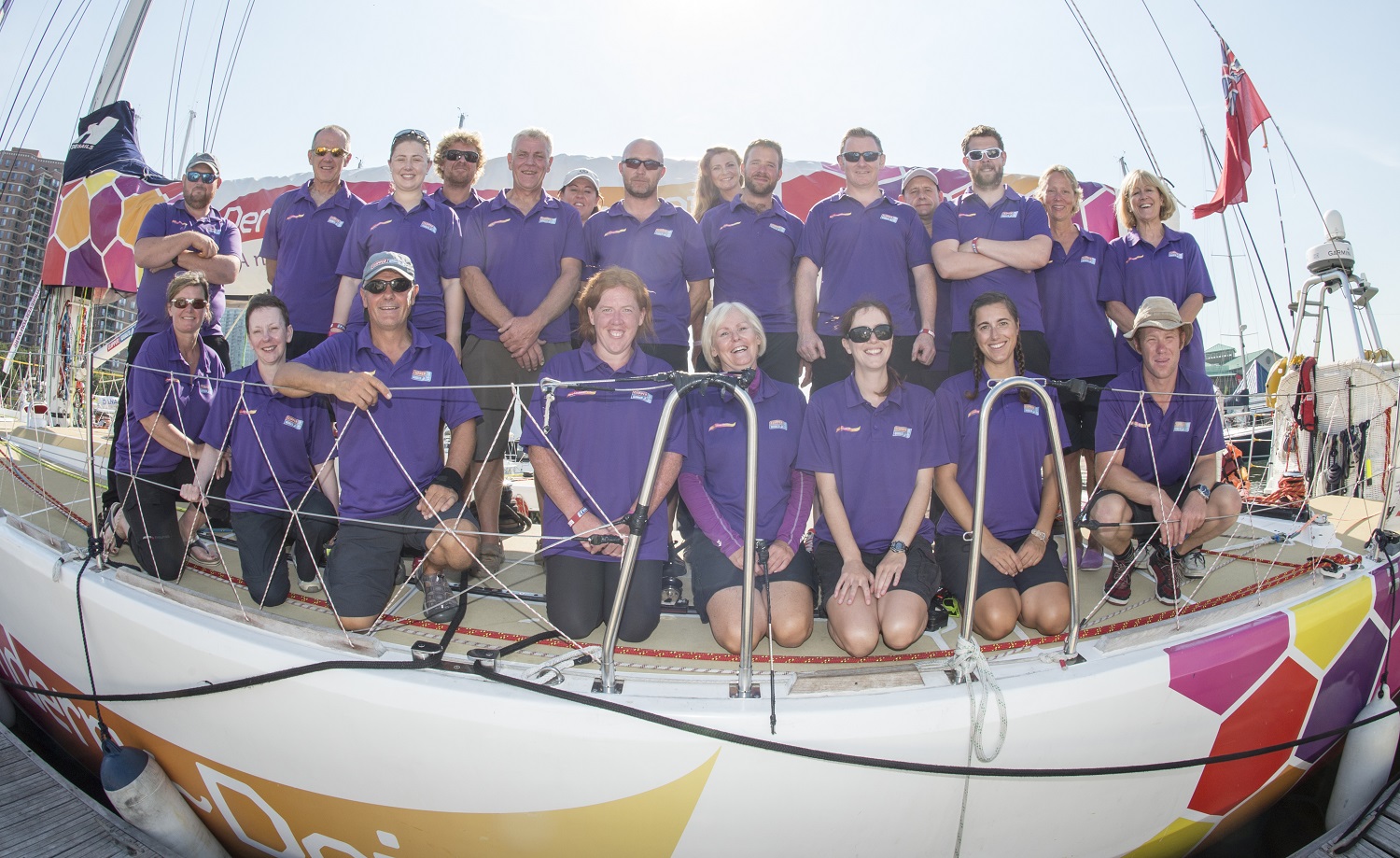 Q: You hadn’t sailed before you started the race, but do you think you will keep it up now?
A: I’d love to continue sailing, at any opportunity. There is a place down at Fahan in Donegal so I will be looking into that, I think it is the Lough Swilly Sailing Club. People have told me about it before but now I have done the race I definitely feel I want to continue.

I would also really like to return and do a leg of the next race, the Pacific Leg I think, as I see it as the ultimate challenge. I was actually originally signed up to do it but I changed it so I could sail into Derry and I’m really glad to have done that now but I’m still keen to try the Pacific.

Q: Did you have any tough moments on the race?
A: On about Day 6 or 7 I had five minutes where I thought what am I doing here, feeling completely out of my depth and that is where your watch, who are really your family I suppose, sort of help shake you out of it. You don’t even need to say it really as they can sense when you are having a moment, but you have a sing-song and a laugh really and it just helps. That was the only time really that I felt completely out of my depth, but after that I just never looked back, and now I can’t wait to go again on Sunday 17.

Q: You’ve just arrived but how do you think it will feel to leave home behind again?
A: I can’t wait. That has always been one of the things that most drew me to this leg. Coming into Derry was always going to be brilliant but also the departure, whenever the boats leave is going to be amazing too. Just the whole celebration.

I know what it is like to be a normal resident here, looking at the boats and going ‘wow’. That was me six years ago when the Clipper Race first visited Derry. It is hard to put into words how it actually changes somebody but I am delighted to have had the opportunity.

If someone had told me six years ago that one day I would be one of those people that we all watched with admiration as they arrived in, I could not have believed it at all. I’ve enjoyed every single second, from Level one training and meeting staff, and getting to know the crew, to actually finally doing it. I couldn’t tell you one regret. Not one. I have the odd bruise and my fingers are sore, but that just proves as a reminder of what we’ve just done. Now for the final two races!

If you live locally and fancy trying the Clipper Race for yourself, free sailing sessions take place in Derry-Londonderry on 14 - 15 July from 0930-1230 and 1330-1630. Click here for more info and to register.

The City of Derry-Londonderry has an open invitation to the Race 12 LegenDerry Finale Prize Giving ceremony which takes place at Guildhall Square on Wednesday 13 July. Just turn up from 1800 and watch the team celebrations unfold.

The Clipper Race fleet will be based at the Foyle Marina until Sunday 17 July, forming the focal point of the 2016 Foyle Maritime Festival. Click here to see a list of events and activities taking place across the city in celebration or come down and check out the food stalls, entertainment and enjoy the colourful festival atmosphere.