The second leg of the Clipper Race circumnavigation, the South Atlantic crossing from South America to South Africa, is known for being an exhilarating and closely fought leg. Stormy conditions are to be expected, and when the fleet ducks south, the long rolling swells provide fantastic conditions for surfing down waves.

Featuring as the third race in the 2019-20 edition, the aptly named the Spinlock South Atlantic Showdown delivered what it promised when an intense standoff between the eleven identical teams played out along the entire 3,555 mile racecourse.

Following an incredibly hospitable stopover in Punta del Este, Uruguay, the fleet slipped lines from Yacht Club Punta del Este on the 23 October 2019 bound for the V&A Waterfront, Cape Town.Unicef was first off the blocks followed closely by Qingdao and the duo led the way until the fleet was out of sight.

Despite an early tactical north/south divide in the race, racing was extremely close and even saw Capetonian skippers Nick Leggatt, of Zhuhai, and David ‘Wavy’ Immelman, of GoToBermuda, spending a day match racing each other in the middle of the South Atlantic.

There continued to be no clear winner and the leaderboard fluctuated on a daily basis. The first points of the race were taken by Imagine your Korea, which crossed the Scoring Gate in first place, followed by Visit Sanya, China and Punta del Este.

By the second week of round the clock racing, the first true South Atlantic low pressure system moved across the path of the Clipper Race fleet, bringing all the things you would expect; wind, rain and big seas. And from then on conditions did not let up for the teams. “Man, this isn’t a wave, it’s a ski slope.” This observation, from Mark Edmonds on board Seattle, summed up the conditions as teams experienced up to 70 plus gusts of wind.

Helming was a white knuckle ride and boat speed records were notched up to the mid twenties. Skipper of GoToBermuda, David ‘Wavy’ Immelman said: "Well, we have had our days of Champagne sailing. Now we have our adrenalin sailing. It is soooo much fun. Screaming along surf, after surf. Of course, the top speed gauntlet has been passed from watch to watch, each time getting higher and higher. We hear the boat go roaring down a wave and cheers from the deck. The heads appear at the companionway where the speed inquiry comes, have they beaten our speed... and so each watch tries harder than the next.” 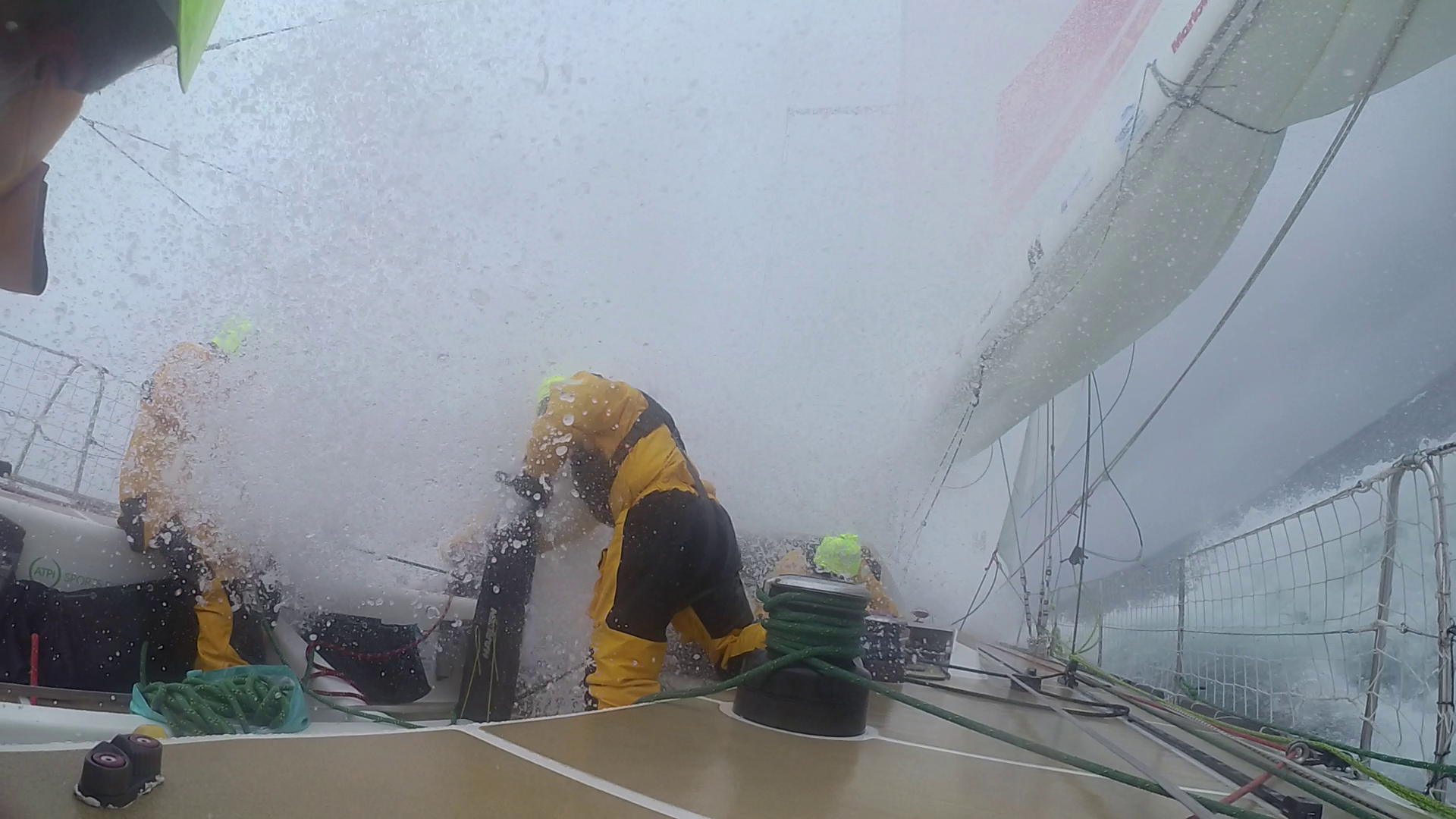 On the exhilarating conditions of Leg 2, Unicef circumnavigator John Dawson said: “Nothing compared to the stormy weather systems that have been most of our journey to Cape Town. Days on end of sitting on the high side of the yacht as it veered along at 45 degrees, using as much power as it could handle without going over. An extreme test of our skipper’s skill and experience of choosing the right sails for the wind strength and changing them at just the right time to remain safe yet optimise our progress against all the other competing boats, each trying to do exactly the same.

“For the crew, it’s a heady mix of intense hard work, long periods of being employed as inactive weight in winds of 40 knots with waves crashing over us in order to enable the boat to handle more power and the extreme exhilaration that comes with being on the edge.”

The final stages were dominated by navigating the difficult wind shifts and wind shadows in the final few hundred nautical miles into Cape Town and it was to be Qingdao that would go on to claim victory.

Crossing the finish line on Friday 8 November, beneath Cape Town’s iconic Table Mountain, after 16 days of racing, Chris Brooks, Skipper of Qingdao, said: “Two low pressure systems came together and I saw the perfect opportunity that proved to be the turning point of the race for us. It’s fantastic to win Race 3 and the welcome into Cape Town has been amazing.”

Arrivals into the Mother City spanned four days. The warmest of welcomes awaited the teams with supporters and locals lining the V&A Waterfront to cheer in the crew after their intrepid journey across the South Atlantic