The final two stages of Leg 5: The Asia-Pacific Leg, during the Clipper 2019-20 Race, were combined to form one longer race. This was a result of the global coronavirus outbreak impacting the scheduled stopovers in Sanya and Zhuhai and the race unfortunately not being able to visit the two cities in China.

Race 7: The Lakewood Hills, Zhuhai Race was named by the Zhuhai Organising Committee and the amended route saw the fleet race 1,600 nautical miles, starting and finishing in Subic Bay. One of the most tactical and closest fought races ensued. Over 10 days the fleet barely lost sight of each other.

The race got underway following a vibrant Parade of Sail in Subic Bay, with its mountainous landscape as the backdrop. The horn was sounded by a Race Crew Supporter who earned the right to start proceedings, following a charity auction for Unicef UK. Punta del Este was the first team to cross the starting line, closely followed by Visit Sanya, China with Ha Long Bay, Viet Nam in third position. With a downwind start, the fleet was in close quarters, all hoping to make the most out of each gust whilst in the Luzon Strait. 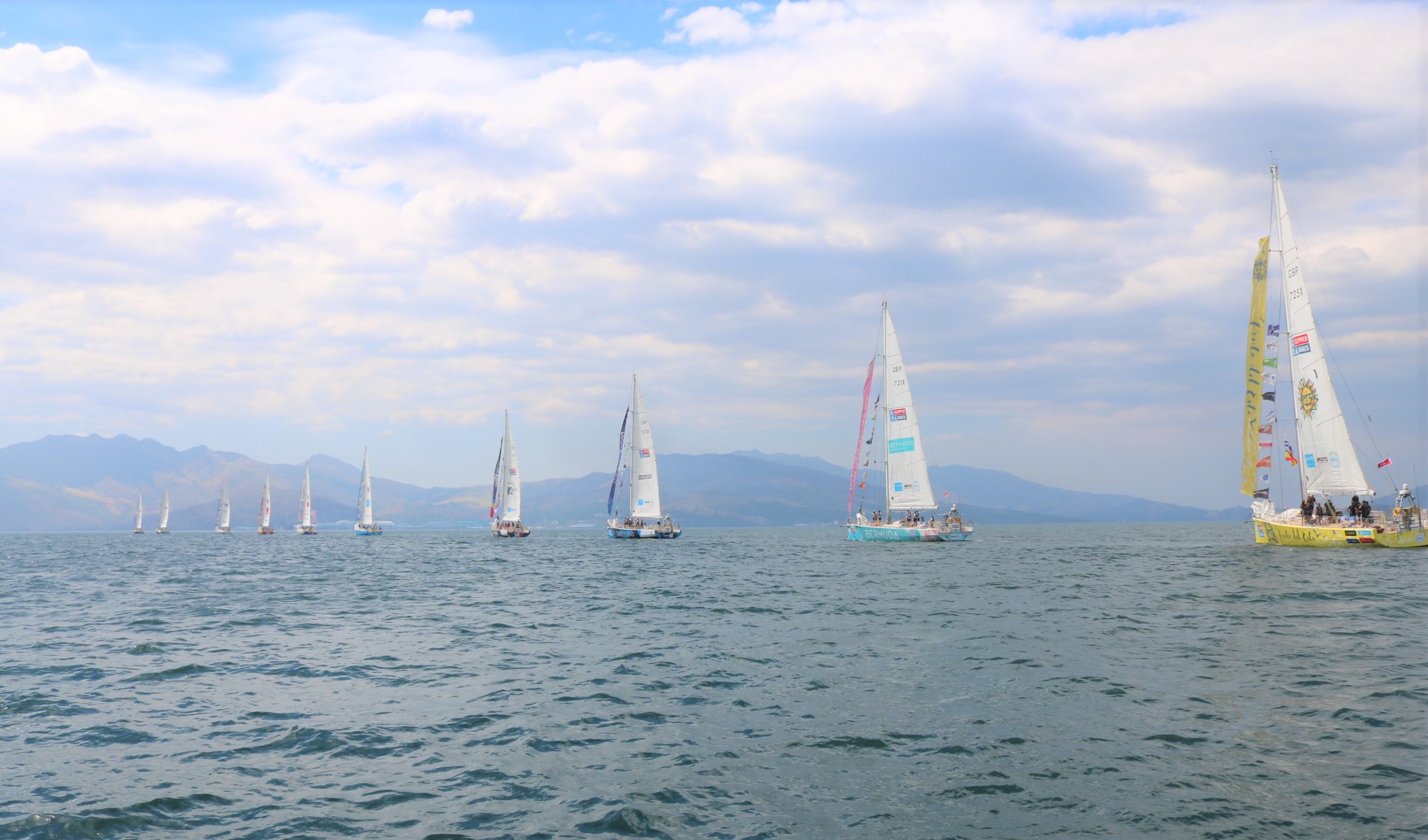 In the first few days, the tactics saw the fleet divided between the inshore or offshore route ahead of the first mark rounding. At the time, Unicef Skipper, Ian Wiggins, reported: “The last few days have been some of the closest and most interesting fleet racing since leaving London.”

The inshore route paid off as Qingdao, Punta del Este and Unicef led in the early stages.

After the light and downwind start, life on an angle soon returned. As the fleet cleared the shelter of the island of Luzon, the upwind conditions meant a tough beat northward. Strong winds and currents, as well as squalls meant conditions on board were relentless.

Ha Long Bay, Viet Nam crew member Diana Turkington described life on board: “The boat is heeled over properly now, which carries the expected gymnastic challenges, but we are also hitting the occasional wave head on, lifting the boat and suspending everyone/thing on it in mid-air for a second. You can’t see it coming. Just every minute or so we become suddenly weightless followed by having walls as floors again. So, although you take off from the floor, you may 'land' on the wall... sideways on. Fun for the first five minutes and after that it moves swiftly into Burkes' law of 'type 2 fun' (fun-with-hindsight).” 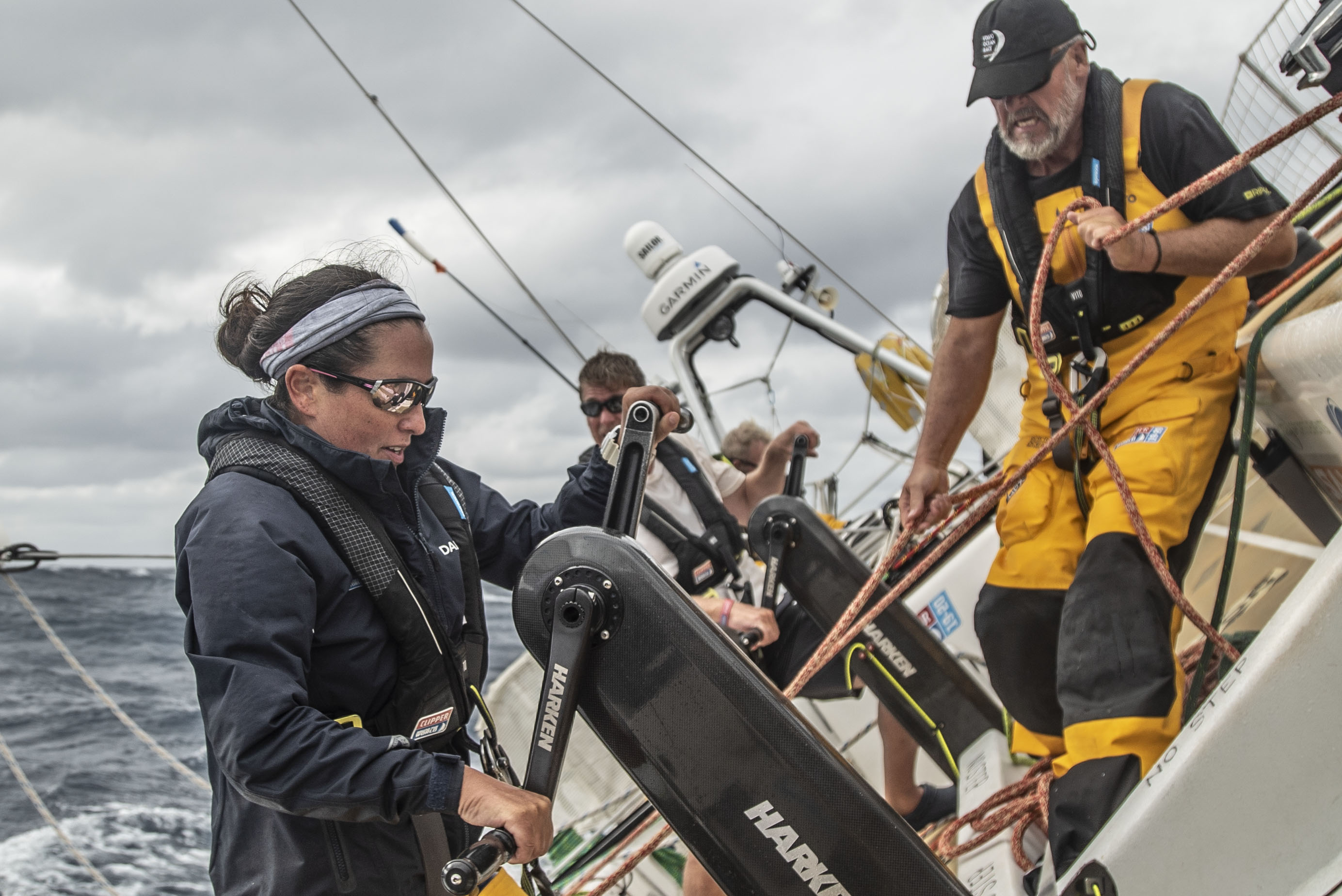 Midway through the race, the fleet was spread from east to west before converging to round the western most Japanese Ryukyu Islands. By this point, Qingdao and Unicef had carved out a lead and with the increased wind in the second half, the chasing pack could not close the gap.

Race 7 included two scoring gates. The first yacht to pass through the virtual gates gets three bonus points, the second receives two and the third awarded one. The wind and weather conditions contrived to present the opportunity for the leading teams to pass through the Scoring Gate East, gybe, head due west and then pass through the Scoring Gate West, thereby scooping up even more bonus points. Qingdao therefore added six, Unicef collected four and Visit Sanya, China picked up two points to add to their overall tallies.

The teams then raced downwind, east of Taiwan, and battled against the notorious Japan (Kuroshio) Current, which flows north and east of Taiwan, before heading back to Subic Bay. The second half of the race saw some excellent sailing conditions, resulting in consistently high boat speeds. A year ago, Visit Sanya, China, Skipper, Seumas Kellock said: “It has been a fast night, with the Code 3 flying we’ve been busting out average speeds of 12+ knots and surf up into the 19 knot range, it has been fantastic.” 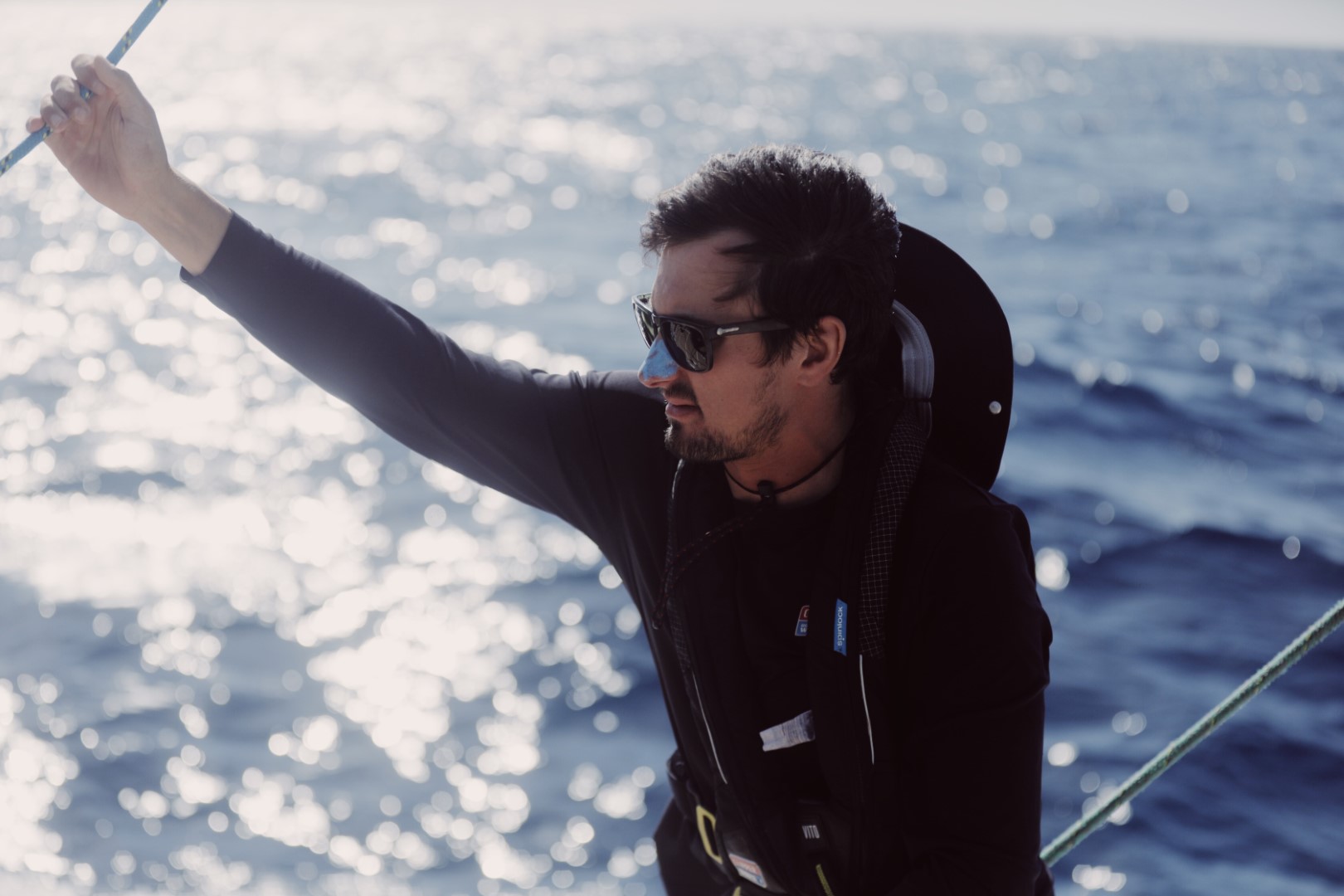 As the Lakewood Hills, Zhuhai race came towards its conclusion, the leaders were within sight of each other. Bold tactics and pushing its spinnakers to the wind limits, meant Qingdao retained the lead. The team finished first, its fourth win in the circumnavigation so far. Following in a close second was Unicef, keeping the pressure on until the final hours. In third was Imagine your Korea, with its third podium in four races.

Race 7 was also unique in that teams were given the option to compete for points in two Dell Latitude Rugged Ocean Sprints; the south or north sprint. The majority of teams opted for the northern route and the results were revealed to the eager crowd at the Prizegiving celebrations at the Subic Bay Yacht Club. 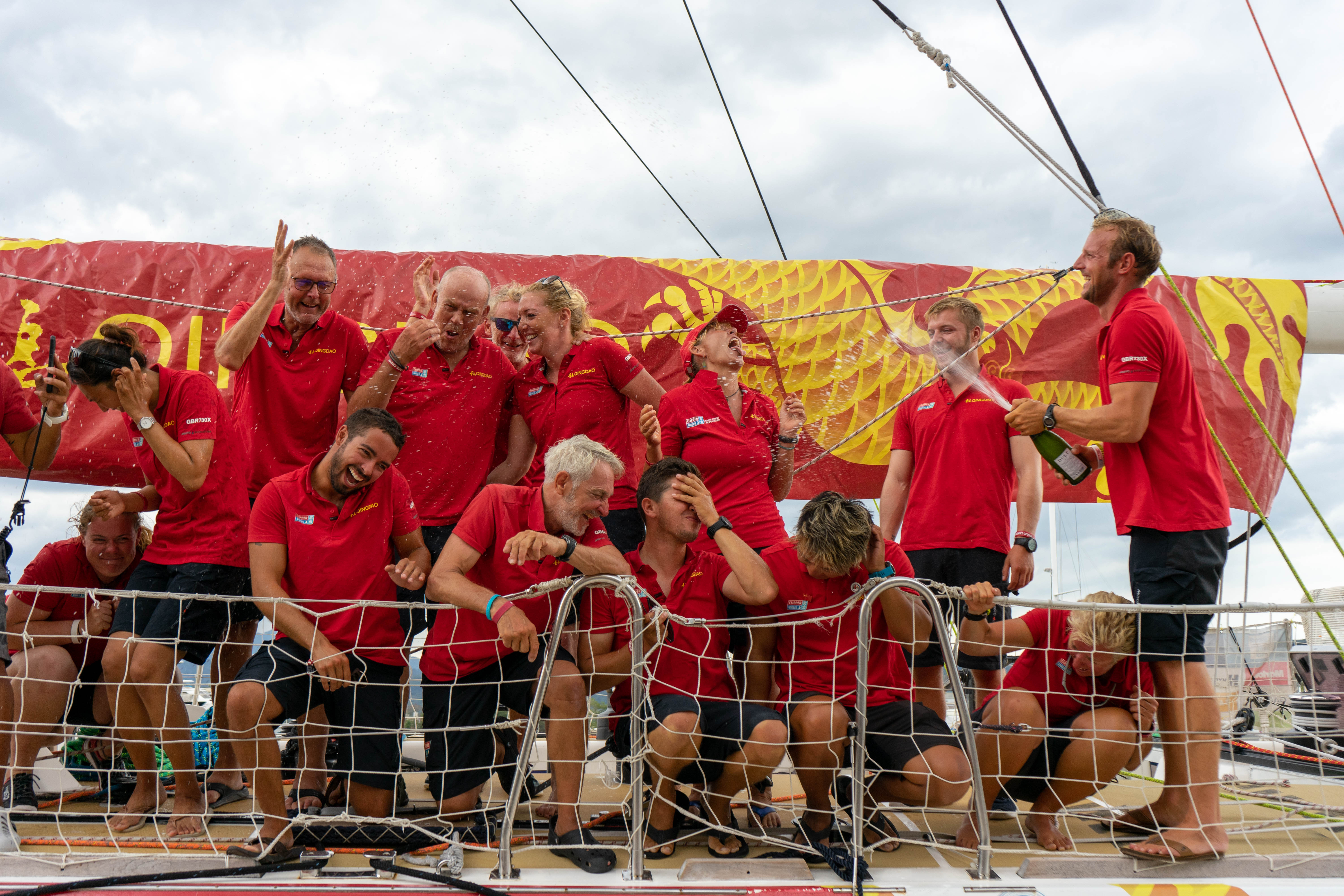 Third fastest was Visit Sanya, China, adding one point to their tally. Second fastest was Imagine your Korea, and the quickest, and adding three points, was a victorious Punta del Este.

On the way back to Subic Bay, just Qingdao and WTC Logistics competed for the bonus points in the Dell Latitude Rugged Ocean Sprint South. Qingdao added another two points to their 17 from winning and taking both scoring gates, after completing the sprint section eight hours slower than WTC Logistics, which added three points.

These results, along with all the achievements of the crew during Race 7, were celebrated during the Prizegiving event, where Sir Robin Knox-Johnston shared a message from the Zhuhai Organising Committee, saying: “Congratulations to all the teams on completing The Lakewood Hills, Zhuhai Race on behalf of our supporters, the Lakewood Hills and the Bank of China. We hope that you all enjoyed the race and achieved an unforgettable experience.” 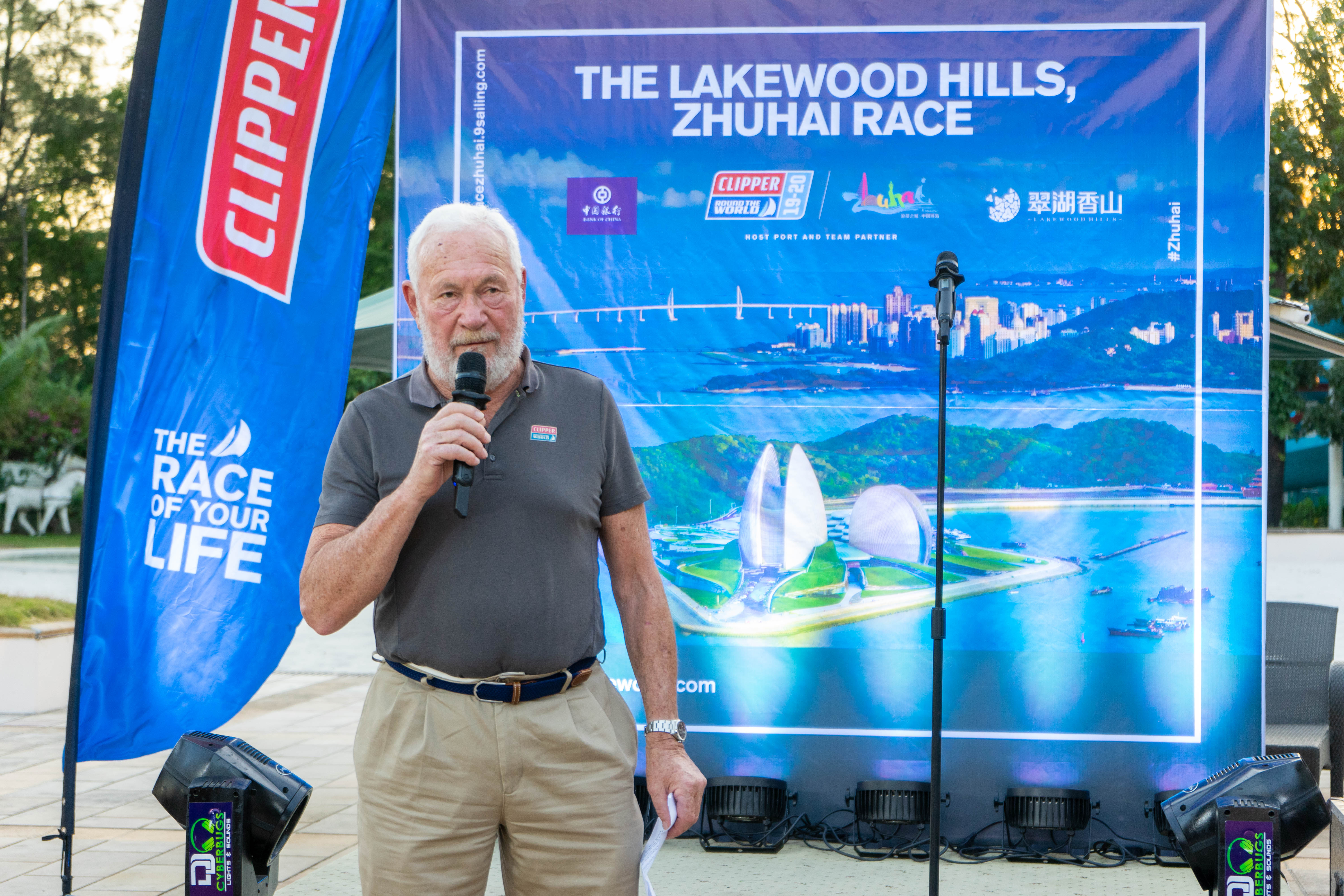