As the sun began to set behind Table Mountain, teams gathered to award top honours for the Stormhoek Race to the Cape of Storms to GREAT Britain, with Derry~Londonderry~Doire and Garmin joining them on the podium.

The three teams were first to cross the finish line in Cape Town late on 21 October but with the race being run on elapsed time, they had a tense wait to see if LMAX Exchange or Qingdao could complete the South Atlantic passage in less time.

GREAT Britain completed the 3,400 nautical mile journey from Rio de Janeiro to Cape Town in 14 days, 2 hours and 30 minutes when it crossed the finish line, meaning that given the time the two late starters set off from Brazil 83 hours and 10 minutes later, they would have had to arrive into Cape Town by 0740 UTC in order to win the race overall.

GREAT Britain Skipper Peter Thornton was with Race Director Justin Taylor and David Edmondson, ‎Vice Consul Trade and Investment at British Consulate General Cape Town when he learned the news. Peter says: “I was lucky enough to be in the Race Office when Justin called me over to his computer screen which had a clock counting down the elapsed time that LMAX Exchange and Qingdao would have had to beat in order to take a podium place. I was able to officially see when they had been racing for longer than we had been racing for and Justin said ‘Congratulations you are now officially first.’”

Garmin had led for most of the race when four teams were left battling it out for the podium places in the last 72 hours of racing. GREAT Britain crossed the finish line at 2030 UTC and was swiftly followed by Derry~Londonderry~Doire with Garmin coming in minutes later at 2102 UTC. Mission Performance came in fourth at 0053 UTC.

Having followed up its tight finish in Rio de Janeiro, where Derry~Londonderry~Doire finished just 0.8 nautical miles behind GREAT Britain to come fourth, with an even closer margin this time, Skipper Daniel Smith says: “Having boats so close together in those final hours of racing makes everyone go faster because you can actually see the boats you are racing against and the crew had to push really hard to maintain our position. We picked up a couple of points at the Scoring Gate and because that meant going the wrong direction at times we could see ourselves falling down the positions but those extra points have proved vital because even though we finished in second place, we are now top of the Overall Race Standings with GREAT Britain.” 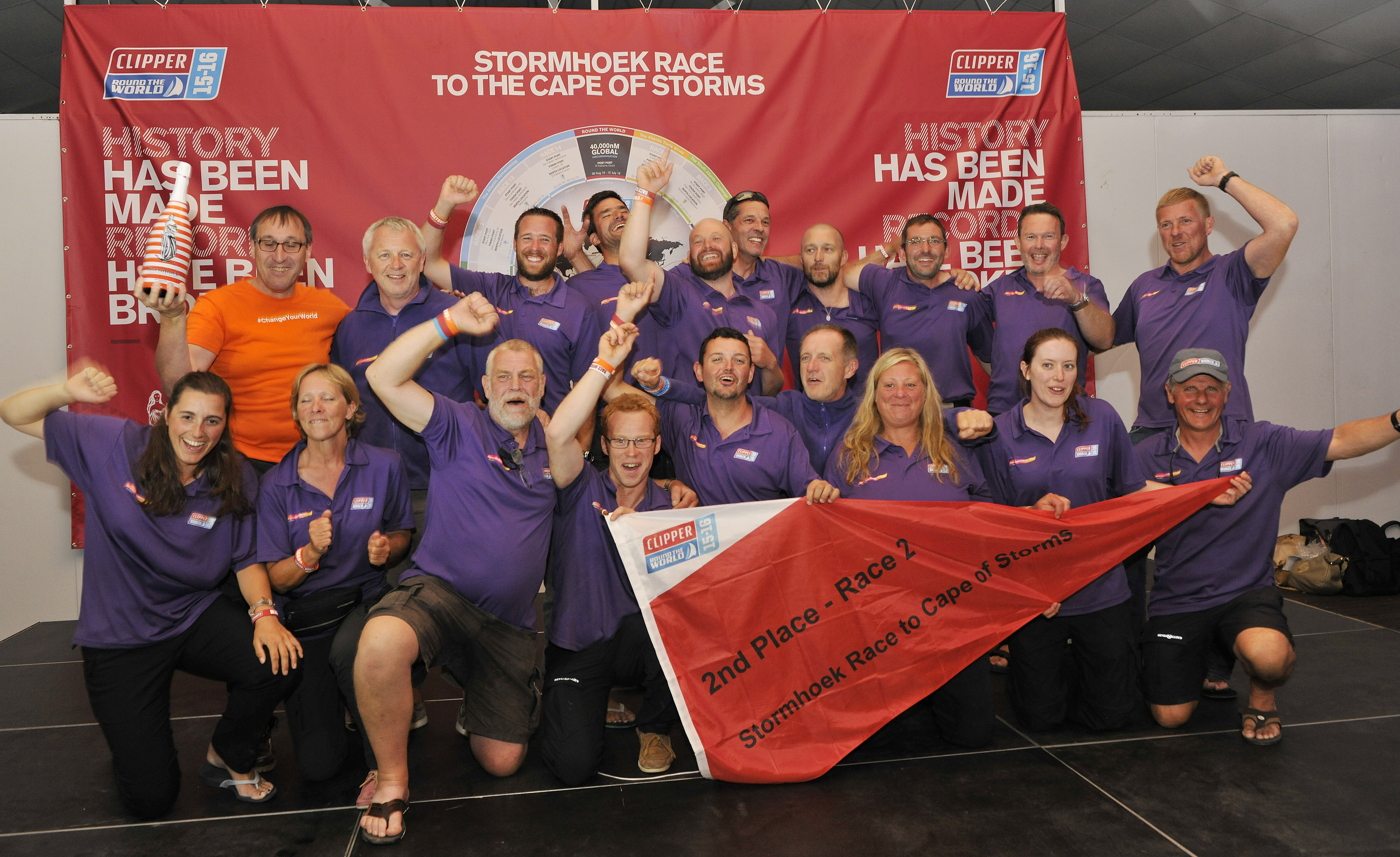 It was a night of double awards for Garmin who took the final podium position and the Stormhoek Social Spirit Award which is given to a nominated crew for its team spirit. Bernard Fontannaz, the owner of Stormhoek Wines hosted the party, and explained why they had decided Garmin was the most deserving team of the Stormhoek Social Spirit Award in the second race: “We thought Garmin should win as the supporters have recognised both the crew and Skipper Ashley Skett.

“The Garmin supporters have set up a social system to support crew joining and returning and from their Twitter account we can see they are engaging with communities and schools. Garmin Skipper Ash has developed a winning team spirit on board and they have shown that having a strong social spirit results in being a leading team. The Clipper Race is about winning and being a strong team.”

Skipper Ash added: "I am amazed and surprised. I had no idea we were going to get the Social Spirit Award, but I can understand the reasons why. We've got a major following back home. They are so supportive of us through Facebook, Twitter and everything. To come third in the race was an amazing achievement. I think we really deserved it and we are going to be pushing hard for the top spot.” 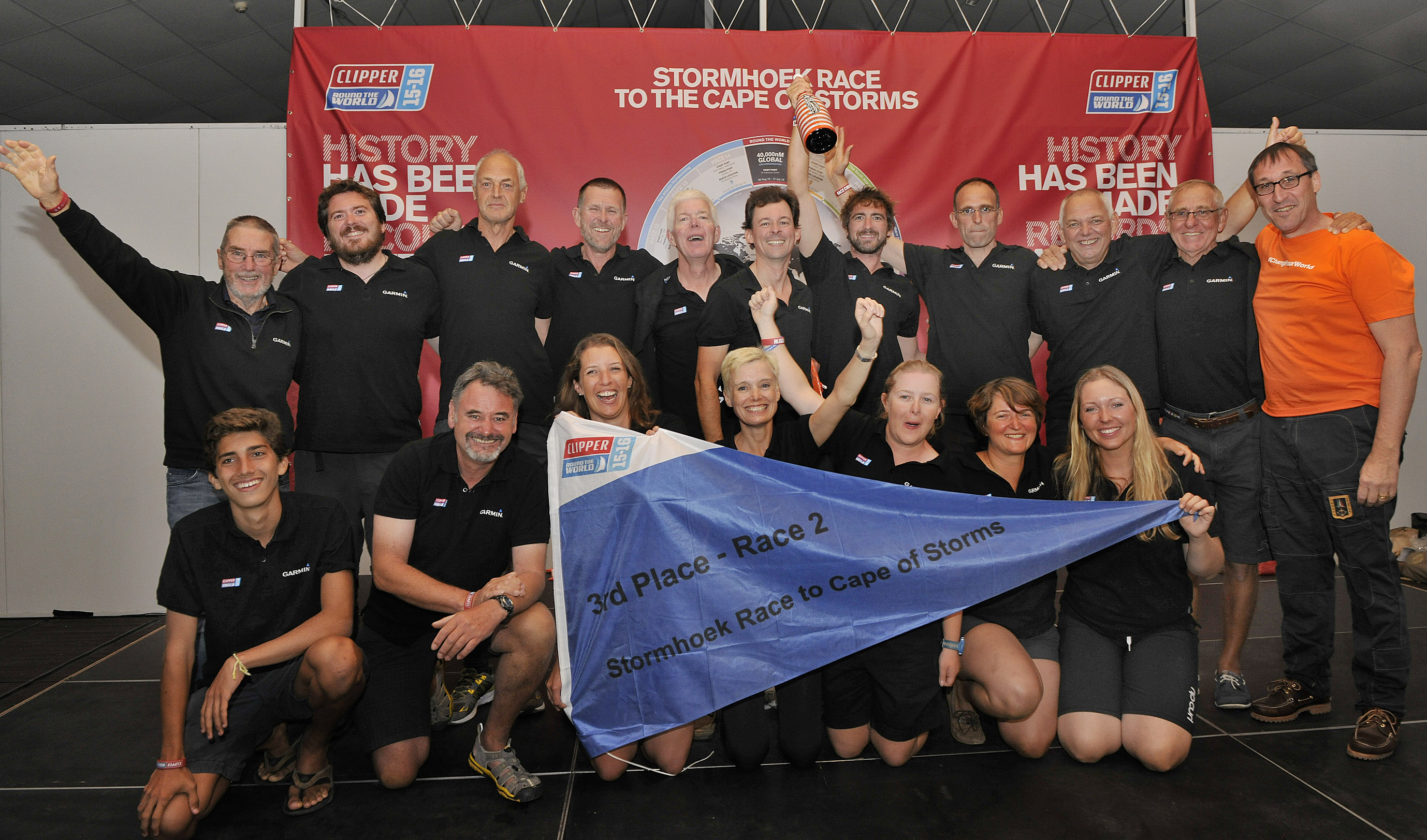 IchorCoal collected the two bonus points on offer for the Ocean Sprint and Qingdao, which is still racing and expected to arrive in Cape Town on Monday, took three points for having the fastest time to the Scoring Gate, with Da Nang – Viet Nam getting one point for passing through third behind Derry~Londonderry~Doire.Race 3 from Cape Town to Albany, Western Australia has been named The Wardan Whip and will start with from the V&A Waterfront on Saturday 31 October at 1530 local time (1330 UTC). This follows the Departure Ceremony at 1200 local and what promises to be a spectacular Parade of Sail past the Boardwalk.

The name for Race 3 comes from a competition run in Albany for members of the public and the winning name was picked due to Wardan meaning Ocean in Noongar, and Whip due to the southerly winds.

For up to date ETAs for LMAX Exchange and Qingdao click here.

The Overall Race Standings will be updated once all twelve teams have arrived in Cape Town and penalty points for Race 2 will be added once they have been calculated by the Race Director.

The time has passed for either LMAX Exchange or Qingdao to claim a podium position in Race 2: The Stormhoek Race to the Cape of Storms. With both boats racing on elapsed time, they needed to finish within 83 hours…