Despite its position towards the back of the fleet for the majority of the 33-days, PSP Logistics made some sound tactical decisions after it hit the wind hole off the South coast of Brazil, and propelled itself up the fleet, becoming the second team to cross the finish line at 01:03:13 UTC (23:03:13 local time).

Arriving into port just ahead of midnight in some wet and windy conditions, Skipper Roy Taylor said: “It was long, tough at times and quiet at others, like in the doldrums, but a great start for us and really good to come in so high on the points board. We’re aware that finish time could change things but we’re watching their final miles closely. Anything can happen still!

“We didn’t have a particular agenda for this race. We wanted to go out there and test the water, test ourselves so to speak and see how we fair against the fleet. Safe to say the crew are chuffed to bits with their achievement. Ocean sailing changes people, for the better in my opinion. The crew will be enjoying themselves tonight, and rightly so. Very proud.” 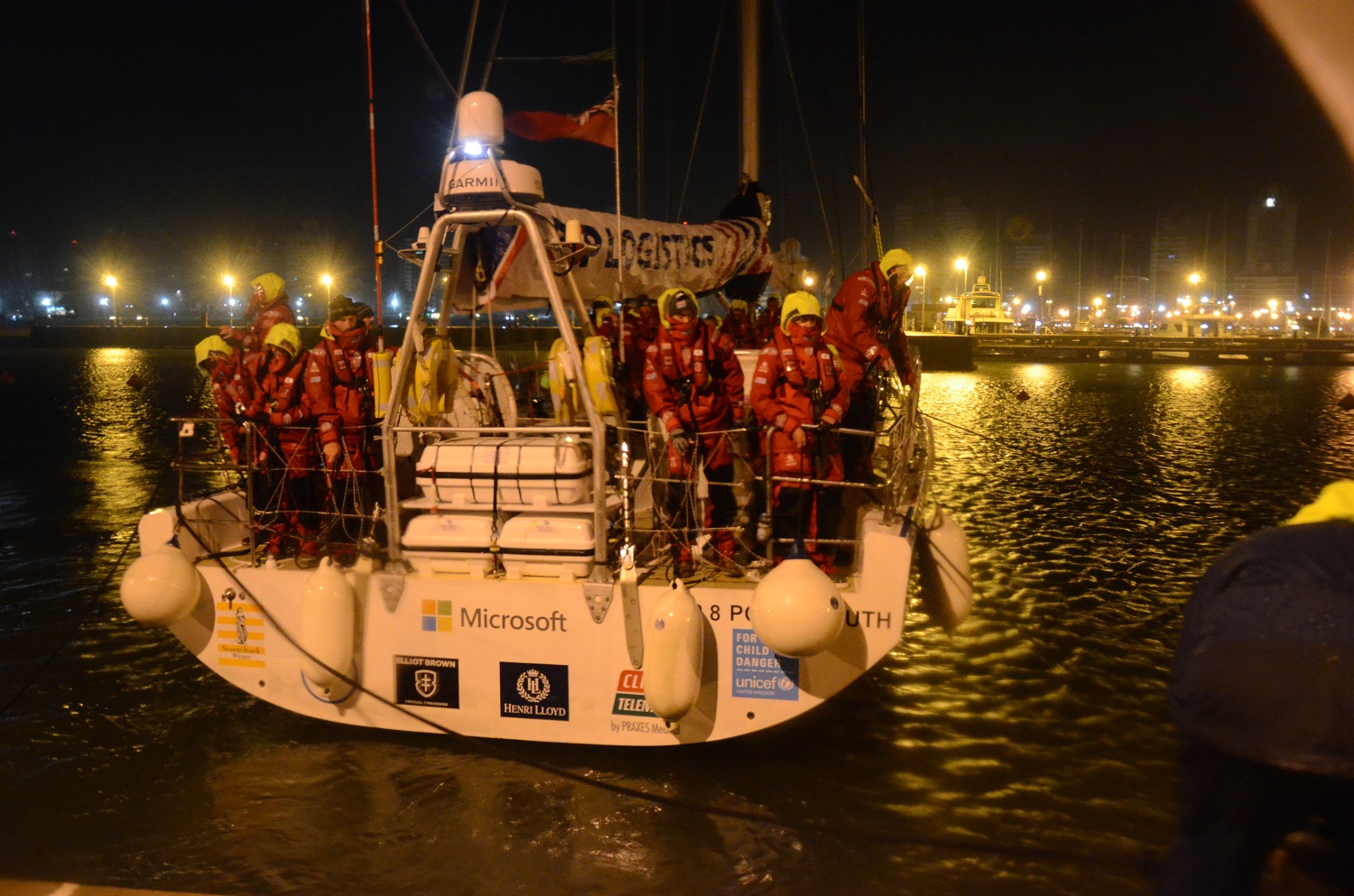 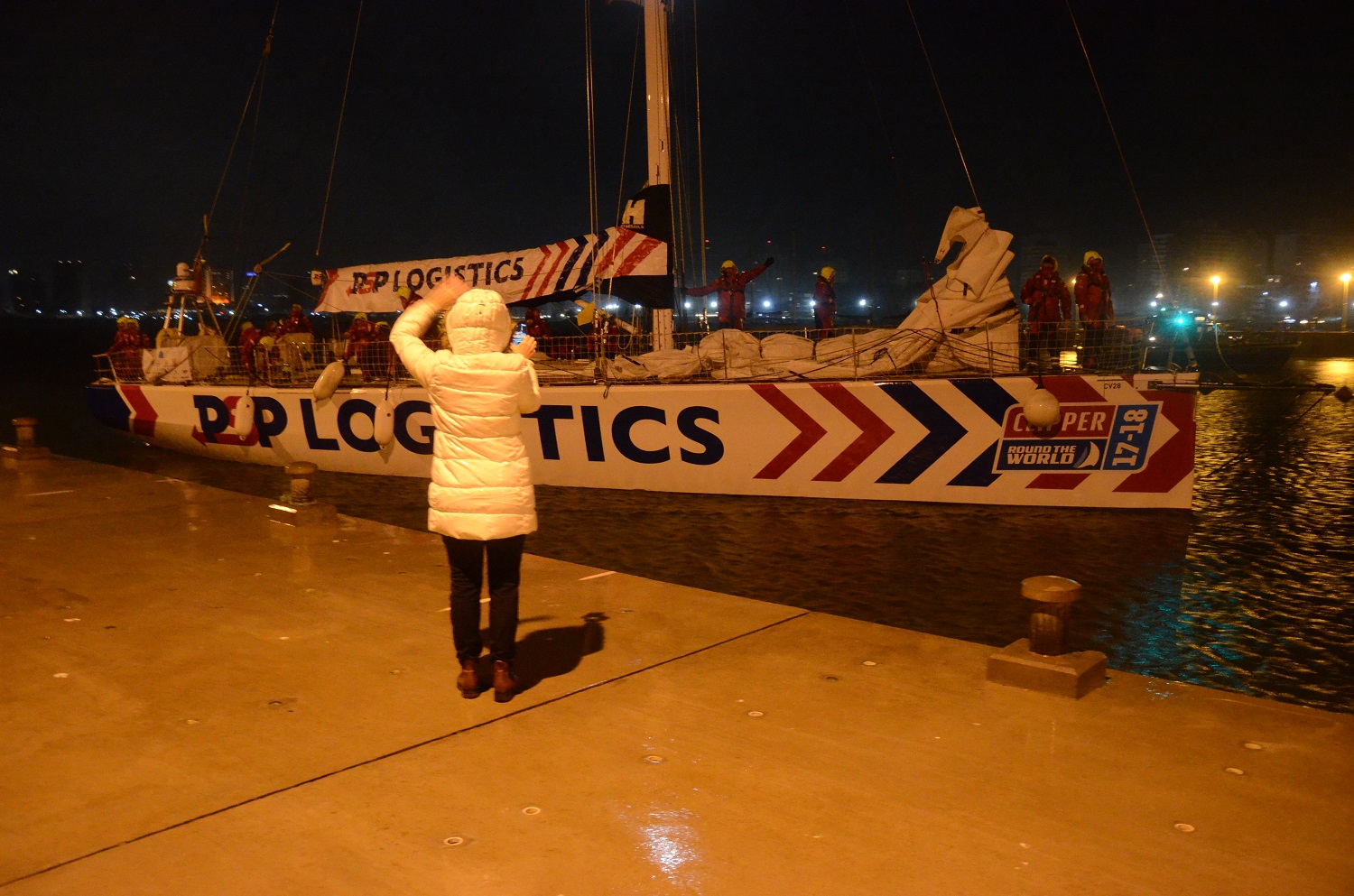 Fiona Robertson, is an A+E nurse in London who had no previous sailing experience before signing up. She says: “Very surprised [to be 2 nd across the line]. Our aim was just to get here safely for this leg and we were happy with that up until about five days ago when we realised actually we were in with a shot of possibly getting a podium position. After that we took it all a bit more seriously and became more competitive to try and keep GREAT Britain behind us.

“Roy’s main focus is safety and seamanship, and to get here without damaging the boat and ultimately to build us up as a strong team which we managed to do as well.”

Caitlin Lisle, 26, is an Editor for Cambridge University Press when not busy ocean racing. Her journey ends here in Uruguay. She says: “I chose Leg 1 because I wanted to cross the equator, the Atlantic, I wanted to do a really big ocean and start out with the team. I wanted a long leg, which I got!

“I haven’t quite got my head around the fact I am done with my Clipper Race journey. I was thinking about it when I was off-watch earlier and I felt that wasn’t real somehow. But I can’t wait to catch up on all the news to come. I’ll miss my team hugely, and it will be strange watching from home. They’ve been so great to sail with so I’m looking forward to following their progress continue.

GREAT Britain, skippered by Andy Burns , became the third Clipper Race team to cross the finish line just outside the harbour breakwater at 03:22:28 UTC (00:22:28 local), after making good progress out of the Brazilian wind hole.

As the only team that elected to play its Joker card during Race 1, GREAT Britain will double its finishing position points and also accrued two extra points for crossing the Scoring Gate in second place. 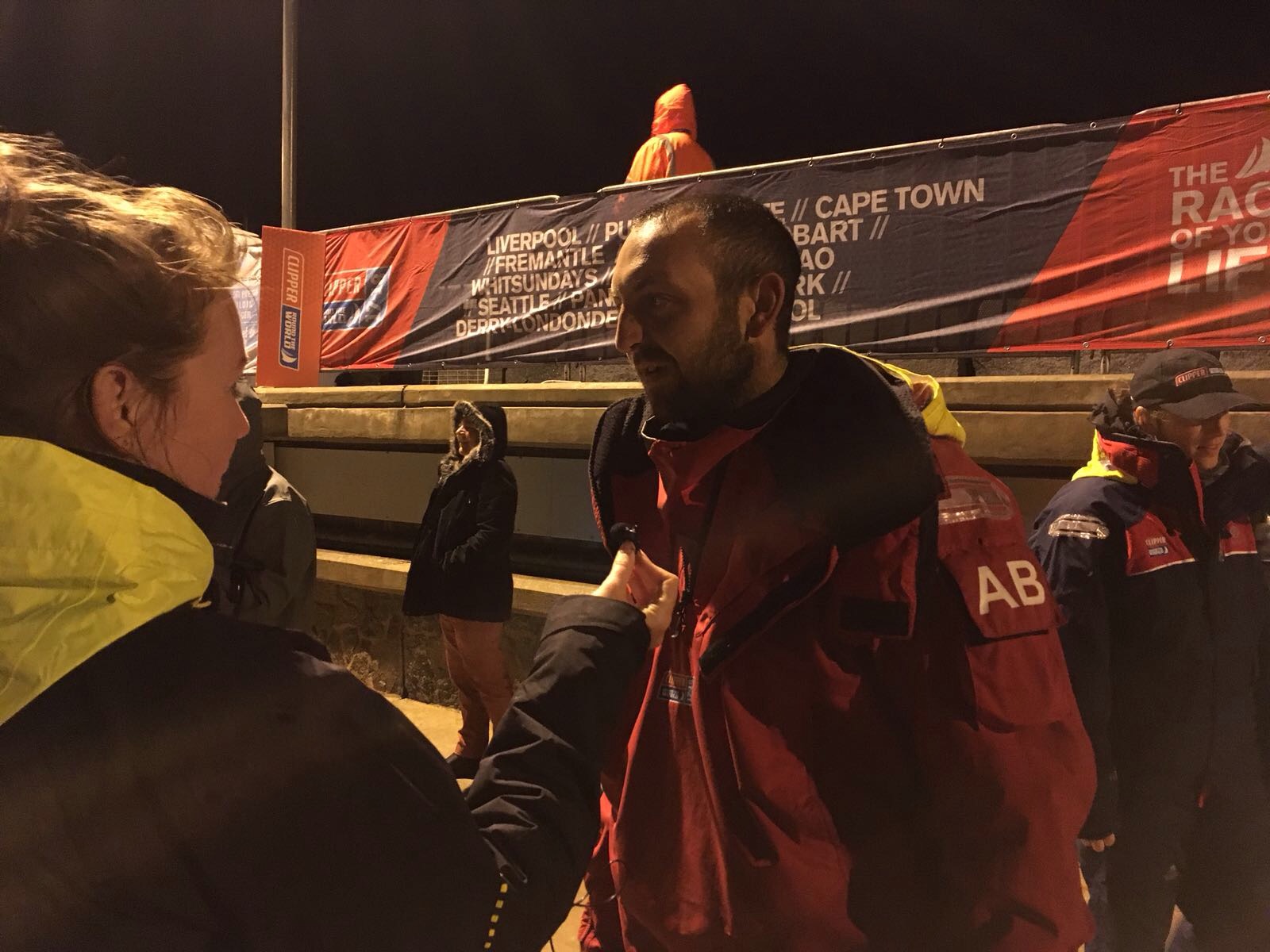 Skipper Andy Burns (pictured above) explained how his team’s early gamble paid off, saying: “We decided to play the Joker Card in our first race which was a big move. It was all going really well and then we hit the Doldrums and it was effectively a new race again, and it has come off for us so I’m really happy. With our two bonus points too, we’ve made a very strong, early start, which was our main objective.

Adding, Andy says: “The toughest part was the wind holes, absolute killer. From the Doldrums, and then we had two in the Southern Atlantic. Very tough. Our morale stayed pretty high though, we carried on pushing through to get a great result. The guys on board have been absolutely fantastic.”

Olympic skier/commentator and endurance junkie, Graham Bell, who had minimal sailing experience before signing up to the race, wrote from the boat about his race experience, said: “Most people consider the Tour de France to be the toughest endurance sporting contest on the planet, fought out over three weeks by teams of professional athletes that have trained for years. Now imagine a race fought out over ten months by teams of amateurs, with the skippers training them on the job...I would argue that the range of skills needed for keeping up the intensity of being a Clipper Race Skipper is much greater.

Graham adds: "This is the first time I’ve crossed an ocean. I love endurance and five weeks at sea definitely ticked that box for me. I’m kind of looking forward to going for a run now actually. Weird to say I know but it’s so good to be back on land, with lots of space around!” 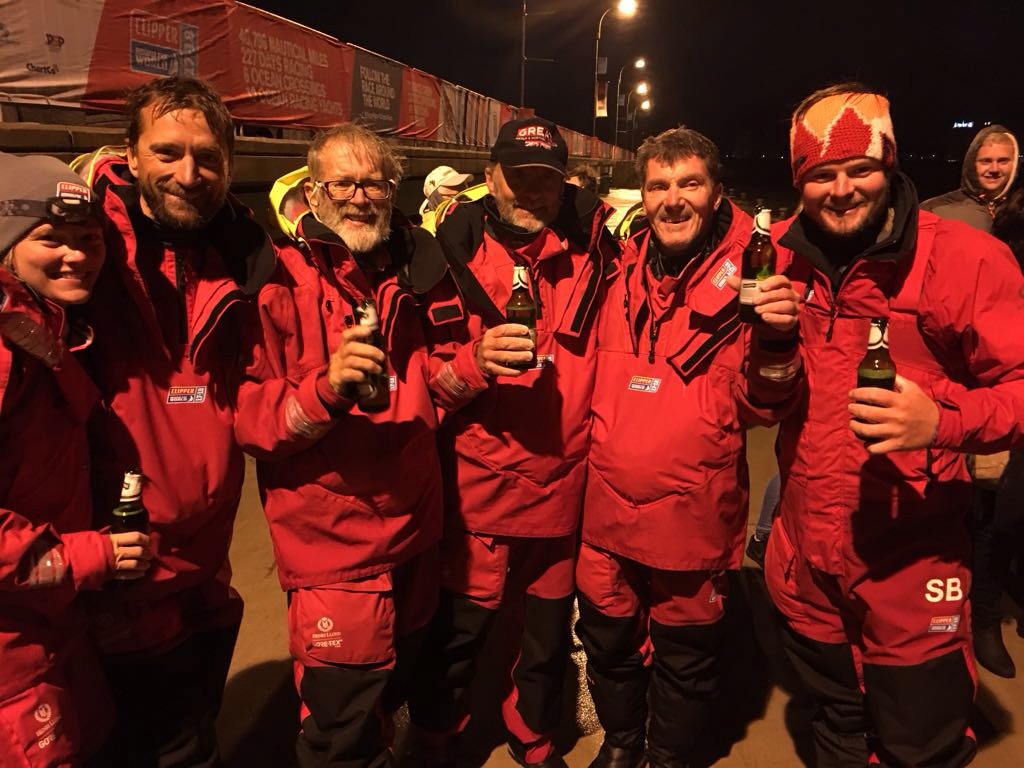 Pip O’Sullivan, 29, who was a complete novice to sailing before deciding to become a round the worlder, said: “It was awesome. Lots of highs and lows but can’t quite believe we are here now, we made it! We haven’t seen land or anyone else in four weeks! I’m definitely going to be swaying for a few days I think.

“I would like to say I think I know how to sail now. I feel much more confident and definitely feeling really rooted as a round the worlder which is good to be able to say. I’m looking forward to helping others as we continue so that’s really cool.

“It’s crazy how much can happen in ocean racing. For us it all sort of came down to the last 500 miles which is crazy as we have travelled over 6,000. 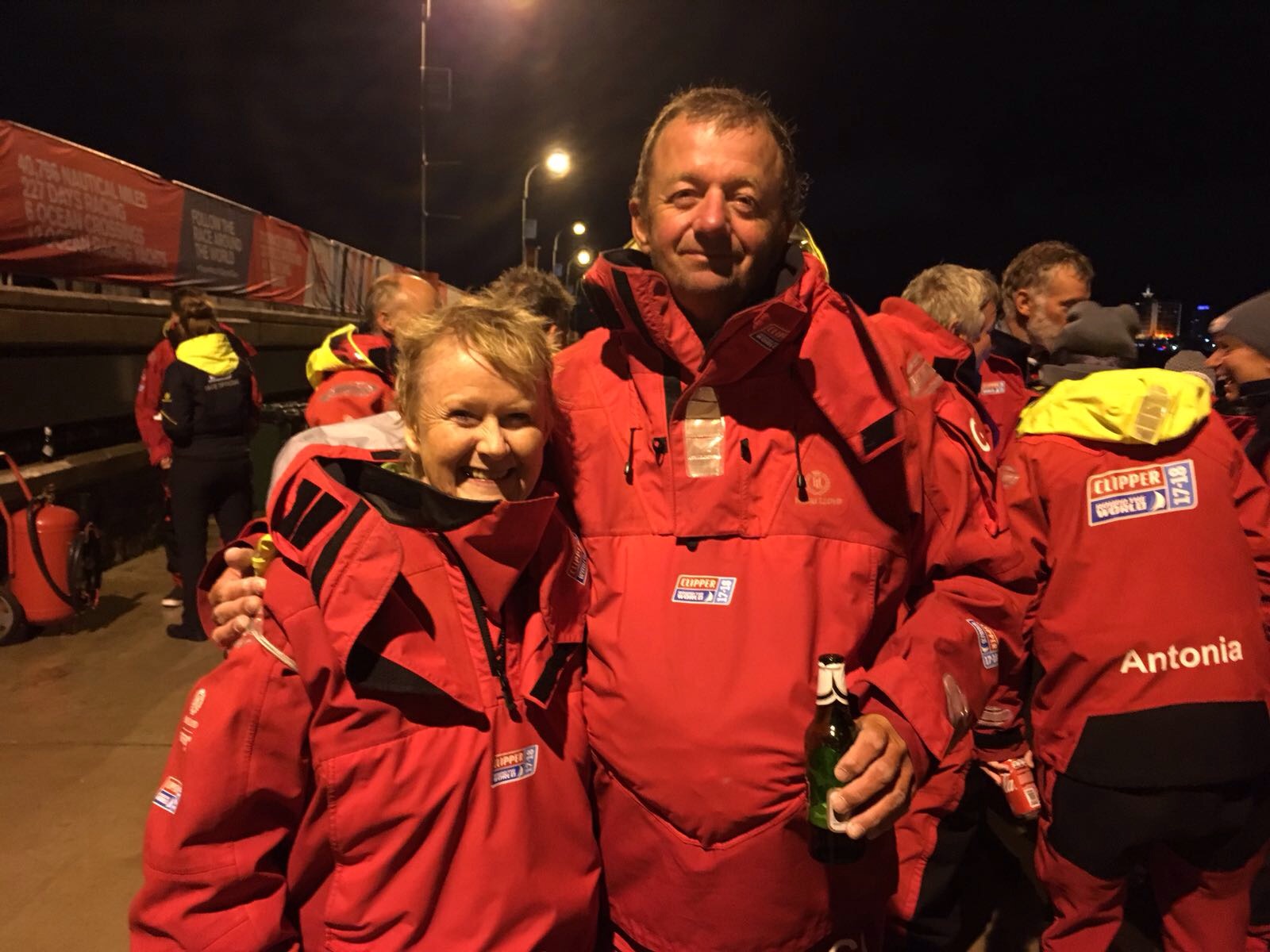 Despite the team arrivals stretching into the early hours of Friday morning, Yacht Club Punta del Este stayed open to welcome the crew and their supporters into its Sailors Bar to celebrate their completion of the Atlantic Trade Winds Leg.

Final standings for Race 1 will be confirmed after redress is applied to Visit Seattle and Greenings.