The battle for positions continues with Qingdao holding onto its narrow lead. GREAT Britain is hot on its stern however, with Sanya Serenity Coast moving back up into third place and the rest of the fleet continuing to jostle for positions in the heat.

As the routine of racing and living on board the Clipper 70s becomes increasingly normal, and as the Trade Winds continue to drive the fleet south, talk has now turned to the first opportunity to get points on the board; the Scoring Gate.

Chris Kobusch, Skipper of first placed Qingdao, alludes to the pressure building with its nearest competitor, reporting: “With less than 500nM to the Scoring Gate and GREAT Britain still hot on our heels, the tension and excitement on board is high. Everyone is eagerly looking forward to the next position report to see, if we gained or lost some miles to them.”

Whilst Andy Burns reports that his crew on board are having the time of their lives, racing and achieving their goals is still at the forefront of their minds: “Chris and Qingdao we are coming for you…” comes the response from the GREAT Britain Skipper.

The battle for the Scoring Gate will be tightly contested however as Conall Morrison, Skipper of fourth placed HotelPlanner.com, sets out: “Our race remains on for the Scoring Gate, we have shown up as third on the leaderboard recently, so there is a point to play for. It seems that competition is tight between Sanya Serenity Coast, Dare To Lead, Garmin, Unicef and ourselves.

“Hoping for another sunny day of trade-wind sailing today – only one Fastnet race to go to the Scoring Gate.” 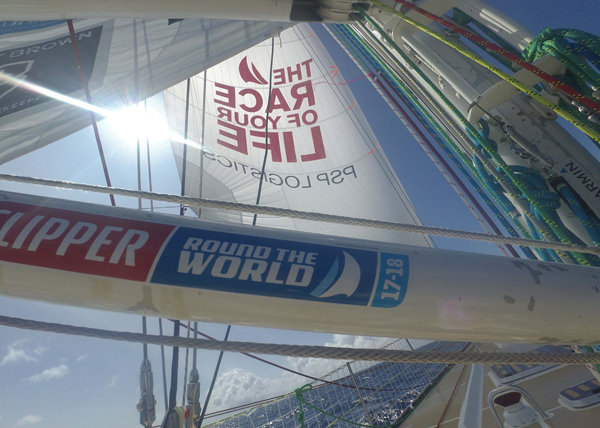 The teams in the middle of the fleet have also been assessing their tactics, working hard, focusing on coaching and remembering that the Clipper Race is a marathon not a sprint.

On Liverpool 2018, Skipper Lance Shepherd, whose team has been steadily climbing positions and is currently sixth, says: “Each day the crew are learning more and more and their capabilities are increasing tenfold.

“Our course is still going well as we head due south and prepare to reach the Doldrums. The crew seem to be really hitting their stride when it comes to spinnaker drops, wooling and hoists. I'm very proud of everyone's work ethic, especially in this heat.”

Visit Seattle has recently slipped down the leaderboard, now in eighth. Nikki Henderson reports: “Yesterday we shifted focus as a team. Having initially been very caught up in the competition, we perhaps forgot what our overall aim was for Leg 1. We got together as a team over lunch, and after a long discussion we decided to refocus our energies to learning, training, improving our skills and having fun!” 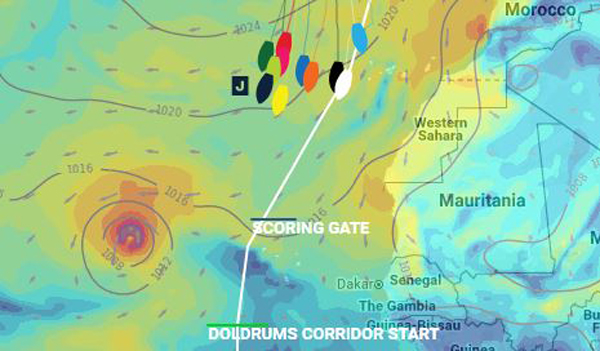 The Trade Winds have propelled the fleet so far south that it may see some high-level cloud associated with Hurricane Irma which is heading west in front of their path. Whilst it shouldn’t affect teams directly, it might leave a rather interesting synoptic wake which could affect the fleet over the coming days.

That’s a possibility Gaëtan Thomas, Skipper of ninth placed Garmin, has his eye on saying: “We are still looking for the Scoring Gate, but it is more important to see what is behind it, as the weather looks pretty crazy after the Cape Verde Islands up to the [Doldrums] corridor. A lot of things might happen and the positions will keep changing, the spectacle is just starting!”

Further back, after its first 24 hours back in the race, interim Greenings Skipper Dan Smith reports: “The waves are starting to build and although we haven't been doing huge distances we have covered good ground with the weather we have had.

“The wind is a bit changeable as the clouds pass through but not enough yet to warrant a sail change so for now we keep racing south waiting for an opportunity to narrow the gap with the eleven yachts in front.”

The overall time for Greenings for Race 1 will be calculated as the elapsed time from Race Start in Liverpool, until the time the team crosses the finish line in Uruguay. An appeal for redress has been made to the Race Committee for time lost during the diversion, meaning final positions for this opening race will be announced after all teams have arrived into Uruguay.

UPDATE: 01/09/2017 - 1330 (BST)NOTICE OF REDRESSThe Race Committee has confirmed it is awarding redress to Greenings after its forced diversion to Porto for a replacement Skipper. The total time to redress is 2 days, 10 hours, 44 minutes and 51 seconds.In accordance with the…