Although the Clipper Race fleet spent the majority of the race to Panama in close quarters, it only took minutes for a split to emerge in Race 11: Nasdaq Race to New York – the second stage of the USA Coast-to-Coast Leg, the penultimate Leg of the 40,000 nautical mile, eleven month circumnavigation.

Nasdaq was the first to break away, opting for an easterly tack to avoid the wind hole settled close to the Le Mans start off the Atlantic coast of Panama. Skipper Rob Graham says: “Nasdaq tacked eastwards as soon as our mandatory 10 minutes holding course during the Le Mans start was up. We got a little worried when nobody followed but soon had PSP Logistics on our tail.”

Two soon became four as GREAT Britain and Garmin also joined the breakaway group. GREAT Britain Skipper Dave Hartshorn explains: “Unlike some of the previous races, there is already a split in the tactics being played, with some of the fleet staying on a starboard tack and a few of us tacking over to a port one.

“We are currently closed hauled, with the Yankee 1 set, and sailing in about 15 knots of wind. Most of the evening we could see Garmin's masthead light along with PSP Logistics' to the south of us, but now it's just PSP Logistics as Garmin has tacked north.”

Whilst Garmin is now on its own heading north, Skipper Gaetan Thomas is happy with the progress so far, reporting: “We tacked early to get a better angle later on our way to the Mandatory Gate near Dominican Republic. We will see if it pays off.”

It’s tight racing in the other grouping, with less than 4 nautical miles currently separating first from seventh. After being the windward boat in the Le Mans start, HotelPlanner.com sits in second place and Skipper Conall Morrison comments: “We made the most of our good start position from the Le Mans draw and are still well positioned in the fleet. 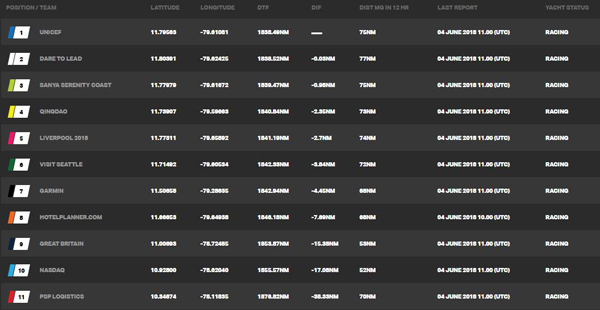 “Our first waypoint between Jamaica and the Dominican Republic is 425 nautical miles away. So far the wind remains light, but we can see the occasional dark cloud and there are thunder and lightning patches about.”

Looking ahead, the wind is set to gradually build and veer as the fleet nears the northern tip of South America. But as Clipper Race Meteorologist Simon Rowell reports, a ridge in the high pressure area will see the breeze will die off in the vicinity of the Windward Passage between Cuba and Haiti, meaning the teams will need to plan their approach carefully.

The race to New York is expected to take approximately 12 days, arriving at Liberty Landing Marina between 14-16 June. But to get there, the fleet will need to navigate its way through fickle winds and a complex arrangement of islands and reefs in the Caribbean, before trying to utilise the Gulf Stream to gain some extra speed in the final stretch to the finish line.

To follow the progress of the teams, keep an eye on the Clipper Race Viewer. You can also read the Skipper Blogs in full in the team pagesor learn more about life on board in the Crew Diaries.

Following recently established diplomatic relations between China and Panama, the inaugural Chinese Ambassador to Panama, Wei Qiang, has described the Clipper Race as an inspiration and a positive step for Chinese sailing after being invited to meet with crew from Chinese entry Sanya…