On Day 23 of Race 2: The Commodore’s Cup to Punta del Este, Uruguay, Qingdao has taken the lead from close rival Visit Sanya, China following an interesting and squally 24 hours.

Stealth Mode didn’t go quite as planned for Visit Sanya. When the team reappeared at 0600 UTC this morning on the Race Viewer, it showed that 30 nautical miles (nm) now stands between them and Qingdao. The light wind lasted longer then Visit Sanya Skipper Seumas Kellock had hoped, and after being hit with a squall, where wind speeds went from 7 to 28 knots in 20 minutes before disappearing again, it has been a tough 24 hours. 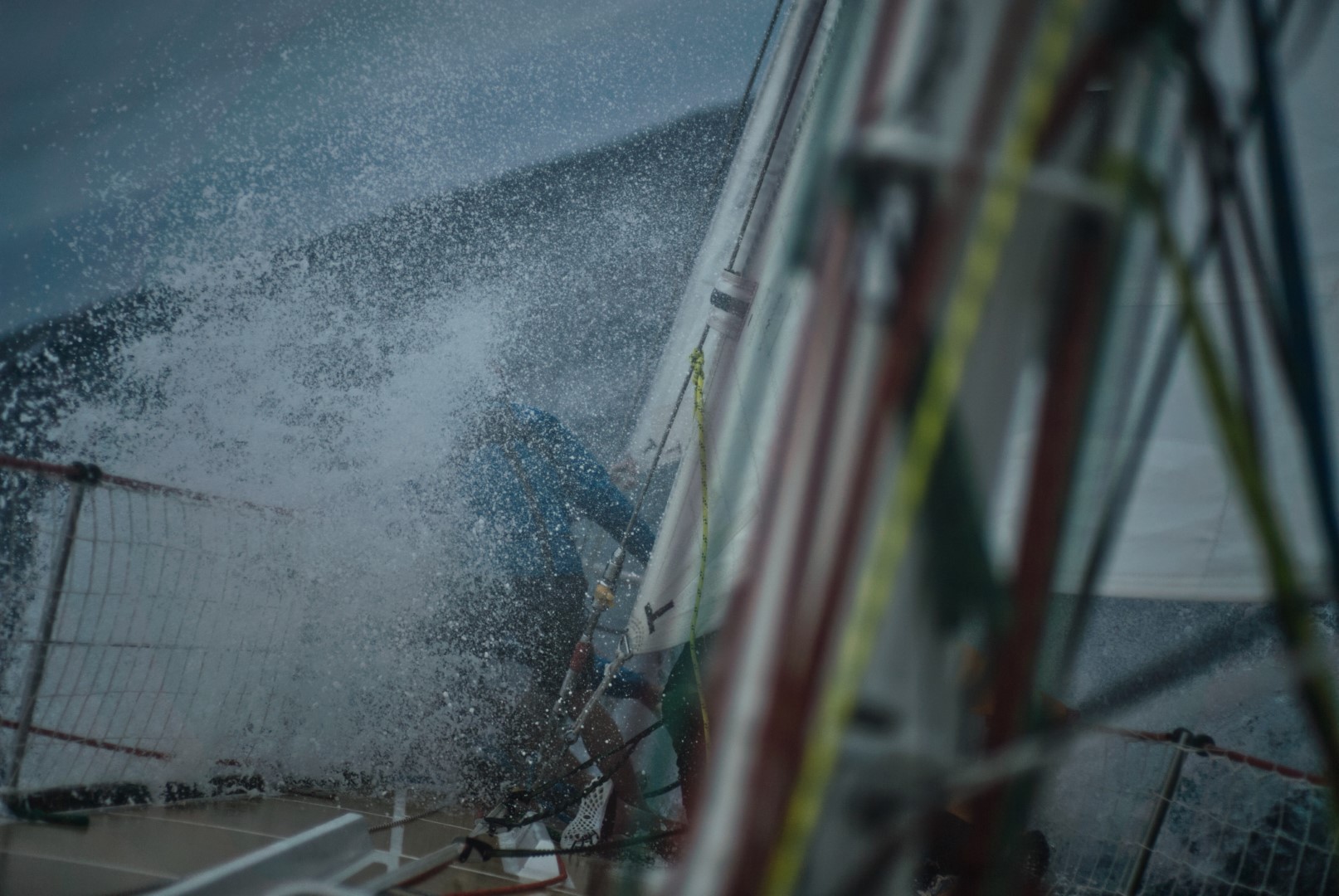 IMAGE: Waves crash over the bow of Visit Sanya, China

Seumas reflected: “Currently we are sitting in second place, which I’m not going to lie stings a wee, but having led the race for the best part of 3,000nm, still onwards and upwards.

“There is a lot of change in the weather between here and Punta del Este and it’s not over until it’s over.”

Ha Long Bay, Viet Nam remains in third with a comfortable, but not guaranteed, lead over Dare To Lead chasing in fourth. In similar weather conditions to the leading two teams, Ha Long Bay, Viet Nam Skipper Josh Stickland reported: “Well, it’s been an eventful 24 hours, I'll give you that much. We have had it all from squalls, to kite wraps, to wind holes, to even the other watch seeing an albatross.”

Less than 700nm separates the top three from the finish line in Punta del Este, but it is not going to get any easier. Clipper Race Meteorologist Simon Rowell is reporting that the last stretch is looking like being the most technical yet, with a second cold front around the finish forecast to gradually move up and effect all the fleet at some stage.

Elsewhere in the fleet, competition for positions remains fierce. Zhuhai and Unicef, currently in fifth and sixth respectively, have been trading places since the beginning of the race and continue to do so. Unicef Skipper Ian Wiggin said: “Today we raced Zhuhai. The battle has been unrelenting and the distance over the last 12 hours has remained at around 5nm.”

From on board Zhuhai, Skipper Nick Leggatt reported: “We did manage to pick up a couple of miles when we were able to gybe and cross clear ahead of a ship while we heard Unicef talking to the ship on the radio and discussing their intentions. Tactically it is not always a good idea to call ships when you have competitors around, but thanks anyway, Ian. 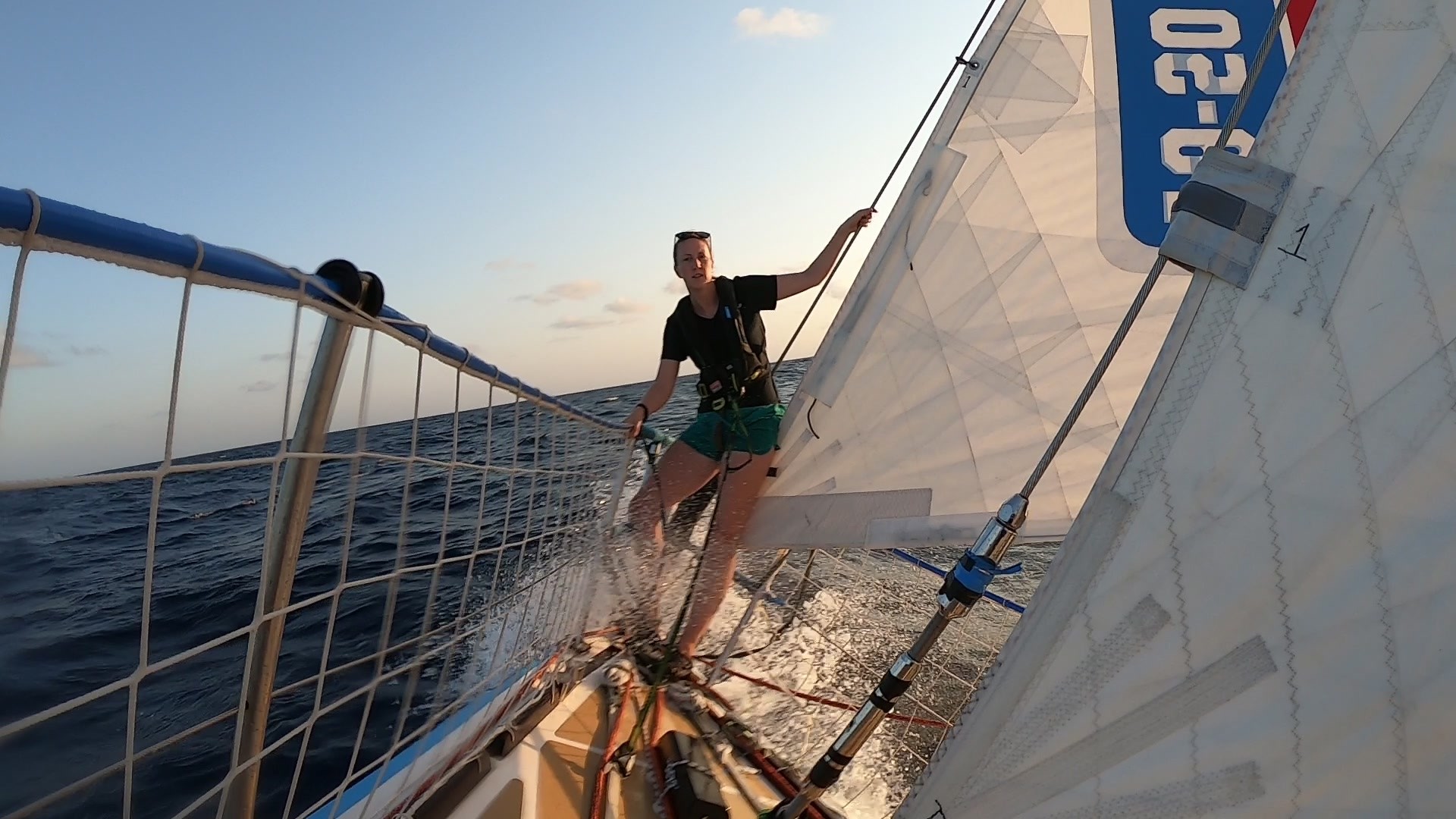 IMAGE: Sophie on board Unicef calls trim on the headsails

“Unicef is still very nearby and conditions are about to change dramatically. We are going to work hard to make sure that that does not mean a gap for Unicef to take.”

It had been an easier day for those not yet hit by the front at the back of the pack. The teams level with São Paulo in Brazil have been reporting fantastic sailing conditions and good boat speeds. David Immelman, the Skipper of GoToBermuda, said: “On the move again, doing 12 knots directly at the finish.

“Great work, keep that boat speed up guys. Especially as there is an area of low pressure in front of us, and it is one of the few times in the race we have had a catch up ability where the wind is higher at the back of the fleet rather than the front. Long may it last.”

Similarly on board Seattle, Skipper Ben Keitch said: “It's been a good run over the last couple of days, as we measure our progress by gaining ground on Zhuhai and Unicef, and keeping Punta del Este at bay.”

Can Qingdao hold onto the lead? Will Seattle catch Unicef and Zhuhai? What will the next 24 hours bring for the fleet? Keep an eye on the Race Viewer to find out.

Taking into account the latest forecasts, the ETAs for the fleet’s arrival into Punta del Este have been updated here.