All eyes have been firmly fixed on the Race Viewer during the sixth day of racing as the twelve Clipper Race teams battled it out to reach the Scoring Gate.

Following a fierce battle with Liverpool 2018 and Visit Seattle, Qingdao, currently in ninth place, crossed the Scoring Gate at 1349 UTC to secure three bonus points, a repeat of its Scoring Gate success during Race 1.

Liverpool 2018 skipper, Lance Shepherd, said: “We have finally managed to make it through the Scoring Gate, earning us a very respectable extra two race points, but it wasn't without a fight let me tell you.

“We had Qingdao in our sights the entire way as we trailed them by a mere four nautical miles and our guys loved every second of the race.”

For Visit Seattle, every point counts after dropping positions following spinnaker damage during Race 1. Skipper Nikki Henderson said: “We are chuffed with our extra race point - which may come in handy when paying for the repair work done to our spinnakers in Punta.”

After taking the Northerly route to cross the Scoring Gate, time will tell if they can make up the additional miles to catch the leaders sailing closer to the rhumb line. 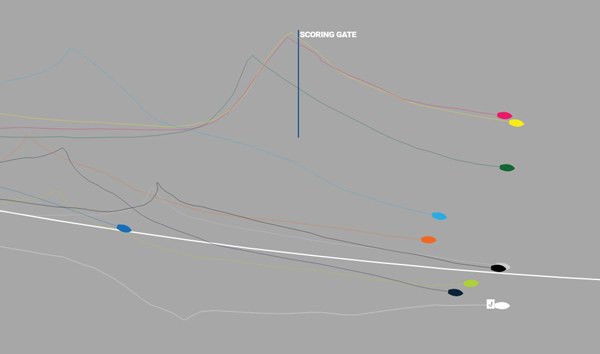 Elsewhere, there has been a shakeup at the top of the leaderboard with just three nautical miles separating Greenings, Garmin and Dare To Lead. After holding onto first place for five days, Dare To Lead has slipped into third place behind its closest rivals. Despite this, focus remains on maximising its position after deciding to playing the Joker. Skipper Dale Smyth comments: “The next few days hold good wind so it is neck and neck again, drag racing each other so no rest in the near future”.

“We just kept saying to ourselves ‘a stitch in time saves nine’. In all seriousness, thanks to Wendo for being a good neighbour.” 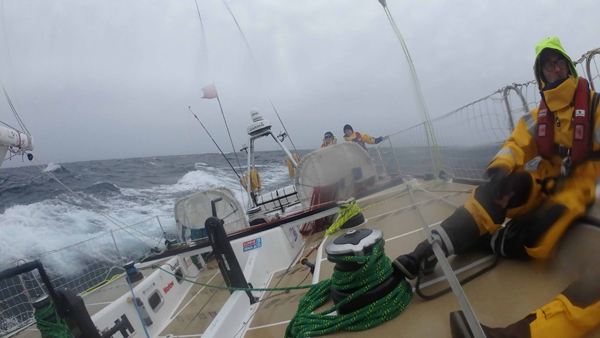 IMAGE: On deck of Visit Seattle

HotelPlanner.com currently sits in sixth place and Nasdaq in seventh. Nasdaq Skipper Rob Graham said: “We missed the lightest winds near the centre of the high that slowed down some of our rivals, and we're making good speed towards Cape Town across a relatively flat South Atlantic Ocean. The wind is slowly swinging from the East through North East to North which is a favourable direction for us.”

Eleventh placed Unicef is now taking advantage of the building winds and has covered the more nautical miles in the last twelve hours than any other team. Despite this, Skipper Bob Beggs is very aware of the remaining ground Unicef must cover to move its way up the leaderboard, commenting: “We now need a game changer to get back in the race!”

The high-pressure system that caused the fleet such frustration over the last 24 hours has now passed over to the East and the fleet is now benefitting from the building winds behind it and therefore better boat speeds.

Clipper Race Meteorologist, Simon Rowell, has advised the teams that the next front is expected to pass over them in the next 24-36 hours bringing gale force winds, strong gusts and the likelihood of heavy and thundery squalls. The results will be tricky helming conditions from the gusts and high wind speed.

All the well wishes in the fleet are still being sent to PSP Logistics after its forced return to Punta del Este. PSP Logistics suffered damage to its starboard rudder when it was hit by a whale early on during Race 2. Repairs are going well and the team is still in good spirits. For all updates on PSP Logistics please visit our website.

After an intense and action-packed few days since leaving Punta del Este, Uruguay, a high-pressure system has affected many of the teams in the fleet, frustrating their progress in the Stormhoek Race to the Cape of Storms.Dare To Lead continues to be in first place…