Race 4 Day 13: Sprint or a stroll in the sunshine?

Lighter winds and sunshine greeted the teams towards the front of the pack on the thirteenth day of racing in The Marlow Southern Ocean Sleigh Ride. It is time to be sprinting as the teams compete in the Dell Latitude Rugged Ocean Sprint but has Mother Nature got other ideas?

Reports from the leaders show the days of high speed winds pushing the teams forward has come to an end for now. Whilst it is a welcome break for some, it’s a little too much of an extreme change when the close competition is heating up.

“It is the most beautiful day; blue skies and fluffy white clouds, the sun bathes the deck, the sea is gentle and Dare To Lead rolls gently with it. Were it not for the race it would be ideal, we are once again on the go slow, not for any lack of desire to move swiftly along.” Dare to Lead’s Skipper Guy Waites says.

Maintaining third place position, Imagine your Korea’s Skipper Dan Smith said: “We knew it was coming, but after a good run building up some decent mileage we are grinding to a halt. The guys have been saying they could not wait for it to calm down but everyone on deck would rather have 50 knots of wind than two just now”.

Meanwhile on board sixth placed WTC Logistics, Skipper Mark Burkes reports: “We are now making sedate but efficient progress pretty much directly to our next waypoint. Breeze is forecast to drop (which has largely already happened) and then we hope to catch the northern sector of a new low passing north to south in front of us over the next 36 hours.” 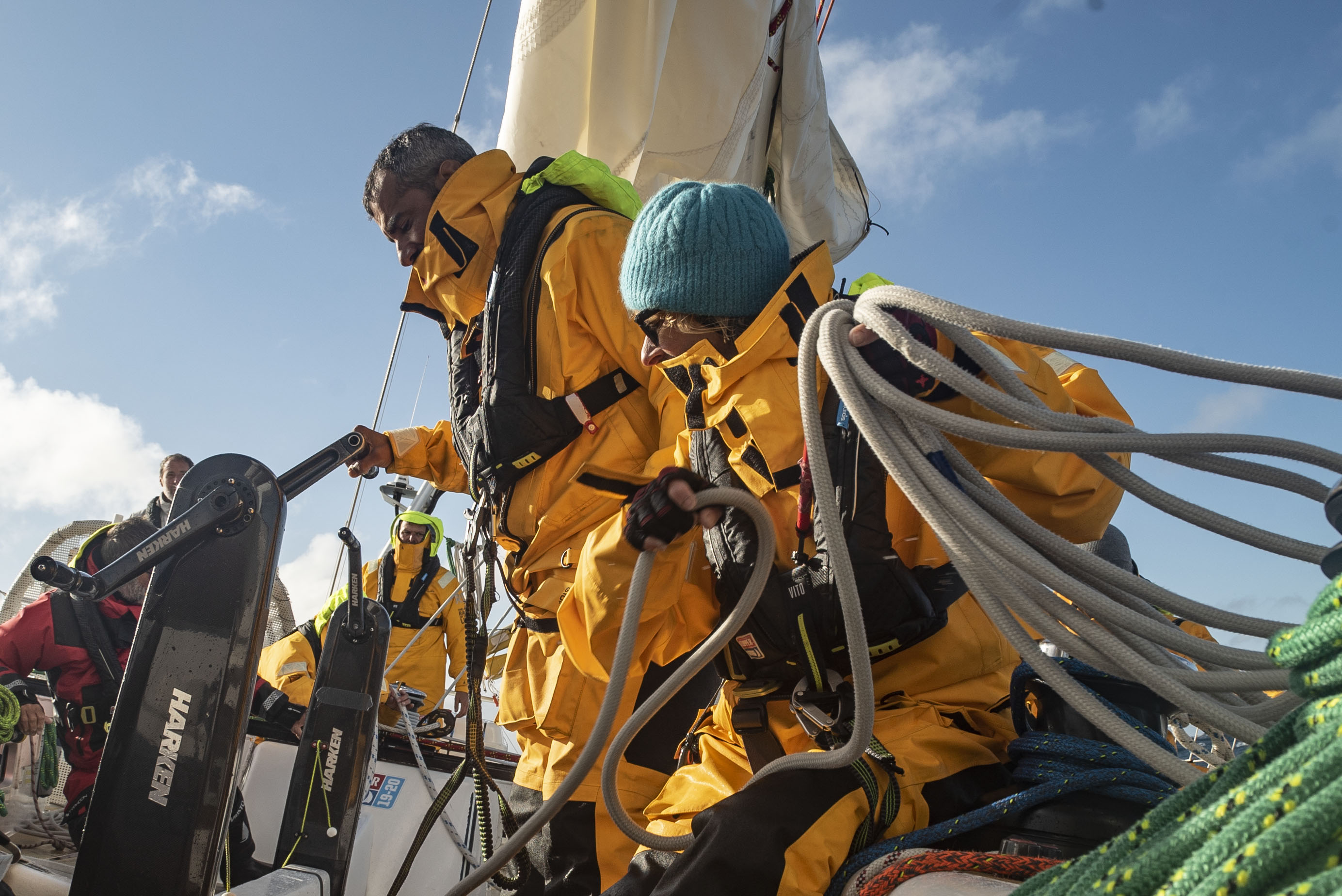 It’s squall watch for Unicef which is in an area of more mixed conditions. Skipper, Ian Wiggin,explains: “The wind gradually built yesterday as expected. We reduced sail throughout the day which allowed us to keep sailing close to the wind. After a fast night of power-reaching in calm seas, the wind is now going more northerly which means that we will be able to sail a little more directly towards Australia. It is great to be clear of the coast and to be making better mileage now.”

Looking ahead, he said: “We are expecting heavy squalls later today as a front passes over us. We must try and maintain a 10 knot average speed in a south-easterly direction over the next few days to avoid being swallowed by a large, slow moving area of light wind.”

Punta del Este and Visit Sanya, China are getting back used to both racing and routine after their extended period ashore. Having now overtaken Visit Sanya, Skipper of Punta del Este, Jeronimo Santos Gonzalez says:“After three weeks on land, it is getting harder to get accustomed to the watch system routine. Waking up in the middle of the night to be on deck sailing for 4 hours is not the most natural thing to do.”

Visit Sanya,China’s Skipper Seumas Kellock reports: “After the Le Mans start yesterday, we made great progress under our Code 2 Spinnaker pushing down the western edge of the Agulhas bank which is famed for its rough sea state, so we stayed well clear. Just as evening approached, the wind became a wee bit too much for our Code 2 and in the interest of saving our kit we changed from the Code 2 to the Code 3. For the first kite drop with a new team, it went amazingly well.”

With close racing at both the front and back of the fleet there is lots to keep a close eye on via the Race Viewer.

“The sky is grey, the sea is grey, the squalls are grey.” Reports Ha Long Bay, Viet Nam Skipper Josh Stickland, on the twelfth day of racing from Cape Town to Fremantle.IMAGE: 50 shades of grey…

THANKSGIVING CELEBRATED IN THE SOUTHERN OCEAN