Sanya Serenity Coast retains its lead during the fourth day of Race 6: The Wondrous Whitsundays Race as mixed conditions splits the fleet into two, as it progresses up the coast of Australia. Racing remains close though with 32 nautical miles separating the top eight positions.

Leading Skipper, Wendy Tuck, is heading up the western-most pack near the rhumb line and reports that: “The team are still working like troopers with reefs going in and out. We are in that holding pattern of waiting for the wind to come from behind again, but at the moment it’s still a bash upwind.

“That’s what is so delightful about sailing up the east coast of Australia is the weather thrown at you will normally include a bit of everything.”

Also in the pack to the west is second-placed Visit Seattle and fourth-placed Liverpool 2018, with both skippers reporting gusts of up to 40 knots leading to lots of sail changes. Further back in the western pack is Qingdao, currently in seventh position. 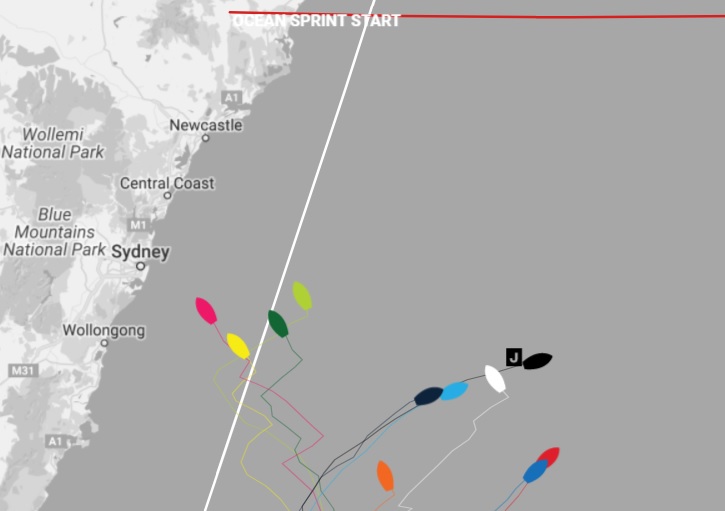 IMAGE: Latest positions of fleet (correct at time of writing).

Meanwhile, leading the pack to the east, but currently in third place on the leaderboard, Garmin Skipper, Gaëtan Thomas, is also reporting tough upwind conditions: “Here we go, back upwind! Climbing walls or using a trapeze to get in our bunks, sailing on angles towards our destination! Early this morning we had around 40 knots of wind in a choppy sea - changing the foresail was quite a sport, let's say we took a bath!”

Not far behind him in fifth place is Dare To Lead and Skipper Dale Smyth has explained that it has been another tough, tactical 24 hours with the team looking forward to some downwind sailing: “We are unfortunately fighting some strong current also as we head north but are where we are so need to make the most of it. We are expecting some southerlies tonight so that will be welcome to be running downwind for a while.”

Nasdaq is currently in sixth position, with Skipper Rob Graham looking forward to getting past the latitude of Sydney so that the team will be covering new water rather than retracing previous course, while GREAT Britain is not far behind (but in eighth position due to the split in the fleet).

Further back in the fleet, and furthest out east, is ninth-placed PSP Logistics and Skipper Matt Mitchell reports: “It's been another pretty frustrating 24 hours on the whole, with little glimmers of less frustration. Winds have been very up and down and rather disappointingly our progress against the fleet has been average at best.

“We are working hard to change things although I think it's more about waiting for an opportunity to present itself and sailing the boat well rather than try anything fancy at this stage.”

Unicef has reappeared from Stealth Mode in tenth position just behind PSP Logistics and the team has experienced light winds overnight, which has tested the helms’ sailing skills.

In eleventh position, HotelPlanner.com has been kept busy with a variety of wind conditions and Skipper Conall Morrison explains: “There has been much more action in the 24 hours since with lots of sails up and down and reefs in and out. We've had 0 knots up to 40 knots apparent and back down to about 7 knots at the moment.”

It looks like the changeable conditions are set to continue with Clipper Race Meteorologist, Simon Rowell, predicting a weather front to catch up with the fleet shortly with teams having to choose the best tactics to match the conditions.

Race Director, Mark Light, has provided an update that no penalty points were issued for equipment damage for Race 3, Race 4 or Race 5 and commended the Skippers and crew on the way that they are looking after the boats. There has also been a low level of costs associated with sail damage with only Visit Seattle receiving two penalty points for sail damage and repair after breaking through the £500 running total in Sydney.