The finish line for Race 7: The Forever Tropical Paradise Race to Sanya is just days away and some last-minute tactics are being deployed to keep Race Viewers sweating on who is going to win.

Race leader Qingdao, which is aiming for its first win of the 2017-18 race, opted to go into Stealth Mode yesterday and is now hiding its position and route from the rest of the fleet as it heads to the finish. Skipper Chris Kobusch explained: “Just over 400nm to go and we went into Stealth Mode. We thought we might just as well play it now or lose it once we are within 250nm range of Sanya.

“So far, we are not quite sure if it is giving us a tactical advantage or not... The next position report will tell.”

At 1159 UTC (midday today) Qingdao will reappear and only time will tell if it has managed to maintain its position. Until then, PSP Logistics currently tops the leaderboard, holding a significant lead over Sanya Serenity Coast, currently second with Dare To Lead third. 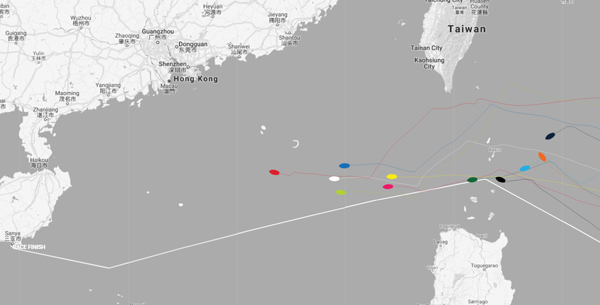 It has been a successful day for those further down the fleet with the results of the Elliot Brown Ocean Sprint confirmed. Nasdaq claimed the win with the fastest elapsed time, its first success in the Ocean Sprint, adding another three bonus points to the scoring gate point earned earlier in the race. Congratulations also go to GREAT Britain in second and Unicef in third, for the hard-earned bonus points.

With the conclusion of the Elliot Brown Ocean Sprint, the whole Clipper Race fleet has its sights firmly set on the finish line despite the fading north easterly winds, progress towards the Sanya finish line remains good.

Thoughts on board are focusing on the finish and the arrival into Sanya but PSP Logistics Skipper Matt Mitchell is aware that the race isn’t over till it’s actually over, saying: “We have a few more tactical challenges ahead of us with the wind due to ease right off over the next 24 hours, not long until we see who crosses the line first.”

The battle for a podium finish is heating up between Sanya Serenity Coast and Dare To Lead. With less than a nautical mile between them and positions switching since yesterday, it is going to be a tense finish.

Sanya Serenity Coast Skipper, Wendy Tuck, said: “Still chugging along (one step down from trucking along) under kite. Dare To Lead popped up on AIS last night, we sailed in company for a bit. We have under 600nm to go, being realistic our chances of catching PSP Logistics and Qingdao are small, so now we have a battle royal going on with Dare To Lead.”

With such close racing route planning to the finish is key. With the wind almost directly behind the yachts preventing them from sailing straight to Sanya, choosing when and which gybe angle to choose could be the difference between claiming a podium finish or not. Add to that a very busy stretch of sea for shipping, and it’s not going to be an easy final stretch.

Dale Smyth, Skipper of Dare To Lead, said: “Just trying to choose the most effective gybe angle as we have the wind directly towards Sanya at the moment. Looking forward to being there!”

Unicef remains in the mix, close on the stern of Dare To Lead in fourth, and Liverpool 2018 is not far off the pace in fifth.

Visit Seattle has made the turn west, round the top of the Philippines and is now headed direct to Sanya, Skipper Nikki Henderson reports: “Everyone is helming really well and improving watch by watch and on the plus side we are actually kind of going the right way! For now, Sanya doesn't feel far away at all now - we are all so excited to arrive.”

Reappearing from Stealth Mode at 0559 UTC this morning, Garmin held its position behind Visit Seattle and ahead of Nasdaq, currently seventh on the leaderboard.

For Nasdaq [eighth], HotelPlanner.com [Stealth Mode] and GREAT Britain [ninth] the Elliot Brown Ocean Sprint is now complete but despite the trial and tribulations their hard work paid off.

Nasdaq Skipper, Rob Graham, reports: “Last night's inter-watch activity was a hurried drop, pop, bag and re-hoist of the Code 1 after the tack snap shackle decided it was time for a rest. Certainly not ideal, especially during our Elliot Brown Ocean Sprint, but through quick reactions and great teamwork we didn’t lose too much time.”

Within radio distance of Nasdaq, HotelPlanner.com has also opted to go into Stealth Mode. Skipper Conall Morrison said: “Very soon we will be in Stealth Mode and it may be difficult for Nasdaq to find us under our cloak of invisibility. We have the Code 1 (lightweight spinnaker flying in a light-ish breeze and a gybe will be required soon, then after the Luzon Strait we will find ourselves in the South China Sea within 700 miles of Sanya.”

Simon Rowell, Clipper Race Meteorologist reports that the monsoon winds the Clipper Race fleet is currently experiencing will become more shifty and patchy over the next 24 hours, filling back in again in 36-48 hours and then strengthening for the final push into Sanya. He adds that there is still fog along the north side of the South China Sea, but nothing too organised as far as squall activity goes.

Keep up to date with how the latest weather conditions are affecting the fleet via the Clipper Race Viewer and hear more from the Skippers and crew on the Team Pages.

Race 7: The Forever Tropical Paradise Race will finish in Sanya Serenity Marina in Sanya, and the latest Estimated Arrival Times can be found on the Clipper Race website. Crew are excited to explore Sanya and all it has to offer during the stopover, and you can find out more about the stopover schedule here.

For the sixth day in a row Qingdao maintains its lead over the rest of its competitors, at the front of the Clipper Race fleet as the leading pack turns to the west for the final 700 nautical miles to Sanya. The teams…

The first teams have crossed the end gate of the Elliot Brown Ocean Sprint on Day 18 of Race 7:…

Happy Chinese New Year from the Clipper Race! As celebrations get underway on land, the Clipper Race fleet counts down the miles during the last stretch of Race 7: The Forever Tropical Paradise Race to Sanya, China. Teams have been getting into the spirit…