Race 7: The Forever Tropical Paradise Race to Sanya, China, will finally conclude today after more than three weeks racing but light winds are causing a feeling of insecurity across the fleet as teams push hard in a slow drag race to the finish line.

In the lead, PSP Logistics is around 40 nautical miles ahead of second placed Qingdao and is starting to believe its first win of the series could be a reality. Skipper Matt Mitchell reports: “The fickle wind has our speed very erratic and it's a wonder that we haven't lost more ground. We are just about clinging on in there and now, with 55 miles to go, each position update that we hold the guys behind off for solidifies our position.

“It's definitely not a dead cert just yet but we are slowly becoming hopeful. We just need to stick at it for a few more hours and more importantly, the wind needs to hold up for the next few hours!!”

Qingdao Skipper Chris Kobusch is one of a few Skippers looking over their shoulders, feeling the heat of the nearby competition. He says: “So close and yet so far. The wind is dying on us once again and we can see Dare To Lead and Unicef getting closer and closer.

“Sanya Serenity Coast has not shown up on the AIS yet, but we think they are close by too. it will be a drag race to the finish (a really slow one though...) Fingers crossed we can hold our position!”

Sanya Serenity Coast is just over 10nm behind Qingdao in third but the competition for that final podium spot is intense. Home team Skipper Wendy Tuck is in a drag race to the finish with Dare To Lead and Unicef, well aware of the need to increase her team’s current two nautical mile lead over fourth placed Dare To Lead if she wants to hold onto her position in the overall standings as 1 hour 24 minutes of redress is yet to be taken off her rival’s race time.

Dale Smyth, Skipper of Dare To Lead says: “It’s been a frustrating 24 hours of hoping that the wind will fill through with some significance but it not actually happening.

We are neck and neck with Unicef at the moment and frustratingly we were unable to match their boat speed in the early hours of the morning but we’re slowly managing to pull some back. It’s scary how much the fleet has compressed over the last 48 hours with all the back boats going faster than the front and definitely causing some stress! What looked like clear positions just a couple of days ago is definitely not the case anymore.” 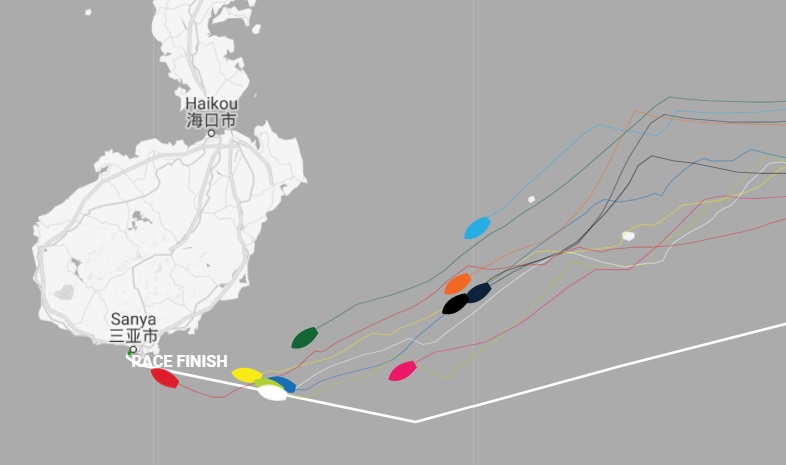 Never one to give up, sixth placed Visit Seattle also has some strong ambitions. Skipper Nikki Henderson explains: “We are looking forward not back and trying to catch the next boat ahead, Unicef. It's a stretch and would be pretty lucky if we did, but we will push to the end either way. It's fun to have a goal, a boat to chase, particularly after being so very, very far behind a week ago. 30nm seems like a short jog in comparison to the unachievable 180nm marathon that it was a week ago.”

Almost 50 nautical miles back, the second half of the fleet is also feeling the intensity of the competition, with important race points still to be won and lost.

Liverpool 2018 is seventh, after being caught up by Visit Seattle and is ruing a frustrating race of wind holes and some regrettable navigational decisions.

Garmin had a busy night trying to hold off its rivals. Skipper Gaëtan Thomas explains: “We gybed in the middle of the night to stay ahead of GREAT Britain (tenth) and Hotelplanner.com (ninth), just so to keep in a line. It was quite funny to see them gybing just after us, with one of them trying to stay on Stealth Mode with putting AIS on and off, but unfortunately for them it was quite easy to spot them on the radar. A bit of calculation and here we go, got your speed, your course, your range! Now it is a bit like match racing, when only the way we trim and drive will make the difference.”

It is shaping up to be an exciting finish with the teams at the front in the west with more fickle breeze compared to those to the east and north, who have a more consistent breeze. There is all to play for as the wind will become less steady with holes and shifts as the team approach the finish line.

Keep up to date with how the conditions affect the fleet on the approach into Sanya via the Clipper Race Viewer and hear more from the Skippers and crew on the Team Pages.

You can watch the team arrivals on our Facebook Live page. Start following now and you will be alerted once live footage is available.