It’s tight at the top on Day 8 of Race 7: The Forever Tropical Paradise Race, with less than two nautical miles separating the lead between the top three teams. Sanya Serenity Coast has been in the lead for much of the last 24 hours in the race to its home port, but is having to settle for second place as Nasdaq’s decision to stay west, close to the rhumb line, is currently paying off as it heads the fleet today, with Garmin close by in third.

The leading teams have started to cross the equator into the Northern Hemisphere with various King Neptune ceremonies playing out turning the novice Pollywogs into Honourable Shellbacks. In keeping with the race, Sanya Serenity Coast opted for a Chinese theme featuring a Chinese Sea Dragon and Magu (a Chinese Goddess).

Nasdaq, meanwhile, is looking to keep things more traditional and Skipper Rob Graham reports: “We gave King Neptune the traditional libation (Australia's finest liquid export this time) for allowing us through His realm, and invited him and his Court onboard later this evening to sit in judgement over our slimy Pollywogs for their landlubberly crimes. Given that most of the Clipper Race fleet are crossing today, Neptune is going to be busier than Santa Claus on Christmas Eve.”

Turning to the race, he went on to explain: “Nasdaq is sailing well - vying closely with Visit Seattle (hey Nikki!) and even closer with Garmin (salut GT!) in sight for the Scoring Gate, whilst most of the fleet continues on a more northerly course further to the east of us.”

Garmin has been holding its own equator crossing ceremony (featuring a ‘Neptune looking like Spiderman’ and a ‘crazy mermaid’) and Skipper Gaëtan Thomas believes it has brought the team some luck with the libations quickly followed by some breeze filling in. He reports: “We are in company of Nasdaq, which is sailing better than us in those light conditions and looking like it is going for the Scoring Gate. Visit Seattle isn't far away but the team is in Stealth Mode.” 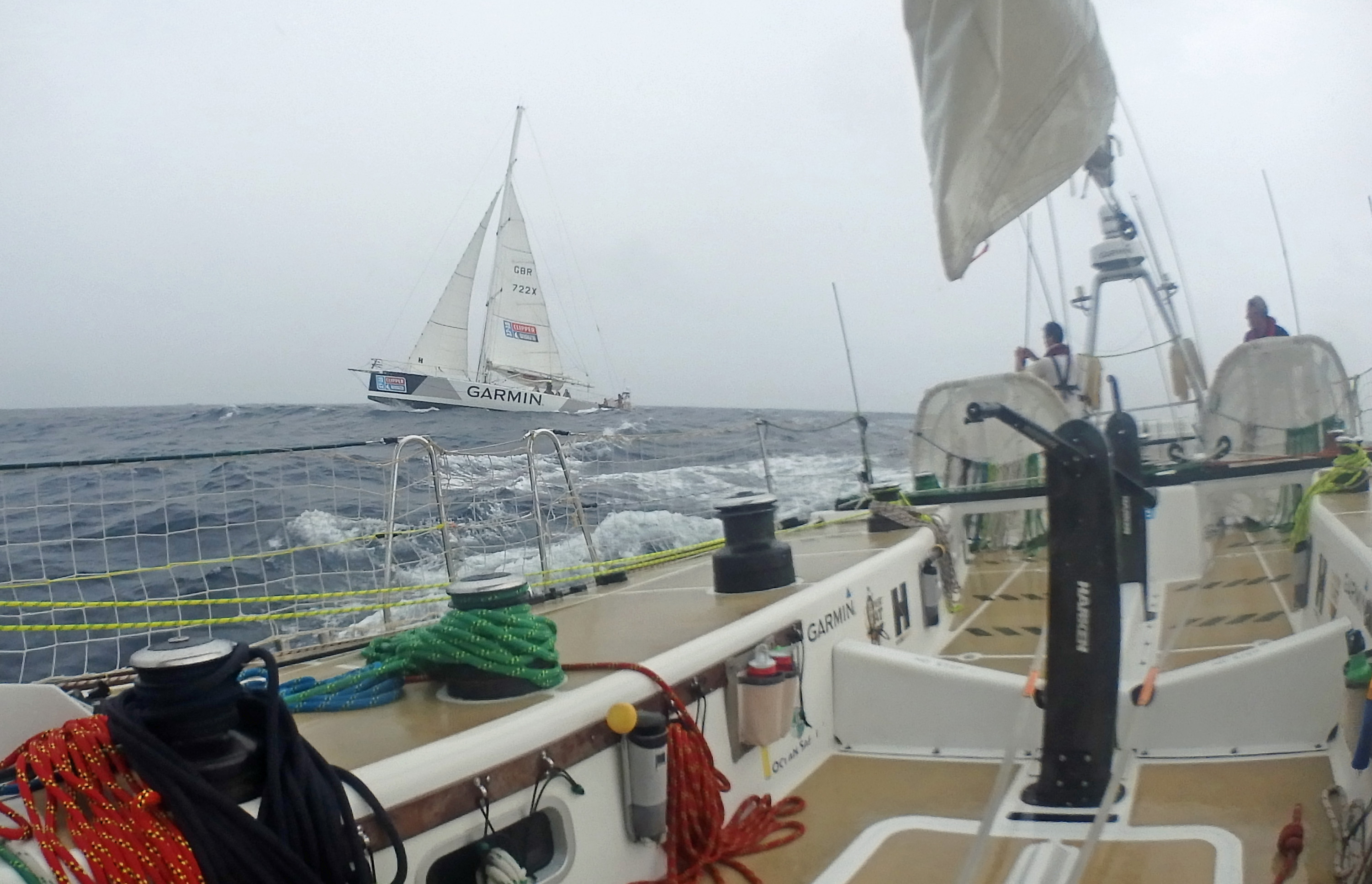 IMAGE: Garmin from on board Visit Seattle

Visit Seattle was in fourth place before being the first team to enter Stealth Mode and it appears that the proximity of the other teams is making it hard for the team to conceal its position with Skipper Nikki Henderson reporting: “Somehow, we let our guard down for a second when Skipper Rob from Nasdaq radioed us - despite our suits and our invisibility cloak - and we nearly gave the whole game away.”

The next tactical decision of the Scoring Gate is really testing the teams and Skipper Nikki explains: “Scoring Gate or no Scoring Gate - that is the question on everyone's mouths right now. We still aren't sure... Mother Nature isn't really being very generous for a Scoring Gate pursuit. But some extra points always feel good. So, we shall ‘um’ and ‘ah’ and then probably sit on the fence for a while longer.”

Other teams appear to have already made this decision with Dare To Lead, currently in fourth, way out east of it and PSP Logistics, in fifth, already to the north east of it.

Qingdao, which has received Scoring Gate points on each of the other races, also appears to be veering eastwards of it and is currently in sixth place. 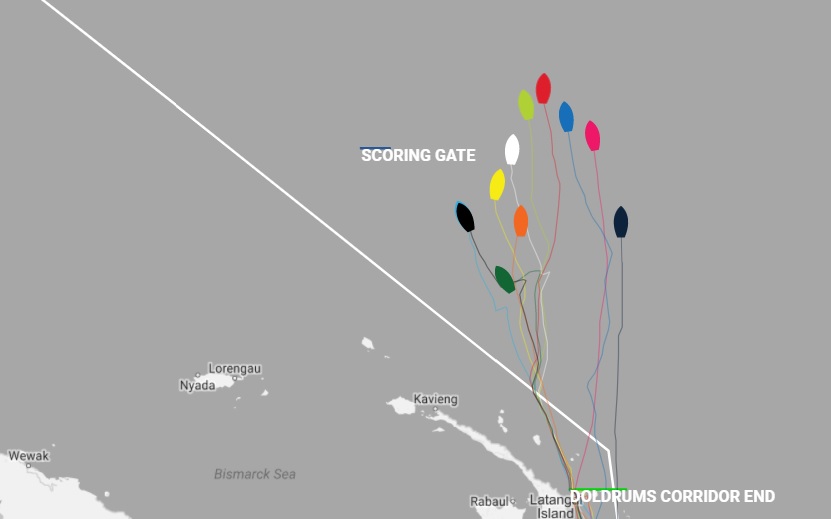 Unicef, in seventh, is to the north east of the Scoring Gate already and Skipper Bob Beggs reports that: “Conditions are good as we head north, however the weather forecasting tends to be very variable in accuracy in this part of the world. This enables race skippers to roll our dice to choose a route until we are far enough north to be positioned in the East and North-East trade winds.”

Liverpool 2018 has also gone east of the Scoring Gate and Skipper Lance Shepherd explains: “Having shot out past Papua New Guinea like a cork out of a bottle having made the decision to go north and get into the west going trades, only time will tell if this has worked out. But at the moment we’re doing ok and catching up after a disastrous Doldrums Corridor.”

Despite being further north, the team is in ninth place and remains behind HotelPlanner.com for the moment, which is south west of Liverpool 2018 and still has a Scoring Gate decision to make.

GREAT Britain makes up the fleet in tenth position and has called the day “Wondering Wednesday” as they watch the different tactics of the teams in front play out. Skipper David Hartshorn explains: “as we make good speed north and make gains on the boats in front, the big strategic question is: how to break through to those strong north easterly winds that will power us to Sanya.”

Clipper Race Meteorologist Simon Rowell reports that the forecast shows the low-pressure moving off west but quite erratically, although conditions are variable, but behind it the Trade Winds should be on the way!

Keep up to date with how the weather affects the fleet and its progress via the Clipper Race Viewer and hear more from the Skippers and crew on the Team Pages.

Race 7: The Forever Tropical Paradise Race will finish in Sanya Serenity Marina in Sanya, and the fleet is expected to arrive between 21 – 25 February after roughly 23-27 days at sea. Although the finish line is still almost 3000 nautical miles away, crews are excited to explore Sanya and all it has to offer during the stopover, and you can find out more here.

The Clipper Race fleet has begun to spread out after a full week of racing in Race 7: The Forever…

Race 7: The Forever Tropical Paradise Race has served up some of the most unexpected conditions of the 2017-18 edition so far and unforecasted weather conditions have continued to challenge the fleet during the sixth day of racing.After PSP Logistics took first position yesterday, Sanya…

Tactical decisions are made as the typical Doldrums conditions of light airs and rain squalls return. On the fifth day…

And they’re off! Much to the delight of the majority of Clipper Race Skippers and their crews, the fourth day…