Tactical decisions are made as the typical Doldrums conditions of light airs and rain squalls return. On the fifth day of racing in Race 7: The Forever Tropical Paradise Race it is PSP Logistics which, for the first time this race, heads up the leading pack after overtaking Sanya Serenity Coast now in second and Visit Seattle third.

Skipper of first placed PSP Logistics, Matt Mitchell, reports: “We are well and truly in the doldrums now as we are utilising our motoring option in order to cover the worst of the light airs.” 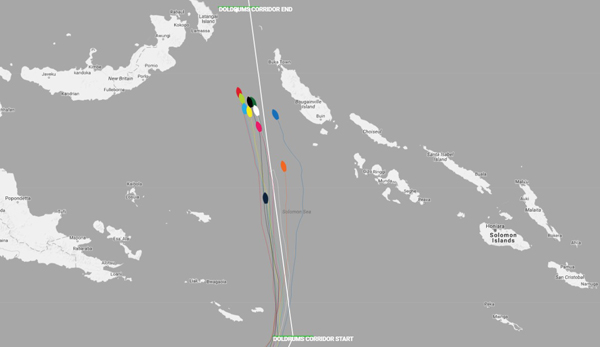 With strong favourable winds yesterday, the fleet faced a difficult decision as to when or even if to utilise the Doldrums Corridor Rule, which allows all yachts to motor-sail for a maximum of 4° of latitude or an elapsed time of 36 hours. Sanya Serenity Coast Skipper, Wendy Tuck, explains: “We scratched heads, we ran the weather routing, we talked, we scratched heads some more, then decided yes it would be better to motor. It is a gamble, as we only motor at just under 7 knots, so if the breeze stays in we are on a looser.

“So, with baited breath I sent in the declaration saying we would commence motoring in three hours, and would you believe it, last night the breeze completely died out 2 and 3/4 hours later, so, so far it has been the correct decision.”

The majority of the leading pack also came to the same conclusion but for fourth placed Garmin, Skipper Gaetan Thomas is keeping his cards close to his chest: “Are we motoring? I guess this is what you guys are thinking the answer in a few days.”

Both Nasdaq, currently fifth and Qingdao seventh moved up a place on the leaderboard before turning on their motors and are utilising this section of the race to get some rest and make preparations for the rest of the race to Sanya.

Though it is not all plain sailing in the doldrums as the teams have been experiencing lots of squally activity coinciding with the light patchy airs keeping the crews on their toes. Eighth placed Unicef Skipper Bob Beggs said: “As I type another squall is upon us turning the chart table on its side, the team are scrambling on deck to get the Yankee 1 down. We use our Garmin Radar to good effect, warning us of the approach of rain squalls shown in vivid red on the plotter.”

Currently in sixth place, Dare To Lead halted its progress to aid Liverpool 2018 now in ninth with the transfer of essential parts for its Watermaker. The transfer of parts and spare water was successfully completed at first light with both teams resuming racing shortly after. Liverpool 2018 Skipper Lance Shepherd explained: “Myself and Dale came up with the plan of a towed dingy transfer, as it sounds - towing a dingy behind us about 150 yards, Dale dropping the replacement watermaker and four drums of spare water in the dingy, we then retrieve the dingy back to our yacht and install the new machine.

“We did of course pass back the empty drums and a package of goodies by way of thanks to Dale and his team for all their efforts in helping us out, all in all a good job well done...Thanks Dale!” 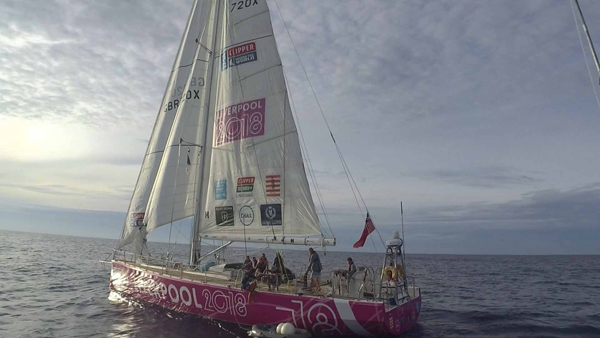 IMAGE: Successful transfer of essential parts from Dare to Lead to Liverpool 2018

Hotelplanner.com remains in tenth place and GREAT Britain in eleventh and though trailing the leading pack, both teams have worked hard to reduce the deficit and have entered the Doldrums Corridor. Finally benefitting from stronger winds both teams are under sail making good speeds on a northerly course and so have held off from committing to motoring.

GREAT Britain Skipper David Hartshorn said: “At last we have some wind, a nice strong breeze, averaging about 26kts of it, from the South West, so we are on a port tack, reaching, life back on the tilt. Constantly hitting speeds of over 10 knots and at times achieving 14kts, which is very much welcome after the light and challenging airs leading up to the Solomon Sea.”

Adding: “Although still chasing the rest of the fleet, the fact we achieved better distance made good than all the other boats, beside HotelPlanner.com, and reduced our distance to the front boat by 30nm, in the last six hourly scheduled position report, is good for moral with the GREAT Team.”

Simon Rowell, Clipper Race Meteorologist reports that there’s a North Pacific low to the North East of the fleet which looks like it will make progress North of the Solomon Sea quite hard work. He adds that the squalls will continue but the fleet should see a drop in frequency from today onwards.

Monitor whether the team’s tactics have paid off by tracking the fleets progress via the Clipper Race Viewer and hear more from the Skippers and crew on the Team Pages.

Race 7: The Forever Tropical Paradise Race will finish in Sanya Serenity Marina in Sanya, and the fleet is expected to arrive between 21 – 25 February after roughly 23-27 days at sea. Although the finish line is still almost 4000 nautical miles away, crews are excited to explore Sanya and all it has to offer during the stopover, and you can find out more here.