Half the Clipper Race fleet has begun the Elliot Brown Ocean Sprint for Race 8: The Sailing City Qingdao Cup, though all eleven teams are having to deal with the arrival of strong north-easterlies.

The fleet has been buffeted over the last day, with Clipper Race Meteorologist Simon Rowell reporting the main pulse of the incoming northeast is just upwind of the leading pack, with the gusts estimated to peak at 50 knots over the next 24 hours.

PSP Logistics, who has now led for three of the four days since leaving Sanya, was the first to begin the Elliot Brown Ocean Sprint, and Skipper Matt Mitchell admits the current upwind conditions are ‘uncomfortable’, especially in light of the constant fishing activity. He says: “We've also just passed through a field of fishing nets, hooking one on our rudder and managing to avoid the others. I'm very much hoping that we don't come across any during the night when the wind is strong.”

Just 15 nautical miles behind is Visit Seattle, having jumped from sixth to second in the rankings in the last 24 hours. The position change didn’t come easy, as Skipper Nikki Henderson reports: “The weather is getting tougher and tougher with gruelling sail changes and soaking wet and cold conditions.

“The reality is that it is going to continue for some days. Absolutely everyone has stuck their neck out for each other. I wish all their loved ones could see how hard each and every one of them is working for each other. This sailing malarkey is hard work - but such good fun!”

With Sanya Serenity Coast, fourth, persisting with a southerly route, Liverpool 2018 has jumped into third place. With the team adjusting to life at an angle, the team’s Skipper Lance Shepherd comments: “We have just started the Elliot Brown Ocean Sprint and are bobbing on at a steady 8-9 knots. The sun is out and it’s not started getting too cold as yet but I’m sure it will get colder everyday once we start heading north.”

Less than 10 nautical miles currently separates fifth placed GREAT Britain from Unicef in sixth. Unicef Skipper Bob Beggs, who raced this stretch of water as the Skipper of Qingdao in the Clipper 2015-16 Race, is preparing for tough times ahead, saying: “The weather so far has been kind. We haven't had any strong winds and a pretty flat sea with an occasional slam since leaving Sanya.

“We have currently 940 miles as the crow flies to the finish line but we still have to round Taiwan and beat north so we will probably sail 2000 nautical miles through the water to get there. We are now prepared for the gale force winds expected soon.”

After pausing to transfer equipment to repair its water maker, Qingdao has jumped three places overnight to be seventh. Skipper Chris Kobusch explains: “Yesterday we decided to tack and head north again to get a better angle for the predicted wind shift. Once the wind backed, we tacked again and have now been on a port tack for about 18 hours. It looks like the wind will pick up and shift east again over the next 24 hours and we will be beating into it for the duration of the Elliot Brown Ocean Sprint.”

HotelPlanner.com is less than a nautical mile further astern of Qingdao in eighth place, whilst little is separating Garmin, Nasdaq and Dare To Lead, in ninth, tenth and eleventh respectively. All three teams are due to begin their Elliot Brown Ocean Sprints in the coming hours, and Nasdaq Skipper Rob Graham comments: “The wind has increased, our sail plan has decreased, but the only significant change has been that an overcast sky has lowered the sweltering temperature to something quite pleasant.” 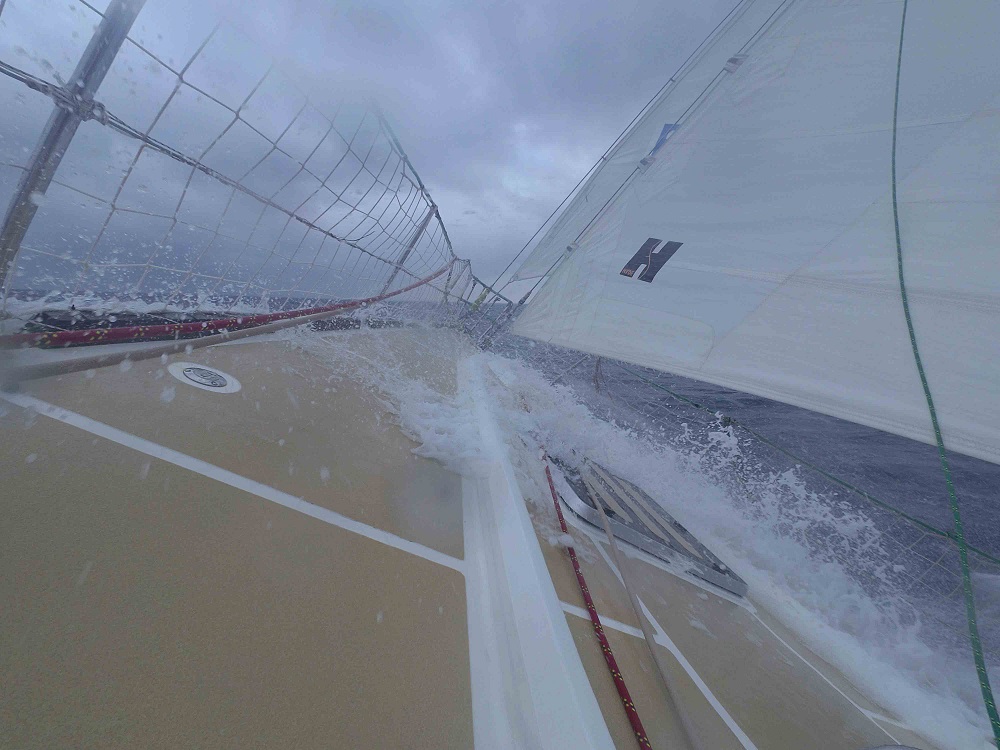 Today, in support of International Women’s Day, we’re celebrating our fearless females who have come from all walks of life in order to take on one of the toughest endurance races on the planet. Committed to bringing more women into ocean racing, the Clipper Race is full of incredible, inspirational stories of positive female role models. Click here to read more.