The stronger winds and big surfs that the Pacific Ocean is renowned for have finally arrived. The Clipper Race teams recorded some of their best speeds towards Seattle over the last day and night and are now preparing for their first taste of a North Pacific low-pressure system.

The two leading teams from yesterday are pursuing very different tactics with PSP Logistics maintaining first position having stayed furthest north, whilst Unicef has dropped down the leaderboard having opted for the most southerly route of the teams, away from the rhumb line.

PSP Logistics Skipper Matt Mitchell says: “It's been a fast 24 hours and as the sea state is slowly starting to build, the sign of things to come is becoming apparent as we are starting to get some good surfs off of some of the waves.”

As the winds continue to build, the Skippers and crew are also preparing to batten down the hatches in expectation of the low-pressure system that is coming their way from Japan in a north easterly direction.

HotelPlanner.com Skipper Conall Morrison reports: “So, here we are, the sky’s getting greyer, the temperature dropping, the barometer falling and the familiar sound of water rushing past the hull and cavitating off the rudders as the wind is filling in.

“We have stowed down below as best we can and are getting set for dropping down a gear or two as the front passes. Winds look favourable in the week's forecast ahead and crew are chomping at the bit to get involved.”

On the racing front, Sanya Serenity Coast has moved up into second place, with a cluster of Clipper Race yachts close behind, Skipper Wendy Tuck explains: “There are quite a few of us on AIS at the moment and it looks like the race is well and truly on for the Scoring Gate. PSP Logistics is just inching away from us and we have tried everything to rein the team in to no avail, but we seem to be holding our own amongst the others we can see.” 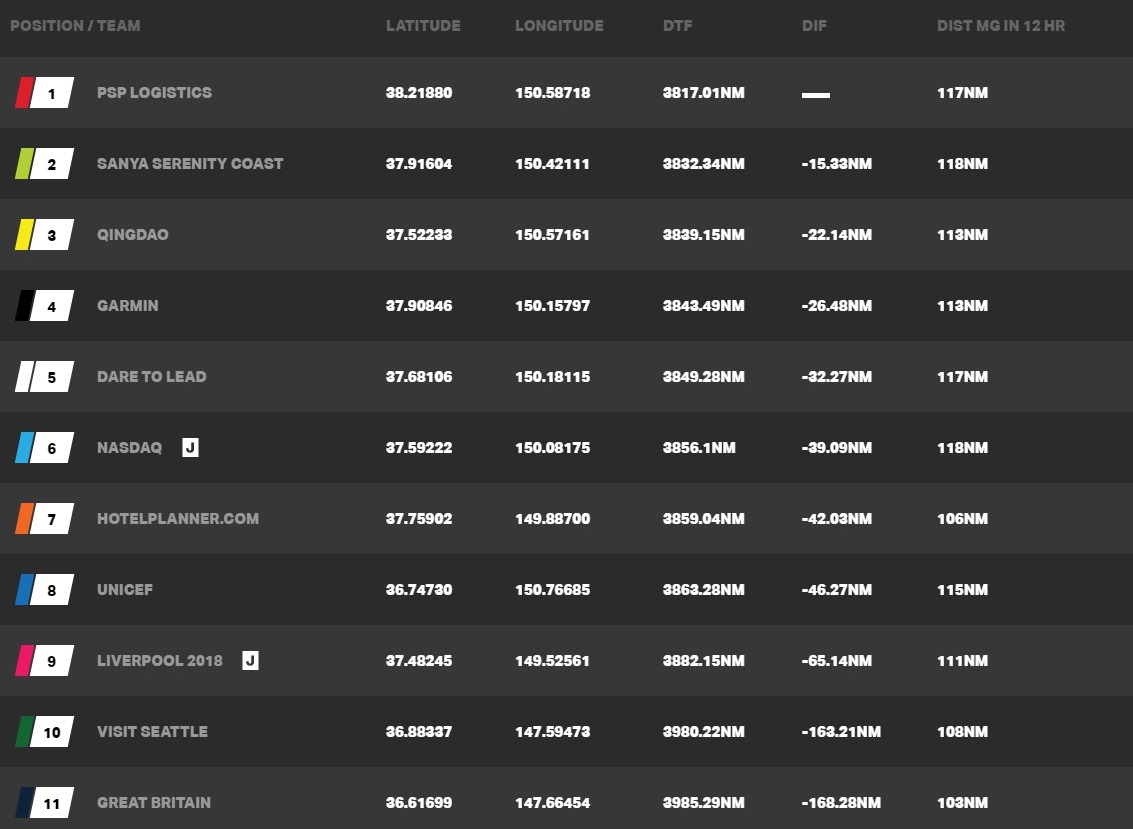 Currently in third Qingdao has also secured the most Scoring Gate points to date and Skipper Chris Kobusch is focussed on the next opportunity to secure bonus points saying: “We are now less than 500nm away from the Scoring Gate and, as it looks, half the fleet is aiming at it. With everyone being so close together this will be one of the toughest sprints to the Scoring Gate since Liverpool.”

The teams behind are waiting for the winds to fill in but have still been making good progress, with Liverpool 2018 Skipper Lance Shepherd, in ninth place and over 60 nautical miles (nm) behind the lead, reporting: “We did 248 miles in the last 24 hours and we’re currently waiting for the wind shift and for it to increase which should speed up our progress albeit a little bumpier.”

Further back, Visit Seattle is battling it out for tenth position with GREAT Britain and Skipper Nikki Henderson remains philosophical, saying: “We are doing the best with the wind we have. Unfortunately, being 150nm behind the fleet means we tend to have different weather and if the wind blows less for us than them there is just nothing we can do except sail as well as we can (hence 'sail with style'), while we watch them increase their lead on us and sail into the sunrise.”

The expected front should shake things up a bit today with winds gusting up to 50 knots with localised squalls bringing sudden increases and occasional large shifts.

The tenth day of the Race to the Emerald City saw the fleet compress yet again in what felt like the third on-the-water race restart for the eleven Skippers and their teams as they converged on the final mandatory gate before Seattle, Gate Haller.This milestone…