The Clipper Race fleet remains compressed as the teams attempt to position themselves ahead of another ridge of high-pressure. The challenging sea state has eased as the teams choose their routes to Virtual Mark ‘Haller’ ahead of the North Pacific Ocean.

Skipper Nikki Henderson whose team Visit Seattle continues to lead today, after opting to take the most southerly route in the fleet, says: “Things are very cheerful on board Visit Seattle right now. It's an absolutely gorgeous day - the sky looks just like the Simpsons. We have just spent a few hours riding the Kuroshio which was great fun... 10-11 knots upwind - and just fallen off the other side. It makes me feel like we are back home in the tides in the Solent ... it feels good to be pointing east.

She adds: “After the initial shock of life on a lean, we are all acclimatising. The first night is always hard - watches are short-handed with people off with green fever - but with dawn came a new day.”

The top nine teams are within 20 nautical miles of the leader, with those to the south currently ahead of those to the north, but this could all change. Sanya Serenity Coast Skipper Wendy Tuck, currently in second place, reports: “We are now just trying to get ahead of a ridge of high pressure which, you guessed it, is a wind hole. Will the fleet compress again here, will this be our third race start in the Race to the Emerald City?”

Third-placed Liverpool 2018, which played its Joker Card on Race 9, is within sight of Sanya Serenity Coast and Skipper Lance Shepherd is in good spirits saying: “Today we have a nice sunny day, a little cloud but generally nice and warm with a little spray coming over the decks now and again. We have made reasonable ground in the last 24 hours and managed quite a few headsail changes too.”

Fourth-placed Dare To Lead Skipper Dale Smyth has had a tough 24 hours, but has finally completed repairs to the boat’s mast track, and explains: “This job would require concentration in a workshop but half way up a mast, in the worst sea state we have seen this leg, it took exactly eight hours... Suffice to say I'm feeling a bit wiped out today but we are still managing to keep the boat moving in the right direction.”

He adds: “I have the most amazing crew who just kept helping me until we were complete with these repairs and tea kept coming out of the galley.”

Garmin and Nasdaq have climbed a few positions to be in fifth and sixth respectively, and the latter’s Skipper Rob Graham reports: “Nasdaq is speeding Seattle-wards through a rather lumpy little patch of the North Pacific, under unexpectedly blue skies and with a warm wind from an increasingly favourable direction.

“Overnight we crossed paths with HotelPlanner.com [ninth] and Qingdao [seventh] who were heading north-east as we went south-east, and through today we've caught AIS glimpses of Visit Seattle, Sanya Serenity Coast and Garmin. It's interesting to see how those choices work out as we all pick a route towards Haller Gate.”

Whilst HotelPlanner.com has slipped a few positions since yesterday, the racing remains close and Skipper Conall Morrison explains: “The current plan is to sail north of a forming ridge of high pressure before it fills in and to have the wind behind us as we cross the gate. Once past the gate it will feel like we are in the Pacific properly.” 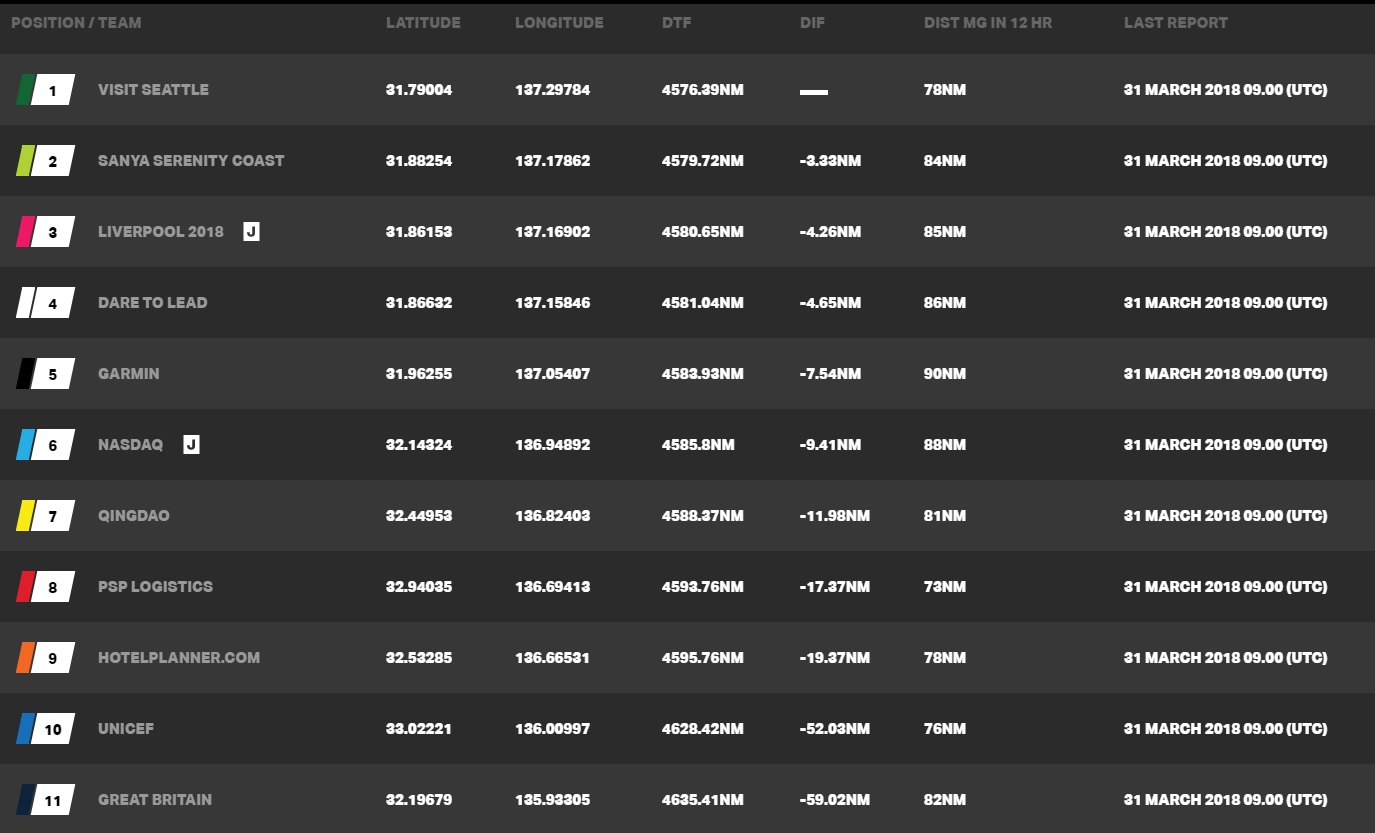 The northerly route has been favoured also by PSP Logistics and Unicef, with both teams hoping that this tactic to get downwind sailing sooner rather than later will pay off.

Sticking close to the rhumb line is GREAT Britain in eleventh place. Skipper David Hartshorn is preparing for the reduced winds, saying: “We are expecting the wind to continue to veer and get lighter as a ridge of high pressure develops across our track. There is some mixed response to the lightening winds amongst the watches, Red, White and Blue. Relief for some who are still trying to shake off the “green monster” and an acceptance that the mixed weather of the transition over the next couple of days will bring additional sail changes and evolutions.”

After the light and variable winds of the next 24 hours, Clipper Race Meteorologist Simon Rowell is forecasting decent south-westerlies for two or three days, which should help the fleet onwards to Seattle.