Speed records for Race 9 tumbled for a second successive day as the Clipper Race fleet made fantastic progress over the last 24 hours in the Race to the Emerald City. With the next course target being the Scoring Gate, less than 200 nautical miles away, each of the eleven teams made well in excess of 100nm in the last 12 hours towards their destination, Seattle.

After a challenging weather front hit the fleet, as expected, with a tricky wind shift. PSP Logistics retains the lead having opted for the most northerly route and Skipper Matt Mitchell reports: “We've been going really well all night and day with some big surfing giving us great distance. The crew are relishing the first tough conditions that we've had this race and although looking forward to it easing a bit, there are smiles all round.” 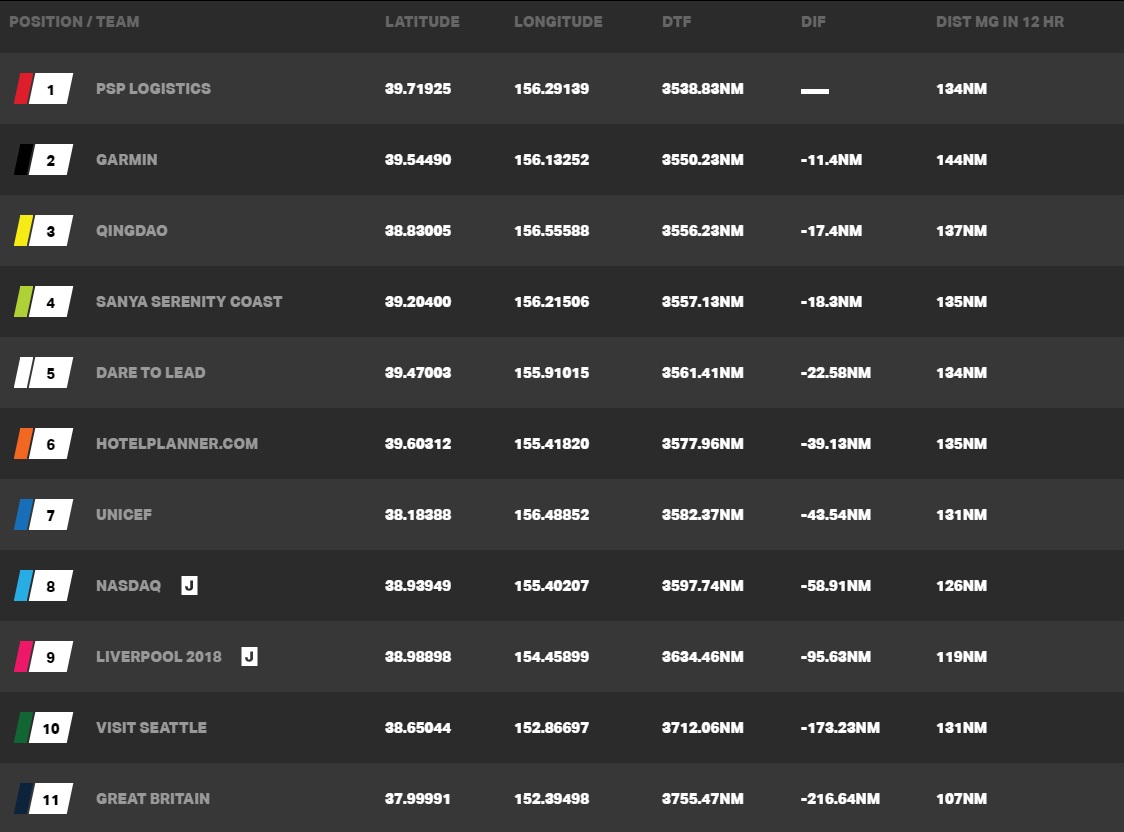 IMAGE: Fleet Leaderboard as of 0900 UTC.

The conditions have certainly tested the Skippers and crew who have coped well. Garmin has moved up the leaderboard just over 10nm behind PSP Logistics and Skipper Gaëtan Thomas reports: “We wanted wind and we definitely have it! Blowing between 45 and 55 knots since this morning. Last night we had the front passing over us with its 90 degrees wind shift.

“We are constantly surfing around 22-26 knots and the sea state is getting bigger and bigger so I'm really busy on deck.”

Dare To Lead is also close to the front two teams and Skipper Dale Smyth has been enjoying the fast speeds, saying: “We now feel like we are making progress although it is very cold and soaking wet on deck. Our new Leggers’ eyes were getting wider and wider last night with the spinnaker up and I think this is a case of them finally realising what they signed up for. All well on the rocket ship Dare To Lead.”

IMAGE: Fleet positions as of 0900 UTC

Further south, Qingdao keeps hold of third position. Despite ripping its heavyweight spinnaker, this can be repaired and Skipper Chris Kobush remains focused on gaining some bonus points, saying: “Hopefully the rest of the fleet didn't gain too much on us. With less than 200nm to the Scoring Gate it will become harder and harder to make up lost miles.”

Even further south is Unicef and Skipper Bob Beggs reports: “The mighty Pacific Ocean is now delivering what most of the crew were expecting or signed up for. The phrase ’you should be careful what you wish for’ springs to mind. So, we are going like a steam train on the downhill section with whoops and cheers emanating from the helms as personal bests keep tumbling.”

Further back in the fleet, Nasdaq has slipped to eighth position but all of the crew are getting to helm in the challenging conditions and plummeting temperatures, which have led to more Henri Lloyd drysuits appearing on deck. Skipper Rob Graham explains: “The crew are split between Reds (foulies) and Yellows (drysuits) so I'm back to playing 'Connect 4' as they line up on deck. It's great fun - I even scored a yellow 'Connect 5' this morning with Port Watch.”

Liverpool 2018 remains in ninth position and Visit Seattle has pulled away from GREAT Britain to be firmly in tenth position but the teams at the back continue to make good speed with GREAT Britain Skipper David Hartshorn reporting: “Life is back on the tilt, with the sound of water rushing across the deck and the occasional whoosh created by the cavitating effect, as the GREAT Britain boat still reaches speeds of 13kts + SOG (Speed Over Ground).

“The crew move spider-like, grabbing onto hand holds, that if the boat wasn't heeled over you wouldn't know were there or even designed for such use. So even though this is a relatively small taster of the North Pacific, after the last 12 days it is the beginning of the challenge quite a few of the GREAT Britain crew signed up for.”

As the low-pressure system moves away from the fleet the next little high-pressure cell, effectively a ridge between this low and the next, should follow the teams and they should see a gradual backing and easing of the wind today.

Race 9: Race to the Emerald City will finish at Bell Harbor Marina, in Seattle, with the teams expected to arrive between 19 – 21 April 2018.

The stronger winds and big surfs that the Pacific Ocean is renowned for have finally arrived. The Clipper Race teams…

A mixed bag of weather conditions has kept each of the eleven Clipper Race teams busy through the night, and any big tactical moves at bay, as a ridge of high pressure brought any attempts to take advantage of the open Pacific ‘playground’ to a…