In early June 2012, Kristi Wilson was running near her New Jersey home in the USA. Nothing seemed out of the ordinary but little did she know that this run, on this particular day, was to end up taking her on a journey tens of thousands of miles around the world – multiple times.

Kristi’s daily run took her past Liberty Landing marina and that’s where she first saw the brightly coloured Clipper 2011-12 Race fleet, with lots of crew all dressed in their team kit. Kristi had little previous sailing experience but, intrigued, she went for a closer look and got talking to one of our crew team. A short while later she had signed up for a crew presentation. Before the boats departed Kristi knew she wanted to race around the world in the next Clipper Race.

Kristi explains: “When I signed up for the Clipper Race, my main intention was to go explore the world in a unique way. Although my previous career was successful, I had lost my passion for what I was doing and knew it would be hard for me to return to the same job.”

Kristi quit her job in Medical Imaging Equipment Sales to take part in the full circumnavigation of the Clipper 2013-14 Race. She joined the team aboard Derry~Londonderry~Doire and volunteered to be the on board media crew member. Kristi was even selected to be one of our ’50:50’ poster crew for the Clipper Race marketing campaign. Following her circumnavigation Kristi used her new skills and experiences to successfully pursue a job managing Team Alvimedica’s social media during its recent Volvo Ocean Race campaign. 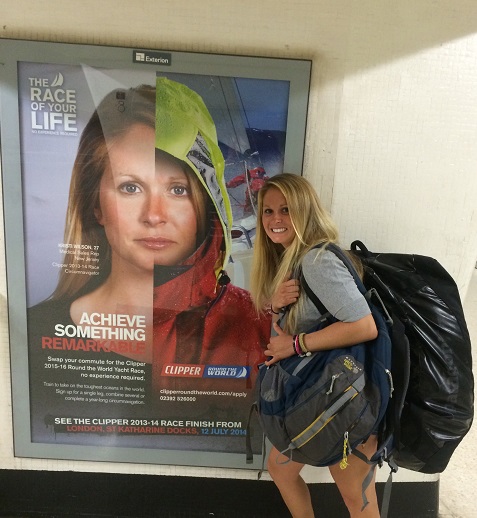 “Although I wasn’t planning to start a new career, I saw the Clipper Race as a break from my day-to-day reality. But I knew that I wanted to make a career change post-race, although I had no idea what that would mean,” adds Kristi.

“I fell in love with sailing, especially offshore racing during the Clipper Race, and thought there was no reason why I shouldn’t try to make a career out of it. The lifestyle and close-knit community of sailing was truly inspiring and I wasn’t interested in going back to the corporate world where I came from before the race.

Kristi’s initial role for the Volvo Ocean Race was to manage Team Alvimedica’s social media channels, help launch the team’s new website, coordinate the content calendar for the weeks leading up to the start, and assist in ‘behind-the-scenes’ content generation. However, following the race start in Alicante, Kristi was offered a full-time position with the team as their Digital Content Coordinator.

Three years on from that fateful run, Kristi is returning to the Clipper Race but this time as a professional onboard TV camera operator for our Official Host Broadcaster. Kristi will be filming on most of the race legs, this time moving around the different teams to capture the action and personal experiences of crew as the race unfolds over the next year.

“Arriving in London to be involved in my third round-the-world race in as many years is incredible,” states Kristi. “Standing here in St Katharine Docks in the Clipper Race Village has brought back a flood of memories. It’s hard to imagine that just two years ago I was in the same shoes as the crew here, filled with excitement and wonder at the prospect of sailing around the world.”

So what advice would she give to this race crew based on her previous experiences? Kristi responds: “Don’t get hung up on the small things that may seem big at the time. Learn to let them go. Tomorrow when you come on deck to another amazing sunrise or end a watch with hundreds of dolphins chasing the wake of your boat, you’ll realise how lucky you are and those things won’t feel so significant anymore.

“The best part of the race is the memories of the people I shared the experience with, not which race we won or lost (with the exception of winning Sydney-Hobart of course!). My advice is to enjoy the experience, take the time to learn about those you are sailing with and those sailing on other crews.”

However, joining the tenth edition of the Clipper Race is different for Kristi: “This time I won’t be racing around the world to take time off from work or tackle a personal adventure. This time my job is to capture the stories of crew. I’ll see their reactions as they face King Neptune when crossing the equator for the first time, tackle the swells of the Southern Ocean and survive the heat of the doldrums. Seeing as I enjoy sailing so much, it will be difficult for me not to jump in to hoist a sail or take the helm while flying a spinnaker, instead my hands will remain steady on the camera.

“I am really looking forward to watching the crews evolve from the beginning of the race to the finish. The most exciting part is that I will get to jump from boat to boat throughout the race – witnessing different leadership styles from the skippers and observing different team dynamics. For me it’s important that I will be able to relate to the crew since I’ve experienced the race and I am sure they will all be teaching me a thing or two along the way.”

Kristi will be aboard LMAX Exchange for the first race from London to Rio de Janeiro, which departs St Katharine Docks on Sunday 30 August. You can follow her journey on Twitter - @kristibwilson and Instagram - @Kristi360.

As the international Clipper Race crews prepare for the race of their lives, they are also fundraising and supporting the…

Anu Aggarwal is of our many crew who had never sailed before signing up to join the Clipper Race. Now the 37-year-old Business Analyst has completed all of her training, crewed on the fleet delivery to London, and will set sail for Rio de Janeiro…

As we count down to Race Start, the long wait is over for our five Derry~Londonderry~Doire bursary candidates,…

Young South Africans take to the water for fleet delivery