On the penultimate day of Training Week, the eleven strong fleet and its crew practiced a Le Mans start. This type of race start is used when the yachts are out at sea and is self managed by the Skippers rather than Clipper Race Officials overseeing a standard start line.

So, what is a Le Mans Start? Essentially, all eleven of the fleet are lined up under engine, with their mainsails raised and their headsails ready to go. Upon Race Start, the fleet can proceed forward raising their headsails, making for a rolling start.

A Le Mans start is certainly an impressive sight, with the whole fleet all raising their sails at the same time, and the sound of 22 headsails being hoisted and many winches spinning filling the air.

The aim of all Skippers is to ensure that the Le Mans start is as fair as practically possible. The procedure does not work if any of the Skippers try to jump the gun or gain an unfair advantage during the start sequence. If the Lead Skipper suspects that an unfair advantage is being obtained by any yacht, they will halt the start process and restart the sequence. 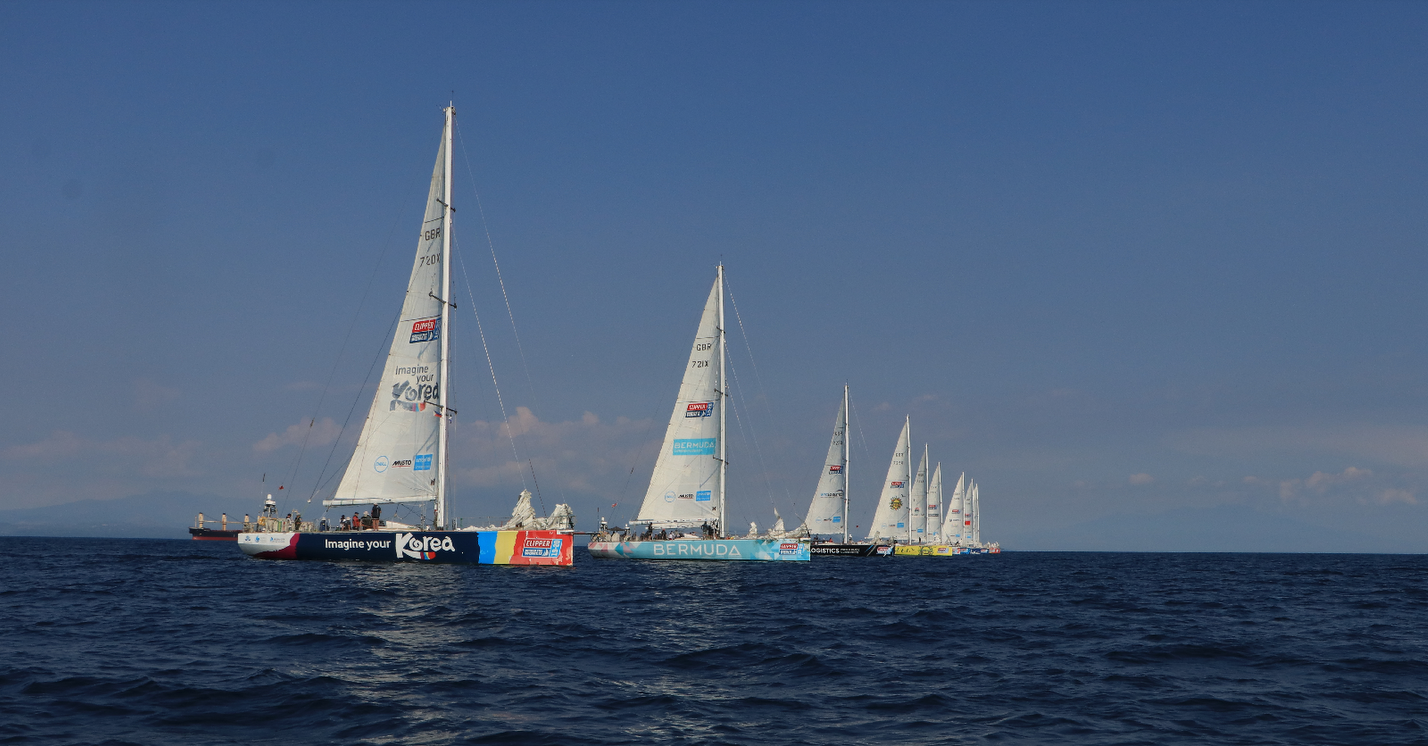 The fleet lined up ready for a Le Mans start

How a Le Mans start is run:

Prior to the ten-minute signal, all yachts should have their mainsails hoisted, the headsails hanked on, with halyards and sheets attached, but not hoisted.

All yachts must start with the same sized headsails hanked on and this will be decided and communicated in advance to the fleet by the Lead Skipper.

All yachts motor slowly (with the speed set by lead Skipper), approximately two to three boat-lengths apart in a line abreast on a pre-arranged heading. This heading is usually towards the finish.

Once the fleet is in a line abreast, the Lead Skipper signals the ten-minute gun via VHF. Engines shall be used to ensure that the yachts are lined up accordingly.

At the four-minute signal, all Race Crew shall be aft of the forward grinder.

At the one-minute signal, engines are to be turned off.

Mainsails are trimmed to ensure the fleet stays in line. If the fleet drifts out of line, the Lead Skipper can stop the sequence and start the process again.

At the start gun, the Race Crew can move forward on deck and the headsails can be hoisted.

All yachts must hold the agreed course and separation for the first ten minutes after the start gun. 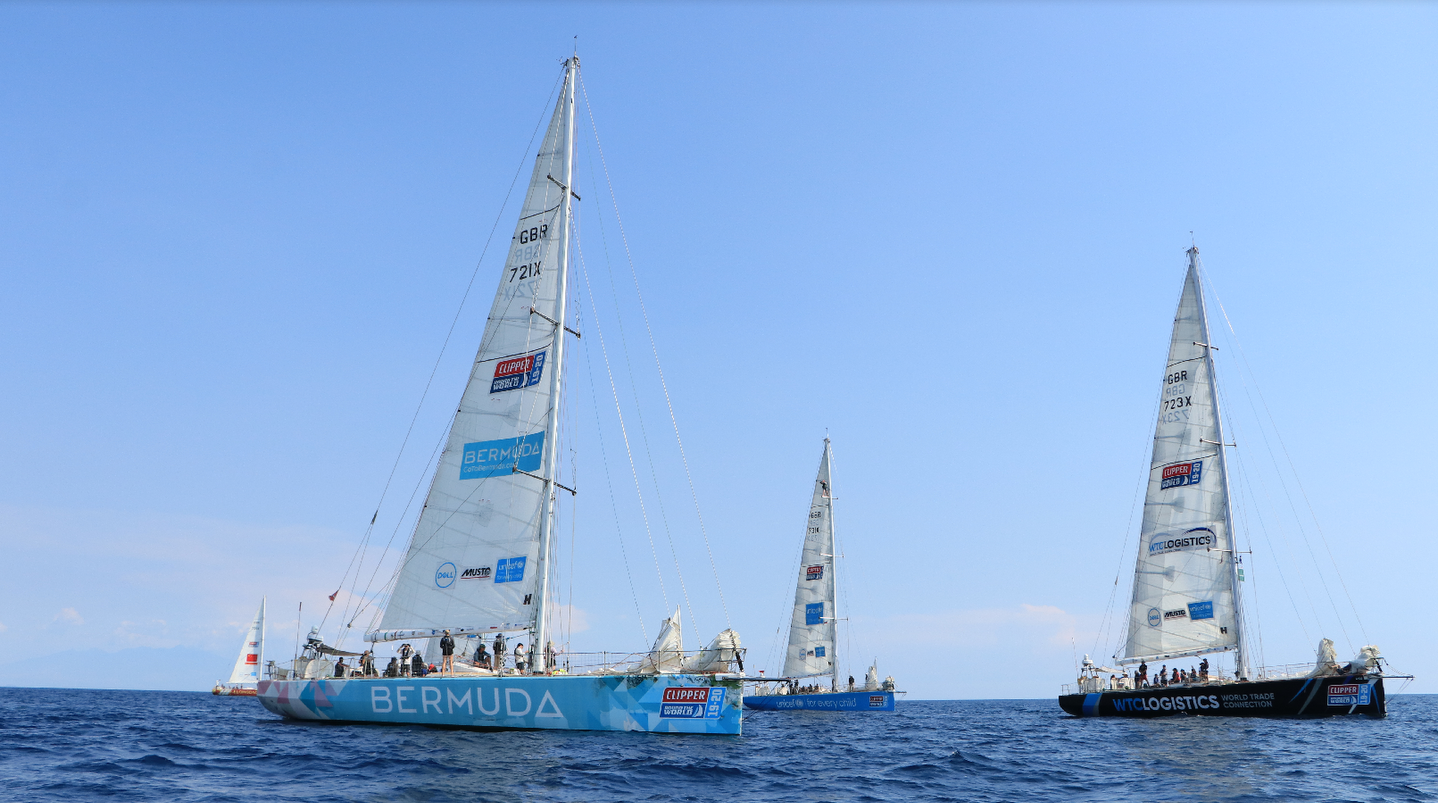 GoToBermuda, Unicef and WTC Logistics preparing to line up

No spinnakers may be used for the first ten minutes after the start gun.

No luffing (when a sailing vessel is steered towards the wind) for the first ten minutes after the start gun.

No course changes within the first ten minutes of the start gun. As an exception, yachts can tack away from the line-up but only in the event of an emergency or technical issue arising and not as a tactical decision. Once clear, they must sail behind the fleet. Any yacht that does this has no rights of way over those yachts that have not tacked during the ten minutes after the start gun. 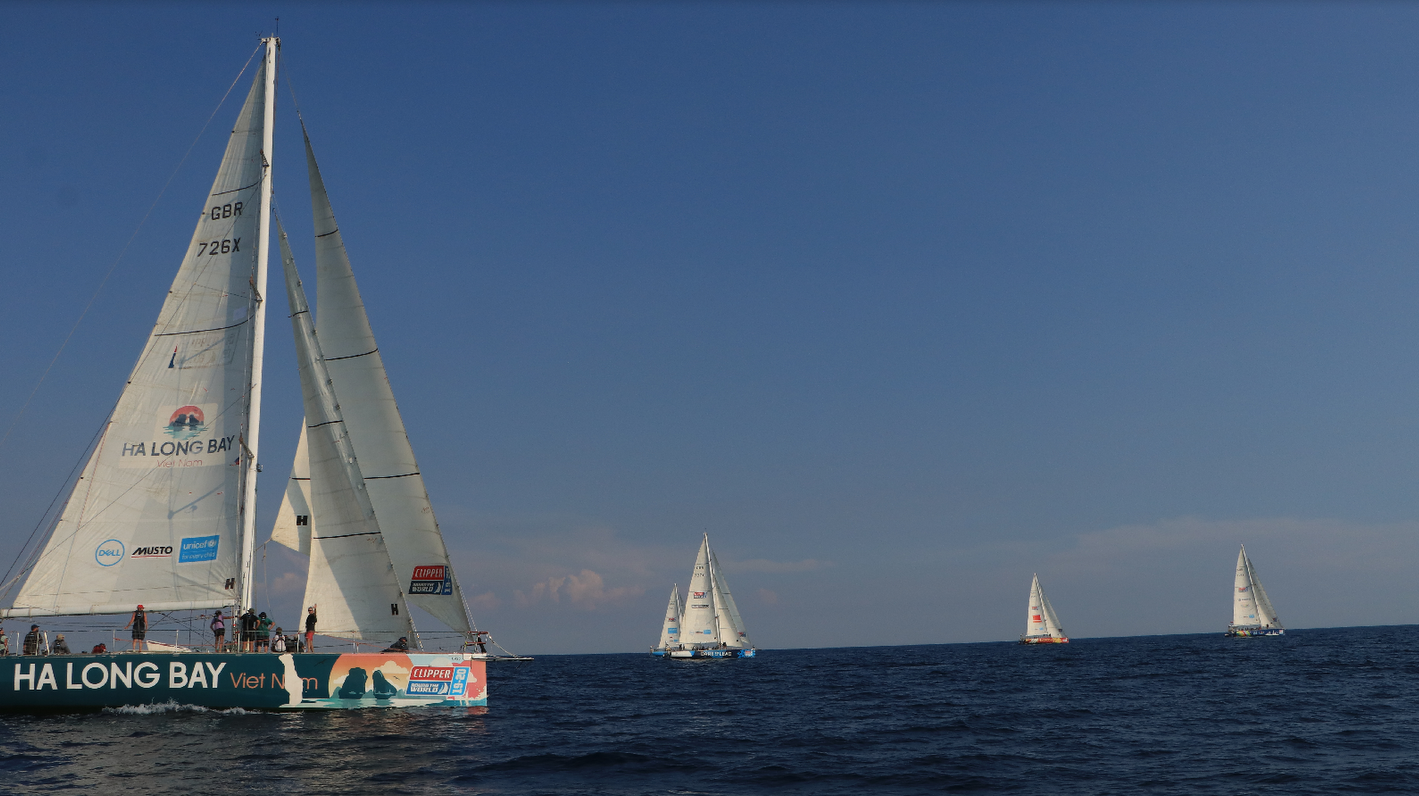 Sails are hoisted and the fleet is off!

The nominated Lead Skipper will be in the middle of the line up at position six. This is so that they can judge if the fleet is in a straight line.

The Lead Skipper will ensure that the yachts are lined up as fairly as possible for the start sequence.

The Lead Skipper shall call out the start sequence on a pre-arranged VHF channel.

The Lead Skipper contacts the Clipper Race Office within 30 minutes of the start, to confirm that the Le Mans start sequence has been successfully completed. They also include the position, official start time in UTC as displayed on the GPS, the weather conditions and any other relevant information (e.g. which yacht led, tactics etc.)

The sixth race of the current edition (Race 6: The Sanya Tropical Paradise Race) began with a Le Mans Start after the fleet had departed The Whitsundays. See footage of the action here:

Skipper Blogs 13 March 2022Rob GrahamImagine your KoreaImagine your Korea is heading back home to Subic Bay Yacht Club after a very productive training week. Old and new members of the team are working and living well together, and Imogen (team mascot) has been talking…

In photos: Refresher Training gets underway in Subic Bay, Philippines

Monday 7 March 2022After a busy few weeks of preparation, maintenance and Race Crew arrivals here in Subic Bay, all…