The Clipper Race teamed up with the British Embassy Beijing today to host a special panel discussion in Qingdao about gender equality, in support of the UK’s month long International Women’s Day campaign in China, Be Y♀urself. 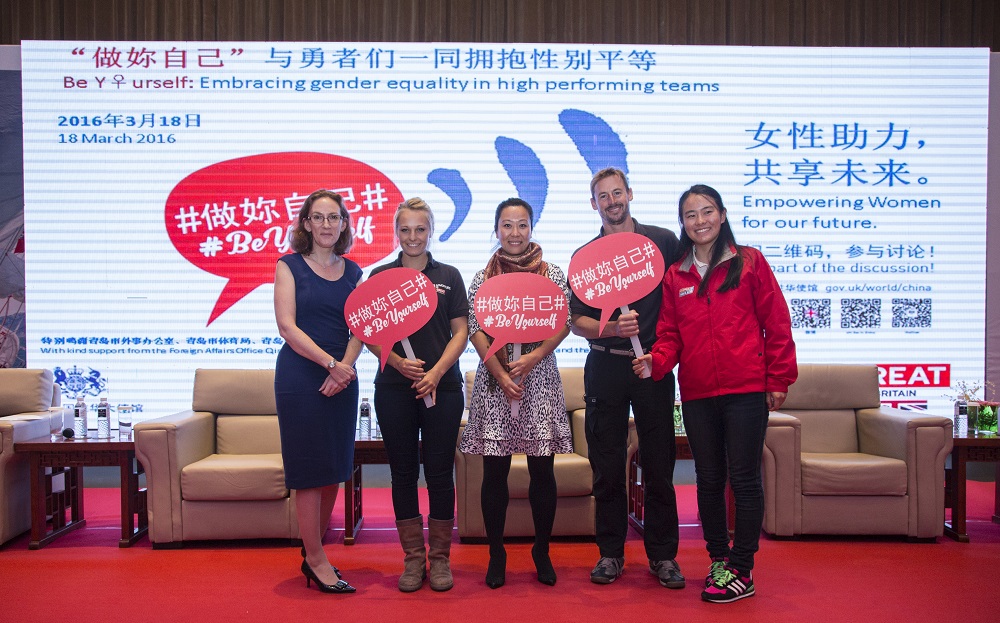 Chargé d’Affaires and Deputy Head of Mission in Beijing, Mr Martyn Roper made an introductory speech supporting the aims of the Be Y♀urself Campaign to an audience of 200 including important contacts from business and culture, students, and young aspiring members of the local sports community, as well as Clipper Race crew.

He said: “I am particularly inspired by the Clipper Race’s ability to connect us through the language of sport. Whatever our background, whatever our gender, whatever our nationality, we can all be inspired by sporting achievement. It brings together crew members from all walks of life. This is an ideal example of the core values that the British Embassy in China has been exploring with our Be Y♀urself Campaign.”

Sharing what the term ‘Be Yourself’ meant personally in her own life, Charlotte Evans told the audience: “I spent a lot of my life trying to proof that I am just as strong as any man and that I don’t need to be treated differently. The Clipper Race is a perfect example of gender equality as on our GREAT Britain boat, it doesn’t matter if you are male or female, everyone gets treated the same and had the same jobs and responsibilities. You can get involved in any part of the boat life you like as long as you show effort and a willingness to learn.

“After I finished the Paralympics I wanted to showcase to kids, and females, that you can do anything you want in life. You just have to go out and put the effort in work hard at it. I was petrified of deep water and I didn’t know at first if I would ever be able to complete the race but I wanted to set myself a challenge and decided to go for it and give it everything. Having completed my leg, I feel totally empowered and proud and I hope I can inspire others to do the same and chase their goals too, whether it be in sports or careers.” 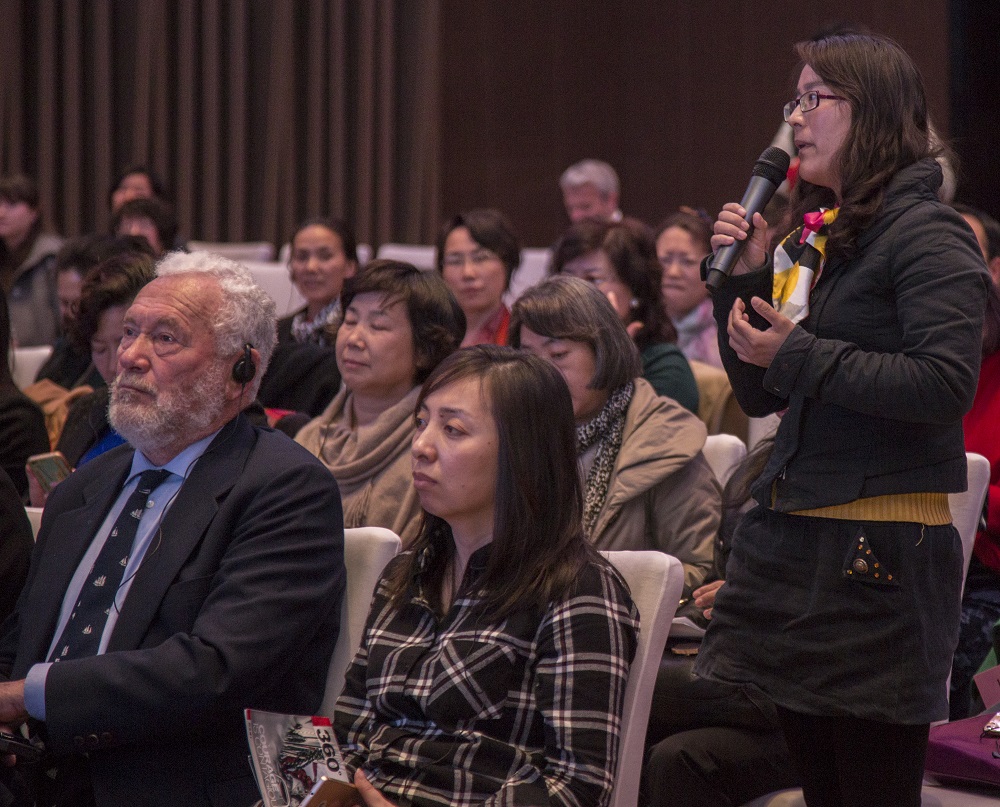 Qilin Wang talked about the challenges of being a female at the top of a traditionally male dominated financial technology industry, but how she defied pressure of stereotype by simply outperforming those around her, whether they were male or female.

Peter Thornton said he grew up in a household where he and his sister grew up being given exactly the same rights and options in life as each other and that a great respect had been instilled from a young age that people are equal and the only difference is how hard you fight for what you want to achieve in life. He shared his view that equality and anti-sterotype messaging should start not just at home as it did for him, but in schools from the very starting point in life in order to have best effect.

Many studies show that gender inequality holds back social development and economic growth. The British Government’s figures show that equal participation in the economy would increase the GDP of the UK by 10%. While, the McKinsey Global Institute calculates it would be worth an extra $28 trillion by 2025.

British Ambassador in China Barbara Woodward CMG OBE has made a personal pledge to be a convener of successful women in China. As the leader of one of the United Kingdom’s biggest diplomatic networks in the world, she has committed the British Embassy Beijing and Consulates around China to making a difference to the position of women in society and the economy.

Melody Liu, 20, was born and raised in Qingdao and has sailed here for the last ten years before being selected as the youngest Qingdao ambassador crew member, and just completed Leg 5, the Asia Pacific Challenge Leg: Melody, who counts Clipper 2013-14 Race circumnavigator Vicky Song as a personal role model, says: “Growing up I have sometimes heard people tell girls, stop, stop, only boys can do this. It is totally unfair and this gender discrimination can last a lifetime and end up holding you back. I am happy that my parents always supported me in my dreams and helped me get into sailing which I love.

“Before the Clipper Race I felt like a little girl, childish in many ways, but having spent 54 days at sea with a team of adults from all around the world, enduring tough conditions, I feel like strong like a woman, and more confident in myself. I feel like I can do anything now and I hope going forward I can build on this confidence and use it for positive gains in my life, and in the lives of those around me.”

The Be Y♀urself campaign has been designed to celebrate women’s ability to achieve whatever they want to achieve. The aim is to empower women to reach their full potential, challenge the stereotypes that persist about gender roles as well as raise awareness of the benefits of gender equality in society and female participation in the workforce.

Sir Robin Knox-Johnston also attended the event. A passionate supporter who enjoys any opportunity to encourage increased female participation in the race, he says: “The Clipper Race doesn’t recognise the difference between men and women. We accept people who have the wish and desire to sail round the world. 35% of our crew are ladies, and we hope that figure will continue to rise. I’m a big believer that equality lies in the mind and our crew demonstrate perfectly that regardless of your gender, it is confidence and mental strength that enables you to achieve.” 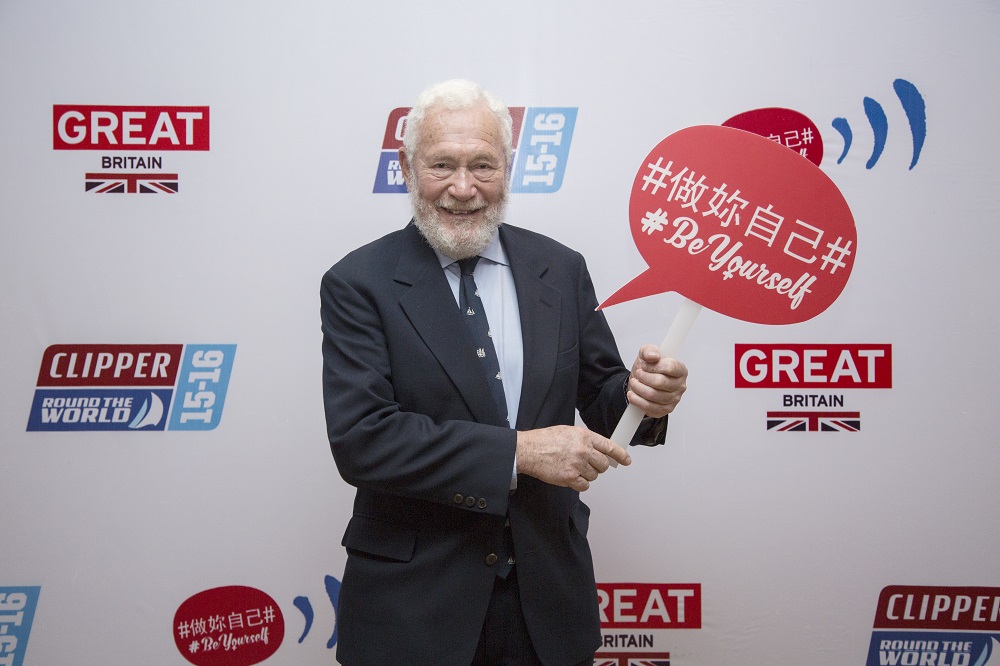 The Be Y♀urself campaign is running throughout March in China and as well as Qingdao, it has events set up around the country in Beijing, Wuhan, Guangzhou, Chongqing. Bodies including UN Women, the British Chamber of Commerce and China-Britain Business Council which covering subjects such as; women in leadership, women in international business, the role China’s new anti-domestic violence ruling will have in society, inspiring women, and women in sport, as well as a number of short documentary film screenings.

As the teams soak up the amazing hospitality and culture of our six-time Host Port, Qingdao, we hear from some familiar faces of Alumni crew members who have returned to take on the Asia Pacific Challenge and Mighty Pacific Legs, in aid of Unicef.Sixteen Alumni…