They say you can't teach a dog new tricks, yet self confessed 'old sea dog' Andrew who has decades of sailing experience is still learning new skills as he makes his way around the world on board Qingdao.

Find out how the Qingdao Ambassadors are adding to Andrew's experience and what surprising reunions and life lessons the race has bought him in the process.

What made you decide to do the Clipper Race in the first place?
I stopped sailing back in the mid 80s but in the 70s and early 80s I did a lot of transatlantic sailing. I joined the race for sailing reasons. I wanted to do the Southern Ocean and the Pacific Ocean – the two oceans I hadn’t yet done. And then I found that I had signed up for the whole thing. I guess I wanted to do it before I get too old, I’m 57 now, but I will be back in the 2017-18 race for sure. I want to do Leg 4 again as I enjoyed it so much. I’m actually looking forward to it already.

I met somebody at the end of Leg 3 in Australia, who will be coming back again in Leg 8, and we were in the same race, the Fastnet in 1979 so we raced competitively against each other over 30 years ago, and we’ve never crossed paths since but are now racing each other again in the Clipper Race. So I’ve come across a new friend. Our paths could have crossed and we’d probably have passed each other and never known. I’ve also met people even on this boat in this race from where I used to live back in the West Country, so a lot of familiarity around. It’s great.

We’ve heard how tough this most recent race into your home port was, how was it for you?
The storm was quite exhilarating actually, We were expecting some wind and we got the storm sail up and soon after a fishing boat came up and told us, “big storm coming” and they tried to chaperone us to safety, but we told them via our Chinese crew members on board, “no worries, we are racing in the Clipper Race. We’re trying to make it to Qingdao.” So they went away, and then they came back to wish us on our way, and big wind. Well we did get the big wind! It was more than expected. But it was fantastic. We got some good hard sailing on the helm. We had too much sail up at first and we had to take some down. It was great fun.

How does arriving into Qingdao sit within the welcomes you’ve experienced so far?
This is by far the biggest and the best. Da Nang was great too but arriving here in Qingdao has been absolutely exemplary. It sets the bar, I don’t think anything could match it. I know going back to London will be a different event entirely but I think here will be a real highlight for me. 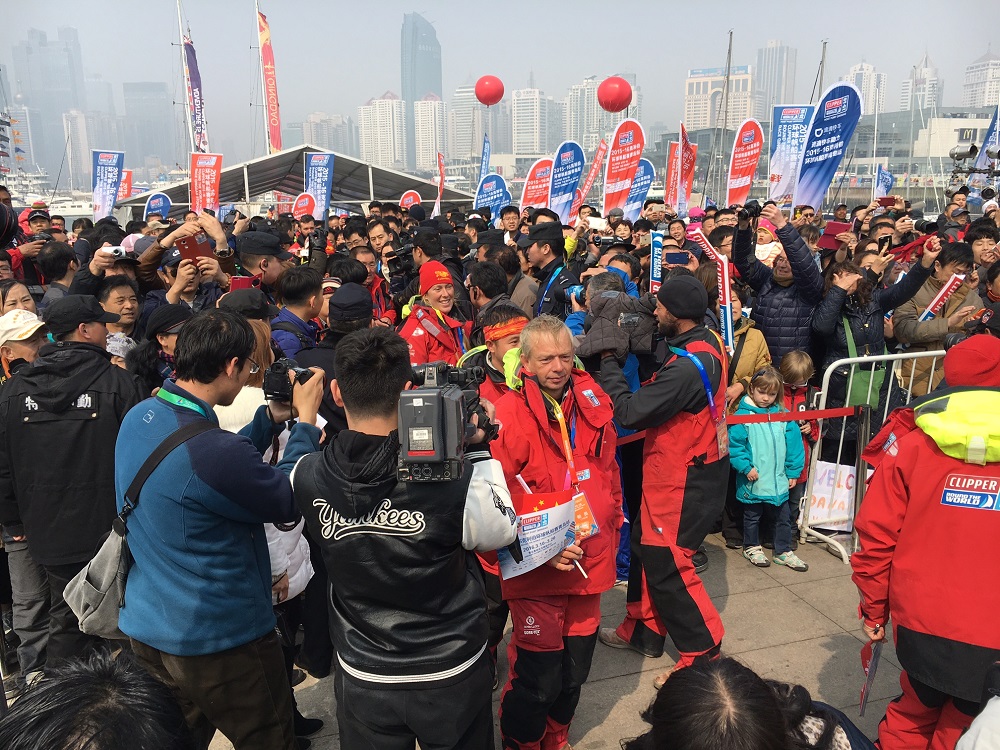 You signed up to do the Clipper Race for sailing reasons but do you think the experience has taught you anything surprising about yourself?
I have learnt things about myself along the journey, and I’ve been shocked. I left my wife in London for eleven months, and I was going down the English Channel when I picked up a text message from her in which she said, ‘you didn’t actually say good bye,’ and I hadn’t actually even realised. We’re both very independent people really but it is probably my biggest regret actually, that I didn’t say a real goodbye to her.

We’ve been married for 25 years and we’ve now bonded again since I’ve been gone we’ve been discussing things on email and on the phone when I get into port, and we’ve kind of been developing a unique relationship all over again. So she is going to come and see me when we get to Seattle, as she has been making best effort to get time away from the farm so it will be a big time for me, yea really big.

In that aspect this has absolutely been a life changing experience in a way that I hadn’t ever imagined really. But now, we’re talking in a way we’ve never really talked before and about things we should have been talking more about, and now we’re starting more of a dialogue on the phone and email, so it is going to be really big when we get to see each other again. I guess it has renewed our relationship.

I think I’ve also learnt to tolerate people better. I knew living in close quarters with people on the boat would be an issue for me but I think I’ve got better as we’ve learnt to understand each other more and appreciate our space, or lack of it!

Have the Qingdao Ambassador Crew added anything to your on board experience?
The Ambassadors are very much here as part of the crew and they chip in from day one. They’re fantastic and help make the experience even more special I think. I had Sean on my watch, the Phoenix Watch, on this last race. He really is a brilliant sailor. He spoke very little English and I speak no Chinese so shame on me but we bonded really, really well. Absolutely fantastic.

Melody, the Qingdao Ambassador on the other watch for this leg, she is also a really good sailor too and again, a really fantastic member of the team. They both made the race here for us and I’ll never forget either of them. I totally bonded with Sean. He has tremendous sailing skills and we mentored each other. I learnt from him and he learnt from me. I’m an old sea dog as well, so I really enjoyed the learning experience a lot. 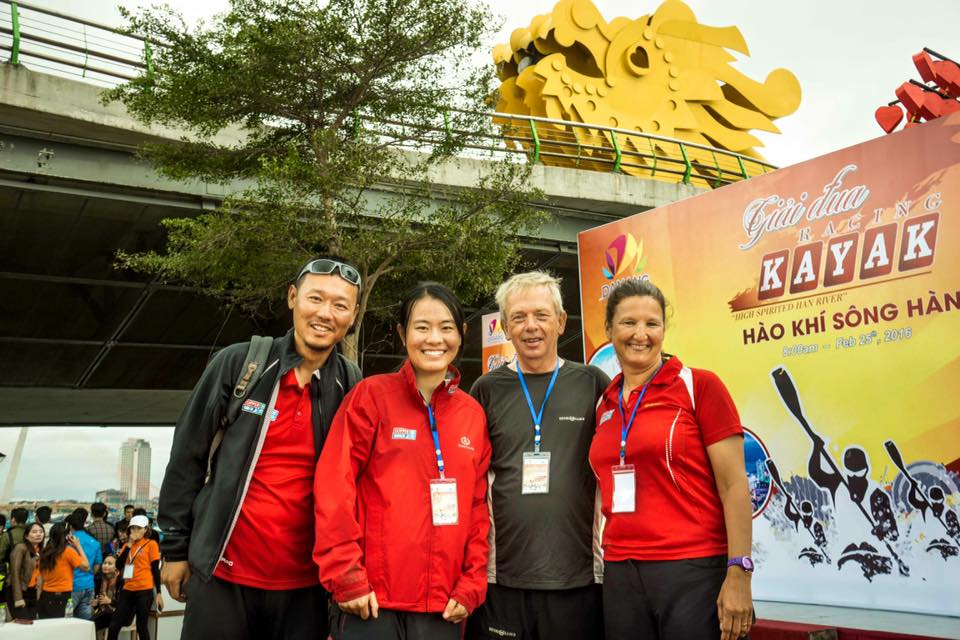 i think it is special to have the ambassadors on board as there is a real cultural exchange. They introduce their food to us, which we really enjoy. We’ve eaten loads and loads of dumplings, and we celebrated Chinese New Year which was great. Kevin, our media guy on board from Beijing TV, keeps everything going for us. When times are tough he is always there with a smile and I think with the change of crew on every leg is good. You get to meet a lot of different Chinese people and everyone has been really special in their own way. They are all really different. Also they are really proud to represent Qingdao, and they want to win and be competitive. They all race really hard so they bring a great spirit. It’s been great to have the Qingdao Ambassadors on board.

Has the experience been what you expected so far?
In some respects yes, though in some respects it has been a bit disappointing when we didn’t get the big weather we were hoping for. For me Leg 4 around Australia was fantastic, going up the Bass Strait we had some massive seas and some massive surfing at about 30 knots downwind which was really exhilarating. The bigger the better for me really, I love the tough stuff. I mentioned earlier but I plan to come back actually. I’ve been talking to the Race Office and I want to return to do Leg 4 on the next race. 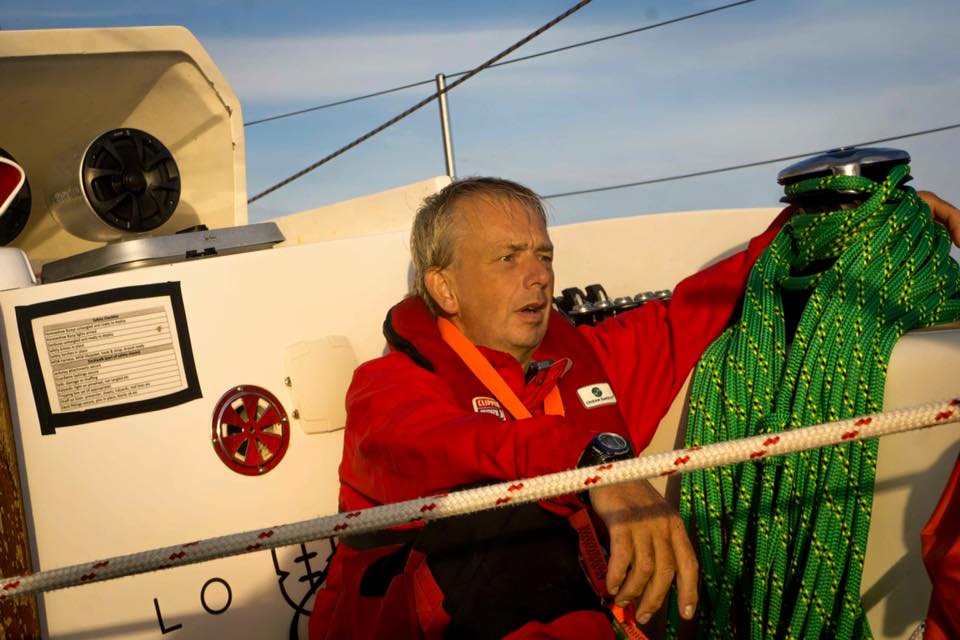 What are you looking forward to about the Pacific Ocean Leg coming up next?

I’m hoping for some big, big seas and some good downwind racing. I know we’re going to get some upwind as well. It is going to be cold to start with, coming into Qingdao it was brutally cold but we managed it so it’s a good taster of what is to come. It will be a big challenge, but a good challenge. I’m excited.

Want to join Andrew and race the world? We are currently training crew for the 2017-18 and 2019-20 editions of the race. Click here to request more information or an interview with our recrutiment team.

China’s Sailing City put on a stunning display for the arrivals of the first four teams into Qingdao, with delegates…