The fifth day of racing south on Race 2, east of Western Sahara towards Cape Verde has brought changeable conditions for the teams; with steady trade winds carrying the fleet on, to sharp increases in wind and reports of sudden changes in wave direction. For the crews this has tested their quick thinking and resulted in swift changes from their sail wardrobes, with Code 1 and Code 2 Spinnakers featuring heavily.

Currently leading the way towards Punta del Este, Seumas Kellock, Skipper on board Visit Sanya, China said: “Another cracking day under Code 2 Spinnaker. The wind has picked up a little since we’ve cleared the Canaries which has given us some surfs up to 15-16 knots, always followed by some whooping from on deck. It is great to see the crew all getting excited about sailing fast! Not only have we been sailing fast but the crew have been nailing these gybes, pulling them off without a hitch, people even getting up from their 8 hours of sleep to help (now that's teamwork).” The Chinese team are closely followed by Dare To Lead and Qingao.

Mike Surridge, Skipper on Imagine your Korea who are sitting around the middle of the pack, reports: “We had a great day sailing with some good positive winds fuelling our progress steadily south. We ran most of the day with our Code 1 Spinnaker, but changed as we ran into the evening to a Code 2 Spinnaker.”

Dare To Lead Skipper, Guy Waites comments on the conditions: “The Trade Winds continue to blow consistently day and night. Some slight variation in wind angle and/or speed but otherwise the same hour after hour. Each day or night is punctuated with a gybe, closing or diverging with the African Continent, the funneling breeze inshore. Our incentive to dive back in, trading places with the usual suspects on the leaderboard as we go.”

Currently on the leaderboard in fifth place is Unicef who have not only have eyes on their competitors’ positions but also on the wildlife. Skipper Ian Wiggin reports: “So far we have seen a fin whale, some white sided dolphins, many common dolphins - those stray cats of the sea - some turtles, some flying fish, a flying squid (that was dead on the deck, so may not count!), some mottled petrels, a manx shearwater and a small flock of storm petrels. Our eyes remain peeled, and our sharpies are poised over our whale watcher's poster, as we try not to let racing interfere with our research!” 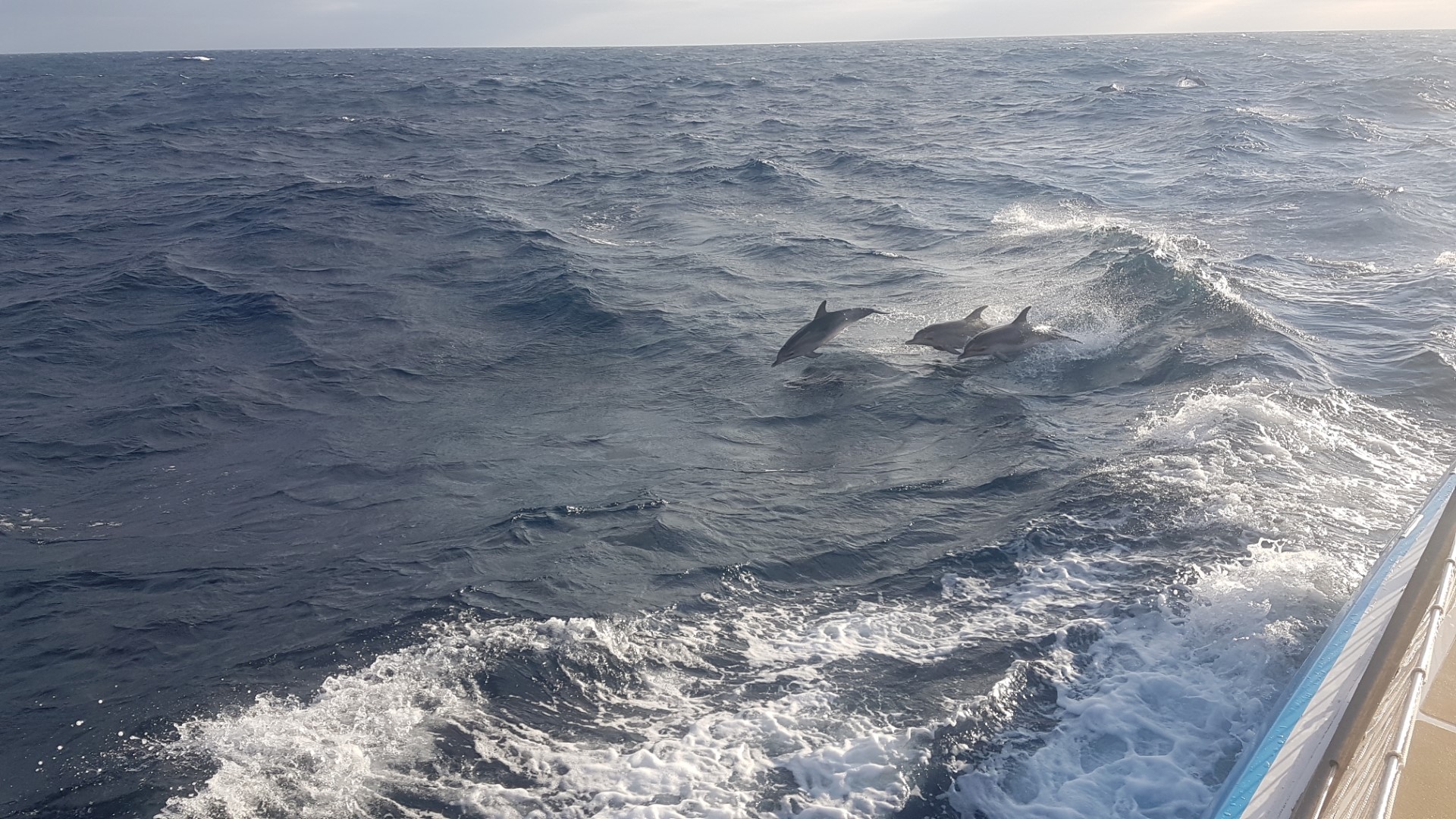 And where are Ha Long, Bay Viet Nam on the leaderboard? The team has chosen to appear in Stealth Mode, meaning their position is hidden from the other yachts and the Race Viewer so they can try out various tactical possibilities. While the public will be wondering where Ha Long, Bay Viet Nam is, the Race Office will be in contact with the team and aware of their position at all times.

This is the first time on the Clipper 2019-20 Race the tactic has come into play. All will be revealed as to how this has effected their performance and what decisions were made when they are visible again at 0600 UTC tomorrow morning (21 September), much to the relief of avid Race Viewer observers.

Picking up speed with a little healthy competition are GoToBermuda and Zhuhai, David Immelman, Skipper of GoToBermuda talks about how it is boosting the team’s enthusiasm: “I must admit when you are racing all alone, your concentration is never as heightened as when you can see your competition. It's all just numbers on a screen. So, as I am sure Nick would agree, boats go faster when they are close racing together. Good for us and our crews as they get more used to the racing excitement and commitment.”

As the teams accelerate towards Cape Verde, keep an eye on all the tactical decisions made by the teams as they decide how to navigate best around or through the islands via the Race Biewer and hear the crew’s thoughts from on board via the crew diaries.

On the fourth day of the Commodore’s Cup to Punta del Este from Portimão, the Clipper Race teams are unanimous that they have been welcomed by favourable sailing conditions as the crew surf their way past the Canary Islands south, with yacht speeds into double…

After an extremely tough first race, it is time to focus on Race 2: The Commodore’s Cup and the first…